After reading the review of the Nanoleaf Aurora smarter LED lighting system by Erin Lawrence on the Best Buy Blog last year, I was pretty impressed. I was a relatively early adopter of smart lighting, getting into it whole heartedly with my first Philips Hue starter kit in 2012. Since then, I’ve amassed smart bulbs and fixtures from a variety of manufacturers and in virtually every form factor. Bulbs, strips, fixtures, Bluetooth, Wi-Fi, solar powered, you name it ….

But nothing like the Nanoleaf light panels. Those flat, modular panels are unique in the smart lighting world. And they’re Canadian!

So when Nanoleaf sent me their latest offering—the Nanoleaf Rhythm smarter LED light panel kit (they recently dropped the “aurora” from the name)—you can bet I was excited to be trying it out. The basics remain the same as in Erin’s review. The kit contains nine white plastic triangle panels with a connection slot on each side. Connect panels using a linker to complete a circuit. Plug one of the panels to the control module and you’re golden. Attach the panels to a wall (or any surface, really) in any configuration you want, then use the app to light them up. You can even use Siri or Google Assistant voice control. They support 16.7 million different colours, have a 20,000 hour bulb life and you can add additional panels any time.

What makes the kit I received different from last year’s makes it an even bigger deal to me: the new Rhythm upgrade module. This turns an already cool smart lighting kit into one that can respond to music, putting on a light show to the beat of your tunes. I love music, I love technology, and I’m big into smart lighting. It’s a perfect fit.

Erin already covered this, so I won’t go over setup in too much detail. Basically, you use the Nanoleaf app to configure your light setup based on the number of panels you bought (I had the nine, plus an expansion three-pack for a total of 12 panels). You can have a maximum of 30 connected to one control module. You’ll need to download the app first, create an account, and connect the control module to your Wi-Fi network (2.4 GHz band only).

Stencils of the panels are included. Tape them to the target surface to ensure your design will fit properly and to give you a guide to work with. You’ll also want to make sure the control module and power adapter can reach a power outlet (Nanoleaf provides a generous length of cord that’s at least a dozen feet in total).

Next, connect the panels together on a table or the floor using the linkers. They slide together like a modular building set. Connect the control module and power supply to confirm everything lights up properly. This is also a final chance to look at your design to make sure you’re happy with the layout. Then use the included 3M Command tape to securely fasten the panels in their final position. That tape is technically removable, but adheres pretty solidly, so this is where using the stencils as a guide pays off. I accidentally dropped two tiles onto a hardwood floor from ceiling height and they survived intact (although a wall was gouged), so they seem pretty durable.

Once the panels are installed, the “work” part of this exercise is over and the fun begins …

Let There Be Light

Nanoleaf does a pretty amazing job with its panels.

It’s not just the fact that they light up so uniformly, or that they are capable of reproducing so many different colours. Most LED lights have these capabilities. Integration with digital assistants like Siri for voice control is also a nice feature, but increasingly common. What sets the Nanoleaf system apart is the way that the app is aware of your panel configuration so that light patterns play across the panels in a coordinated fashion—no matter how you have them set up.

Pre-configured colour patterns are offered in the app, and available for free download through the app. If you feel creative, you can also create your own. Or stick with picking a solid colour (with 16.7 million to choose from), and tweak the brightness or even temperature.

But the star feature of this latest Nanoleaf kit is that Rhythm upgrade module. Rather than being tied to the music being played from a smartphone, it uses microphones to detect music being played in the room, then applies “Rhythm” programs you select from the app to pulse the LED panels in time to the music. So it doesn’t matter what source you use, so long as you can hear the music.

How loud does it need to be to trigger the system?

During my testing, a music source located 10 feet from the Rhythm upgrade module had to be turned to about 55 dB of volume for the music to register, although it could be a little tentative; at 60 dB volume the action was fully responsive. To put that in perspective, 60 dB is considered to be typical of the background hum of conversation in a restaurant or office—so not particularly loud. 70 dB (which is twice as loud as 60 dB because this is a logarithmic scale) is the average level of noise a home vacuum cleaner will make.

With music playing, the Nanoleaf patterns can transform your room into a disco. It’s like having that old-school music visualizer from your computer playing across your walls. Put on softer music and choose a more subtle Rhythm program and the effect becomes much more relaxing. The panels still respond to the music, but without the frenzied pulsing. Between what’s provided by default in the app and what Nanoleaf makes available as free downloads, there is more than enough music visualization programming to suit any genre or mood.

The only issue I’ve run into with the Nanoleaf Rhythm system is that for some reason, the lights refuse to shut off using the iOS app. They’ll turn on instantly from the app, but not off. I have the latest app version and firmware, so not sure what’s going on there. However, there is a physical power button (and cycle switch) on the control module, so it’s easy enough to click to turn the lights off or use a Siri voice command until I figure out what’s going on.

If you’re looking for smart lighting that goes beyond the standard lightbulb to become actual home decor—and home decor that can seriously up your music listening game—you need to check out the Nanoleaf Rhythm smarter LED light panel kit. As for other options, Best Buy has you covered with all the latest smart lighting and smart home products. 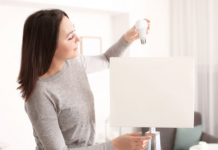 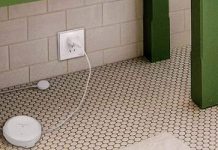 5 reasons to get a smart water detector 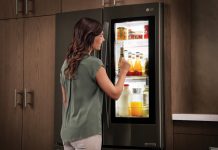