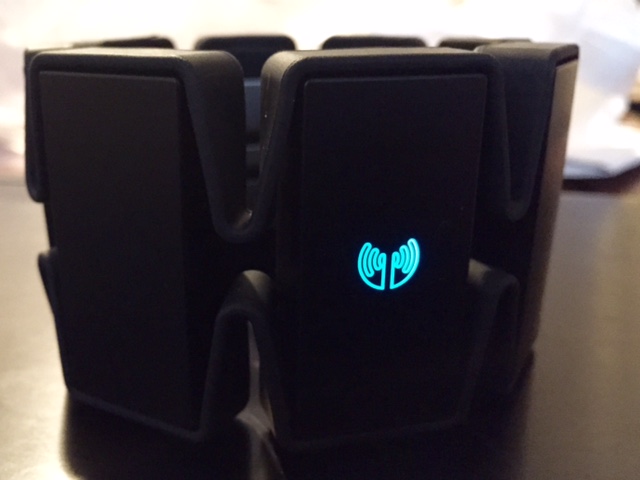 I’ve wondered for a long time how easy it would be to bring gesture controls to the home. We often see presentations and “Home of the future” type presentations where we see all kinds of magnificent technology based on gestures. While I’d gather that we’re a few years away from deviceless gesture technology, you can already see what’s coming down the pipeline. Gesture technology is already gaining popularity in robotics and even medicine. One of the biggest advancements in personal gesture technology is actually situated right here in Canada courtesy of Thalmic Labs, based out of Eastern Canada. You can even bring it home right now. Introducing the Myo Gesture Control Armband.

The Myo (Pronounced My-Yo as opposed to Me-O) Gesture Control Armband is a large looking, yet lightweight bauble that sleeves on your arm and allows you to control things with a few simple hand gestures.

Myo’s features are limited but growing right now. You can use it for your home computer (Macs too) or for your iOS or Android devices (depending on what you’re using it for.) Once you’ve charged it, you start it out on a computer where you must download the introductory software. You’ll use it to register your software, update firmware and learn how to use it.

How much easier could setup be?

That initial setup is very easy. In fact, I don’t think they could have made it easier. Registration, naming and everything important takes only a few moments and then you’re off to your syncing and gesture tutorial. Here’s where the growing pains will begin for most of you (more on that later) and how you will learn how Myo works. The armband must be placed on the widest part of your forearm, near your elbow. It also requires direct skin contact. Myo’s armband works by reading the electrical impulses in your muscles, so that’s why you need a wide and fairly muscular spot. Syncing is a snap and is as simple as holding your outstretched hand in the guided position until it syncs. Give it a few moments to warm up and then off you go. 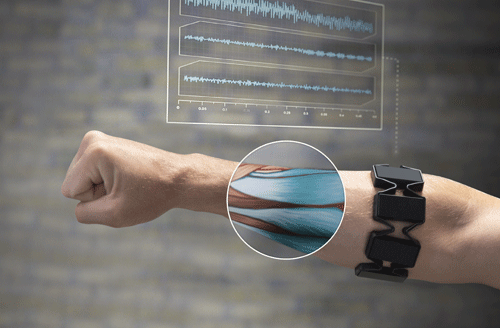 Choosing the hand to wear your armband is interesting. I’m right handed, so naturally I would have thought that my right hand would be the best to put this device on and go. However, as I went on through my testing, I realized that it was my left hand was best suited for it. I don’t know why this is, but it felt most natural on my opposite hand. You may feel the same way too, so don’t assume that your writing hand is the best choice to go with by default.

To “go” requires you to figure out what you want your Myo to do for you and for that, it’s worth visiting the Market on myo.com to see what’s available as “Connector” software. As mentioned, the features are a bit limited right now (but growing on a frequent basis.) Home users can do things like mouse control, act as YouTube and Netflix remotes and even play a custom designed shooting game which is a bit like Space Invaders or Centipede. Drone owners are in for a treat though. You can put your phone away for some of your favourite drones like the Ollie Sphero and Parrot AR Drone. Myo has functioning connectors with them. Unfortunately, I don’t own either drone any longer but here’s a video of how it works.

My favorite connector was the Myo Diagnostics program. With it, you can peer under the hood of Myo and see how it ticks and how it works. I’m very much into understanding the science and execution behind things and so this was right up my alley. I’d say that of everything on a personal/home basis, I spent the most time with this

Using it for work or play

The thing that interested me most about the Gesture Control Armband was its workplace practicality which I will touch on next. I’m just about to jump into a job fulltime where I’ll constantly on my feet giving a lot of presentations and training. I didn’t get to use this in any sort of training but I did install the Powerpoint Presenter and run a quick stats presentation with it. I admit that it was a bit distracting to those I was presenting to at first, but they got over it and watched the presentation. The really helpful thing about having a device like this is that it frees you up from having to sit down and drive with your mouse. You may use one of those clicker devices with the laser pointer but it still means that you’ll only have one free hand. Myo makes it so that you can keep both hands free while roaming around the room presenting. As a trainer, the ability to keep watch over my trainees is invaluable. While I work solely with adults, it’s still tempting to check social media or email or the news. This will allow me to keep my hands free to hold up visuals as well as progress my powerpoints successfully.

Now then, about those growing pains. There are both figurative and literal pains involved. The figurative pains center around the sensitivity of the device or what can sometimes seem like a lack thereof. You’ll probably have to slip the device on and off a few times and get used to how it Myo prefers to register your gestures. Every user will be different and will have a different learning curve. While Myo isn’t user unfriendly by any means, I would set aside a couple hours. Learn to use it on the really basic things (the Shoot game is probably the best and most fun way to learn how to use it) and then try to master more technical things like the YouTube and Powerpoint Connector pieces. 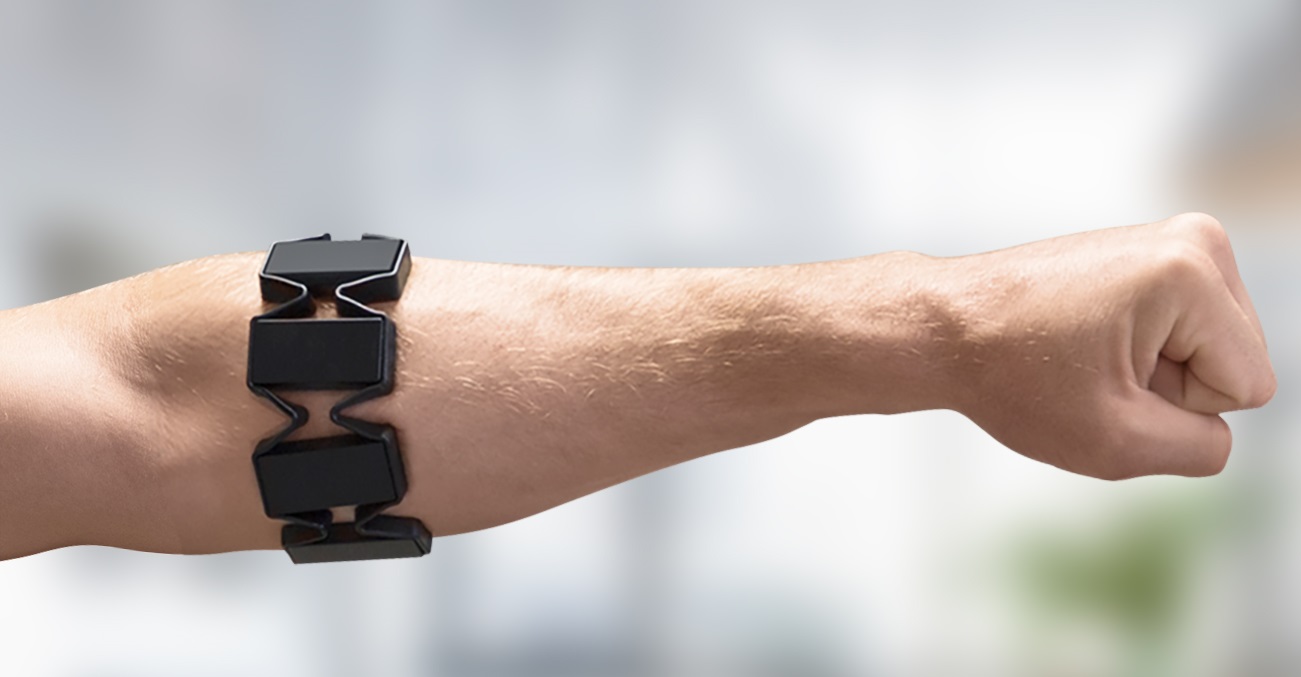 As for the literal pains, your arms will have to get used to using the Myo Gesture Control armband. I definitely had some muscle pains the first couple times I used it. I was definitely overexerting myself when I didn’t need to. To put this into a video game analogy – Do you remember the first time you played Dance Dance Revolution (if you’ve ever played it?) You had no idea what you were doing and by the time you finished a basic stage, it felt like you’d run a marathon. After time, you realized all you had to do was register on any edge of a sensor and you were good. It’s the same thing here. The first time I played “Shoot,” I was waving my arm about and going nuts on it, clenching the angriest fists and flinging my hands about like I was throwing fireballs in Street Fighter II. Eventually, I settled down and started using more subtle gestures and unsurprisingly, it responded better.

This will take some practice and some adjustment. You also need to re-sync the device anytime it senses major movement from its base (your arm.) To combat that and to ensure you have the right fit down, you’ll need to utilize the clips to make sure you have a proper fit. The bands itself are sturdy, yet flexible and should easily fit any forearm size.

I’ll be honest. Gesture Technology and the Myo Armband isn’t for everybody. While I wouldn’t hesitate to recommend it to anybody that was interested in it, I don’t think it’s all that practical if you’re just using it around the home right now (unless you’ve got the drones it works on of course.) If you’re doing a lot of presentations at work, or you want a great way to maximize your productivity there, give this a try. Myo got a lot of weird looks as I rolled up my sleeve and gave a Powerpoint presentation with it, but a few people at work afterward sounded really interested in picking one up. It beats a clicker and laser pointer, that’s for sure.

Now it’s your turn. The Myo Gesture Control Armband is available now and the only place you can get it in Canada is Best Buy. 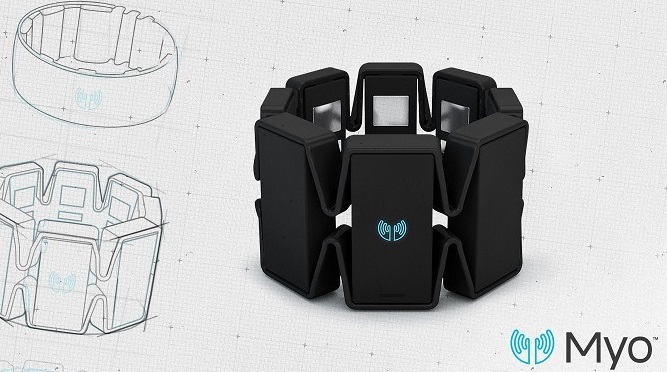