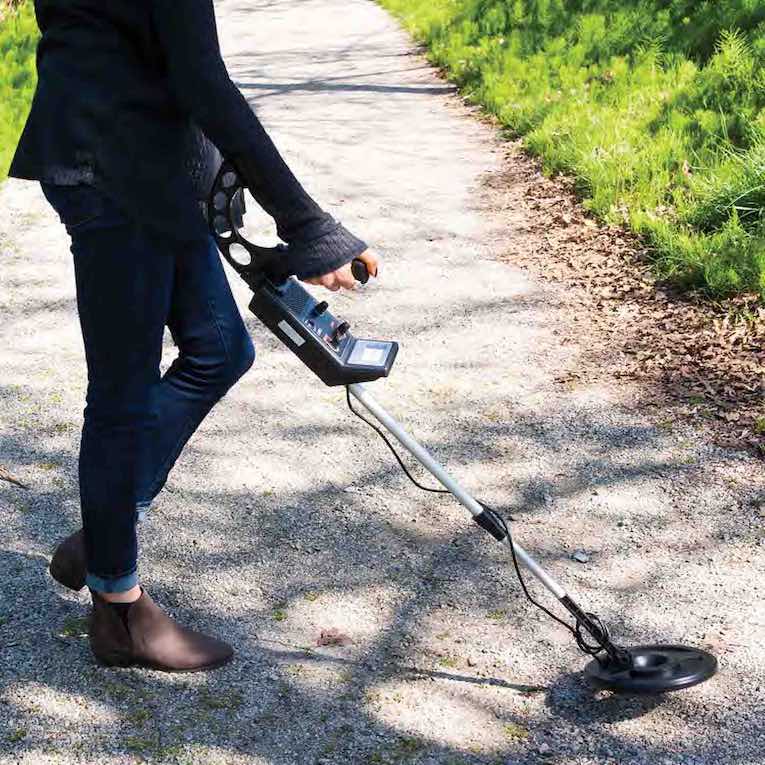 If you’re the adventurous type—someone that enjoys a good treasure hunt, for instance, then there’s a very high probability that you’re going to like the subject of today’s review. The product is the SuperEye S500 Metal Detector, and it’s really lots of fun to play with, whether you’re seriously searching for something of value or just having fun. I recently gave this device a whirl (both in a local wooded area & my own back yard) and found very little gold (as in none) but gleefully stumbled upon another kind of treasure: FUN! Keep on reading if you’d like to learn all about this cool metal detector. 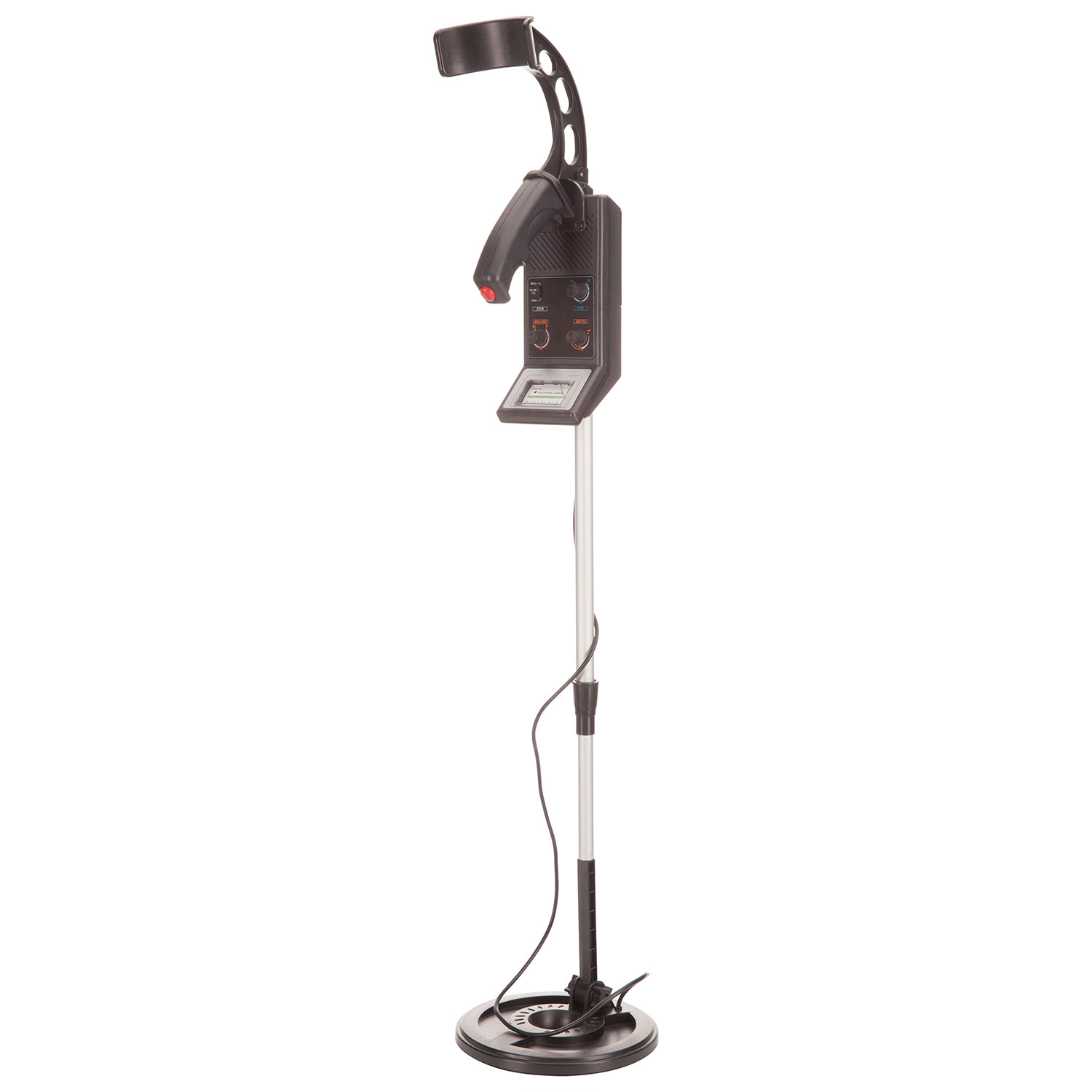 The SuperEye S500 Metal Detector is the one and only metal detector that I have ever tested or used, so I didn’t quite know what to expect upon first receiving it. However, as it turns out, this powerful device is capable of finding metallic objects (based on their size and metal type) at depths of up to 18 centimetres, and it features multiple operation modes, so you may choose to search for all metal types at once or instead by a specific target metal. This very useful feature is great for all those wishing to find valuable metals such as gold or silver without the nuisance of having to put up with hits for every other type of metal on the planet. The SuperEye is also adjustable (for length), so whether you’re short or tall, you can treasure-hunt in comfort, and it requires 6 AA batteries to operate. On a new set of batteries, you should get several (about 40) hours of running time with which to use your detector. Moreover, the search coil (which pivots for adjustment) is waterproof (so dew-filled grass isn’t a problem), and the handle features an extended forearm cradle that takes some of the detector’s weight (which is only 1.1 Kg anyway) out of your hand and spreads it throughout your forearm, adding some degree of comfort. 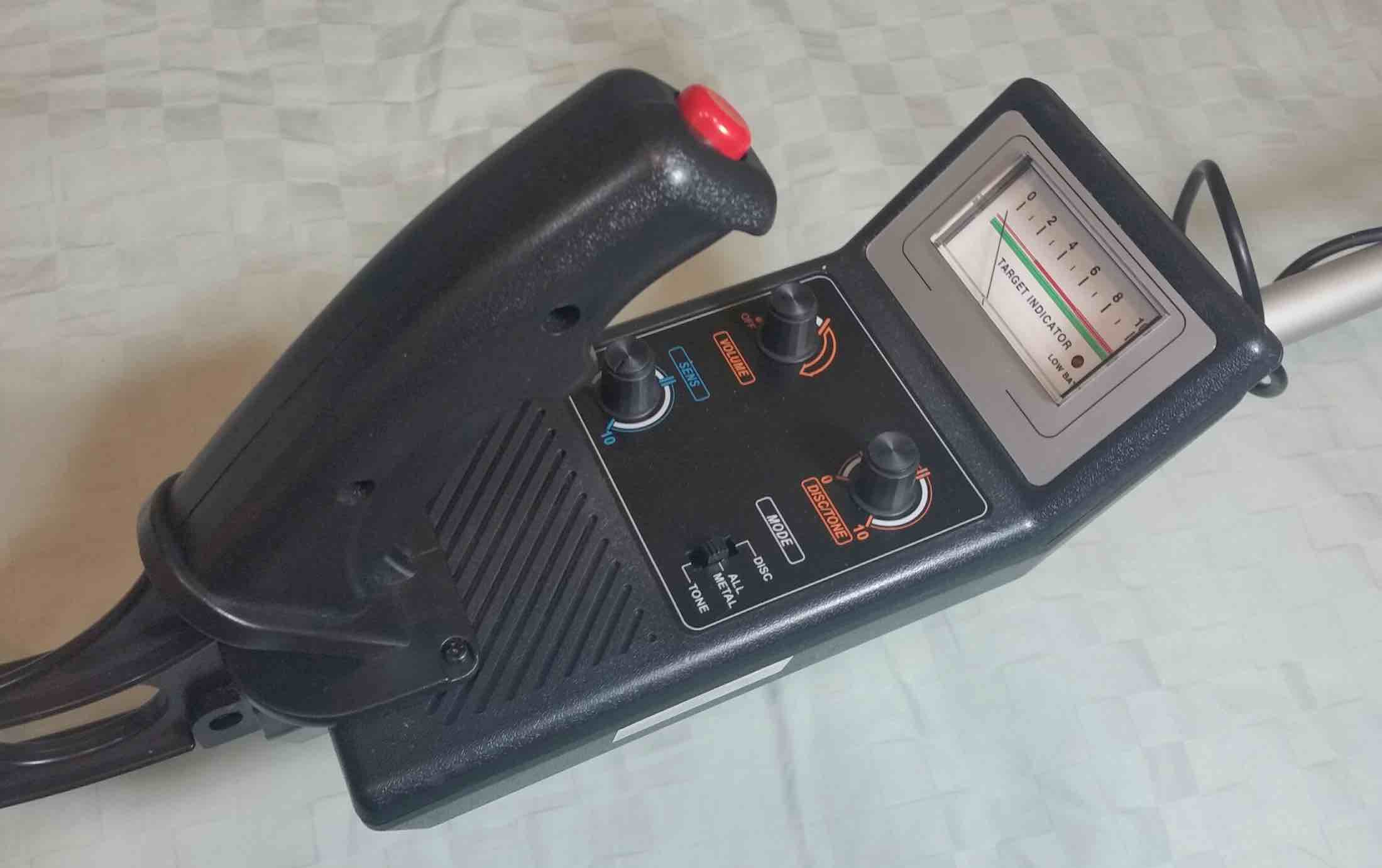 The SuperEye has a number of different knobs & buttons on its control panel (shown left), as well as a Target Indicator gauge (i.e., an analog display meter with a 1-10 scale, shown below), which has an indicator needle that jumps whenever you receive a positive hit. The needle jumps further up the scale according to the strength of the hit, and there’s also a Low Battery indicator light on the display. Additionally, an audible alarm sounds with every positive hit. Other knobs and buttons include an On/Off knob (which also serves as a volume control, so you’ll hear every hit), as well as a sensitivity control knob. There’s even an earphone jack so you can treasure hunt on a crowded beach without disturbing others. The 3.5 mm auxiliary jack even helps to direct & enhance sound when you receive faint signals (such as from deeper hits). 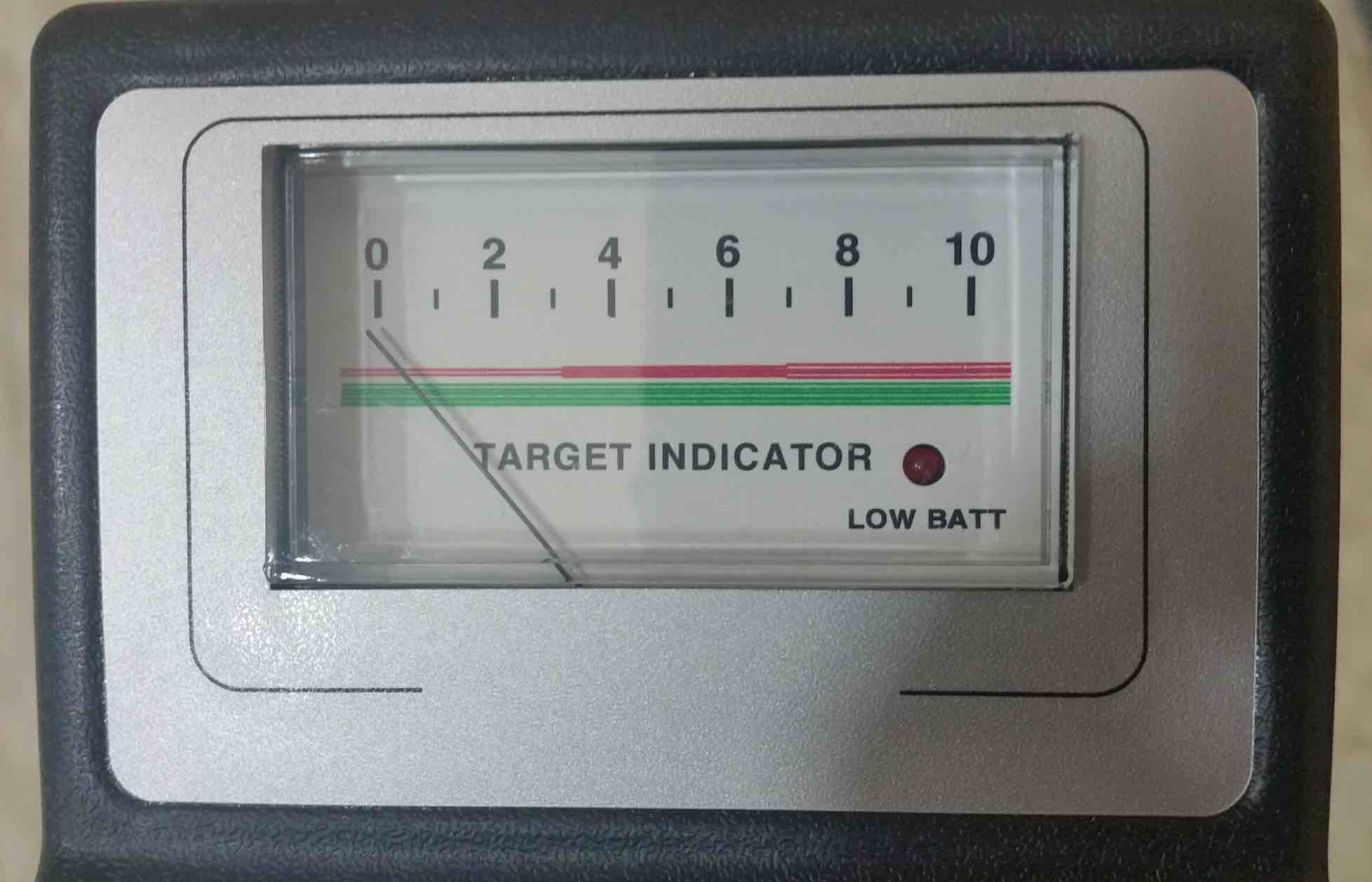 Ideally, I would have tested this metal detector on one of the numerous islands off Nova Scotia’s jagged coastline. There are countless places where stories of 19th century pirate landings suggest the possibility of long-buried treasure. War, shipwrecks, and a variety of other reasons could account for pirates not always returning to reclaim their precious loot, and I’d have loved the opportunity to test the detector in such a location. Unfortunately, I’m many hundreds of miles away from Nova Scotia at the moment, so I settled instead for a nearby wooded area where people like to hike, along with a fun backyard search. For a brief aside on why Nova Scotia would have made for great testing grounds, see the short (true) story immediately below.

[I personally knew of one chap who at 12 or 13 years of age (now nearly a century ago) dreamed every night of a specific spot on a nearby island where he would row over and begin digging—first coming upon an old-fashioned sugar scoop, next finding a perfectly intact can of yellow paint, and finally striking a bona fide treasure chest some feet below. After several consecutive nights of the exact same dream, he finally decided to put it to the test, so off he set to the island without telling a soul. When he reached the dreamt of spot, he immediately began to dig—first uncovering the scoop (used by his family for many years after), next turning up the can of yellow paint (subsequently used to paint his family’s shed), and finally… becoming so afraid of the possibility of finding a “late” pirate (left behind to guard the chest) that he temporarily left the location with a view to returning later on with help. Unfortunately, on every subsequent visit he ever made to the island over the course of a very long lifetime, he never again could find the exact location of his earlier expedition. Although the island he visited is not very large, the geography never quite matched its earlier self, and the treasure was never found. While this story may seem far-fetched, I personally knew the gentleman (now deceased) to be one of the most honest and trustworthy people for miles around. 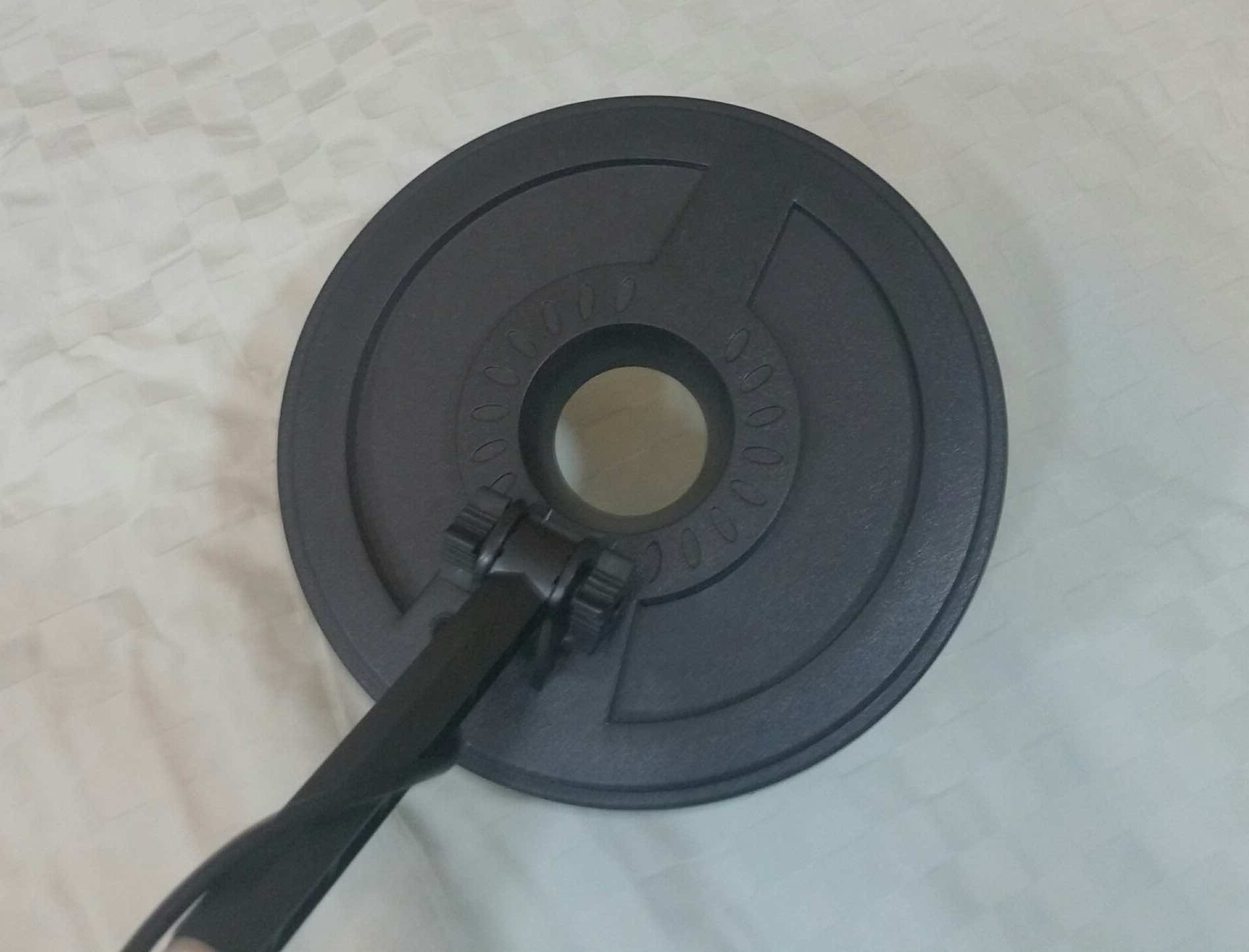 As for my own testing, I didn’t turn up anything overly interesting, but I did have a good bit of fun trying. At best I thought I might find some pocket change, a piece of lost jewelry, or an old piece of silverware, but no such luck. Still, I’m certain that the detector was working perfectly due to a number of planting tests I performed with it. For instance, I might hide something like a spoon under some blankets and see if the detector picked it up. I conducted several such tests with items of various sizes and with the detector set to a multitude of different strength levels. The detector worked perfectly every single time. Had I presently access to some of my favourite east coast islands, there’s little doubt that I’d be rolling around in Blackbeard’s treasure right now. Then again, the infamous Atlantic coast pirate may well have stifled me by burying his loot-filled chest deeper than 18 cms. Shiver me timbers!

If you’d like to get a look at the SuperEye Metal Detector in action, please take a few minutes to check out my brief video (skip to 1:08 to get down to business):

There’s no doubt about it, I really enjoyed testing the SuperEye S500 Metal Detector, and I do recommend it if you’re the right type of person for the product. In other words, someone who really enjoys being outdoors and creating your own fun adventures—be they ever so modest. Whether you find anything of value or not is somewhat beside the point. After all, the fun is in the looking. And besides, you really never know, you might just strike it rich!