Best Buy Blog
Home Wearable Technology Review: Stylish watch or amazing fitness tracker? You get both with the... 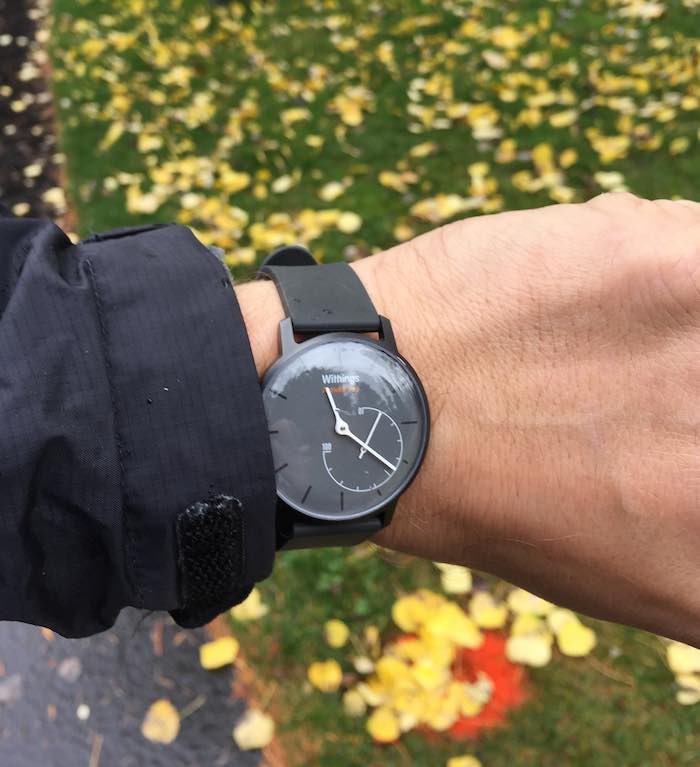 The Withings Activité Pop is a fitness tracker for people who want all of the health benefits and data from a tracker, but they don’t want to look like they’re wearing one.

My husband wore the Withings Activité Pop for 3 weeks, and he summed it up nicely when he said, “I like that no one walks up to me, looks down at my wrist, and asks how close I am to my goal or how many steps I took today. No one knows this is a tracker. It just looks like a great watch.”

And it is a great watch, but one that does so much more. Here’s why you should take a good look at the Withings Activité Pop fitness tracker.

Track your activities in style

Men tend to like large watch faces while woman prefer, for the most part, a slightly smaller look. The Withings Activité Pop caters to both preferences, and although it’s not as huge of a watch face as some guys prefer, it doesn’t look too thin on the wrist either.

The watch case is PVD-coated and the strap is made from smooth silicone, so it feels very lightweight when you wear it. The thin design is a nice switch compared to wide fitness bands, but as I mentioned before, the Withings Activité Pop really doesn’t look like other fitness bands. It’s stylish enough to just wear as a watch, and because it comes in a variety of colours, you can choose whatever band suits you.

The only downside to the thin silicone strap is that it tends to get a little sticky when you work up a sweat.

Simple, but packed with features 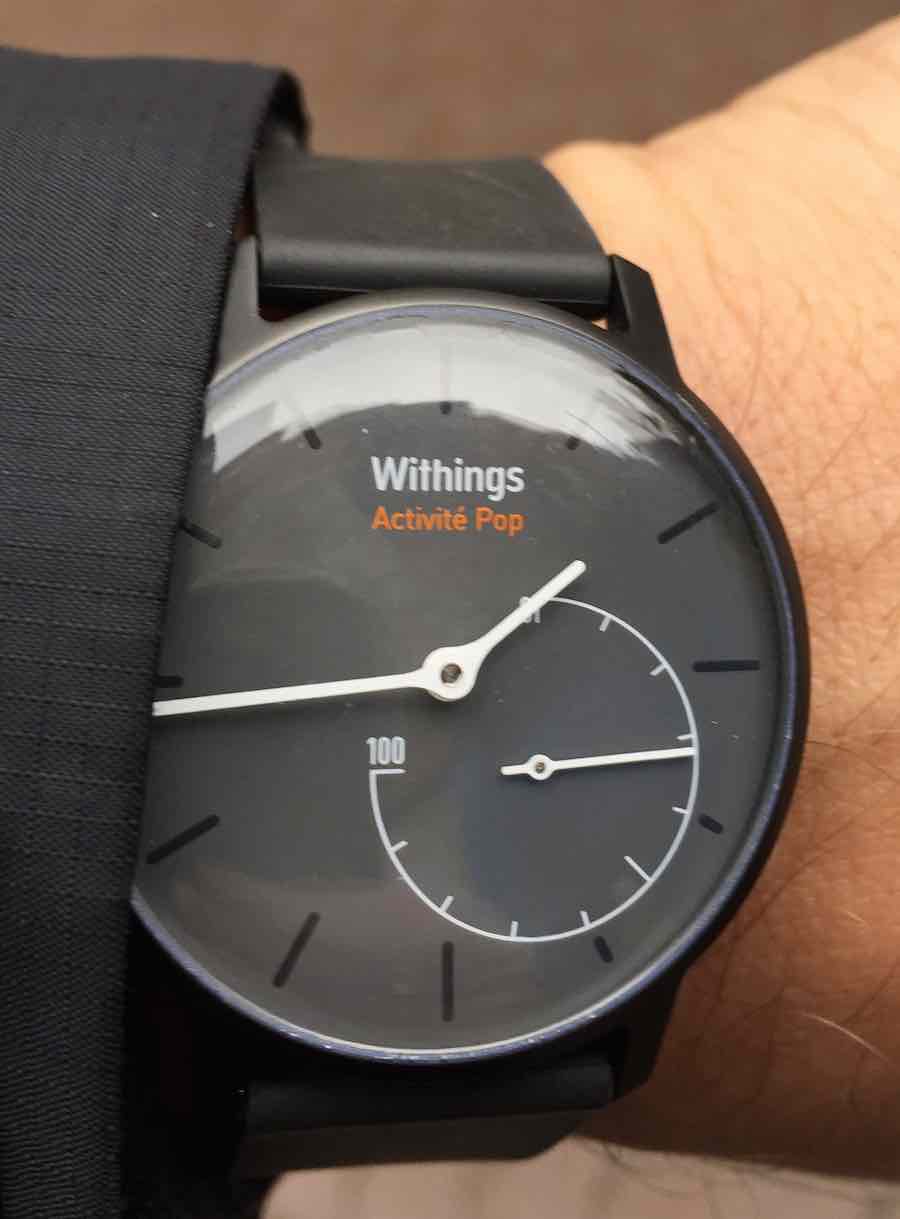 It looks just like a watch with an analog display, but it can do so much more. Here are a few of the features on the Activité Pop.

Worried about recharging? Don’t be: the Activité Pop has a long lasting battery that should get you 8 months of tracking before you need to replace it. That’s a great option when you’re used to fitness trackers that need to be plugged in every few days.

Putting the Withings Activité Pop to the test

When you have the Withings Activité Pop on your wrist, you have a lot of options: you can use just use the analog activity dial and watch it circle around until you hit your goal, or you can synch your data to the Withings Health Mate app and see your calories, intensity, and duration of exercise.

Track your activity with watch alone

To start tracking your activity via the watch, just strap it on and go. The dial will move throughout the day as your activity level increases, or it will slowly grind to a stop if you’re feeling like a couch potato. If you want to know your alarm times, just double tap the watch face. It works like a charm.

Track your activity with the Health Mate app

The watch itself is a simple way to track your activity, but to get the most of your Withings Activité Pop, the Health Mate app is the way to go. After you download it you enter your height, weight, and fitness goals. Once you’ve entered everything, the app and watch work together to seamlessly to create an overall picture of your fitness level.

During the 3 weeks my husband wore the Activité Pop, he tried a lot of different activities. Although the documentation on the watch says that it can be used walking, running, and swimming, it’s also very effective for mountain biking. Although mostly downhill, there were periods of intensity as he shuttled his bike back up.

As you can see from his activity data, the Activité Pop was able to accurately pick up those periods of intensity and translate it into time spent exercising. Each day that week he either ran or spent time on his bike, and he made his goal more often than not.

There’s no fooling the Activité Pop

Speaking of goals, this is one activity tracker that’s not easy to fool. I remember having a tracker a few years ago that would give me the same amount of points when I folded laundry or did house cleaning as when I would go for a run. While I agree that vacuuming can get your heart pumping, it’s not fat burning or fitness focused in the same way going for a run is.

The Withings Activité Pop knows the difference between mild and moderate intensity workouts, and you have to get moving to make your dial move. Why would you try to fool your fitness tracker? In my opinion, some days you just don’t feel like going for a run, but because activity trackers are so motivating, you also don’t want to not make your goal for that day.

I strapped on the Withings Activité Pop myself for a few days and went through my daily routine without adding exercise. I didn’t make the goal once, and I think that’s a good thing. That way you know you’re getting the most from your tracker and that it’s doing its job: helping you get fit. 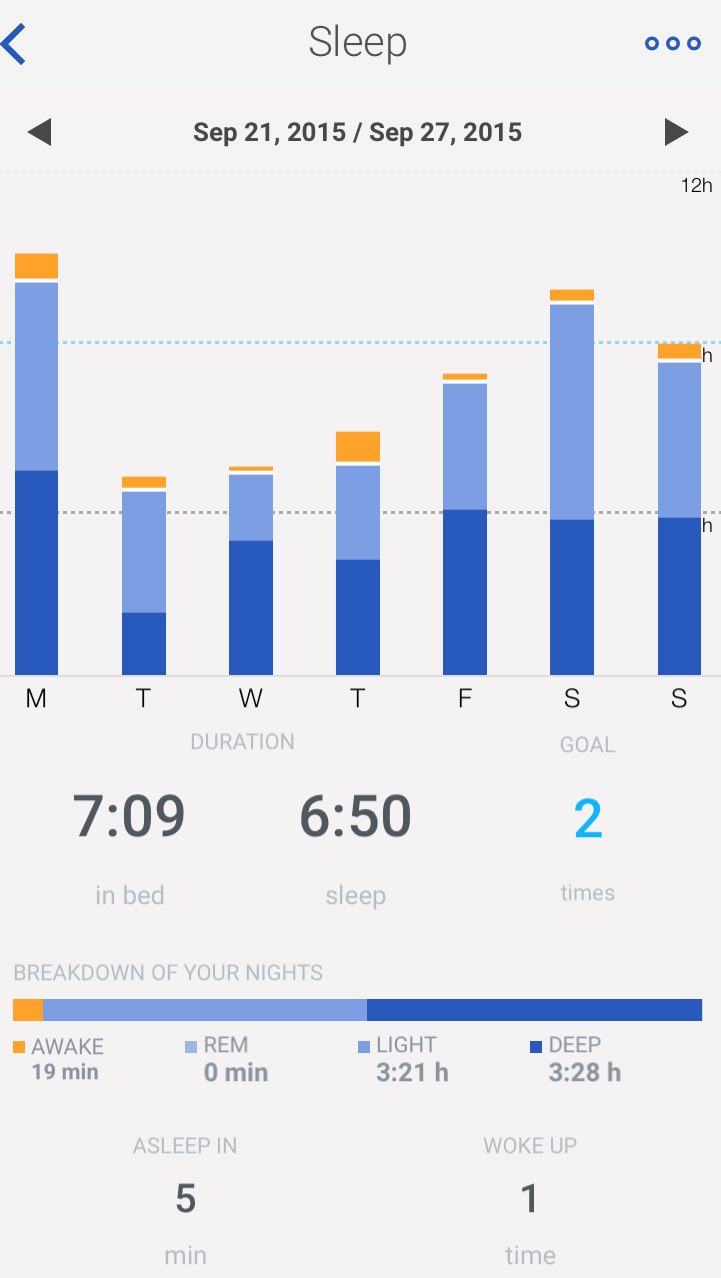 It’s been proven through research many times, and most people know that if you want to lose weight, you need to get a decent amount of sleep every night. With the Withings Activité Pop, you can tell via the app whether you are sleeping properly because it tracks your sleep.

In combination with the information the Withings Activité Pop watch is sending to the app, the app also has a few tricks up its sleeve. If you put your finger on the camera and tap pulse, it will effectively take your pulse right at that minute. It’s such a cool feature I definitely had sto show more than a few people.

The more data you give the Withings Health Mate app, the more it will give back to you. If you add the Withings Smart Body Analyzer scale, it will track your weight and body mass every day and use it with the data that’s coming in from your Activité Pop. If you watching your blood pressure as part of your fitness routine, you can add the Withings Wireless Blood Pressure monitor and it will import your data into the app.

Once it has all of the data, the Health Mate app will act as your coach and offer you suggestions on how to improve your health. It gives you a spot to track your food intake and you can choose which area of your health you’re going to focus on. It’s really one of he most in-depth fitness apps I’ve ever used, and it’s hard to imagine needing to get fit with anything other than your Withings gear and your smartphone.

Weighing the pros and cons of the Activité Pop 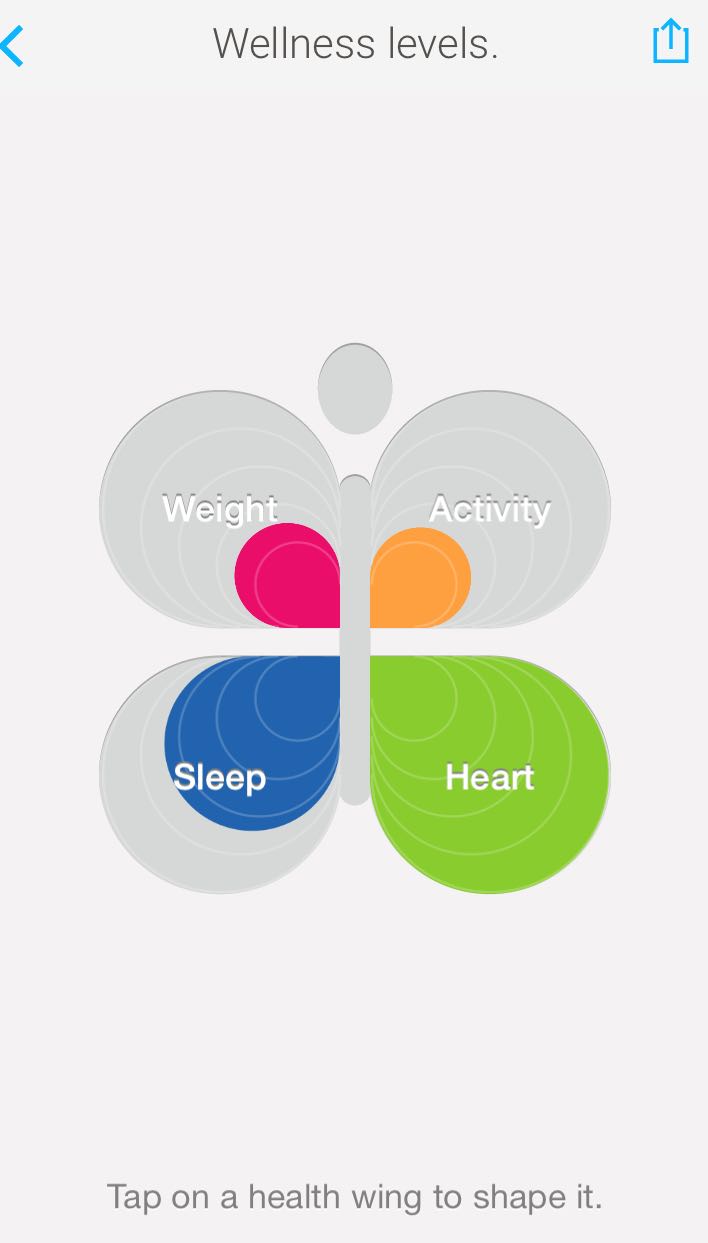 There’s a lot to love when you have the Withings Activité Pop. It’s a fitness tracker that hides itself inside a stylish and very versatile watch. The sleek, clean lines of the watch mean you’ll never get tired of wearing it, and it does its job as a fitness tracker on its own without you ever having to look at the app.

The Health Mate app also does a great job providing motivation, and it gives you such detailed data it can be hard to take it all in. The data is available via one screen so you can see everything all at a glance, and that’s great if you’re in a hurry and are just mildly curious as to how you are doing. If you’re really into data analysis, the Activité Pop delivers the goods with information even the most tech-savvy fitness enthusiast will love.

The only criticism I have of the watch is the band. It would be great if Withings offered an extra leather band to go along with the silicone strap. You could swap out one for fitness and one for every day wear, because the face of the watch is so nice to look at that you’d want to wear it on formal occasions where a silicone strap won’t do.

To sum it all up…

My husband had a lot of fun with the Withings Activité Pop, and it really did give us a peek into how fit and healthy he is. Because it’s accurate, provides a lot of fitness and lifestyle data, and looks amazing on the wrist, he’d definitely recommend one to friends.

You can find your own Withings Activité Pop right now on Bestbuy.ca.