It’s easy to find a Bluetooth speaker these days, but not always effortless to find one that delivers consistently good sound. That becomes more of an acute consideration when size is a factor. The Sony SRS-XB3 is small enough to wield almost anywhere as a travel companion, yet boisterous enough to keep a small party entertained. With water-resistance and the ability to sync two speakers together, there is a lot to like here.

It’s understandable to measure expectations with smaller Bluetooth speakers. The lack of real estate and the way audio physics work can only provide so much in a more diminutive package. And yet, the technology has improved to a point where some speakers sound positively dynamic, in spite of their limited frame. I got that sense after listening to the SRS-XB3 for a couple weeks. There isn’t much to the overall design of the speaker. It’s typical small Bluetooth — a rectangular frame with a grille in the front covering two 1.9-inch drivers. The rubberized body is soft enough to maintain a grip when carrying it around (it weighs 2.1 pounds), and all buttons are situated at the top — power, speakerphone, Bluetooth, volume, Extra Bass and Add. An NFC tag is in the middle for quick pairing with compatible phones and tablets.

The back has a woofer in the middle, with a compartment to the side that houses the power plug, 3.5mm Aux input, reset button and a USB port for charging mobile devices using the speaker’s internal battery.

An IPX5 rating means the speaker is water-resistant, rather than waterproof. Water splashes won’t hurt it at all, but this isn’t a speaker to dunk in the pool with you. Even more than that, if saltwater splashes onto it, rinse it with clean water right away or else salt and sand could penetrate the tiniest crevices inside.

I should mention battery life off the top because it can vary quite widely, depending on what the speaker is doing. Wired playback through an Aux-In cable will take less than streaming through Bluetooth, but the real drainer is volume. Like any speaker, the louder you go, the shorter it pumps out the tunes. Sony claims 24 hours on one charge, but that’s probably on 50% volume. Crank it up much higher and that claim is easily cut in half or more. It will shut down on its own after a period of inactivity, so the battery is protected from further loss. 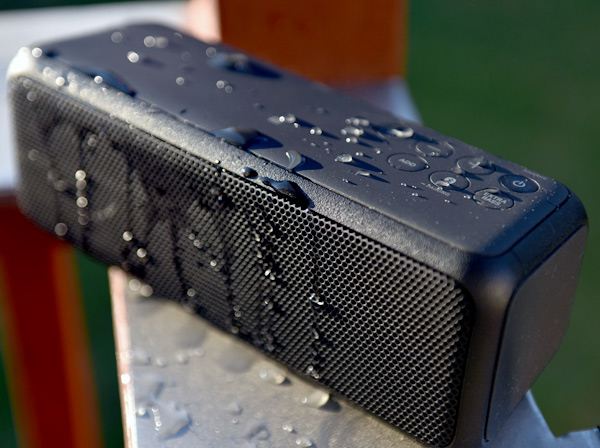 For a small speaker, though, the SRS-XB3 can really hold its own. It can get loud — real loud — at its highest volume levels. The impressive part, for me at least, is in how balanced the sound is. Sometimes, manufacturers skew too far within the audio spectrum, making a speaker sound too bass-heavy, or too tinny because the lows aren’t punchy enough.

The SRS-XB3 was a nice middle ground, belting out music that sounded like it didn’t stray too far, one way or another. The benefit of that kind of balance is that certain musical genres don’t suffer because of it. I found bass to be perfectly fine for house and hip hop tracks, but I imagine people who want even more will immediately press the Extra Bass button. Personally, I didn’t care for it that much, and used it sparingly.

Even on the other side of the spectrum, the highs and mids weren’t piercing my ears. Vocals came through with warmth, much like instruments did. Subtle tones and nuances aren’t easily distinguishable in smaller speakers, which is okay, but I felt there was some good depth here.

The lack of distortion as the volume went up was a nice surprise. It’s been my experience that speakers generally have a tipping point where distortion suddenly barrels through the speaker, affecting playback in a negative way. Not really the case here, but that’s not to say there aren’t any signs of it when you really crank it up. The further away you are from the speaker, the less obvious it is, mind you.

I should point out that phone calls are a letdown. The person I was talking to sounded okay, but I never did, unless I put my face closer to the unit. When I didn’t, I was told my voice trailed off or sounded far too distant, evne though I wasn’t far from the speaker to begin with.

This is a neat feature that has been done before, but in light of the impressive single-handed performance, I was curious to see what would happen if two SRS-XB3s were paired together.

The process to do it could feel a little more seamless than it is, but here’s the gist: My phone was paired with the first speaker. I powered on the second speaker. I then pressed and held the Add button on the first, did the same with the second, and after some flashing, each speaker had a corresponding light — L (left) for the first, R (right) for the second. The pairing now created a stereo setup where each speaker played on a separate channel. While it seems smooth enough in my description, it wasn’t especially so in practice.

At any rate, doing this paid immediate dividends for two reasons. First, I didn’t have to raise the volume as much, thus saving battery life, and second, the audio quality spread out further with greater impact. To cover a backyard filled with 20-30 people wasn’t hard when the speakers were spread out and at a higher volume.

Another option was to mirror the two speakers, meaning they would be independent of each other when playing the same music, so that it became easier to spread them further away from each other to cover a wider area.

I came away impressed with the Sony SRS-XB3, and would not hesitate to get one if I had a need for a Bluetooth speaker that I could use indoors and out with little to fear. The audio fidelity is terrific for its size, and the water-resistance adds the kind of peace of mind other Bluetooth speakers don’t have. It’s not a necessity to go with two units for the paired stereo effect, as it will do more than well enough for smaller gatherings or hanging out on your own.

The Sony SRS-XB3 is available now, and comes in black, blue or red.