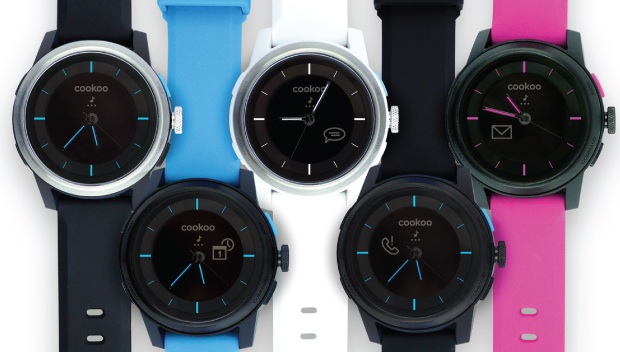 Cookoo is another Kickstarter success story, following in the footsteps of the . The big selling points of the Cookoo were its round, analog look (more like a traditional wristwatch than something high tech) and a unique proposition among its competitors —no need to recharge the battery.

The smart-looking watch obviously hit a chord with fans of wearable tech and more than doubled its Kickstarter goal in 2012. Now the Cookoo is in production and you’ll see it soon on shelves at Best Buy. 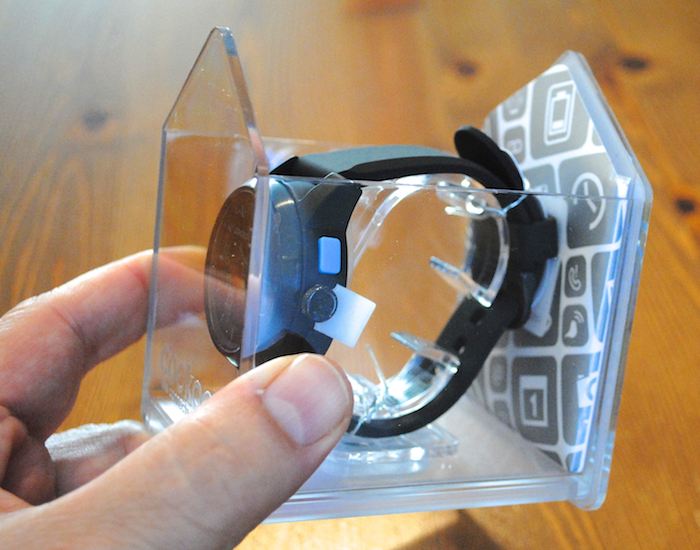 With the market rapidly filling up with smartwatch options, Cookoo is trying to stand out from the crowd. Part of that effort is the clear plastic box, which evokes a cuckoo clock. Inside are the watch itself (batteries are included (yes, I said batteries —more on that later), along with a spare rubber gasket and instructions.

Cool looking box, but it was a little torturous to extract the watch. Think any kid’s toys, with the hidden plastic twist ties and you have the picture.

But once freed of packaging, the Cookoo is a very attractive piece of gear.

The review model I was sent was black with blue accents. The face is made of scratch-resistant glass, the bezel is stainless steel and the case is plastic. The strap is silicon with a metal clasp and fits quite comfortably, although I had only one notch left before it would be too small for me to wear. It’s very light and although thicker than a standard wristwatch, at 16.3 mm, it’s not particularly chunky.

This smartwatch is also water resistant (that’s the reason for the spare rubber gasket). 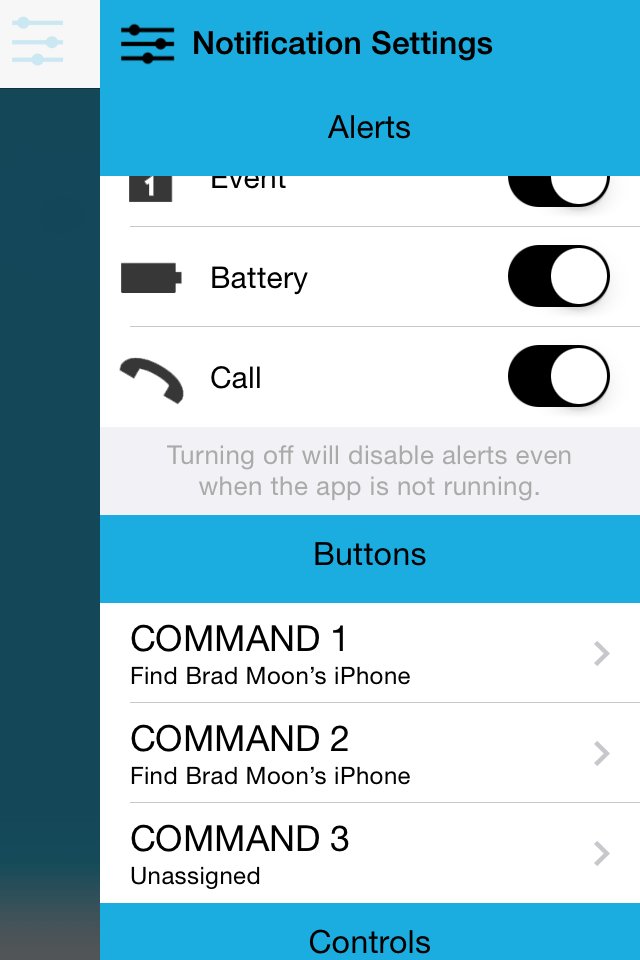 There’s not a whole lot to setting up the Cookoo.

The batteries are already installed, so all you need to do is set the correct time using the traditional dial on the side. Download and install the free app on iOS or Android (iOS 7 and Android 4.3 are the minimum). It may take you a few moments to find it —on iTunes, it’s not listed as “CUCKOO” as indicated in the instructions, but I found it as “CONNECTED WATCH.”

Next, hold down the CONNECT button on the watch for a few seconds, wait until it shows up on your smartphone or tablet and pair it. You’ll be asked to create an account for private notifications, but that’s not a requirement. There’s a COMAND button you can program to trigger specific events. I have programmed to “Find my Phone,” which seemed to be the only option available (although others are mentioned in the instructions, including Check in on FaceBook and Take a Picture).

Everybody knows the drill by now on the kind of things a smartwatch can do. Paired to a smartphone or tablet using Bluetooth, it typically displays notifications or reminders and lets your control certain functions on the mobile device.

The Cookoo does things a bit differently.

Instead of an LED display that provides some detail, the Cuckoo’s display has backlit icons that light up to indicate an alert —an envelope when you receive an e-mail, for example and a flashing battery icon when your smartphone is running low on juice. It can also vibrate or provide an audible alert to indicate receiving an alert.

This works pretty well. Chances are, once you receive a notification, you’re going to want to check your phone for details anyway, so not having anything more than an icon would be fine for many users.

The problem I found is some of the icons are very small and they’re not particularly bright. 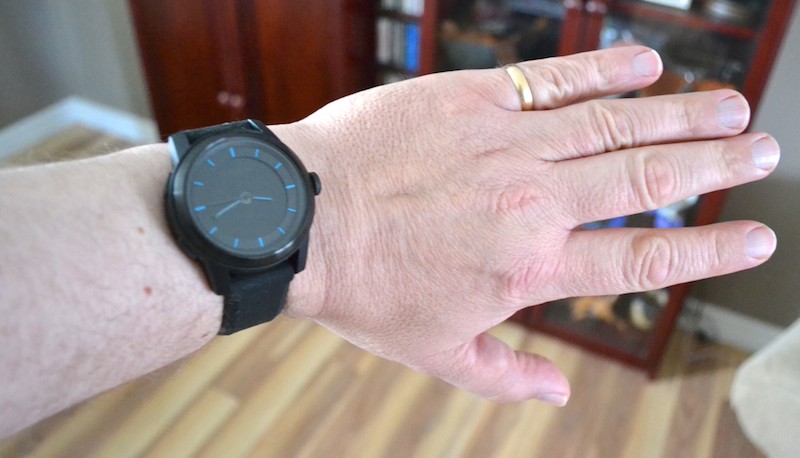 I was able to control playing music on my iPhone, but it was limited to playing and pausing. The “Find Your Phone” feature is kind of cool —push the button and your connected device starts making a “cuckoo” sound, so long as it is within Bluetooth range (roughly 10 metres).

One of the biggest complaints about smartphones is having to charge them. With such a tiny and high-powered device, a rechargeable battery just doesn’t last that long. A few days is the standard, maybe a week for some.

Once again, the Cookoo is different. It uses no rechargeable batteries. Because it’s a relatively “dumb” smartphone —in other words, it’s not running apps— and it uses those icons instead of powering an LCD or OLED display, it can get away with using standard watch batteries.

It uses two button cell batteries: one to power the analog watch movement, the second for the Bluetooth and display. The first should last three years, the second, one year of typical use.

Plenty of Potential, But Not Fully Baked Yet

I wanted to really like the Cookoo. It’s an attractive watch, I love the fact that it combines the old-school analog look with high tech functionality, Not having to worry about recharging? Yes, please. It’s affordable, too. Those are a lot of pluses. 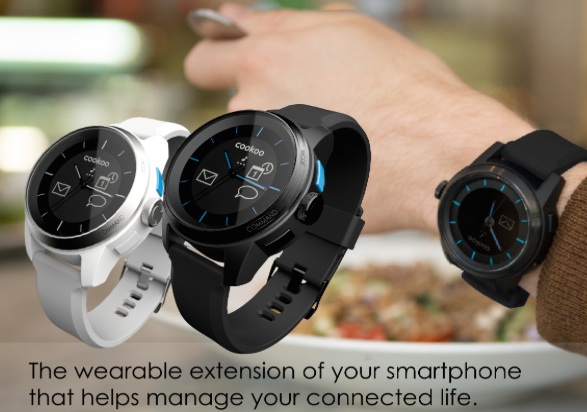 But despite the promise, the Cookoo isn’t perfect. I would prefer the icons be brighter and some need to be larger. Functions don’t all work in iOS —e-mail notification is listed as “Coming soon,” for example (the Android app appears to be a Beta version specific to the Samsung Galaxy S4, so I’m assuming some challenges there too). If you want to play a game on your watch or use it for a microphone with your smartphone, you’ll need to move up to a more expensive device.

However, Cookoo is providing APIs to third party developers and seems committed to extending functionality. If the company is successful and the watch lives up to its promised one year battery life, this smartwatch may well be the affordable alternative that attracts a mainstream audience. It has the potential to get better than it is now as features are enabled and new apps are released.

And if all else fails, it still has that Japanese movement, analog timepiece to fall back —something not many other smartwatches can boast of.

For those looking for a step up from the Cookoo in a smartwatch, the Cogito is also coming soon to Best Buy.

The same no-charge, dual-battery strategy but the Cogito is a more sophisticated-looking timepiece

You can find both the Cookoo and Cogito smartwatch at Best Buy. In the meantime, you can see all the latest and greatest smartwatch offerings in store or online.