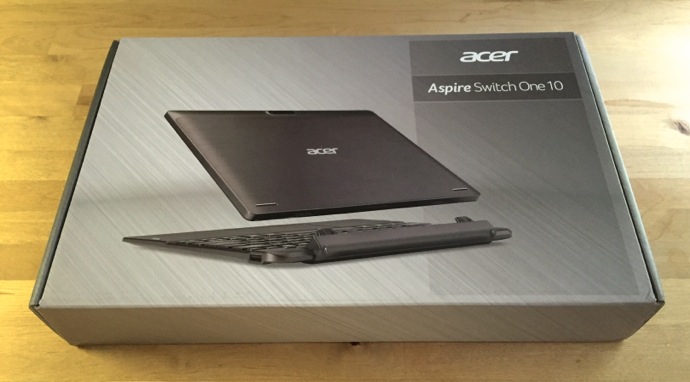 The Acer Aspire Switch One 10 arrived in a small box that bodes well for its portability. And indeed, when the box was cracked the tablet within is a 10.1-inch model. The keyboard? Unlike many 2-in-1 competitors, it’s included.

As a 2-in-1 convertible device, you can use the Acer Switch One 10 as standalone tablet, or as a laptop. The two components connect using a magnetic hinge with a pair of upright posts that nest inside slots on the tablet for support. They are easy to take apart—a solid pull, with no button or latches to release—and they snap back together with the magnets helping to guide the support posts in. The only other thing in the box is a small AC charger.

The basic setup of the Switch One 10 is simple and quick. I began by connecting it to power. It runs Windows 10 (32-bit version), so you start with a prompt to connect to your Wi-Fi network, then once it has access to the internet you are walked through the usual Windows setup process, including accounts and passwords.

At this point, I ran into a bit of a problem. Right off the bat, everything worked perfectly in laptop mode, but when I switched to tablet mode, the Switch One 10 refused to recognize touch input. I kept going back to the settings to make sure it was set to switch to tablet mode with the keyboard detached, checked the input settings and everything seemed okay—but no touch recognition. Not in laptop mode either. Rebooting (the tried and true IT support standby) did nothing. After a frustrating hour or so, it dawned on me to check for Windows updates and sure enough, there were a whack of them waiting to be downloaded and installed.

I ran the updates, restarted and everything worked exactly as it should, including the touch input.

Lesson learned. Always check for Windows updates, because a new device may not be configured to prompt you to do so. 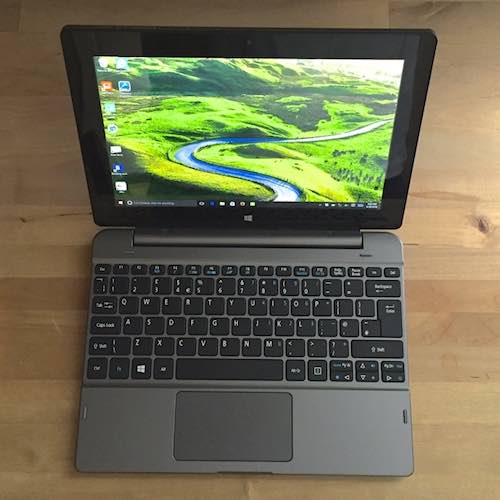 As a laptop, the Switch One 10 is a decent little machine for casual computing.

The 10.1-inch display is small for a laptop and the HD resolution means it’s not as sharp as it could be. However, text is legible and reasonably crisp. The quad-core Atom processor, 2GB of RAM and 32GB SSD on my review unit limit what it can be used for. It would be fine for running Microsoft Word, it’s fine for web browsing (so long as you don’t try to keep 20 tabs open at once) and its perfect for checking in on social media. The built-in microphone supports Cortana and the touch display let me play with marking up web pages on Microsoft’s Edge browser.

With the keyboard base to adjust the display angle and its built in speakers, this would actually be a great little device for curling up on a couch and watching Netflix.

The tablet half has an aluminum shell, but the base is plastic. It weighs almost exactly what the tablet does, so if you recline the display to extremes, you have to be careful to avoid tipping it over. The keys have a decent feel to them with sufficient travel to register keystrokes, but they’re smaller than normal, so typing does take some getting used to. It also has a surprisingly robust selection of ports, including USB, MicroSD and HDMI Micro.

I’d have no problem using the Switch One 10 as an ultraportable (1.26 kg) laptop, but I wouldn’t want to use it for working for an extended period of time.

As a tablet, the Switch One 10 provided a snappy, responsive Windows 10 experience—at least it did once I installed those Windows updates. It’s larger than most full-sized tablets at 10.1-inches, and thicker and heavier as well. But it was still small enough to hold in one hand, at least for short periods of time. It has 10 hour battery life, which is competitive. 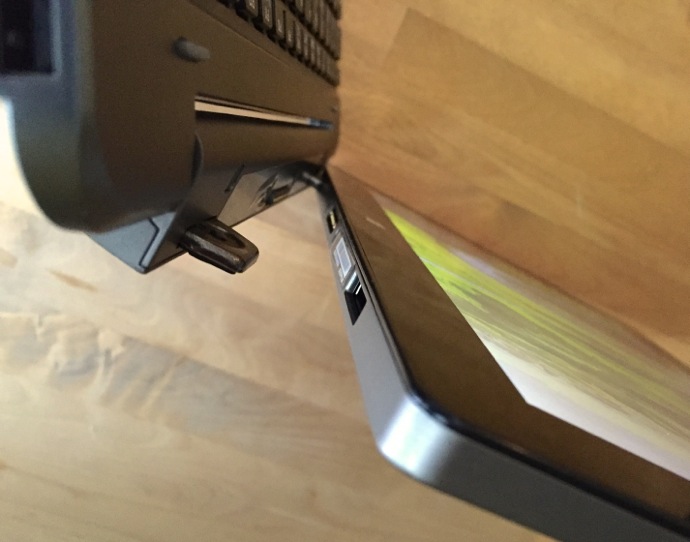 An Affordable Chromebook Alternative for Students

So who is the Acer Switch One 10 for? Unlike the Microsoft Surface 3, most people wouldn’t be able to get away with using this 2-in-1 as their primary “work” computer. However, the Switch One 10 is priced much lower and includes the keyboard instead of charging extra for it. Its price has it more in the range of Chromebooks, but it has the advantage of running Windows 10 along with Windows software, and you can use the display as a standalone tablet.

To me, this makes the Acer Switch One 10 an excellent option for students, or families with students who need a casual use PC. It’s very affordable, it runs Windows software (and should provide acceptable performance for productivity software like Word and Evernote), it has all-day battery life and it’s ultra portable. You could easily slip this 2-in-1 in a backpack. The display may not be high resolution, but it is HD and it’s bright enough and offers good enough viewing angles to use it for streaming video as well.

And despite the low price point and small size the Switch One 10 doesn’t look or feel cheap—the brushed aluminum lid/tablet is actually rather sharp looking.

Look for the Acer Aspire Switch One 10 soon at Best Buy.