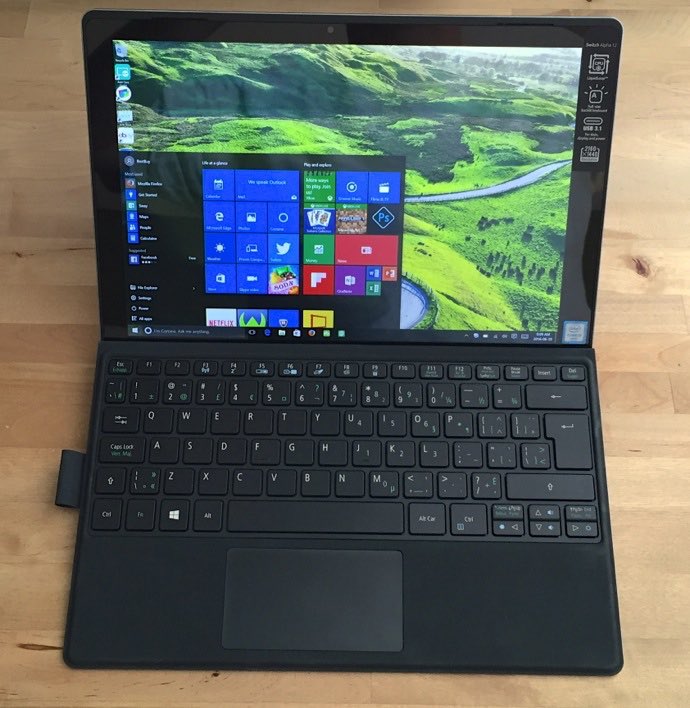 (Almost) Everything You Need in the Box

One of my pet peeves about convertible 2-in-1 laptops is the tendency for manufacturers to heavily promote the keyboard cover, but then charge extra for it. To me, the keyboard cover is the whole point of these devices. With it, you have a true 2-in-1 device, capable of even taking the place of a laptop. Without it, you have a really big tablet. And not including the keyboard is misleading in terms of price, since you have to pony up more cash to get what really makes the device useful and is often central to advertising campaigns.

So kudos to Acer for actually including the keyboard cover with the new Aspire Switch Alpha 12. That’s right, it’s in the box. The price you see isn’t the starting point, it’s the final price.

Except for one thing … The Aspire Switch Alpha 12 supports stylus input (and even has a stylus storage loop built into the cover), but Acer doesn’t include that one.

So if you’re comparing to the Surface Pro, Microsoft includes the Surface Stylus but you have to pay for the cover; Acer does the opposite. I suspect most people would rather have the keyboard than the stylus, so that was probably the right call if you had to leave one out to keep the price down. 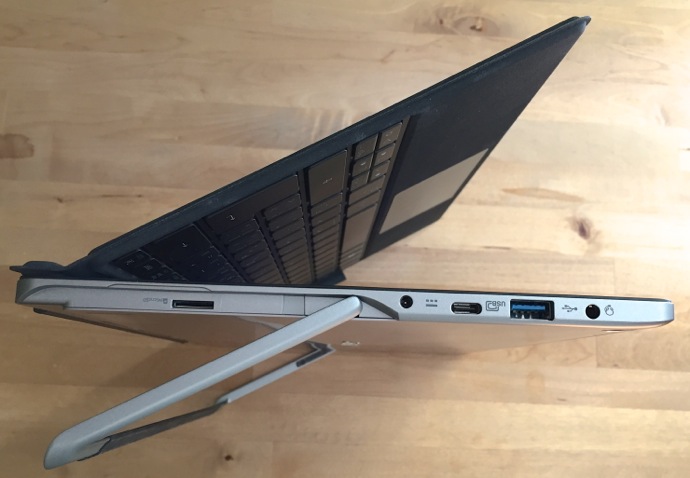 The Acer Aspire Switch Alpha 12 is suitably configured to serve as a productivity laptop. My review unit—a Best Buy exclusive, by the way—was equipped with a 6th generation Intel Core i3 CPU, with 4GB of RAM and a 128 GB SSD. That’s plenty of horsepower for pushing the pixels on its large, crisp, 12-inch quad HD display. Microsoft Office and the like will be no trouble.

With any laptop, I prefer to have a little more headroom with RAM and if you’d like to double it to 8GB, as well as gaining more computing muscle and additional storage space, there’s a second Best Buy exclusive configuration offering a Core i5 CPU, 8G of RAM and a 256GB SSD.

Overall, performance is snappy, the Wi-Fi is speedy (especially if you happen to have an 802.11ac router) and thanks to Acer’s fanless, pumpless LiquidLoop cooling, it’s also completely silent.

I’m not sure how much you would use a 12-inch tablet. As a drawing device (assuming you invest in a stylus) it would be useful, but it’s a little on the large side for the typical, casual tablet tasks. That being said, if you don’t mind a slightly awkward to hold tablet, it does the job well and with Windows 10, automatically switches back and forth between laptop and tablet mode.

In terms of expandability, there is the expected headphone jack, plus a microSD card slot, full-sized USB 3.0 port and one of the new USB-C ports. You can read Gadjo’s explainer for the details but that USB-C will become increasingly important as a multi-purpose port that handles peripherals like storage and displays.

I find any of the convertible keyboard covers to be a little on the bouncy side—that’s hard to avoid when they consist of an elevated slab of plastic secured at the high end—and Acer’s has some bounce to it to. I primarily use a mechanical keyboard, so it could be that I pound on the keyboard more than most, so you may not even notice.

That being said, I like it. It sits securely, the keys have 1.4 mm of travel and they’re full-sized. The keyboard is also backlit, which is a must-have in my books and makes using the Switch Alpha 12 in dim lighting a pleasure.

How Does the Switch Alpha 12 Stack up to the Surface Pro 4?

At some point we have to stop dancing around the elephant in the room and ask the question: how does the Switch Alpha 12 stack up to the Surface Pro 4?

The Switch Alpha 12 enjoys a considerable advantage on price, especially when you factor in the cost of the optional keyboard cover for the Surface Pro. You may have to buy a stylus for the Switch Alpha 12 but that’s an inexpensive add-on.

In terms of ports, both have a full-sized USB 3.0 port and microSD card reader, but where the Surface Pro has a Mini DisplayPort connector, the Switch Alpha 12 instead offers USB-C. You’ll likely need an adapter to use this to connect to an external display, but that USB-C port offers a lot more versatility and is only going to get more useful as more accessory makers ramp up compatibility.

If I needed an extremely powerful 2-in-1 with the highest resolution possible, I’d pick the Core i7 Surface Pro 4. But for general productivity, casual use or a student, the Acer Aspire Switch Alpha 12 offers a pretty compelling package and an even more attractive price.