Digital photo frames held a lot of promise. No more having to wait for prints to be developed, you could have a digital photo displayed instead. Cool idea, but PhotoSpring makes it even better. First, there’s no worry about getting bored with the same old photos, because PhotoSpring is a connected frame. Photos are constantly uploaded from your smartphone, tablet or PC, as well as from any friends or family you’ve invited. PhotoSpring is also bigger than most prints, with a 10-inch display so you can actually see the images from across a room. And when you want to explore, take it off its charge stand and use this digital photo frame like a touchscreen tablet to flip through your complete collection of digital photos.

It’s a great concept. I’ve been testing a PhotoSpring for the past month and here’s how reality stacks up against the promise. There’s not much to unpack with the PhotoSpring. inside the box is the digital photo frame, a charge stand and a power adapter. Power it up and you’re prompted to plug it in, then walked through the configuration. This involves connecting to your Wi-Fi network (2.4GHz only) naming the frame, then using a PhotoSpring app (available for iOS, Android, Windows and Mac) to connect to the frame using an unlock code.

That’s about it for the basics of getting up and running. From there, you have plenty of options for fine-tuning your viewing experience. The settings on PhotoSpring include brightness, slide show delay, a schedule (you may want the frame to shut down at night, for example), the option to auto-format photos and volume—did I mention it also plays shared video clips?

The PhotoSpring display looks very good, especially from a few feet away. At that distance images appear crisp. Colour reproduction seems accurate, viewing angles are good and brightness is excellent.

Navigating the user interface is mostly straightforward (although it took me a while to figure out how to actually start a slideshow) and PhotoSpring helps you to wade through large photo collections by automatically sorting them into logical photo albums. By year, for example. Or you can simply look at all photos. When being used in tablet mode to browse through photo albums, PhotoSpring is a little thicker and heavier than today’s tablets, but it’s a really useful feature and you get four hours of use on a charge. That’s plenty of time to pass it around with friends to check out all the pictures they’ve missed, and the 10-inch display is a lot more pleasant than squinting at a smartphone screen.

You have the option of leaving formatting to PhotoSpring, which will then automatically crop photos in order have them fill the screen while attempting to preserve the primary content. In my experience this worked well, with only a few photos where the top of someone’s head was cropped out.

The app itself is straightforward. It’s two primary functions are to manage your frame(s), including sending out invitations to people to share their photos. You can also remove a connection. This is where you have the option to automatically send photos to a frame as they are taken. Frame management also shows you how much storage space is available on a PhotoSpring. The second function is to manually send photos. To do so, you can select any photo from your camera roll or albums. You then choose a frame to send it to, enter a title (optional) and then hit the button to send it. A few minutes later, it shows up on the destination PhotoSpring. Pretty cool!

You can also send videos, and the same management features are available on the Mac and Windows versions of the PhotoSpring app.

Note: The feature isn’t available yet, but according to the PhotoSpring app, you’ll soon have the option of uploading photos from Facebook, Instagram and other social media feeds.

My experience with PhotoSpring has been almost all positive. That being said, the display is HD resolution, so looking at photos from very close up is not as sharp as it could be. I have another digital photo frame with higher resolution, but then again it’s three times the price. HD seems a reasonable tradeoff for affordability and from a few feet away it looks pretty crisp. I also found the glossy white plastic frame to be a little on the reflective side when there are lights on in a room.

But really, there isn’t much to complain about here.

Who Should Consider PhotoSpring?

PhotoSpring makes a great addition to any home or office. The constantly refreshed photos keep the contents from getting stale. Even when manually uploading new photos, it’s much easier to get the content onto PhotoSpring than it is the old-school way, having to side load images onto a memory card. The ability to use it as a digital photo album, holding PhotoSpring like a tablet and using the touchscreen display to browse a photo collection for four hours at a time is a real bonus.

Where I really see PhotoSpring having value is with family and friends who are separated by distance. Social media services like Facebook help people stay in touch in these cases. But investing in a pair of PhotoSpring frames, with the two parties sharing photos with each other, is a way to instantly share experiences and events without having to fire up a device. Having the photos appear in a home setting seems more intimate than having to scroll through a social media feed as well.

If you’re looking for something to display your digital life, make sure to shop the full collection of digital photo frames (including PhotoSpring) at Best Buy. 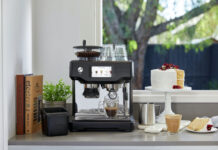