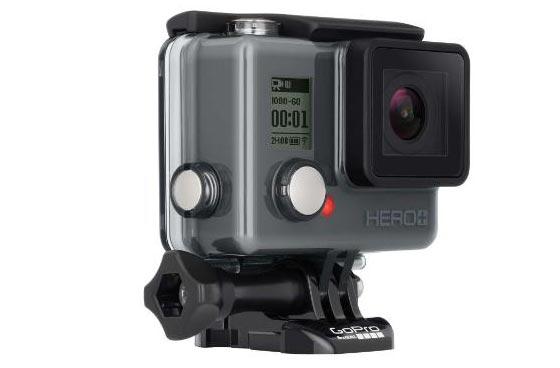 GoPro, the leader in wearable action cameras, has just announced its latest model, the Hero+ , in time for the upcoming winter sports season. The Hero+ is considered an entry-level GoPro camera, and the major new feature is the addition of Wi-Fi (and Bluetooth) technology, as you might have guessed.

In terms of price point the Hero+ sits between the entry level Hero model and the souped-up Hero4 models.

When the GoPro cameras first came out you basically just hit the record button, did your thing, pressed stop, and waited till you got home to see what footage you had. Recently GoPro has upped the ante by adding an LCD touchscreen to some models, like the Hero 4 Silver, and wifi and Bluetooth technology to the Hero4 and Hero+ models. This means that you can connect your camera to your smart device and get a live feed, review your footage, and control camera functions and settings, right there on your phone or tablet. This opens up a whole new realm of possibilities for GoPro enthusiasts.

With a live feed you have much better control over your framing and composition. You can also mount the camera on a tripod, for example, and then activate it as required from a remote location, which means you get a lot less excess footage on your memory card. Aside from sports enthusiasts, I imagine storm chasers and wildlife videographers could make excellent use of this technology. Even wedding shooters might be tempted to offer their clients another angle.

One of the great things about the GoPro app is that it allows you quickly edit your footage before you share it to your favourite social media. In the right hands, this is the ideal camera to get footage out to the world in the shortest time frame possible, and in today’s world he who posts first, wins.

So what else do you get with the Hero+? Well, you can shoot video in stunning quality at 1080p at 60 frames per second, along with 8 megapixel photos at a 5 frame per second burst rate. You can also set the camera up to shoot lapse photos, which is pretty cool.

One of the features that I personally admire is the 2 hour shooting time that the GoPro battery can deliver. If you’ve never held a GoPro camera before, you really should stop by your local Best Buy outlet and check them out – they are absolutely tiny, way smaller than you would expect. So to be able to deliver 2 hours of continuous shooting is pretty remarkable. The Hero+ also weighs just 4.3 ounces, so when you wear it you hardly even notice it’s there.

As ever you can rely on GoPro’s rugged design to allow you to bring the camera to places where most electronics fear to go, including 40m (131’) underwater.

Fingers crossed we get more opportunities to hit the ski hills with our GoPros this season than we did last year out here on the Wet Coast!