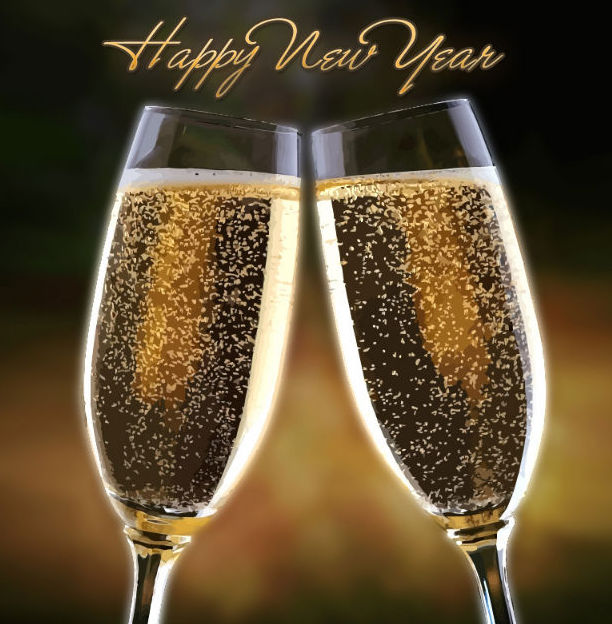 Although there are events going on all across Canada, not everyone goes out for New Year’s Eve. With the extra expense involved with New Year’s Eve and the temperatures dropping outside, it’s not always that appealing to bundle up and head out for the night. Plus, if some special someone picked up a 4K TV for Christmas or during Boxing Day week, you’re not going to want to pull yourself away from your cozy living room.

But New Year’s Eve doesn’t have to be a bust just because you’re staying home. There are a lot of movies you can stream, some great New Year’s Eve shows on cable, and you can even hook up your gaming system and invite a few friends over to go head to head on your favourite game for a few hours.

Plus, when it comes to treats and eats, you’ll be completely covered when you bake up a few of these amazing appies for New Year’s Eve. In honor of New Year’s Eve, Shelly’s Friday Favourites has moved to temporarily to Tuesday, and with sweet, savoury, and bacon appies, I’ve got a few sure-fire hits for you to ring in the New Year with. 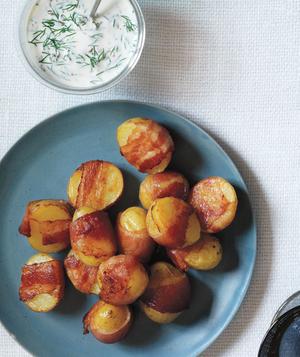 What would an appie party be without a bacon appie? I think the best part of these bacon-wrapped potatoes is the creamy dill sauce. Recipe and photo from RealSimple.com.

Steam the potatoes in a steamer basket in a large saucepan until tender, 15 to 18 minutes. Let cool.

Heat oven to 425° F. Line a rimmed baking sheet with foil. Wrap each potato with a piece of bacon and place, seam-side down, on the baking sheet. Bake until the bacon is crisp, 18 to 20 minutes.

Meanwhile, in a medium bowl, whisk together the mayonnaise, buttermilk, dill, caraway seeds, and ¼ teaspoon each salt and pepper. Serve with the potatoes. 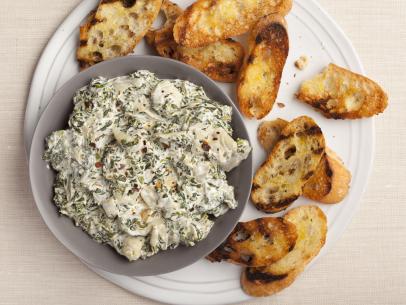 At my house New Year’s eve just isn’t an fun evening-in without spinach and artichoke dip. The problem? I’ve never found a recipe that was as good as my favourite restaurant until I found this one. Try this dip with pita chips or chunks of hot sour dough bread. Photo and recipe from the Food Network.

Boil spinach and artichokes in 1 cup of water until tender and drain. Discard liquid. Heat cream cheese in microwave for 1 minute or until hot and soft. Stir in rest of ingredients and serve hot. 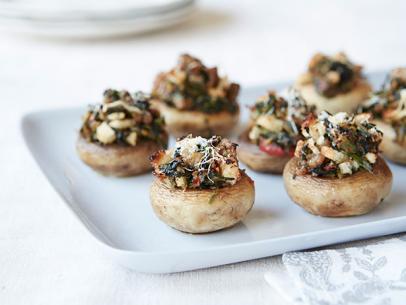 If you don’t like traditional italian sausage, you can sub out turkey or chicken sausage in this recipe. Either way, it will be an amazing addition to your New Year’s Eve. Photo and recipe from Rachel Ray.

Preheat oven to 500 degrees F.
Heat a large skillet over medium high heat. Add oil and mushroom caps and season caps with salt and pepper. Saute caps 5 to 7 minutes, until they are lightly browned and tender on edges.

Turn caps up and let juices drain away from caps. Transfer caps to a small nonstick baking sheet. Wipe out skillet and return to heat. Add a touch of oil and sausage to the hot skillet. Brown and crumble sausage for 3 minutes. In a food processor pulse and chop the garlic, add mushroom stems and pulse to chop the mushroom stems.

Add celery, onion and red bell pepper to the mushrooms and pulse to chop. Remove mixture from the processor and saute veggies and mushrooms over medium high heat another 3 to 5 minutes. Add dry, defrosted spinach and stir into stuffing.

Add chopped bread and cheese to the pan and toss stuffing until bread is moist and stuffing is combined, 2 or 3 minutes. Fill caps with stuffing using a small scoop or large spoon. Place caps in hot oven and reduce heat to 450 degrees F. Bake 6 to 8 minutes to crisp edges of stuffing and set stuffing in mushrooms. Transfer stuffed mushrooms to a serving plate. 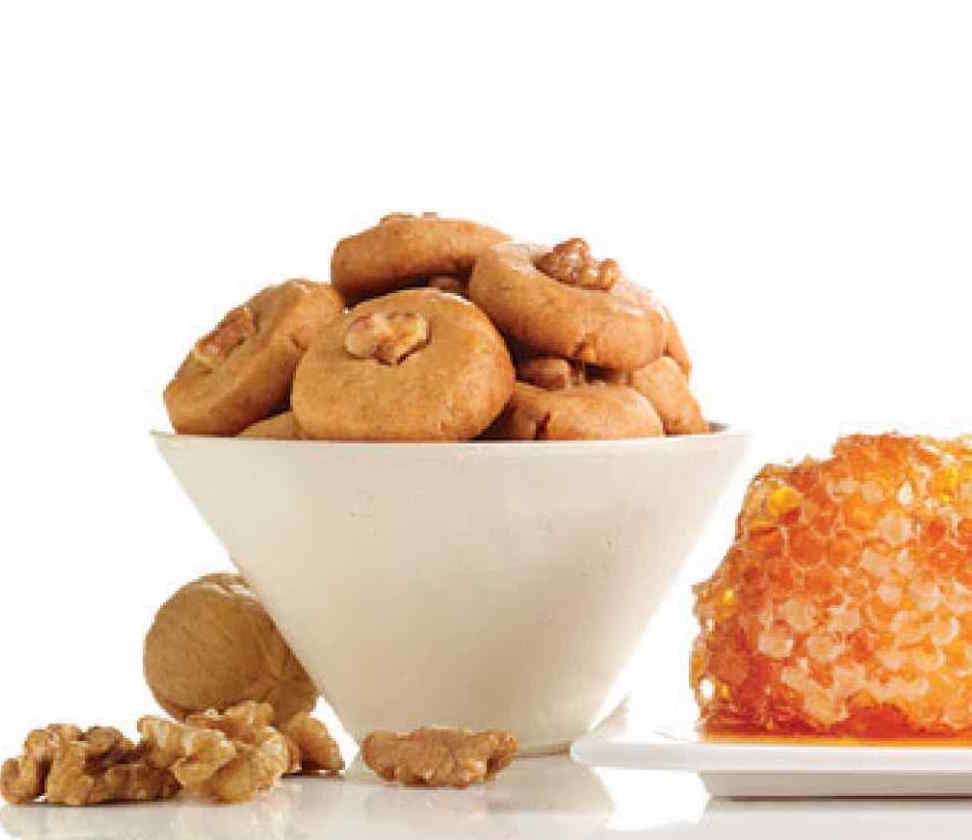 Having coins around on New Year’s Eve is a sign of good luck, and these Honey Walnut Coins have the added benefit of being delicious too. Photo and recipe from Martha Stewart.

Pulse flour, salt, and 3/4 cup walnuts in a food processor until finely chopped.

Beat butter with a standing mixer on medium-high speed until fluffy, 3 to 5 minutes. Add sugar, and beat until pale and fluffy, 2 minutes more. Beat in 1/3 cup honey. Reduce speed to low. Add flour mixture, and beat until just combined (dough will begin to pull together). Shape into a disk, and wrap in plastic. Refrigerate at least 1 1/2 hours (or up to 2 days).

Preheat oven to 325 degrees. Let dough stand at room temperature for 10 minutes. Pinch off about 2 teaspoons dough, and roll into a 1-inch ball. Repeat, spacing balls about 1 inch apart on baking sheets lined with parchment. Flatten cookies to 1/2 inch thick with the floured bottom of a glass. Press one of the remaining walnut pieces into each cookie.

Bake, rotating sheets halfway through, until edges are pale golden, about 20 minutes. Transfer sheets to wire racks, and brush cookies with warm honey. Let cool. Cookies can be stored in an airtight container for up to 2 weeks.

Now that you’ve got New Year’s Eve covered, you can kick back, relax, and put your best intentions forward for a great New Year. If you have an appy recipe you like to use every New Year or holiday, share it in the comments. If you need a few great accessories for your kitchen to make these appies or kick off your New Year, check out my favourites: