Best Buy Blog
Home Home, Furniture & Kitchen Bedroom Furniture Duvets 101: What you need to know to get a better sleep

When people think about upgrading their sleeping situation, they tend to focus their energy and money on a new mattress. However, a comfortable and restful sleep depends not only on your mattress but on your duvet.

History of the Duvet

No one really knows who invented the duvet but there is evidence that citizens in China were using duvets as early as 3000 BC. The term duvet comes from the Norse word “dunn” meaning “down”. When the French began using them, the term morphed into “duvet”. They were originally stuffed with natural feathers or down, however today, duvets are stuffed with a variety of natural and synthetic fillings.

When choosing a duvet it’s important to know about the different fillings, duvet construction, ticking, tog and how to properly maintain your duvet so it will last for years to come.There are four main materials that are used to fill duvets: down (or feather), wool, silk and microfiber.

Down is the inner soft plumage of waterfowl, such as ducks or geese. This material was the original filling for duvets and continues to be popular today. This light feathering is located under the outer feathers and it is what keeps waterfowl warm throughout the year. The fluffy nature of these feathers allows water easily evaporate of the waterfowl, resulting in a faster drying time. As a duvet filling, down does exactly the same thing for you while you sleep! Depending on the warmth rating, down duvets are one of the warmest duvets on the market, however the air space created by the fluffy feathers allows for heat to escape throughout the night, resulting in comfortable, temperature controlled sleeps.

I personally own a down duvet and love it! It is high-quality

and has kept its height and shape for years. The height is one of the aspects I love about it, as down is the one of the only duvets that is truly able to give your bed that luxurious, fluffy look. In addition to down, duvets can also be filled with the outer feathers of waterfoul. Feather duvets tend to be firmer than down duvets because feathers lay flatter and also heavier. They are also normally a slightly lower price point when compared to down duvets. There are also duvets available that are a combination of down and feathers.

Something like the Moholi Royal Elite Collection 233 Thread Count Duck Down 4 Seasons Duvet is a great all season down duvet option because it is lightweight but warm. The down material contained in the duvet has also been extensively washed, rinsed and treated with antimicrobial products in an attempt to make it as hypoallergenic as possible. However, if you are someone with severe allergies, a down or feather duvet may not be the best option for you.

Though all duvet filling materials have some sort of temperature regulating abilities, wool is the most effective due to its natural properties. Wool has the ability to fill 30% of its weight with moisture and then let it evaporate. This makes it great for couples who have varying sleep temperatures, as the wool can easily adjust to both people in the bed. It doesn’t have the same warmth as down but depending on your sleeping temperature that may not be a problem. The Maholi Maxwell Royal Elite Wool Duvet is made from 100% pure virgin Australian hypoallergenic wool and offers year round temperature regulation. It is available in twin, double, queen, king and super king.

Silk duvets are made by layering long fibre silk floss in a grid pattern. Because these duvets are layered rather than stuffed, heat can easily escape through the grids. This thin silk floss also means it’s the least bulky of all the duvet types, which is great for people that don’t like a weight on them when they sleep. If allergies or asthma is an issue, silk is a protein and therefore doesn’t attract dust mites, making it naturally hypoallergenic! Silk duvets are also far easier to clean than other natural duvets. The LuxeportZEN 200 Thread Count Allergy Free Light Silk Duvet is made out of natural silk and whisks away moisture throughout the night to keep your temperature regulated while you sleep.

Synthetic bedding tends to have a bad reputation of being low-quality, cheap and clumpy. In reality, synthetic bedding has come a long way. Microfiber is a type of synthetic that is made of petroleum-based polymers such as polyester and nylon and because it’s synthetic it can be tweaked to whatever it needs to be. Therefore, good quality microfiber duvets tend to be lightweight but warm with temperature regulation properties. For example, the lightweight Maholi Ambassador Collection 233 Thread Count Microfibre Gel Duvet is made from a polyester microfiber and has the Coolest Comfort treatment to ensure that moisture is wicked away from your body as your sleep. It may not be as long lasting as a filling such as down but the lower price point makes it great for situations with a limited budget.

In addition to the filling, duvets are also classified by their construction, ticking and tog. In the past duvets were constructed by either stuffing the down between two pieces of sewn together fabric or by sewing additional rows horizontally throughout the duvet. Unfortunately, with this design, gravity would force the filling to fall to the edges of the duvet, resulting in an uneven duvet with no actual stuffing keeping anyone warm! To avoid this problem, duvets are now sewn with cubes or squares throughout so that the filling stays where it should be. A duvet can either be constructed either with a sewn through box construction, where the filling is separated and sewn into squares, or a baffle box construction, where 3D cubes are actually formed by adding another layer of fabric perpendicular to the duvet covering. Baffle box construction results in a fluffier duvet with more height and tends to be a higher price point.

Ticking is the fabric covering on the duvet and it is classified by thread count. The thread count is most important for down and feather duvets as you don’t want the feathers to escape. The higher the thread count, the tighter and more durable the ticking.

Tog is the warmth rating of the duvet. It is most often represented by a numerical value, where the higher the value represents a warmer duvet. However some companies just characterize their duvets as those for “warm weather”, “cold weather” or “all season”. It’s important to think about what suits you best when choosing a tog. I personally have an all season duvet and I find that it is able to maintain my sleeping body temperature in both the summer and winter, however many people have two duvets, a light one for summer and a warmer duvet for the winter months.

Taking good care of your duvet will ensure it lasts for as long as possible. Duvet maintenance depends on the duvet filling. Most duvets with natural filling, such as down and wool, need to be dry cleaned. They also need to be fluffed regularly to maintain their height and to ensure that the material remains evenly distributed. Microfiber and silk duvets can often be hand washed at home and can either be air dried or can be put in your dryer on tumble dry (note: silk duvets must be hang dried). Helpful hint: If you are putting your microfiber duvet in the dryer, put tennis balls in the dryer as well to ensure the duvet keeps its height.

When choosing the right duvet for you, it’s important to think about the filling, its construction and how warm it is. Down or feather duvets are a classic, they are warm but the air space still allows heat to escape. However, if you have severe allergies or asthma but still want a natural filling, you may want to invest in a wool duvet. Wool has the natural ability to absorb moisture from the body and therefore is great for couples with varying sleep temperatures. Silk duvets are lightweight and thin, making them great for people who don’t like a heavy cover on them when they sleep. Microfiber duvets are filled with synthetic materials such as polyester or nylon and depending on the quality, can mimic the weight, height and comfort of a duvet with natural filling but without the risk of your allergies acting up. Regardless of the filling, it is important to also choose a duvet with a high quality ticking and a tog, or warmth factor, which matches your sleeping temperature. After that, all you have to do is choose a duvet cover, curl up and begin a lifetime of comfortable, cozy sleeps!

Have you recently invested in a new duvet? What filling did you choose and why? 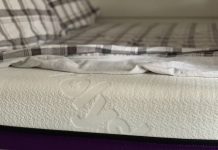 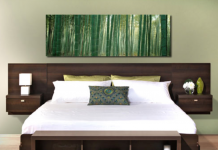 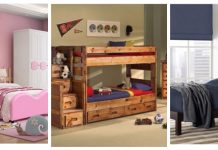