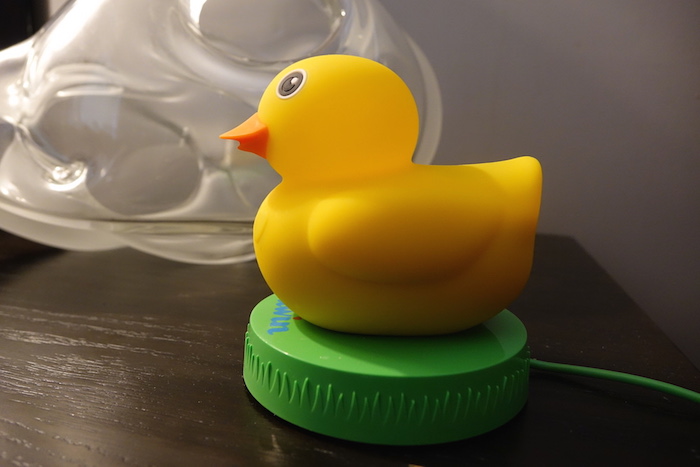 Every child has that one inanimate object to which they’re super-attached, whether it’s a stuffed animal, doll, action figure, pacifier, or even just a cuddly blanket. Edwin the Duck, an app-connected smart toy, strives to be a far more responsive version of that fun “best friend.”

The ultra-cute duck toy is designed to accompany children through their daily activities, from playtime, to bathtime, and even bedtime. It’s suitable for kids from newborn age up to about five years.

Download Edwin’s mobile app to an iOS or Android device, then pair the duck to your smartphone using the standard Bluetooth pairing process. Once paired, you can access four sets of activities: interactive stories, a selection of songs, learning games, and bedtime lullabies. 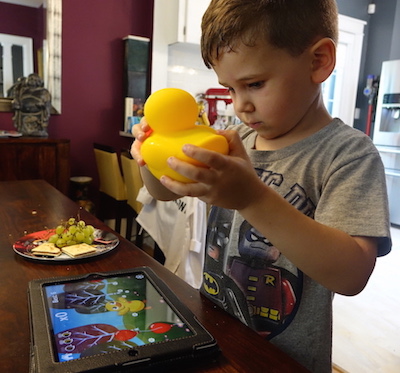 Additionally, Edwin functions as a Bluetooth speaker, able to play your own music or sounds, whether it’s to entertain your little one during bathtime, play his favourite soothing song at naptime, or initiate a fun dance party.

When used for bedtime, Edwin also serves as a soft glow nightlight with which your child can cuddle up.

Fully waterproof, Edwin floats in the bathtub, or you can even dunk him underwater.

Adding to his charm is a beating red heart that, fittingly, serves as the power button, and shines bright as your child plays with him, and to advise of the connection and battery status.

To charge Edwin, sit him inside the included “nest” (i.e. charging base). Once fully charged, he can run for up to eight hours, which easily equates to about a full day’s worth of use, or more. Kids see when he needs to go back on his nest for a “nap” thanks to a flashing yellow heart. 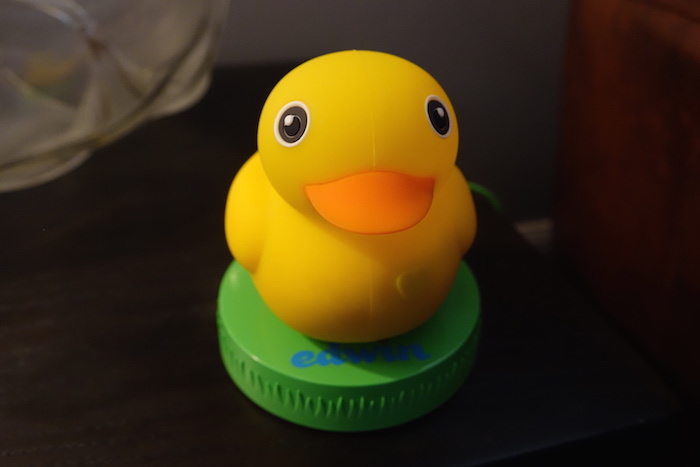 Simply charge Edwin up (overnight is best before first use), download the app, and, as noted above, pair it with your phone and the app, and setup is done. It’s easily a 10-minutes-or-less process once Edwin is charged and ready to go. Edwin can pair with multiple devices, though he can only connect to one at a time.

My 4.5-year-old son and I tried Edwin out paired with an iPad to get a nice, large-screen experience.

There are three games. In Shapes with Edwin, your child is shown four shapes, and is asked to identify the correct one the narrator dictates by tapping the corresponding part of Edwin’s body: the left or right wing, front, or back. With Shape Matching, a cut-out version of a shape is shown, after which the child has to match it with one of five coloured shapes displayed below it using the same tap to identify method. The demo was slightly confusing; it took us a few tries to figure out that the direction was advising to tap the part of the body, not slide a hand across it. But once we figured that out, the games were smooth sailing.

Last is Balloon Pop, whereby your child goes on an adventure with Edwin to pop flying balloons. The child simply holds Edwin and uses it as a motion control device to make the virtual Edwin fly and catch the balloons. This is thanks to the built-in accelerometer, which also makes the aforementioned games possible.

I would often look over to see my son furiously shaking Edwin, or tapping his butt and giggling aloud as he heard a “quack” and applause for getting the right answer. 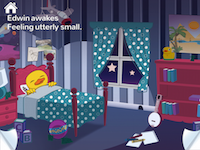 Two books come loaded with the app: Your New Best Friend, and Feeling Small. Tap Edwin’s wings to turn the pages. There are other recognized motions as well, like tilting Edwin up to get him out of bed, shaking him from side to side to help him brush his teeth, or moving him up and down to make him fly. Essentially, Edwin becomes the remote control.

Some motions were a bit difficult; my son, for example, had a hard time tossing Edwin up in the air in one hand to trigger the throwing motion. He would pass Edwin over to me every time that motion was required. Also, if the wake-up tilt isn’t done just right, it won’t work, which can get a bit frustrating, particularly for an overly-excited child who might not quite understand why Edwin isn’t waking up when he’s “doing it right.”

As the narrator reads, the corresponding words appear on the screen, with each one highlighted as she says it to help kids work on word recognition. 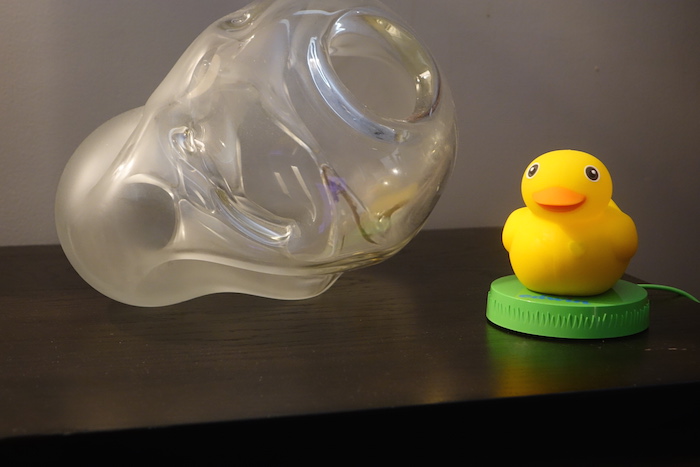 The stories also help with memory. In Feeling Small, you need to help Edwin make breakfast by opening the correct cupboard doors to get the items needed—bowl, spoon, and cereal—in the right order. On another page, the child needs to match Edwin’s shirts to the corresponding coloured laundry basket.

The stories themselves also teach valuable lessons, like keeping one’s room tidy, not giving up, and trying one’s best. As your child shakes Edwin back and forth vigorously to help him win a swimming race, you’ll hear the sounds of the water splashing through Edwin’s built-in speaker, adding another level of realism to the experience for your young one.

Get things right, and Edwin will let out a pleasant and reassuring “quack!” which is enough to get any child giggling. An audience of kids will also roar with cheers.

At any time, mom and dad can enter the settings menu (a math question must be answered first to permit entry) to see a skills assessment via star icons. The data is based on the average for each game played.

The songs section is ideal for use during bathtime. One of the two available tunes is an original ditty called Squishy, Squishy, Squashy. Not only can your child listen to the tune playing from a nearby tablet or smartphone, but Edwin also hilariously hums along as it plays. A second song, called He’s My Edwin, is a cute “best friend” song to play as well.

There’s also a separate app called Edwin’s bath time, which includes a temperature sensor mode. If the water is too hot, Edwin will sound an alert, and if it’s too cold, he’ll shiver. 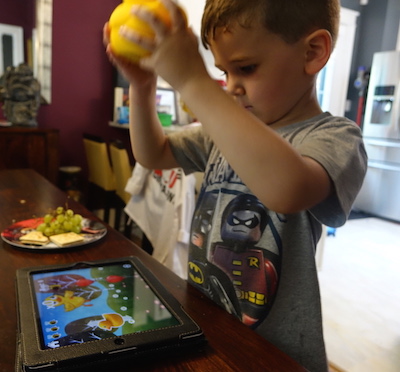 The sound quality is not bad for a mini duck toy. As expected, it won’t rival a true portable Bluetooth speaker. But for tunes in the bath, and to play back lullabies in bed with your little one, it is surprisingly good. And because of the fully-enclosed design, parents don’t have to worry about mold, as is the case with typical rubber squirt bath toys that have small air holes.

The app comes with an instrumental version of Twinkle, Twinkle Little Star that can help lull your child to sleep at night, along with the soft glow nightlight.

Download the free Sleepy Time app to access additional sounds, like a heartbeat, rain, fan, creek, shhh, twinkle, and lullaby. Set a timer and volume from your phone, from just 15 minutes, up to a full hour if your child tends to take awhile to fall asleep; or let it go continuously until you manually turn it off. Also use the app to turn the nightlight off. The sound will continue running, even if you close the app, until the specified time.

Ideally, these functions would be built directly into the main Edwin app instead of users having to download and switch to another app. That said, considering they’re all free, it’s not that big a deal.

Edwin is a cute toy for kids, and parents will appreciate the educational component. That said, kids are a fickle bunch. So Edwin will only become that true “best friend” if your child decides that he’s enamoured with him.

Even if Edwin doesn’t become a toy that your toddler takes with him everywhere, he’s still a great toy for occasional play, as a bathtub toy, or even just a night time friend.

The only drawback with Edwin is the lack of content—two stories and three games aren’t enough. But that’s an issue easily rectified with app updates, and more complementary apps. Pi lab, which created Edwin, says its library of content is always expanding, so we can expect to see Edwin take kids on many more adventures soon. Already, one new app has launched called Edwin’s temp time, which uses the temperature sensor (the same one that detects the temperature of the bath water) to check your child’s temperature as you move Edwin slowly along the child’s forehead.

All in all, Edwin is a great toy that only has the potential to become even better as new content and apps are released for him.