Think smartwatch and images of the iconic Pebble probably come to mind. However, there’s another smartwatch that’s been making waves (like the Pebble, it garnered awards at CES 2013) and this one doesn’t just do notifications —it’s also fully equipped to integrate with your favorite smartphone virtual assistant. That’s right, this stylish wearable with the retro analog look is a smartwatch in disguise that supports notifications. Some of the Martian watches even let you issue voice commands to Siri or Google Now, and place and answer voice calls.

The Martian Watch is an excellent choice for those who want to keep their smartphone discretely out of sight. 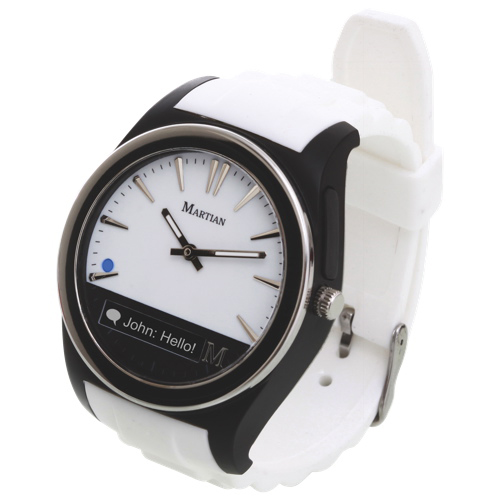 Stealthy Look With Style to Spare

One knock on many smartwatches is that they look like a smartwatch. That’s to say, you glance at them and immediately think of a chunky computer or futuristic device. Not everyone likes that look and it can also give you away.

Martian smartwatches have a decidedly retro vibe. Consider the Martian Notifier shown at the left. It has a traditional analog quartz watch movement —complete with sweeping hands— in a surprisingly thin round stainless steel case.  The silicone bands are a standard 22mm, so they can be swapped out with widely available commercial alternatives.

The Martian Notifier smartwatch can be programmed using an iOS or Android app to support notifications from a wide range of apps. The watch face includes a 96 x 16 pixel OLED display for showing alert information and there’s a vibrating motor for silent notifications.

You can also configure a Martian smartwatch to be the remote controller for your smartphone’s camera, to alert you if you leave your smartphone behind and even to find your misplaced phone by commanding the device to give off an audible alert as you search for it.

Martian offers 3 additional smart watch models. These have the same functionality as the Martian Notifier, with the added benefit of enabling voice commands, right to the watch.

These three modes are the stylish Martian Passport and  Martian Victory and the fun and sporty Martian G2G.

Martian smartwatches are designed to be an extension of your smartphone. That includes voice capability. With a noise cancelling microphone and directional speaker, the wearer can take or place a call without having to whip out their phone and hold it to their ear. Incoming calls receive a notification, including the caller’s name on the OLED display. There’s also the option of using gestures to accept or reject incoming calls instead of tapping a button on the watch (waving your arm to reject a call may blow that whole “under the radar” vibe, though).

The voice functionality isn’t limited to voice calling. One of the Martian’s more exciting capabilities is its ability to integrate with the Siri and Google Now. This makes placing a call, asking what the weather forecast is, making an appointment in your calendar or even dictating an e-mail a breeze. You don’t even need to get your smartphone out —unless the response involves displaying a map.

With a Bluetooth Low Energy wireless connection (classic Bluetooth is also supported for compatibility with older mobile devices), the compact OLED display and the fact that the analog watch movement is powered by its own replaceable battery (rated for two years), the Martian smartwatch is good for three to six days between charges. An LED indicator light shows if you’re getting low on power.

Recharging the lithium polymer battery is a matter of plugging in the included micro USB cable —the port is also used for firmware updates— and takes just two hours.