What kid doesn’t love ripping open a package that contains a sparkling, new toy? And what adult doesn’t love watching the joy on chidrens’ faces as they open cool gifts?

The holidays are prime time for gift giving, and kids are usually at the top of the list. From toys for young children, to tech items for older kids, there are plenty of cool gifts from which to choose. But as a responsible parent or gift-giver, you want to make sure that even if it’s a toy you decide to get, that it’s educational in some way. And, even better, that it promotes the STEM fields of Science, Technology, Engineering, and Math.

Here are some great ideas for cool gifts that will appeal to kids of all ages – from toys for preschool and young school-age kids, to tech toys for older kids.

Get toddlers as young as 3 familiar with the basics of coding with this cute tech toy, that can also be suitable for kids up to age 8. The caterpillar comes in various segments that click together via USB. Each one has a directional arrow, or lights. Help your child set up an obstacle course with a start and finish line (Start and Finish discs are included), then figure out how to order the segments to get the caterpillar to the finish line. Younger kids will have fun simply pulling the toy apart and putting it together in different orders to see how it scoots across the floor. As your child gets older, he can experiment, and even add the Basic Expansion Pack to increase the level of difficulty, with directions on the segments like 90-degree right turns. Check out my review.

It’s a 21st century rubber duck toy that works with a series of apps to enhance everything from story to bath time. Call up an app, then shake Edwin back and forth to help him win a race, or hold him in the air to simulate putting away laundry before bed in a virtual storybook. Edwin can also help with night time lullabies, and your child can play various learning games. As a bath toy, Edwin is safe to get wet, and even has a temperature sensor to let mom or dad know if the water is too hot. When Edwin gets sleepy, just place him in his charging nest, er, dock, for a battery boost. Check out my review.

It’s a standard foam play mat for babies and kids from 0 up to 5, but with a cool, tech twist. In the middle of the mat’s nine 15” x 15” soft foam tiles is a built-in console that displays 10 unique LED light shows to keep your baby transfixed, or older child mesmerized. Tap the console to change the show, and enjoy. Look inside, and it almost appears as though there’s a tunnel that goes through the floor where the console is positioned. Make sure to grab six AA batteries to make this work out of the box. Check out my review.

What kid wouldn’t want a Hatchimal? The Glittering Garden toy adds some fun sparkle to the egg from which the interactive toy hatches, as well as the fur and wings. As with other Hatchimals, you interact with the egg by responding to the eyes, which light up in different colours depending on what the Hatchimal needs – it might be a pat on the bottom, a rub because it’s cold, or simply just some love. Once the toy pecks its way out of the egg, it will reveal itself as a Penguala or Draggle. Then, your child can continue to have fun interacting with it, helping it to grow from a baby to a toddler and then full-blown child. Some of the best features include games it can play with your child, like tag, and the ability to repeat what your child says back to them, in its own Hatchimal voice, of course. Check out my review.

Like the Hatchimal, the Fisher Price Think and Learn Teach n’ Tag MOVI is an interactive toy that communicates with kids, and moves about. It can play a number of fun learning games with your child. It comes with various games that help teach kids everything from the alphabet, to different animal sounds, and shapes, and other critical skills like listening and following directions. For example, Movi Says works just like Simon Says, asking the kids to do things like hop on one foot or touch their shoulders – but only when MOVI says. There are three game modes and six games to choose from, all selected from buttons on MOVI’s tummy. Stay tuned for a full review, coming soon!

This box set of interactive toys works alongside a series of iPad apps to help kids from as young as 4 to as old as 8 expand their vocabulary, practice math, and learn about shapes. The kit comes with download codes to get the apps for free, then add a neat physical element with pieces that can be placed atop the tablet’s screen. With Alphabet Kitchen, for example, kids help Elmo and Cookie Monster bake by placing one of the vowel letter pieces on the screen to complete a word. Older kids can play Addventure, finding the right counting piece to help an on-screen character successfully make it across a bridge, using addition and subtraction. You’ll get the most out of this kit with younger kids, aged 2-5. If you decide to leave the toys at home (though they do come with a convenient carrying pouch), the apps still work without them, and even without an Internet connection. But since the toys come with codes to download the apps for free, it’s a great pairing that combines screen time with tactile toys, and learning. Check out my review.

You’ll become the favourite parent, aunt, uncle, or friend, by grabbing a teen or pre-teen a pair of Beats headphones, emblazoned with the signature Beats “b” logo on the side of each earcup. These headphones come in a variety of cool colours, and come with a flexible headband, angled earcups, and a detachable RemoteTalk cable that lets you control music playback and take calls from a compatible iOS device.

This tiny, yet rugged, wireless speaker packs an audio punch, letting kids enjoy their favourite tunes both inside and out. It comes with a tear-resistant silicone strap that can be used to attach it to a backpack, and is fully waterproof. Kids can pair up to two devices to it at once, so multiple kids can take turns playing their favourite tunes; two can pair together for stereo sound; and it can be used as a speakerphone as well. It’ll play for up to six hours at a time – long enough for background tunes while the kids get homework done, or to enjoy at the park after school.

Any child who’s a fan of Star Wars, and, let’s face it, any adult as well, would love this app-controlled droid that mimics the authentic movements and sounds of the BB-8 character from the movie. Control it via Bluetooth, and use the droid trainer to train your new toy. The coolest feature is that, if you watch select Star Wars films with Sphero BB-8 and use the Watch with Me feature, it will interact and react in real-time, along with the film. There’s also an augmented reality component whereby you can explore starships.

Help older kids hone their coding skills with the WowWee Coder MiP robot, which responds to movements, sounds, gestures, and commands that you program in the smartphone app. For example, you can have it bring something over to you on a tray, or drive over a ramp when you command it by swiping your hand in front of it, for example.

Get kids into virtual reality (VR) with the Noon Pro VR headset, which works with select

iOS and Android smartphones, allowing them to enjoy VR content with stereo sound thanks to the built-in headphones. Get several, and connect up to three via Wi-Fi to the same video source on a computer using the Noon VR Remote so the kids can share the experience with their friends or family – maybe mom and dad even want to join in on the fun.

Let the kids make fun, photo booth-like photos they can stick onto their notebooks, or in their lockers, with this portable printer that outputs

2×3” sticker photos from your phone, wirelessly. Use the app to customize the photos first, adding fun frames, emojis, or text, and even print directly from social media accounts. At just 6 ounces, they can take it anywhere, and each print comes out in under a minute. It works with the HP Zink Instant photo papers, which have the ink already built in, and comes with a 10-sheet pack. Grab some extra paper packs so the kids can experiment right away. 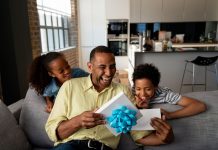 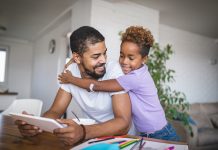