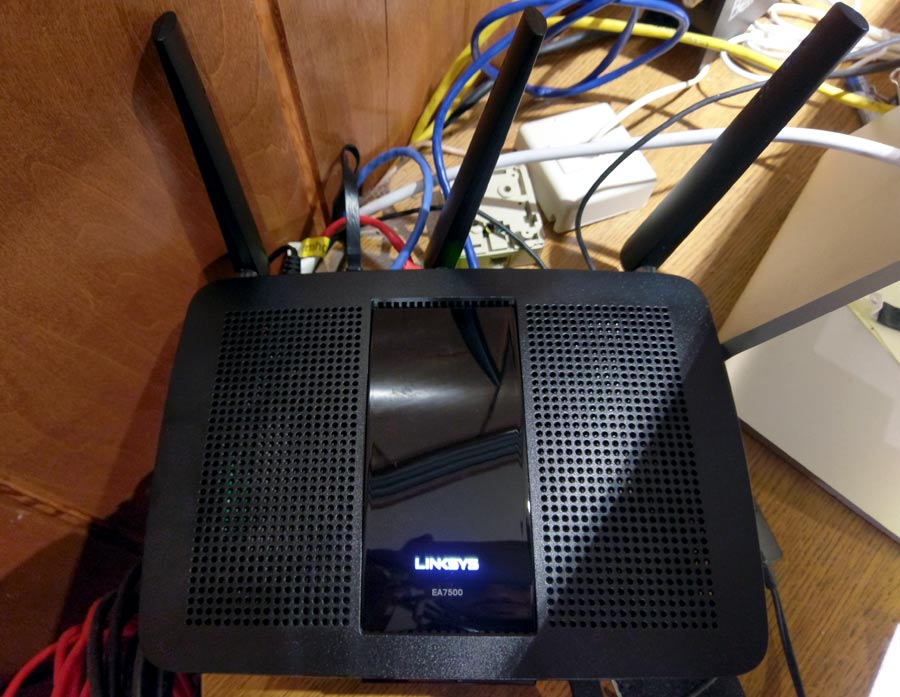 Choosing a router sometimes isn’t easy, and one of the main reasons why is assessing how one might be better than another. Another reason is how the one you choose will improve or enhance your home network. The Linksys EA7500 is a smart router that doesn’t look as flashy as others on the market, but is still outfitted with high-end performance and some future-proofing in mind.

Looking at the EA7500 off the bat, it would seem to be like other Linksys routers that came to market within the last 12 months. Being dual-band, the router splits a total theoretical bandwidth of 1900Mbps (600Mbps on the 2.4GHz band, 1300Mbps on the 5Ghz band), and offers MU-MIMO (multi-user, multi-input, multi-output) to improve connectivity and bandwidth throughput to compatible devices.

There are no major surprises here. The look of the EA7500 on the outside is very much in line with other Linksys routers that have come under the “EA” moniker. These look different from the black-and-blue WRT line that are generally bigger and include features tech-savvy network administrators love to have.

Hence, the list of connections is standard for a router of this calibre. There is one Ethernet port (in yellow) to get the Internet connection from the modem, plus four Ethernet Gigabit LAN ports for connecting devices with cables. There are also two USB ports, one 3.0 (in blue) and another 2.0. The former is great for plugging in an external hard drive to stream media and transfer files, while the other could do the same thing, albeit at a slower speed. It is a port to use for a printer that doesn’t have built-in Wi-Fi.

There are three antennas that screw in along the back that can be tilted or angled to spread out the connection, which is 3×3 Wireless-AC. This includes MU-MIMO, which is a nice addition, but won’t have an immediate impact because the new standard has to be supported at both ends. A laptop or mobile device must have it in order to take advantage of the advanced speed throughput it offers. Linksys is releasing USB adapters that will do that for Windows PCs, and possibly for Macs as well, so at least laptops or desktop computers aren’t far off that way.

Outside of that, there is little to set up or take notice of on the hardware side.

Linksys has done a great job in the last two years of streamlining the setup process using a web-based interface (you can do it on a tablet or through the Linksys Smart Wi-Fi app as well). The step-by-step guide was clear and concise, and I had the router up and running with a new network name and password within 10 minutes.

One point to note is if you’re using a DSL connection, it’s important to have the username and password for your account with your Internet Service Provider (ISP) handy because it can optimize the EA7500 for your connection. When I first tried setting it up, I opted to skip that section and encountered a frustrating setup where the Wi-Fi wouldn’t work properly. After a hard reset and inputting the info, the end result was smooth and precise.

The interface is a simplified dashboard that makes it easy to understand how to control the various aspects of the router. There are two networks working on the two available bands, with a third that can act as a guest network. The latter is off by default, but it’s easy to turn on and choose a different password so that friends and family can log on and not have access to the Smart Wi-Fi dashboard. 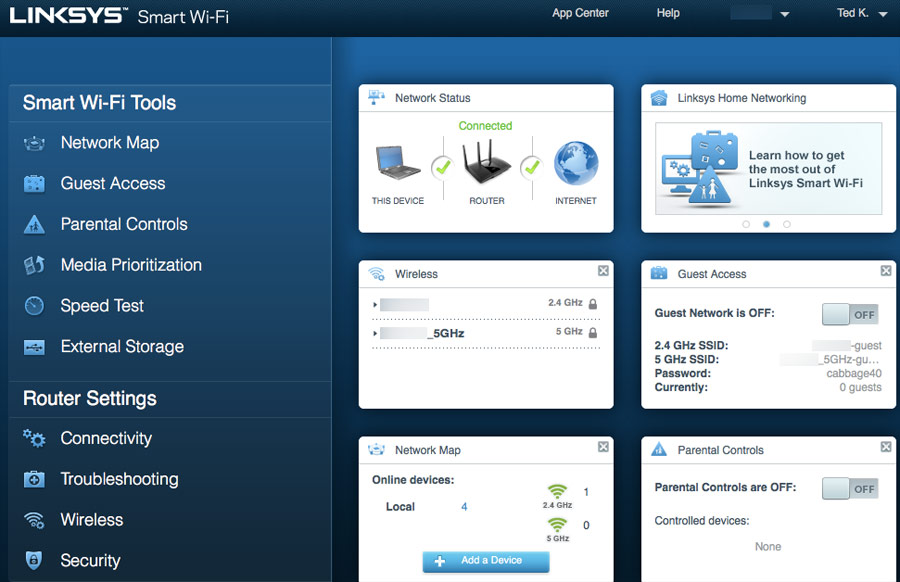 Plugging in an external hard drive is well worth it for the EA7500, given the excellent access and superb transfer and streaming speeds. For instance, a 2TB drive full of movies, shows, music and photos can be accessed from any computer or mobile device easily. With the right app on a smartphone or tablet, you can stream content and then push it to a TV using the Chromecast or Apple TV. Roku has a channel designed to see network drives, so that’s another option.

Unfortunately, backing up from a Mac through Time Machine doesn’t work because the drive’s formatting is incompatible. Backing up from a Windows PC, on the other hand, shouldn’t be a problem.

I used Media Prioritization to rank three devices or services I use most, so that they get preferential bandwidth allocation when they need it. MU-MIMO ultimately makes this redundant because all devices using that standard get the data they need simultaneously, not sequentially. This is relevant because devices have always had to queue to get the bandwidth they need from the router. It’s not something that becomes noticeable until a slowdown or buffering comes up, but that’s the way it works until MU-MIMO goes fully mainstream.

Like any dual-band network, some stewardship is required in managing devices. Low-intensity and occasional devices, like a printer, legacy tablet or smart bulb, could go on the 2.4GHz network, while the heavier gear used for streaming and downloading could go on the 5GHz one. Setting it up this way carries the benefit of a more efficient network and better bandwidth distribution.

In that respect, the EA7500 showed impressive speeds that were consistent, including better range than previous routers I’ve tested from the company, particularly on the 5GHz band. Strong signals, even when away from the room the router was installed in, held up well.

It got better when transfer speeds from the connected USB hard drive came into play. The combination of a strong Wi-Fi connection and fast data transfer speed made streaming a movie from an app on a Nexus 9 to the Chromecast seamless and satisfying. With an iTunes collection on the drive, I was able to stream from it on a Mac or iPad at home at all times, copying songs over at will when I wanted to.

The EA7500 doesn’t reach the throughput of more powerful routers, like those in Linksys’ WRT line, or even the Netgear Nighthawk X8, but as a mid-range router, it will serve any household with up to 10 devices well. Heavy duty users who need serious horsepower or more advanced features will probably want to look elsewhere.

This is a router that doesn’t require much work to set up, and any upkeep is easy to manage through the Smart Wi-Fi site or app. Advanced users who will want all the ins and outs of router administration will be disappointed, but there are other options better suited to them anyway. For everyone else that has relatively modest needs in bandwidth and throughput, the EA7500 is a good bet.