It’s been over ten years since I had a printer in the house, and to be honest, I haven’t missed having one.

So when HP asked me to try its HP Envy 7640e All In One Printer, I was skeptical. After all, if I’d gone this long without needing a printer, why would I need one now? It turns out the HP Envy 7640e is more than a printer: it’s also a copier, scanner and photo printer too. And handier than I would have believed.

The first thing I noticed is that in an era of tiny pocket printers and ultra portable printers, the HP Envy 7640e is big and heavy. It’s about the size of a small microwave, and reminds me of something you’d find in an office. (According to HP’s specs, its actual weight is about 17 pounds!) That said, it does do a multitude of tasks well-suited to a small or home office that will also be handy for regular family uses at home.

The HP Envy 7640e is a wireless printer that is also a fax, scanner, photocopier, and photo printer, and it can do everything wirelessly, which is the biggest difference for me, particularly because the last printer I had used heavy cables the size of small snakes.

Once I had the printer in my home office, it was time to unpack. There is a ton of tape and cardboard and other packing materials to remove from the printer before you can get started. HP supplies a bit of a roadmap for unpacking the printer correctly, as there’s even some paper, cardboard and tape inside the various components to keep them secure during shipping. The printer has a large flatscreen scanner, and a document feeder lid that operates a lot like the one you’ll find at your office, as well as separate photo and regular paper trays, all of which are easy to get set up.

Set up wasn’t instantaneous, but it was pretty easy. A really handy feature for set-up and troubleshooting, the Envy 7640e has a 3.5 inch or 8 cm color touchscreen that shows tutorials and gives clear instructions for whatever you’re doing. I had a little trouble calibrating the printer, which is one of the first steps, and it turns out I should have installed the ink cartridges first, (which the helpful little animations on the printer’s digital set up screen didn’t tell me), but I figured things out quickly enough. Then it was on to configure the Wi-Fi connection for the printer. That went relatively smoothly and it seemed to connect to my home’s Wi-Fi network right away. From there it was a simple matter of downloading and accessing HP’s ePrint app, telling the app to find the printer, and within a couple minutes I was printing photos!

Scanning with the Envy 7640e Document scanning was my next test. As it turns out this was a timely test, as I had some documents that needed to be signed and sent off. Usually, I sign documents, take a photo of them, then email the photo to the recipient. Using the HP Envy 7640e to do that was a bit more time consuming than my hack, at least initially.

The printer told me that to use its ‘scan and email’ feature the printer must be connected to the network and the internet, and while I thought it was, it wasn’t working. Fortunately, the printer itself was helping me through the difficulty. The Envy asked me if I would like to print a report about why the printer was not configuring itself properly. I agreed, and it printed out a handy sheet of instructions on how to set up my network router properly.

While I sorted out the router troubles, I decided to try to print a basic document from my phone to the printer.

The first thing you need to do for that, is to find compatible document creation software. Google Drive, Evernote, and Dropbox are the top ones that are available, and hooking up my Google Drive account was quick and easy. Once logged in, you select the document you’d like to print, choose from the many print options (like colour vs black and white, one or two-sided, paper orientation) and then hit “print”. The document spit out in about 10 seconds.

I was also able to set up to print from my Apple laptop in seconds, and now I’m able to print emails at the touch of a button, then go collect them from the HP Envy 7640e in my home office. No lugging the printer or computer around, or connecting cables and waiting. I’m finding it super handy to be able to print from anywhere in my house and from any of my devices. Then it was back to attempting to scan a document. Since I didn’t seem to be able to scan the physical papers into the printer using the 25-page document feeder, then email it to myself (my router may not be compatible, as it turns out, but no matter), I thought I would try a different route.

This time I started with my phone, and selected ‘scan’ on the ePrint app. It opened up a viewing window onto the 7640e’s scanner bed. I put a document on the scanner bed of the machine itself and hit start. The Envy scanned the document and it showed up after about 15 seconds, right on my phone. You can also preview the scan first before you commit.

From there, I had options to change the orientation, crop the scanned image, and make other adjustments. After that I was able to share it: via email, by posting to Facebook, putting it on Google Drive, or even saving it to my camera roll. There is some serious versatility here that I’m impressed with. You can also choose to output the scanned documents in a variety of formats: pdf, bmp, jpg, gif, tif, tif, png in 1200 dpi resolution.

The photo printing feature is one of my favourite uses for the Envy 7640e. I just selected a photo from my iPhone 6, popped special photo paper (either 4 x 6″ or 5 x 7″) into the dedicated photo tray (which also means I don’t need to pull out the regular 8 1/2 x 11 paper and make a swap), and sent the image directly to the HP Envy printer from my smartphone. It printed immediately.  Having photo printing capability is a great way to print all those photos that normally just sit gathering digital dust! I also think it’s a great option to have professional quality edge-to-edge photo printing available from one device, so you don’t need a separate photo printer.

One of my major beefs with owning a printer hasn’t been with the cost of the printer itself, it’s been with ink cartridges that cost more than the printer! So I priced out the HP Envy’s ink cartridges, which HP says are “high-yield,” and they’re about $40-50. Regular yield cartridges are closer to $20.

HP is also touting it’s “Instant Ink” service for cartridge replacement. It monitors the number of pages you print, and then orders ink delivered to your door before you run out. “With our HP Instant Ink replacement service, you select your plan and we take care of the rest. You’ll never run out of ink and printing will cost a lot less.”

The cost is about $3/month if you print about 50 pages, up to about $10/month if your volume is more like 300 pages. HP says ink, shipping, and cartridge recycling are included in their monthly plans, which are based on pages printed, not cartridges used. The info on how to sign up comes with the printer, or you can get more info at hpinstantink.com.

Another option is to order ink online at BestBuy.ca.  Set a reminder in your calendar for a month or two down the road, with your printer model. Then the ink will be delivered to your home when you need it.

For its price point, this printer does a lot, and since it’s now easy to print documents, photos and emails wirelessly, I’ll admit I’m getting used to having a printer again. The biggest knock on this device is its size and weight; you’re going to want to put it somewhere where it won’t need to be moved. I also found the Envy quite fast. While I was testing by printing one document at a time, it took about 15 seconds for the document to emerge from the Envy after it was in sleep mode, and just 5 seconds once it was already awake.  For me, that’s plenty fast enough.  I also didn’t get any paper jams, another frustration, but I also didn’t get to try printing a super high volume of pages.

Of course, most people’s satisfaction with their printer comes from how long the ink lasts, and how much the cartridges cost to replace. I can’t accurately report on that yet, as I’ve probably only printed 20 pages so far over a few weeks, but I’ll post updates as needed.

In all, I’m pretty happy with the versatility of the HP Envy 7640e. It does everything I could want, and more (since I may never ever find use for the included fax capability!). If you’re looking for more feedback on this printer, BestBuy.ca customers give it 4/5 stars online.

Get the HP Envy 7640e All In One Printer from Best Buy! 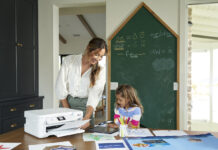 Do you need a printer for school this year? 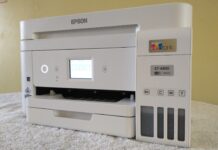