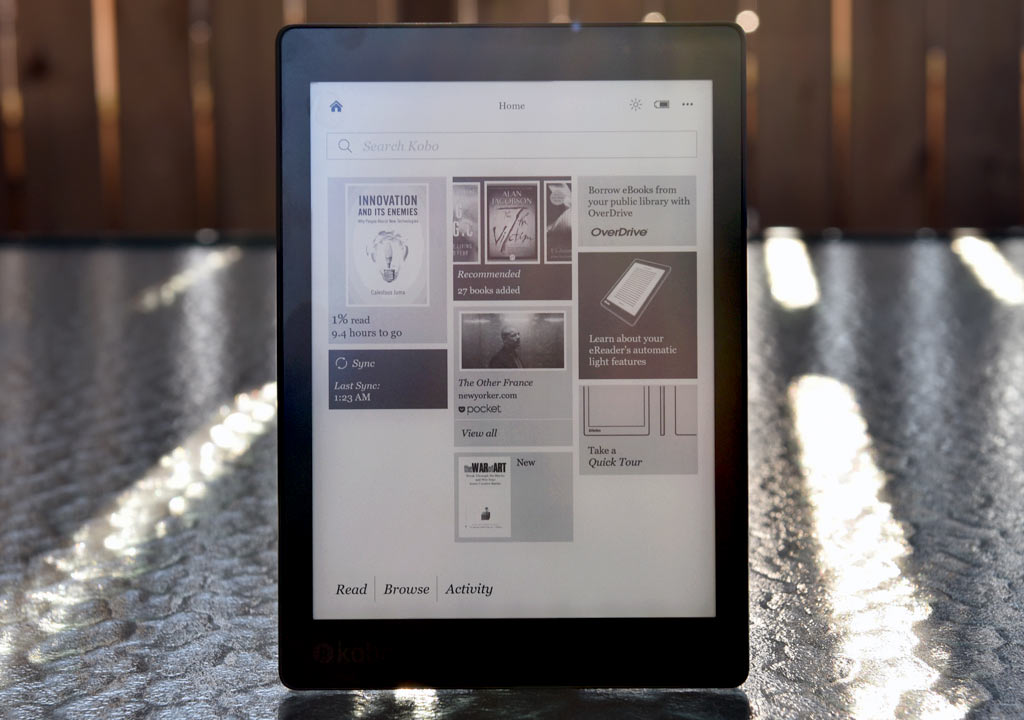 If you’ve ever complained about an eReader being too small, then the Kobo Aura One is probably for you. The latest model from the company is bigger than the rest, and by adding waterproofing, plus a nifty screen with natural light settings, it amounts to one of the more compelling eReaders available.

Kobo says the Aura One was designed based on feedback from consumers, which might explain its size and feature set. While tablets have shifted in size, weight and performance, eReaders are in a separate class because they’re tasked with doing one thing well: reading.

The most obvious design feature is the 7.8-inch Carta E Ink display, a touchscreen of significant size by eReader standards that makes it roughly the size of a hardcover. It’s also edge-to-edge for a seamless touch all around, removing any indents for the bezels. Then there’s the 300dpi resolution, putting it closer to what printed text on paper looks like.

The ComfortLight Pro display carries more weight because of how the lighting works. The Aura One works just fine in darker settings because it has an adjustable light (it’s on auto by default), only there is a natural light setting that adds more ambience to benefit your eyes. It works by following the sun’s natural progression, giving it a yellow and orange hue as the sun rises or sets and can keep it that way during the night. The reason for this is to remove blue light and soften the tint to go easy on the eyes, especially before bed.

Outside of the power button on the back — noticeably blue for an otherwise neutral colour scheme on the device — there is a microUSB port at the bottom, and that’s it. One thing you notice about an eReader is that it isn’t outfitted with ports and connections to distract from the primary purpose. Want to listen to music while reading? Bust out the smartphone and play the tunes from there.

That simplicity permeates throughout. The back is a nice rubberized plastic that offers a good grip. Inside, all components are coated to save them from water damage, thereby making the Aura One waterproof with an IPX8 rating — submerged for up to 60 minutes to a depth of two metres. This isn’t the first time Kobo has done this, of course. The Aura H2O held that distinction when it launched last year.

Note that the waterproofing refers to clear water, not saltwater. Taking this to the beach is fine, but it’s best to avoid sand whenever possible. It can rinsed away, but if it gets into any crevices, it can be a pain to wash away. Salt also has a nasty habit of finding its way through things, so best to stick to the pool and leave it at that. 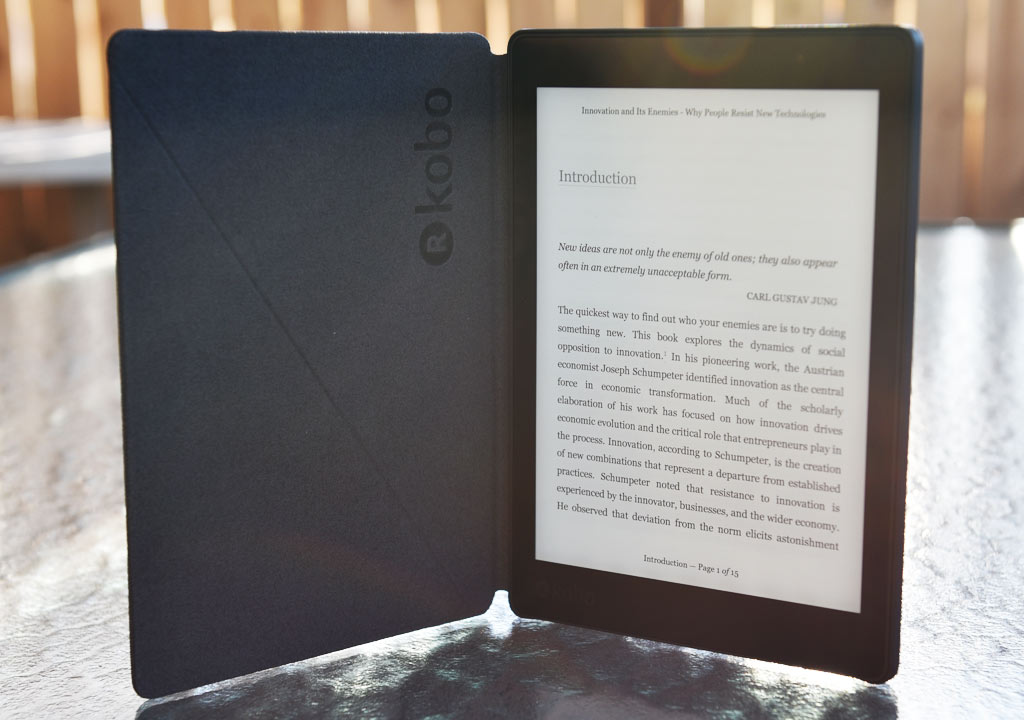 Setting up the Aura One is no different than any other Kobo eReader. Once I logged on to my home Wi-Fi and signed in to my account, everything was laid out for me on the home screen. I then logged in to my Pocket account for whatever articles I added from the web, and I was ready to go. Kobo changed little to the interface, so graduating from one of last year’s models to this one would be a seamless transition.

One thing that was added was OverDrive, a service now owned by Rakuten (Kobo’s parent company) that connects directly to participating public libraries. Signing for an account is free, but in order to borrow or buy books, you need to have a library card number. It’s a neat feature that expands eBook access, and it currently works with participating libraries in Canada, the U.S., U.K., Australia and New Zealand.

Adding books from third-party sources manually is another option. Whether it be out-of-print or copyright-free books, they are fair game on the Aura One so long as they are in one of 14 supported file formats. PDF documents are readily supported, so reports and things of that nature work just fine on the device.

With 8GB of internal storage, Kobo says that’s good for up to 6,000 eBooks. That’s more than enough for most people, I would say, and the ability to add content from various sources, including the Kobo store itself, sets the stage for a lot of reading.

The larger display fits in more text, though font and text size is always adjustable through the settings. The assisted reading features are pretty much the same, too. Holding a finger down on a word will pop up a definition. Dragging a finger to highlight a passage lets you add notes. Tapping the top right of the page bookmarks it. Swiping up and down adjusts screen brightness. Swiping left or right can turn pages, or a simple tap will turn to the next page.

Because the brightness and natural light settings are on auto by default, they gradually shift depending on the time of day and ambient light. For brightness, this is the same as it’s always been. For the newer natural light setting, it depends on your bedtime. The closer to it you are, and the darker it is, the more the orange hue kicks in. For bedtime reading, it works well, and my eyes didn’t feel tired because of it. 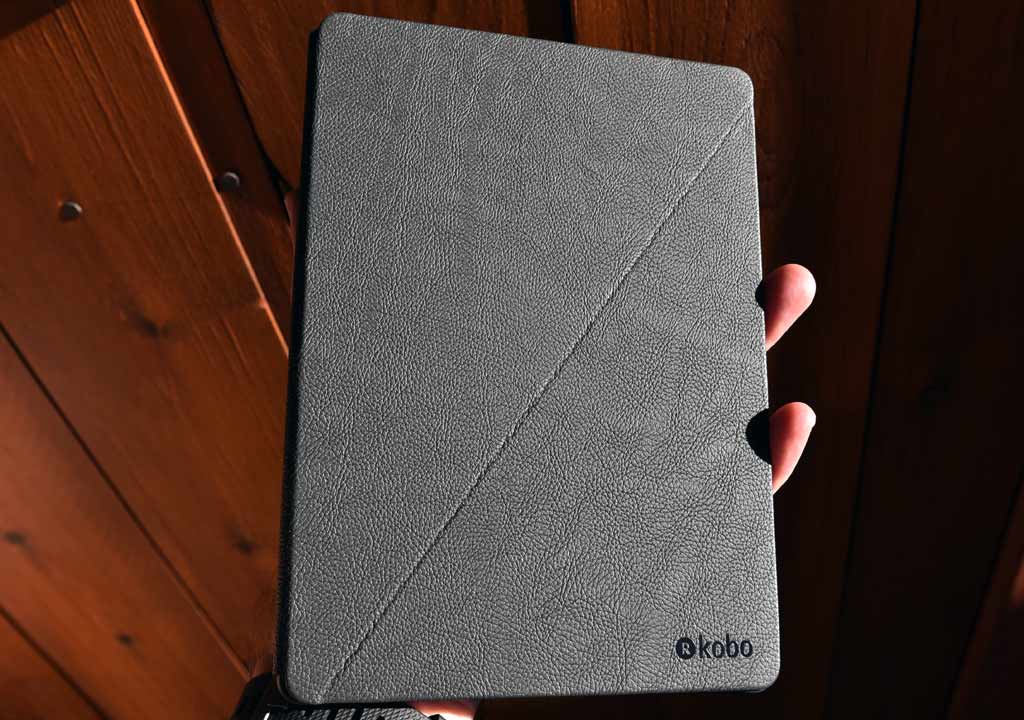 The Aura One Sleepcover case is much like its namesake implies: close it and the eReader goes to sleep; open it and it lights up again where you left off. It doesn’t come bundled with the device, but is a worthwhile addition if you want to protect it. For practical purposes, the fold in the front can act as a stand when the front cover is pulled back for hands-free reading.

Unlike tablets, eReaders can go on and on for weeks without needing a charge. The Aura One doesn’t offer 60-day battery life like some other eReaders do, but up to 30 days is still excellent in my books. The larger display and lighting features are going to take more out of any battery, so this was hardly surprising. Turning off Wi-Fi when nowhere near a network (like a beach or plane) helps keep the battery going longer.

Still, I had the Aura One for just under a month and didn’t need to charge it yet. The act of reading off of it isn’t what would kill it anyway. Screen brightness is the biggest culprit, except you would only really need to go really bright in really bright situations, like direct sunlight or a super bright room.

If a big E Ink display is what you’re looking for, then the Aura One is the biggest yet. It makes one-handed operation a little challenging, so that is one trade-off to deal with, but it’s a worthy one for what you get here. I would really only recommend this device to users who are going to make good use of it. Avid readers are obvious, and casual ones are fine, too, but this shouldn’t be something that festers forgotten in a drawer.

The Kobo Aura One is available now.