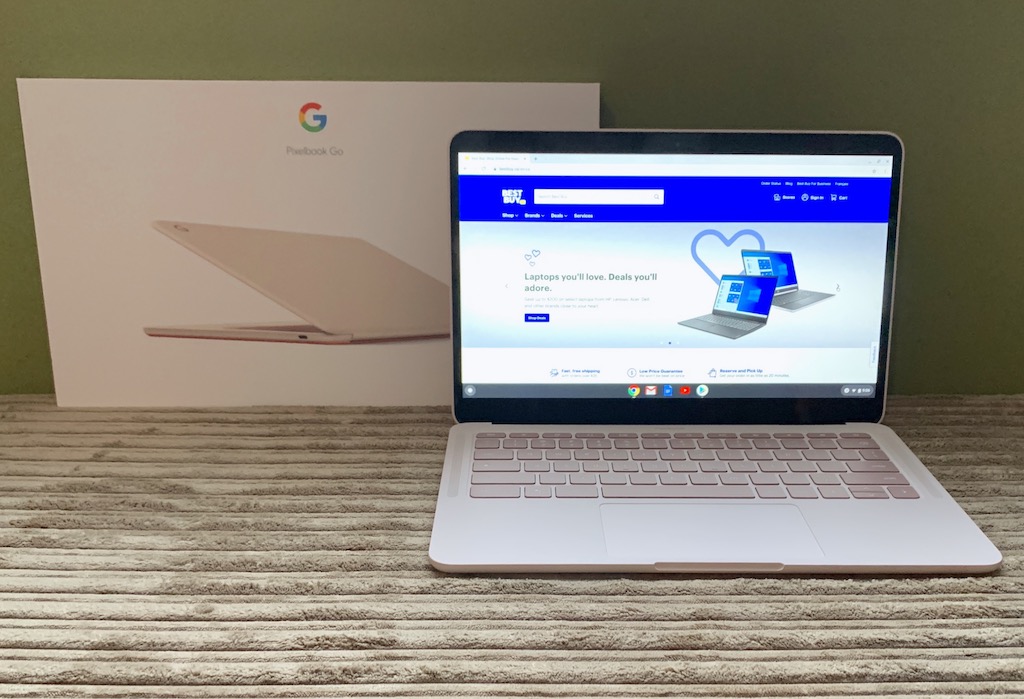 When Google released the Pixelbook Go last fall, naturally Best Buy Canada’s blog had review units right off the bat. Ted Kritsonis published a detailed hands-on review in November (you can read it here). But that was the “Just Black” version of Google’s new premium Chromebook. The company also announced a “Not Pink” colour option that wasn’t available at launch. For those who want to see exactly what Not Pink looks like, I wrapped up my evaluation of one a few weeks ago. And as part of that testing, I discovered just how user-friendly the Pixelbook is, even for someone who may be a little tentative about the prospect of setting up and using a new laptop. 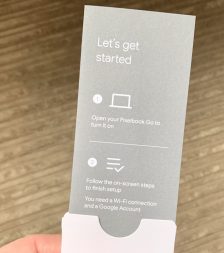 The Pixelbook Go arrived attractively boxed, with minimal packaging. Pop the lid and you see the Chromebook itself, wrapped in cellophane. A card shows just how simple setup is, and beneath that is the charger and a USB-C cable.

Google shipped the Pixelbook Go partially charged, so as soon as I opened the lid, I was greeted with a welcome screen. You should always connect a laptop to power when doing updates, so before doing anything else, I plugged in the Pixelbook Go. The charger uses USB-C, which greatly simplifies matters.

The Chromebook is equipped with a pair of USB-C ports, one on each side, and either can be used for power. The included cable is USB-C on both ends. There’s no guessing about what goes where, and with USB-C you don’t even need to worry about which side of the connector is the top. Simply plug one end of the cable into the power adapter, the other end into the laptop, and plug the charger into an electrical outlet. 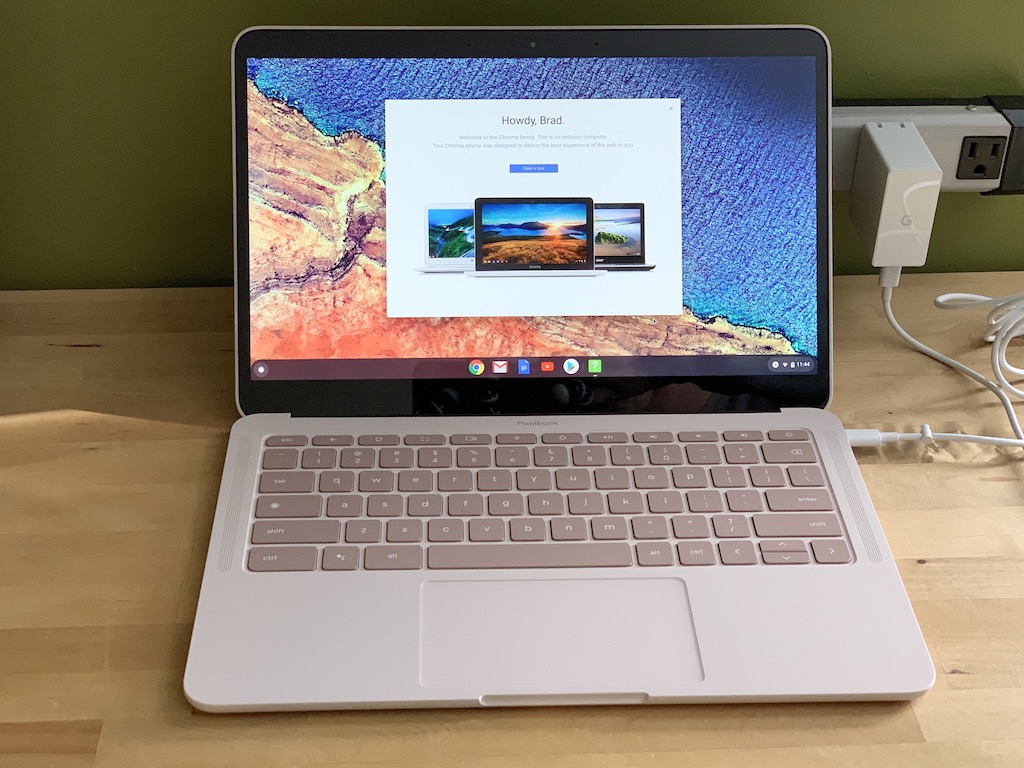 To continue with setup, you need two pieces of information: your Wi-Fi password, and your existing Google account name + password. If you don’t already have a Google account, no worries as the setup will walk you through creating one. 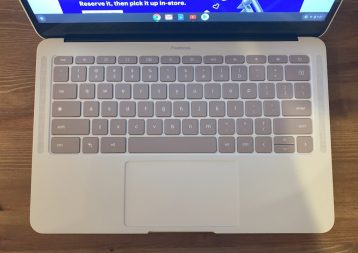 From this point, the Pixelbook Go takes the lead, walking you through a short setup process. This includes the downloading of a system update (it’s automatic) that takes a few minutes but ensures the Chromebook has all the latest features and security updates.

The Pixelbook Go itself is an attractive piece of hardware. It’s slim and extremely light, but feels very sturdy thanks to its magnesium case. The bottom is unique. It’s rippled, and painted so that it feels a little grippy, making it very easy to hold onto the laptop when carrying it. The display is crisp, bright and colourful. The backlit keyboard with Hush Keys is wonderful and a huge improvement over the keyboards offered by most laptop makers. 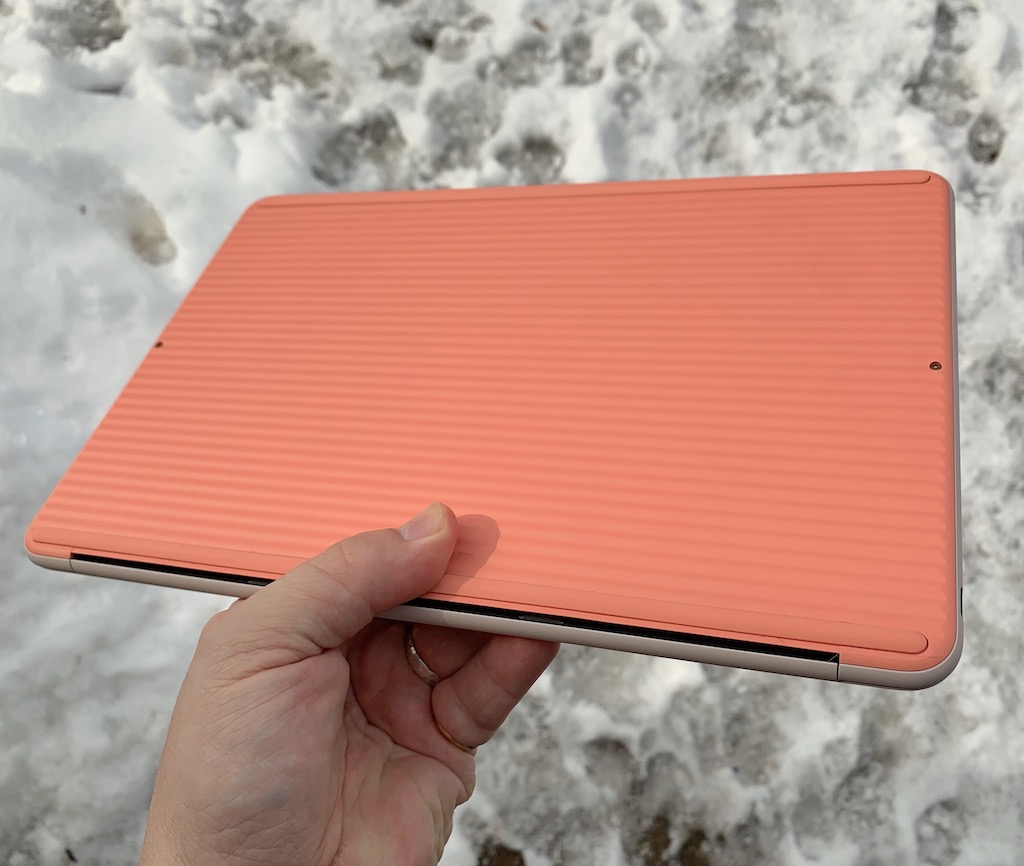 I have a few views of the Not Pink colour in different lighting in the accompanying video. It was a nice change and my wife quite liked it. If you want a change from silver, black or gold laptops, the Pixelbook Go’s Not Pink might do the trick.

The Pixelbook Go is a great laptop for content creation. Whether you’re using it to catch up on work, to do homework, or to edit digital photos, it has the specs needed to get the job done. That keyboard pays off big-time when there’s typing involved, and the display is crisp. Between Google’s suite of applications (like Google Docs), and the Android versions of Office 365 and other content creation apps available on Google Play, this is a very capable Chromebook.

12-hour battery life means you can put in a full day at the office or at school without having to lug a charger with you. 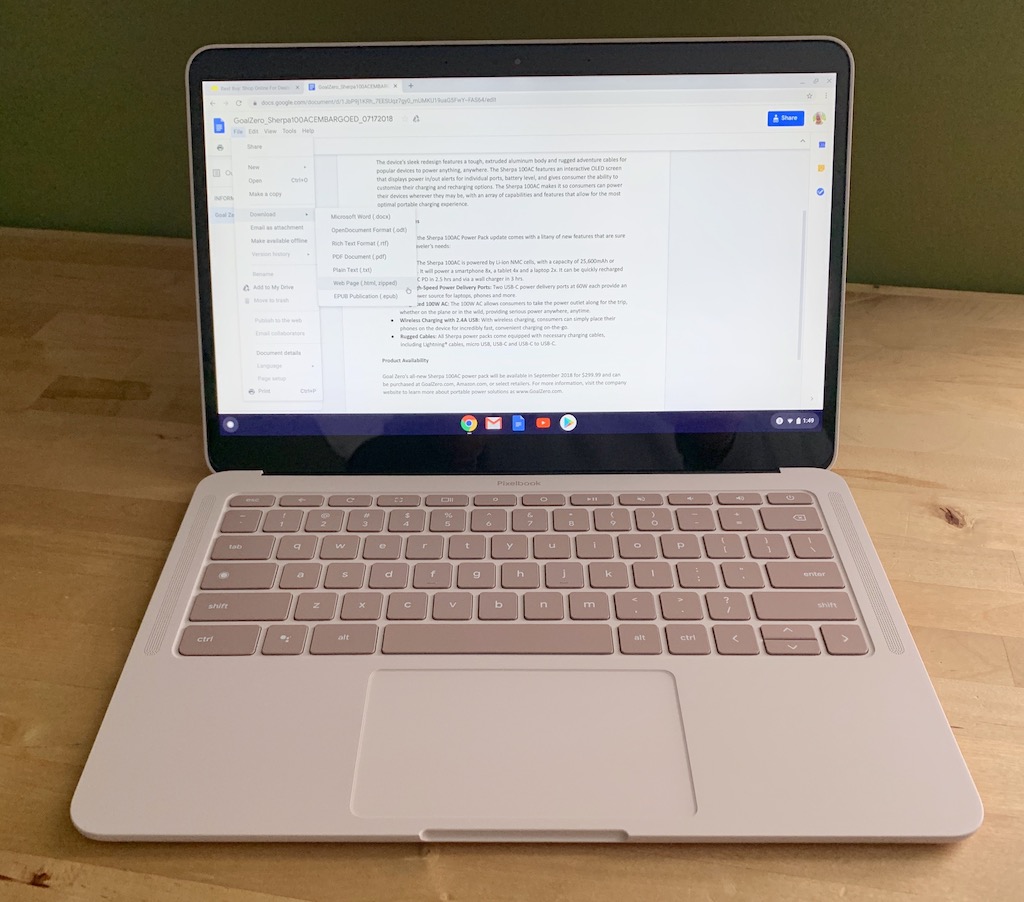 My daughter already uses a Chromebook for school, and having the Pixelbook Go here made the experience of helping her with an essay a breeze. Like many schools these days, hers uses Google Docs for assignments. Rather than the two of us hunched over one laptop, we sat together in the living room with our own laptops, and she used Google Docs to share her work with me. I was able to open it on the Pixelbook and we could both make edits that were updated in real time. It was an incredibly productive and collaborative way of working.

And with an internet connection, she could have been sitting in the school library and we could do the same thing…

The Pixelbook Go excels as an entertainment device. The 16:9 aspect ratio is excellent for watching streaming movies. Some reviewers have been found the stereo speakers underwhelming, but to me, they were among the best I have heard on an ultra-portable laptop. They may lack a little bass punch, but audio had depth, clarity (without being tinny) and could reach significant volume.

It can also be used for mobile gaming. The one downside here is that although the Pixelbook Go can play Android game apps from Google Play, they are often optimized for a vertical screen (a smartphone or tablet). Unlike 2-in-1 devices, the Pixelbook Go isn’t designed to be used as a tablet.

And don’t forget Google’s Stadia gaming service! Check out Jon Scarr’s post showing just how easy it is to set up a Pixelbook Go for gaming using Stadia.

The Pixelbook Go automatically checks for system updates when it’s connected to the internet. You’ll see a notification any time it has detected and downloaded an update, and any time you restart the laptop those updates will be automatically applied. This ensures your Pixelbook Go is always up to date and equipped with the latest security protection.

This would be the Chromebook I buy, but maybe not my choice of colour 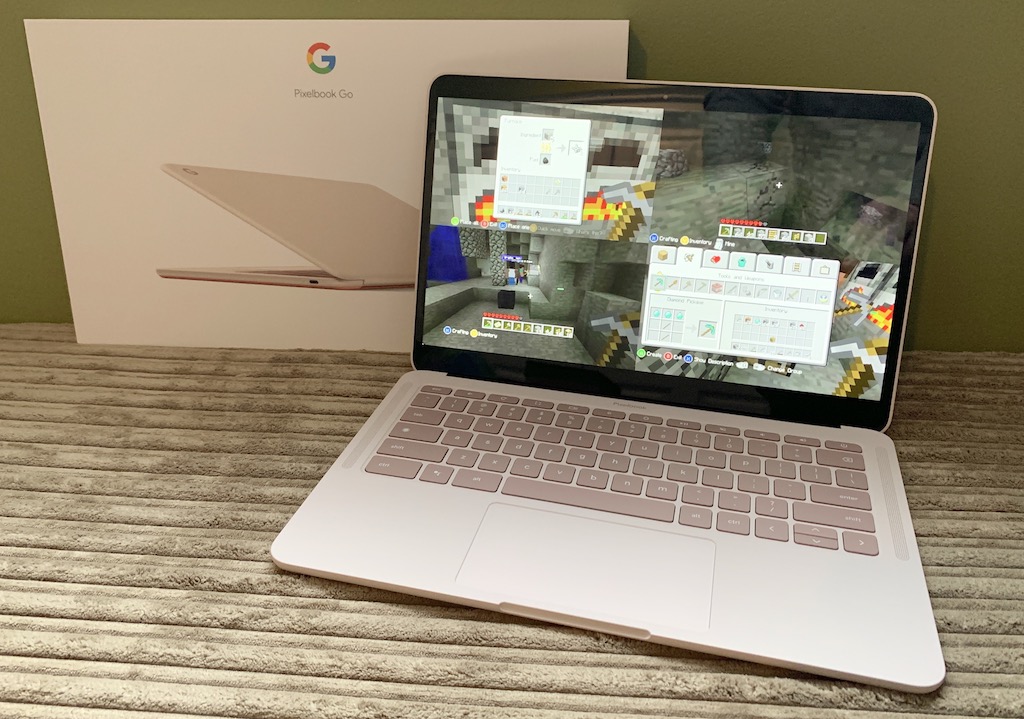 The Pixelbook Go review unit I had was a mid-range model. That means a 13.3-inch Full HD display, an 8th generation Intel Core i5 CPU, 8GB of RAM, and 128GB of SSD storage.

There are additional options offered, including a more affordable version with an Intel m3 CPU and 64GB of storage and a souped up model with Google’s 4K Molecular display, an Intel Core i7 processor, 16GB of RAM, and a 256GB SSD. Personally, I feel the version I evaluated hit the sweet spot. It has the power to do anything I want it to and plenty of storage for a Chromebook. As awesome as a Pixelbook Book Go with a Core i7 and 4K display would undoubtedly be, that’s probably overkill for anything I would be using a Chromebook for…

While Not Pink was interesting and a refreshing change from the usual variations of silver or grey that most laptops use these days, my personal preference would be Just Black.