If you’re into PC gaming or online console gaming, the weakest link in your setup is often Wi-Fi. Any lag can mean the difference between victory and defeat, and wireless connections are also susceptible to interference and network congestion. That’s led many gamers to ditch the convenience of wireless, instead running Ethernet cable between their router and their gaming device. Netgear has heard the concerns and at CES 2018, the company announced a groundbreaking new product: the Netgear Nighthawk Pro XR500 Gaming Wi-Fi Router.

Netgear says it worked closely with gamers to design the new XR500 NIghthawk Pro Wi-Fi gaming router. So making certain that the PC and console gaming experience is the absolute best it can be was the primary objective.

Starting with the basics, the router offers AC2600 dual-band Wi-Fi for the throughput needed by high demand gaming and 4K video. There are four Gigabit Ethernet ports for ultra-fast wired connections. Four high performance external antennas ensure the Wi-Fi signal reaches your PC and other connected devices, no matter where they are in your home.

From there, Netgear seriously beefed up the specs of this router. The CPU that manages the traffic is a dual-core 1.7GHz processor equipped with 512MB of RAM (plus 256MB of flash memory), providing the muscle to handle more connected devices. MU-MIMO technology is included, with support for four simultaneous Wi-Fi streams and beamforming to actively target connected devices.

Then more gaming specific features were added. Software optimizes network connections by stabilizing ping, reducing lag spikes. That includes QoS controls to ensure your gaming PC is first and foremost, and geo filtering to connect to the closest possible game server. A gaming VPN takes care of security, and a network monitor can detect any bandwidth-hogging devices that might impact your Wi-Fi network’s performance. Netgear also offers a Gaming Dashboard in its management software, where you can view important details like real-time network bandwidth utilization, ping delays and other factors that could affect your online gaming experience.

For those intense LAN parties or any gaming application where wired connectivity is still preferred, Netgear also has you covered. Another CES 2018 announcement was the Nighthawk Pro Gaming SX10 8-Port switch. This switch is designed to eliminate lag with near-zero latency. Each port can be customized with coloured LED lights and there are five different connectivity speeds offered: 100Mbps, 1Gbps, 2.5Gbps, 5Gbps or 10Gbps. Network management uses an interface that’s optimized for mobile devices and includes features like advanced VLAN and QoS controls and a Gaming Dashboard to monitor performance in real time. Operation is silent and fanless, thanks to a heat dispersing aluminum enclosure.

With link aggregation, the Nighthawk Pro Gaming SX10 can attain up to 20Gbps transfer speeds to networked devices.

Look for the Netgear Nighthawk Pro XR500 Gaming Wi-Fi Router and Nighthawk Pro Gaming SX10 8-Port Switch to join the extensive selection of wired and Wi-Fi routers at Best Buy. And don’t forget to keep checking Plug-in for all the latest reveals from the 2018 Consumer Electronics Show 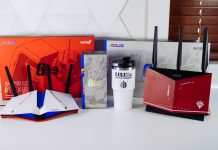 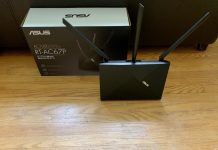