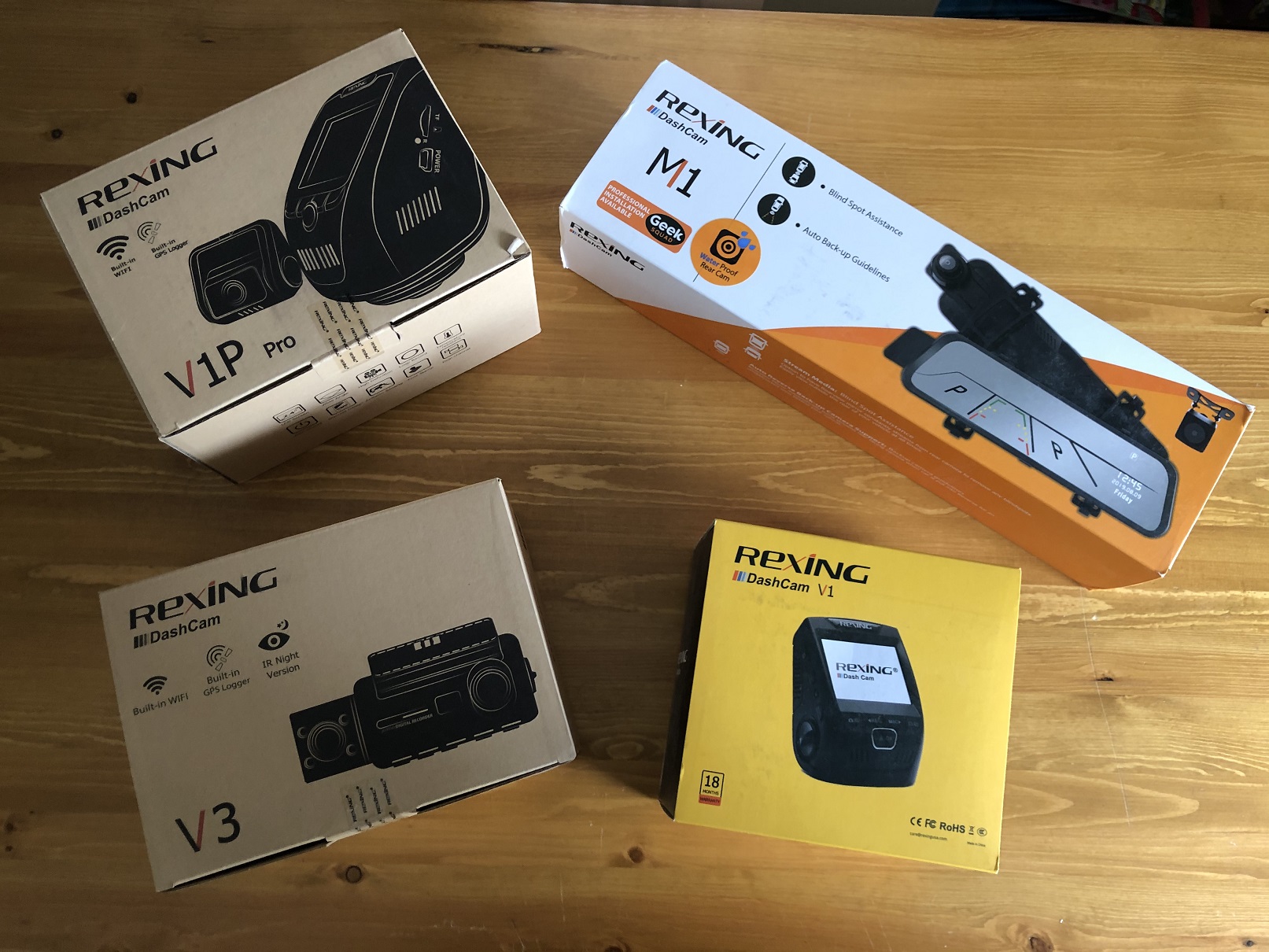 The Rexing company have been players in the dashcam market for the better part of the last half decade, and their cameras are now available at Best Buy. In this blog, I’m going to focus on reviewing the Rexing M1 Dash Camera, but will speak to three other models that are available too. Let’s start this review with the Rexing M1 Dashcam, which I’ve been driving around with in my SUV.

The Rexing M1 Dashcam’s installation is mostly plug and play. Installing the front unit itself isn’t difficult. It’s a 10 inch touch screen that sits on top of your existing rear view mirror with the attached rubber clips. The front camera is built into that unit, as are all of the power functions and an onboard G-Sensor. If you’re unfamiliar, the G-Sensor essentially starts recording and locking footage the moment it senses your vehicle has been impacted. It’s a helpful feature to have since your first priority in an accident is usually safety and not whether you’ve got a camera recording!

The power/charging unit plugs right into the vehicle power socket (aka the cigarette lighter port) and then into the camera up top. The same goes for the water resistant rear camera. It comes with an 18 foot cord which you can easily thread and hide in your vehicle while simply feeding the power source to the camera up front. All wires are long enough for you to thread throughout your vehicle in order to hide things as discreetly as possible. Rexing’s videos show the rear camera mounted to the top of the inside of a vehicle facing out. My SUV has tinted windows in the back, so I chose to mount the rear camera in the license plate well.

There is a backup feature on the rear camera, but Rexing recommends you permanently affix one of the wires to your left rear light. I did not do this for the purpose of the review because I am returning the camera, but this is advised to properly align the backup camera feature’s lines. The rear camera still functions without this hookup, but not as a dual backup camera.

That’s basically all it takes to install, as plugging everything in is pretty self-explanatory. You’ll also need a MicroSD card to record and capture footage, which is not included in the package. This is fairly stock standard for dashcams though, as very rarely do they come included. This camera can also support memory of up to 256 GB, which is double the previous largest number I’ve ever seen. The camera will also format the card to its specifications itself, meaning you don’t have to worry about how to properly reformat to a specific spec. If you’ve read some of my other reviews, cameras typically require you to format larger cards down to FAT32 partition, which modern operating systems don’t have as a native feature and require 3rd party software to achieve. With a 256GB card, you’ll probably be able to record footage for literally months without footage overwriting itself. 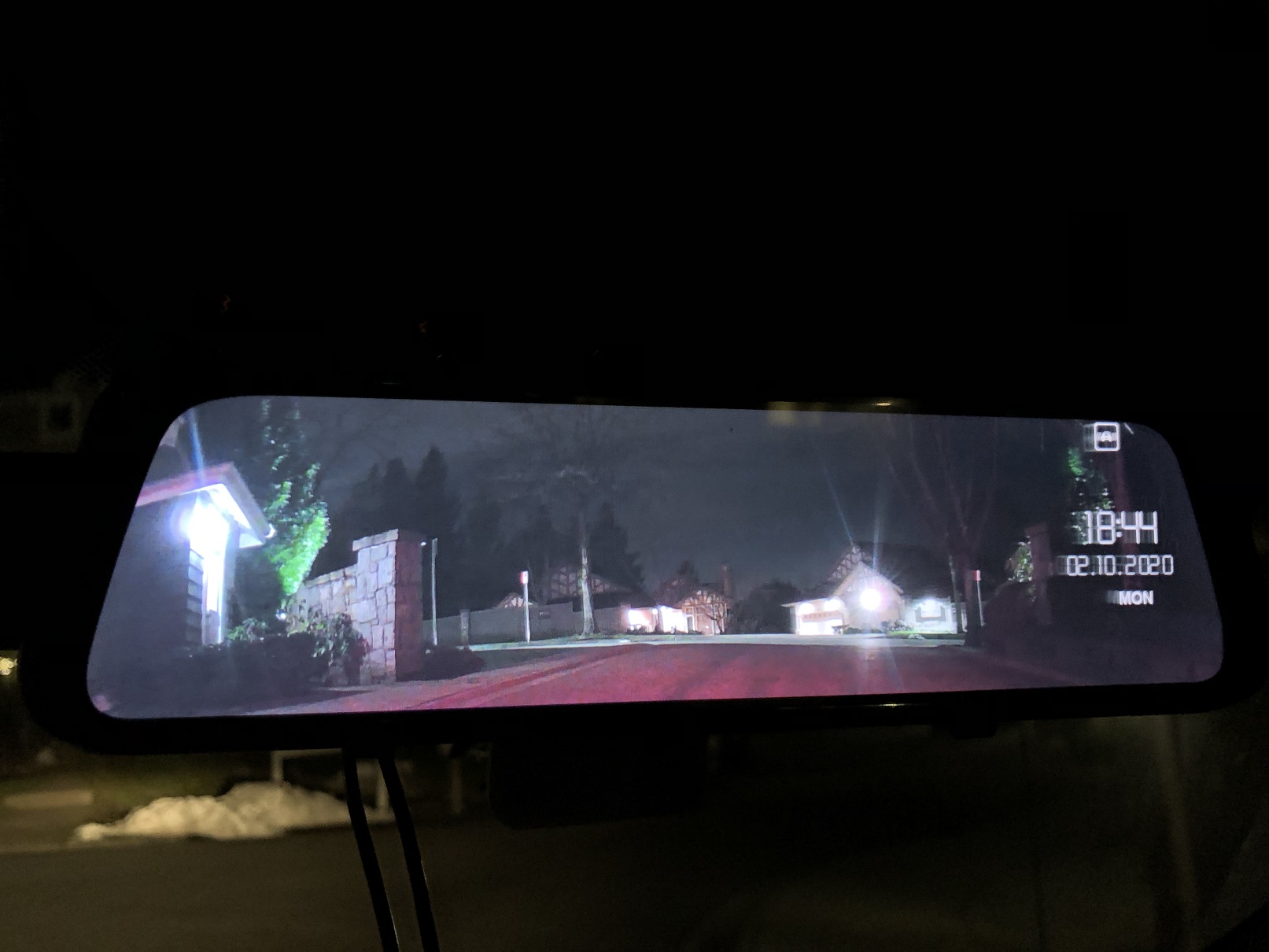 Rexing M1 Dashcam comes with a large field of vision

One of the biggest benefits of this camera is its large field of view, which includes the camera unit itself. It’s a large 10 inch screen and is one of the most colourful realtime views I’ve seen. The front camera records in 1296p, while the rear camera records at 720p. The rear camera has an outstanding field of vision. I can’t believe how much of a wide angle there is and how much it captures around you. In fact, even though I had the camera where I thought it was low, I still had to tilt it downward to capture the road properly.

One of the things that you do need to be aware of though is that depending on local rules and regulations, it should have a direct effect on where you place your rear camera. In BC, for example, the Motor Vehicle Act requires you to have an unobstructed view of the rear of your vehicle. It also means that you should be installing that rear camera in a place where you can capture what’s happening behind you at a clean angle. The camera itself defaults to always showing the rear camera out the rear view mirror, so you don’t have to tinker with that setting at all.

How functional is the Rexing M1 Dashcam?

I was very skeptical when I started reviewing the Rexing M1 dash camera. I didn’t know how I would like what was basically a brand new rear view mirror. It’s really grown on me though. As I mentioned earlier, my rear window is tinted. It’s not all that pleasant to look out the rear view at night especially. Having the camera on the outside displaying a bright and vibrant view of the rear did take a bit of getting used to, but is probably my favorite extra benefit of this camera. The skeptic in me changed immediately the first night I was driving home at 10:30 PM to a well lit and bright view from my rear view. The camera captures and binds full audio from inside your vehicle to the video footage as well, but I didn’t find the sound to be as clear as I did on a couple of the JS audio models I reviewed. Nobody wants to hear you singing along to Lady Gaga crystal clear in your car anyway and the audio feed is clear enough to capture surrounding sound well enough.

Viewing footage is pretty easy. You just have to disable recording, which then enables the ability to view your footage. You can catch any of your continuous loops by date and then view directly from the front camera screen. Additionally, you can pull the microSD card out of your camera and bring it to a PC to review footage as well. Unfortunately, there is no Wi-Fi functionality on this camera and no supporting app for it. I’d say that this feature has only been 50/50 on the previous dashcams I’ve reviewed, but it’s one of those things I miss when I come across a system that doesn’t have one.

Is the Rexing M1 Dashcam worth the price?

I find that the main camera unit itself is both the Rexing M1’s greatest selling feature and its greatest consequence. While I really like the 10 inch screen and think that good installation could actually lead to a better and safer view behind your vehicle, you will have to really play with the way you have it set up in your car. From certain angles, the camera projects a fair amount of glare from the lights of the vehicles behind you. You may think that the solution is just to move your rear view mirror into a convenient spot for your eyes, but you also need to keep in mind that you could be affecting what the front camera captures since it’s all attached. My advice would be to unplug the rear camera while the car is parked and tinker around a bit until it’s in the right spot. I’m also not the biggest fan of wired installation, which you’ll have to do if you want to take full advantage of the backup camera’s options.

There are some things with this camera that I am a huge fan of, however. This is the first dashcam I’ve reviewed in recent memory that has a functioning internal/emergency battery. Some cameras have battery backup long enough for a camera to power down properly, and some have one that last a couple minutes. This one has an internal battery of 5-10 minutes if you want to view footage or change settings while the vehicle is off. It’s pre-programmed, however, to power down naturally 5 seconds after you’ve shut your vehicle off, so you’ll have to turn it back on manually.

One feature that is missing for the more modern traveler is that viewing footage is restricted to the camera itself, or anywhere you choose to plug your MicroSD card into. Many cameras (including some from Rexing themselves) have started to utilize mobile apps and remote viewing / option setting through the camera itself. I personally really like these features, but they wouldn’t be a make or break feature for me.

This is actually one of the more cost effective front and rear camera systems in my opinion, and it comes with the largest screen I’ve ever seen. If you can get past the minor inconveniences I’ve outlined above, it’s actually a pretty good option for both beginner and advanced users. As with all cameras, it all comes down to personal preference. I personally like a standalone unit that sits on my windshield (similar to a GPS device) but I’ve spoken to a few people that like having that entire view unobstructed, and would really like this as a more suitable option. If you want to look at some other Rexing camera options, here are some others available right now.

The Rexing V1 Dashcam is a tinier, much more subtle dashcam that will probably sit on the inside of a vehicle next to the rear view mirror. This camera is for the front only and it records in full 1080p HD with a 170 degree wide field of view. It also has an advanced Sony STARVIS sensor for extremely detailed night vision recording. It captures footage on continuous recording loops and is made to be a more petite and discreet option as opposed to the larger and flashier M1.

One of the greatest conveniences of this camera, however, is that you can download the Rexing Connect app and review all of your footage from your phone through its onboard Wi-Fi system.

The Rexing V1P Front and Rear Dashcam looks very similar to the V1, but also includes an HD rear camera to record in simultaneous dual channel. It has basically all of the same recording features, and also supports the Rexing Connect app.

The Rexing V3 Dashcam allows dual channel recording, but not in the true front/rear sense. Rexing V3 instead features a front facing camera as well as in-cabin recording (so it records inside the vehicle as opposed to a second stand-alone outside the car.) This camera has a couple different features that none of the other 3 Rexing cams have. There is IR-based night vision available on the in-cabin camera and then there is an ADAS (Advanced Driver Assist System) onboard as well. ADAS is a warning system that beeps to tell you if you are veering toward danger or if somebody might be making a dangerous lane change around you. With the recent addition of Lyft and Uber to my hometown, my initial thought was that this is the perfect camera option for drivers, since you can capture what’s going on inside your cabin as well as outside the vehicle.

The Rexing M1 Dash Camera and all of the others you saw previewed are now available online at BestBuy.ca 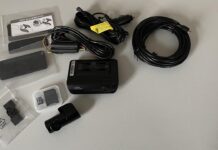