There are very few brands that I’m loyal to like I am with Dyson. I got my first Dyson vacuum around 6 or 7 years ago and haven’t looked back. The upright canister vac that we have is starting to show its age, but our DC 34 Animal Hand Vac is still going strong. That’s why when I was offered the opportunity to review the Dyson Motorhead V7, I jumped all over it.

The Motorhead V7 is an interesting take on the conventional vacuum. It looks a lot like a hand vac, but comes with all of the bells and whistles to make it your sole household vac, or so it seems. A vacuum is really only as good as how powerful it is and on the surface, you’d think something the size of a hand vac probably don’t have the suction capabilities you need to clean a full house.

Dyson vacs tend to be a bit different though as they’ve proven to be capable of performing well no matter the size and the Motorhead should hopefully buck that trend too. A look at the Dyson Motorhead V7

When I hear the name “Motorhead,” I’m reminded of the gravel voiced Lemmy Kilmeister shouting “Ace of Spades” at me. But rather than black leather, this Motorhead is decked out in grey and pink.

When you pull it out of the box, it has the canister and the baseline look of a Dyson hand vac. However, it comes with the extensions and hookups to give it the feel of a regular household vac. Inside the box, you get the unit, power cords, a docking base and some of the regular tools you get with a hand vac – A combo tool that acts as suction and an agitator and the thin crevice suction. The main attachment, however, is the deep cleaning head that glides across your carpet with ease. There aren’t many settings on this vacuum. You have your standard power function and a max deep clean/cleanse setting. Power is activated on/off automatically by a little trigger button on the handle.

Consistent with other Dyson products, the vacuum is bagless and has a canister with a single dust/dirt release function. It also has the standard Dyson dust filter which is recommended that you clean and wash once a month to maintain performance. The canister release/compartment isn’t something I’m used to though. Typical Dyson vacs I’m used to have a really simple release push-button release latch that springs the bottom free. The Motorhead V7 has a somewhat funky system where you pull the release and the entire top of the vacuum unit up. It then opens the bottom release automatically. This is actually a really intuitive system that gives easier access to cleaning pet hair or anything that’s caught in the motor area. Leave the cord behind

A great feature about the Dyson Motorhead V7 is that it’s cord free and works off a rechargeable battery. One of the most annoying things that I’ve endured through years of vacuuming is the annoyance of cords. Whether stepping over them, tripping over them or getting them chewed by the vacuum itself, cordless vacuuming is a blessing in disguise. You may be worried, however, about the battery life itself and it’s a fair point. Dyson’s cordless vacs typically don’t have long lasting batteries. This one isn’t too bad though.

One gripe with my DC 34 Animal Vac is the battery life. I have to leave it on to charge for a few hours and even then, I’ve always gotten around 15 minutes of use before it’s dead. With a fluffy white cat in the house, that means that I don’t even have enough time to do the stairs while trying to get all of Desmond’s hair off the landings. The Dyson Motorhead V7 comes equipped with a 30 minute fade-free battery life or a 6 minute deep cleanse lifespan. 30 minutes should give you plenty of time to get a fair bit in your home done or if you live in a space like a 1 bedroom condo, time to get most, if not all of the vacuuming done.

Quieter than the average vac

Older generation Dyson vacuums can be a bit noisy. Dyson claims that the Motorhead V7 is quieter than the previous versions and its other handheld vacs. I put it to the test. In the video, you’ll see me test this with a decibel measuring app. As a reference point, my DC34 clocks in at about 85 decibels. On the regular setting, the Motorhead V7 is about 80db and on its max setting is around 83-84. The noise the Motorhead V7 makes is a little bit more pleasing on the ears as well. It’s not quite as jarring or obnoxious as my DC34.

How the Dyson Motorhead V7 performs

Whenever I find out that I’m going to be reviewing a vacuum, I stop vacuuming some of the more high traffic areas of my home. I’m not too concerned about the performance in places like the upstairs bedrooms. I’m really looking at how a vacuum performs in some of the common areas or on the stairs. Usually I’ll throw down coffee grounds or get weird like they do in vacuum commercials. This time around, since I knew I was getting the vacuum a month in advance, I just stopped vacuuming around our common areas to put this to the test. In the video, you’ll see me vacuum up our landing area where our cat often sleeps and rolls around, so there was plenty of junk to clean up.

The Dyson Motorhead V7 performs about as well as you can expect. It quickly traps dust, dirt and even pet hair. I was surprised at how well it was picking up the cat’s hair (he’s a purebred Ragdoll, so he sheds like crazy.) With the deep cleanse head, it’s also better at picking up awkward size paper and debris. With a 3 year old that likes to cut paper and do crafts, it’s a welcome addition to picking up weird size paper scraps and things off the ground. While those of you with lots of pets (or a shaggy pet) should spend up and buy the Animal vacs, the Motorhead V7 is still great for a single pet household or for one that tracks more dust and dirt than it does shed. The Motorhead was great getting crumbs out of the corners of the couches and even dirt off the weird little crevices on my stairs. When you’ve gotten used to a 15 minute battery life off your existing handheld, you’re always worried in the back of your mind as to when it’s going to fizzle out and need a charge. The 30 minute battery life of the Dyson Motorhead V7 was appreciated and never made me feel like I was rushed. In those tougher to clean areas, the max deep clean setting was a fantastic add as well.

Does this replace your everyday vacuum? I’ve spoken a couple times during this review about how the Dyson Motorhead V7 can seamlessly switch from a hand vac to a regular vacuum with just a change in attachments, but can this vac replace the normal canister vac in your closet?

I’ll leave this at a solid maybe. The Dyson Motorhead V7 can probably replace your canister vacuum if you live in a smaller space (A modern Vancouver-sized condo that’s about 600 sq. ft.) With a 30 minute battery life and powerful suction, it’s a great option for those of you with very little extra closet space.

For those in mid-size to larger spaces, I wouldn’t let your vacuum quit its day job just yet. The convenience of a wireless vacuum is great, but it probably takes you longer than 30 minutes to vacuum your house. Dyson vacs don’t exactly have lightning fast charge times and unless you want to commit to 2 or 3 vacuuming sessions over the weekend, keep your corded vac and use this for the blinds, nooks and crannies and even the stairs. It’s light weight and firm attachment wands mean that there’s no screwing around trying to wave a vacuum hose into a dusty space and the sensibly sized canister means you can trap quite a bit before you need to empty out.

Whether for floors, counters, couches or carpets, the Dyson Motorhead V7 is versatile enough to tackle all areas of your house. It’s easy to clean and it’s easy to operate. It’s available now at Best Buy. 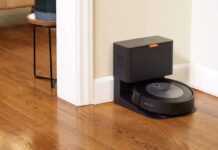 Gift your family a new premium vacuum this holiday season 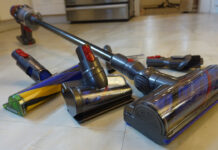 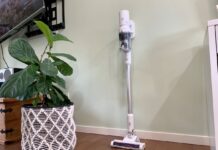