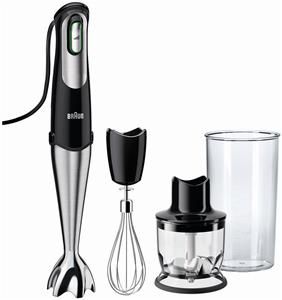 If you’re like me you have small appliances you love that fall into the ‘use every day’ or the ‘once in awhile’ categories. My Belgian waffle maker is one of those that I don’t use every day, but it’s not something I’d like to be without. The same goes for my Panini grill, my slow cooker, and my KitchenAid stand mixer: all aren’t every day items, but I use them so much they’re pretty important in my kitchen.

My every day items include the toaster oven, microwave, and Keurig coffee maker. After trying out the Braun Multiquick 7 immersion blender, I’m surprised that I really want to add an immersion blender to that list. Why? Until I tried out this specific type of hand blender, I had no idea there were so many uses for one. It’s definitely not just for whipping cream or making smoothies.

Here’s a look at the Braun Multiquick 7 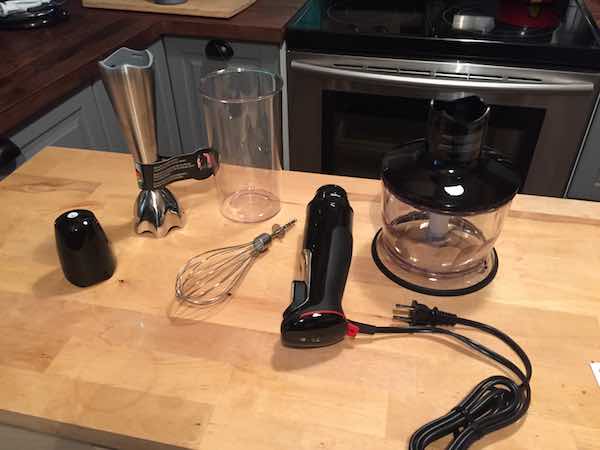 When you unbox the Braun Multiquick 7 you get the hand blender, a whisk attachment, a BPA-free plastic beaker for smoothies or whip cream, and a chopper bowl that works as a small food processor.

The hand blender is made from heavy duty plastic, but it’s very lightweight. The blades are stainless steel.

All of the attachments use an EasyClick system. That means you can remove them and reattach them with a single click. I found it really easy to switch between attachments and set up the Braun immersion blender.

The Braun Multiquick 7 isn’t a one trick pony. This hand blender is designed for ease of use and multiple kitchen tasks. 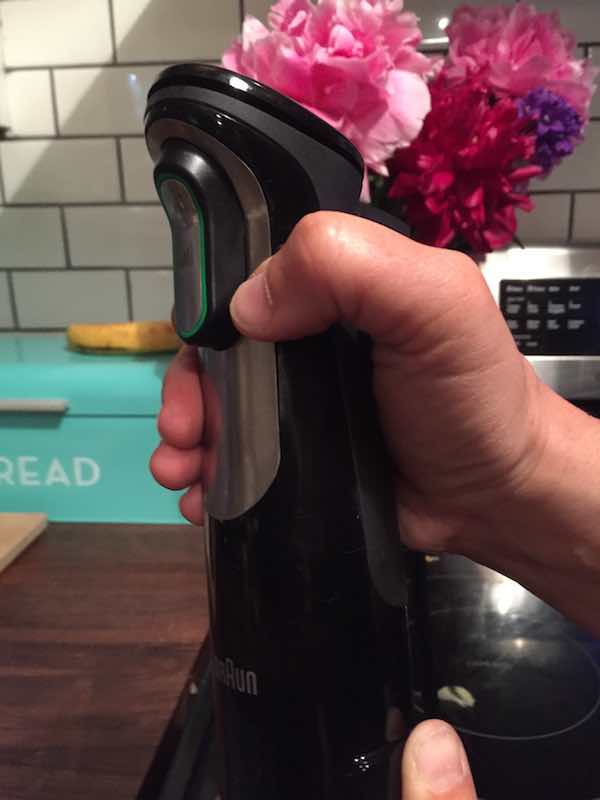 When I’ve previously used immersion blenders I’ve made smoothies. Occasionally I’d use one to whip cream, but I’ve always found that the shape of blender isn’t as conducive to whipping cream as my stand mixer. The stand mixer has a whisk attachment, and when you’re making homemade whip cream, a whisk just works better.

That’s why the whisk attachment on the Braun Multiquick 7 is what I wanted to try first, and I can’t say I’ve ever actually seen a whisk attachment on one of these blenders before. I poured some whip cream in the included beaker, added a little bit of icing sugar, and I was off.

Well I call it a throttle, but it’s actually Braun’s Smart Speed technology. It lets you squeeze to adjust the speed of the blender without having to pause what you’re doing. This one feature makes this blender an absolute joy to use. I would speed up and slow down depending on the consistency of the whip cream, and it’s very responsive so there’s no delay when you squeeze it.

My whip cream turned out great, and the only time I had splatter was when I raised the whisk out of the beaker.

My next test was to use the chopping container. I was making crepes for dinner so I wanted to quickly chop up some strawberries for topping. All I had to do was throw a few strawberries inside, attach the Braun Multiquick, and hit the throttle. Because you can control how you use the speed so easily, I just pulsed it a few times and it was ready.

I also chopped up some carrots inside the chopper and it mulched them up in a hurry. I was actually surprised at how fine the carrots were ground after the Multiquick had run at full speed for a minute. It would be amazing for making baby food or cutting up ingredients for soup.

I tried the blender attachment to make a few smoothies in the beaker and it works really well. I had a little splatter when I raised the blender out of the beaker but the bell-like shape of the blender keeps everything in the container fairly well.

You can even make dough in the chopper container. I didn’t try it but while I was doing research on the Braun Multiquick 7 I watched a few others make it and I was impressed. I can’t imagine an easier way to whip up pizza dough. 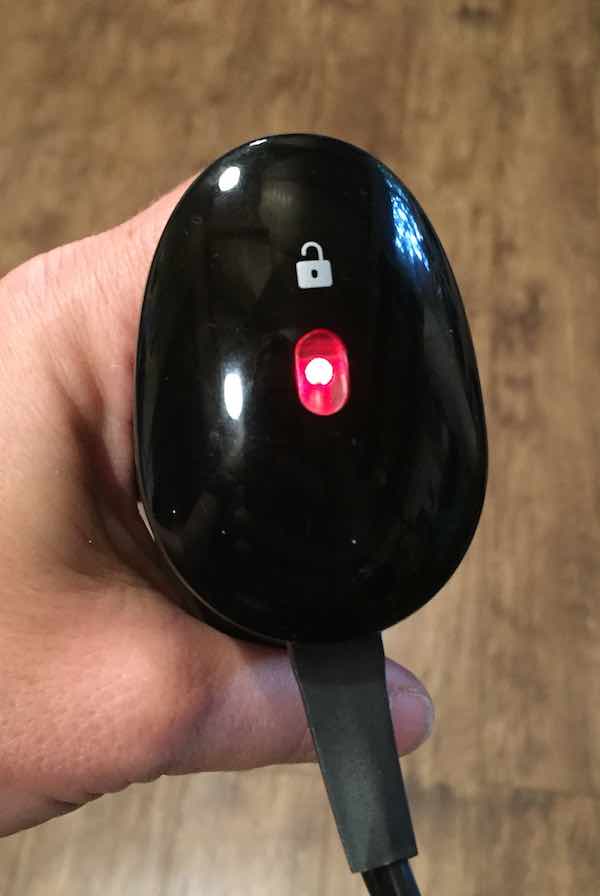 Everything except for the chopper lid and handheld motor part of the Braun Multiquick 7 are dishwasher safe. The motor part just wipes clean with a damp cloth.

The Braun Multiquick 7 is a lot of fun to use, and because it has so many functions, this is one appliance you would definitely keep handy to grab every day.

I enjoyed using it for whip cream, smoothies, and for a speedy puree, and now I’m sold on having a mini-whisk around is a must-have in the kitchen. When you don’t want to bring out the stand mixer or have a lot of extra clean up, that whisk is a life saver.

The handle on the Braun Multiquick 7 is non-slip, and this is definitely a plus. I’ve used an immersion blender in a steaming pot of broccoli and cheddar soup once and because I had wet hands from rinsing something, it slipped and fell straight into the soup. I wet my hands and tried that with the Multiquick and I didn’t feel like that was going to happen.

But by far, my favourite feature on the Multiquick is the child safety lock. Right as I was testing it I turned my back and my six year old picked it up and aimed it at his brother. These things tend to happen with three boys in the house, and although I’m sure it wouldn’t have moved past the ‘I’m going to get you stage,’ it’s nice that Braun has added this feature so one child cannot try to puree another.

You can check out the Braun Multiquick 7 on Bestbuy.ca right now. I highly recommend this handy little immersion blender for any at-home chef.