The KitchenAid cordless immersion blender is a cordless, variable speed immersion blender that runs on a lithium-ion battery. All it takes is 2 hours to charge it from empty, and once charged it will blend through a few pots of soup, milkshakes, or whip cream before you need to recharge.

Appearance and features of the KitchenAid cordless immersion blender

I love using cordless small appliances, and the KitchenAid cordless immersion blender is such a great appliance to have around. If you’ve always used a corded immersion blender like I have, it takes you a few minutes to realize you can move around without being tied down. Once you realize how much freedom you have, you’ll be blending everywhere.

The first time I turned on the KitchenAid cordless immersion blender I was surprised at how powerful it was. There are two buttons you need to press to turn it on, one on the front and one on the back. It fits nicely in your hand and it’s easy to move around in a pot, bowl, or the cup. The two buttons are a nice safety feature as it won’t turn on unless you press both.

To control the speed on this blender you just adjust the pressure on the power button. A light, steady press on the button is a lower setting for pre-mixing, and you can gradually increase the pressure as you need it. It’s such an easy way to control an immersion blender, and you never need to stop blending if you want to slow down or speed up.

Always on when you need it

The KitchenAid cordless immersion blender charges from empty in 2 hours, and once it’s charged it will hold that charge. That means you can leave it in your drawer and pull it out whenever you need to blend something.

There is a light that indicates whether the battery is running low. If it’s green you are good to go, if it is red it’s time to charge. I used the blender when it was red for whip cream, and it kept going, slowly losing power, for 4 minutes. That’s pretty impressive. I was still able to finish the whipped cream before I plugged it in for a recharge.

If your battery dies on you when you are mid-task, all you have to do is plug it in for 10 minutes. That 10-minute charge should give you enough power to finish whatever you’re blending.

Blend everything with the KitchenAid cordless immersion blender

I used the blender to blend a pot of cheese and broccoli soup and it was pretty chunky. I mixed for at least 10 minutes off and on, going back in to grab random pieces of broccoli I missed. The next day I used it to mix a milkshake in the cup for my son, adding frozen blackberries, milk, and ice cream. The 4-point blades had no problem whipping through frozen fruit.

The day after that the battery was still green, and I whipped cream with it in the blender cup. It took 4 minutes off and on, and that’s when the battery light turned red. I could still blend though, and I finished what I was doing before I plugged it in.

The included cup holds 3 cups of whatever you are blending. I find the cup is best used for things like whip cream or milkshakes, but you can use it to chop up tomatoes, blend a smoothie, or puree soft vegetables.

The cup includes a lid so you can just pop the lid on the cup and put it in the fridge.

Everything except the blender body is dishwasher safe. I put the blending arm and the Pan Guard on the top rack of my dishwasher just in case, but they are very sturdy so I can’t imagine any spot on the dishwasher would harm them. The cup and lid are dishwasher safe too.

Should you choose the KitchenAid cordless immersion blender?

I’ve always used KitchenAid appliances and I love them, and the only reason I would upgrade from my current KitchenAid immersion blender is because I know now how great it is to be cordless.

I can use the KitchenAid cordless immersion blender on my kitchen island where I don’t have power, and it really gives you the versatility to dig into the sides of the pot if you’re blending over your stove. The charge lasts quite a while, and it’s easy to plug it in overnight and have it ready for the next day. I love the variable speeds, because you can control splatter on a low speed and kick it up a notch for things like broccoli or soft, cooked vegetables. 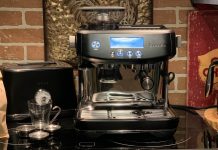 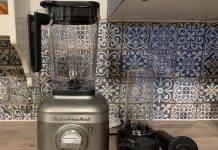