If you have a griddle you love and you wonder why you’d ever trade it in, you have to take a look at the Cuisinart Griddler Deluxe. This griddle doesn’t just make pancakes; it makes pancakes and bacon at the same time, sears steak, fries up a great burger, and makes the perfect panini. I tested out the Cuisinart Griddler Deluxe for two weeks, using it almost every day, and there’s nothing this griddle can’t handle. It also has a few convenient features that make it a go-to small appliance you will use every day.

The Cuisinart Griddler Deluxe is a foldable grill. It has a 240-inch non-stick cooking surface and it weighs 7.48 kg.

I’ve had the same griddle for at least 10 years, but I never thought much about upgrading it until I tried the Cuisinart Griddler Deluxe. I had no idea a griddle could have so many different functions, and I made use of them every day I was testing it.

If you have a standard griddle the way I do, with a long flat surface, you wipe it clean before you put it away. If it becomes really dirty you will have to scrub at it to get it clean, and over the years it’s become more difficult to get it really clean as food accumulates in the gaps between the grill and the casing.

With the Cuisinart Griddler Deluxe, the grill plates are removable. You just press on the sides to pop them off. Even better? They are dishwasher safe so you don’t have to scrub at them.

Removing the plates means you can switch up how you cook. Instead of cooking bacon and eggs or pancakes on your griddle and having the bacon grease drip into your eggs, everything can be kept separate. You can have pancakes on one side, bacon and eggs on the other.

Different temperatures for both sides of the grill

You can adjust the heat on both sides of the grill, and this is a fantastic option if you’re cooking a family-sized brunch. Normally we cook pancakes on our griddle and bacon in a pan or in the oven. I could easily fit six medium-pancakes on one side of the Cuisinart Griddler Deluxe and 5 pieces of bacon on the other, and having them all cook together at the same time on the same grill meant that a full breakfast was served all at once instead of in stages. I love the adjustable temperature for both sides, because I tend to cook bacon at a higher heat than pancakes.

We cooked bacon at 375 to 400 and it came out perfect. We did try the sear function on the bacon because my son loves crispy bacon. He liked how it turned out, but you really have to watch over it while searing. SearBlast will turn up the temp to 500 for about 2 minutes, so if you’re not hovering you’ll end up with really crispy bacon.

I also loved how the surface of the Cuisinart Griddler Deluxe was very flat and level when it was extended into a full griddle. That meant the eggs I cooked didn’t leave a long trail of egg white the way my grill does when I cracked them right on the surface.

The Cuisinart Griddler Deluxe is not just for breakfast

If you only used the Cuisinart Griddler Deluxe for breakfast, you’d be missing out on some amazing lunches and dinners. It can sear steak to perfection, leaving those great grill lines on the meat, and it works just as well with chicken breast. I experimented with the flat grill surface and the griddle, turning SearBlast off and on depending on how far into the cooking process I was. I found I liked how the griddle would cook chicken, but the steak was pretty great on the flat surface too.

I think comes down to a matter of preference, but after using the Cuisinart Griddler Deluxe I feel like I’m a flat surface girl for burgers and a griddle for steak and chicken.

The Cuisinart Griddler Deluxe makes Paninis so well my entire family is asking me to upgrade to this grill. I could make four small Panini or two large and one small Panini at the same time, so there was no waiting for grilled cheese. We got creative with our sandwiches too, so it was a fun family dinner.

You can adjust the top grill so it closes right down on your sandwich or micro-adjust it so you only get a light press. We propped it at up at the top spot for a top-melt sandwich and it was so good, with the bottom bread lightly toasted and top cheese melted.

Once you start making Panini with the Cuisinart Griddler Deluxe, you won’t want to stop. There are so many combinations, and because the grill is so large you can make a weeknight dinner in no time at all.

The sky’s the limit with the Cuisinart Griddler Deluxe

After so long with my long, flat griddle, the Cuisinart Griddler Deluxe has made me realize it’s way past time for an upgrade. I love the dual temperature options, the removable and reversible grill plates, and the adjustable Panini press options. I can’t believe I can say I love a grease trap, but it’s so nice to be able to pull off the trap and clean the grease out.

This griddle folds up for easy storage, heats up in a hurry, and is so versatile. My husband loved making weekend pancakes, eggs, and bacon on it, and the entire family has really enjoyed the Panini press. 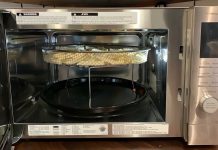 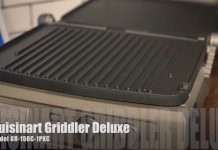 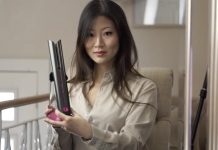 Enter for a chance to win a Dyson Corrale Cordless Straightener