My household has been a big fan of Dyson vacuum cleaners for going on two decades. We have kids, we’ve always had large, furry dogs and for most of that time we’ve had cats as well. Many vacuum cleaners failed before we tried Dyson. We started with a long ago discontinued purple Animal upright and never looked back. A few years ago, we decided to adopt Dyson’s stick vacuums, which have a lot of appeal in a split-level house with four floors. The Dyson V8 Absolute was upgraded to a V10 Absolute (which Shelly Wutke reviewed last summer), and now I’ve been testing out the all-new Dyson V11 Absolute.

The advantages of Dyson stick vacuums Before I get into detail on the latest and greatest model, it’s probably worth touching on the high level advantages of Dyson’s stick vacuum cleaners. The big win of course is the lack of a cord. That’s what won me over—no more having to search for an outlet on every floor when vacuuming. They are also extremely light for one-handed operation and easy carrying, and they convert between stick and hand-held vacuum mode.  That makes them great not just for the house, but also for cleaning your car.

Advantages specific to Dyson stick vacuums have always included high power, long battery life and lots of accessories. Their batteries are replaceable as well. I have to admit, these colourful stick vacuums look kind of cool, too …

The V11 continues to evolve the design, keeping the same basic form factor and battery life, but offering a considerable boost in power (185 AW of suction compared to 150 AW for the V10). There are also a few more big changes, but I’ll get to those in a moment.

Inside the V11 Absolute box In its Absolute package, the Dyson V11 is in an attractive Nickel/Blue colour scheme. Inside the box are two cleaner heads—a high torque brush head for multi-surface cleaning, and a soft roller that’s great for hardwood floors—along with a mini motorized head and four dusting and crevice tools. It’s a pretty solid assortment that should handle any household cleaning needs.

Naturally there’s a power adapter and Dyson includes the hardware to wall mount the vacuum. I did that with our V8 and V10 and I recommend it as it keeps the vacuum handy, yet safely out-of-the-way.

Upgrades over the V10

The Dyson V10 and V11 look almost like twins (aside for the different paint jobs), but there are some big improvements in Dyson’s latest stick vacuum.

With the V10 series released only last year and the V11 looking very similar visually, what are the actual differences in this latest model? Both vacuums are powered by a Dyson digital motor, but redesigned fan blades in the V11 version spin at up to 125,000 RPM, developing 185 Air Watts of suction, which is a 20% improvement over the V10.

The V11 also incorporates an integrated dynamic load sensor. This sensor is checked 360 times per second and measures resistance on the torque brush head’s brush bar, then automatically adjusts suction power based on that reading. I noticed it immediately when moving between carpet and a wood floor, with the motor revving up when it hit the carpet. You can still adjust modes manually, but in automatic mode the vacuum does a pretty good job of picking the appropriate power level itself. Previous Dyson stick vacuums including the V10 had a switch on the canister that let you toggle between modes so you could kick up the power for tough jobs. That switch is gone on the V11. But don’t worry, there’s something better in its place. On the end of the head unit, there is now a LCD display with a single button. When you use the vacuum, that display is right where you can see it. And this is where you can cycle between modes: Eco, Auto and Boost. With each mode, you can also see the effect of battery life, with the actual time remaining displayed—not a percentage or collection of bars, a countdown in minutes and seconds.

Actual battery life is rated at up to 60 minutes, the same as the V10, but the time remaining display is a great help in actively managing that battery. It also reverses and shows the time remaining until a full charge when plugged into power.

Finally, the display also warns you when it’s time to recharge and Dyson says it will display a message showing the location of a blockage—however, I never ran into a blockage situation to test that out.

Hands on with the Dyson V11 Absolute All of this is great stuff, but how does the Dyson V11 Absolute perform?

I’m happy to report that the V11 Absolute is simply a fantastic vacuum cleaner. It chews through the dog fur that drifts around our house like tumbleweeds during shedding season, without jamming up the power head. Dirt, sand and leaves near the doors were sucked up without a problem. I could definitely feel the suction improvement over the V10, especially in Boost mode—which really should be renamed to Beast mode.

A reasonably thorough vacuuming of the house from top to bottom takes around 30 minutes, and that typically leaves 30 minutes of battery power remaining. Running out of battery isn’t a huge concern under normal circumstances, but having that display showing the actual time remaining (which appears to be accurate, by the way), is definitely reassuring. The dirt bin appears to be the same size as that in the V10, so I am usually able to make a pass of the house before having to empty it. When the dogs are really shedding though, it can mean two or three trips to the garbage.

The best stick vacuum yet

I said this with the V8 and then with the V10, but the Dyson V11 is the best stick vacuum yet. We’ve still kept one old school Dyson upright vacuum for big jobs where repeatedly emptying a cup would be annoying (cleaning behind the fridge and appliances, for example), but it gets used maybe once or twice a year. Dyson stick vacuums are at the point where the company has nailed the form factor and they’re powerful enough to replace a plug-in vacuum. If you’re considering making the switch, you won’t regret choosing the V11.

If you need any more convincing, the V11 Absolute is covered by a 2-year warranty.

Check out the Dyson lineup as well as cordless, traditional and robotic vacuum cleaners from all the top-rated brands and manufacturers at Best Buy. 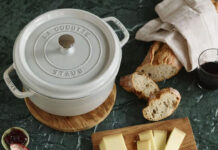 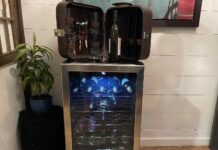