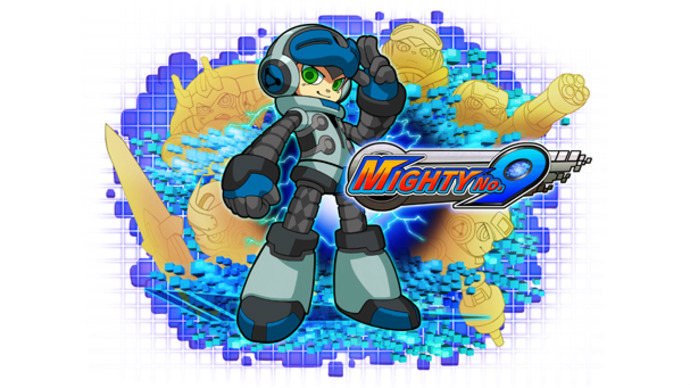 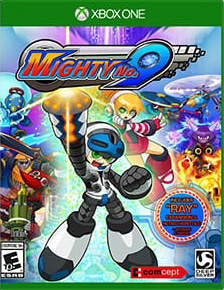 Classic 2D side scrolling action returns
When Keiji Inafune, lead illustrator and character designer of the Mega Man series during the NES and Super NES era, announced Mighty No. 9, I could hardly believe my eyes and ears. After leaving Capcom several years ago to start his own company, I was ecstatic to learn that one of his first projects would essentially be the spiritual successor to the Mega Man games that I so dearly love.

Funded by Kickstarter, Mighty No. 9 builds upon the best elements from the 8 and 16-bit classic 2D Side-scrolling Action games, and infuses fresh mechanics, modern tech, and fan input to build a game that is familiar, yet unique. Join Beck, a colourfully designed robot boy, as he must discover who is behind a dastardly evil computer virus that is causing robots to go haywire and threaten the fate of the planet.

Mighty No. 9 takes place in the future, where advances in robotic technology have confined violence to the Battle Coliseum. In this age of prosperity and peace, the Battle Coliseum is home to magnificent duels between robot combatants. However, one day during a competition there was a cyber-attack, which infected these robotic combatants with a computer virus causing them to become crazed and rampant.

Quickly spreading to robots throughout the United States, the world’s largest manufacture of robotic equipment blames a jailed scientist named Dr. Blackwell for the uprising. Puzzled by this accusation, two upstart professors named Dr. White and Dr. Sanda assemble a crew to investigate who is really behind this cyber-attack. You play as Beck, the 9th in line of powerful robots, and the only robot not to be infected by the mysterious computer virus.

To be frank, Mighty No. 9 is not going to win any awards for its story line, and I am ok with that. You see, the story in Mighty No. 9 is meant to give you a brief backdrop as to why the world is in chaos, and a reason why you must complete certain tasks—similar to that of the Super Mario Bros franchise. Mighty No. 9 focuses on gameplay, and gives you a supplemental storyline that is only there as a means to complete the overall experience. 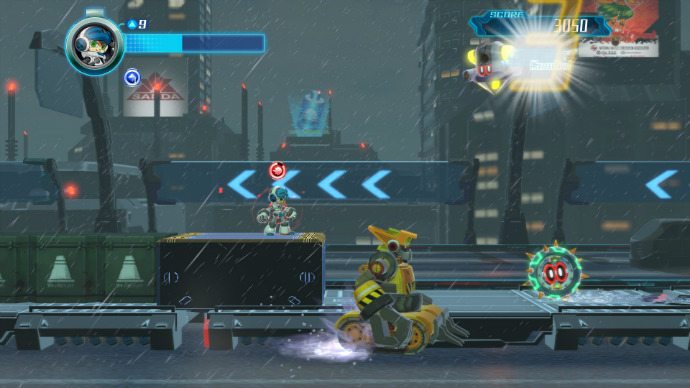 As Beck, you will run, jump, blast, and transform your way throughout 12 challenging action-platforming stages and boss battles. After completing Mighty No. 9’s tutorial, that got me quickly assimilated with its control scheme and combo system that allows for faster sprinting and better weapon damage, I was instantly thrown into battle. After just a few minutes of gameplay, it was easy to see the heavy influence and challenge of games from the 80’s that Mighty No. 9 posses.

You see, Mighty No. 9 will make you want to pull your hair out in frustration when enemies get cheap attacks on you, and have you smiling at the same time after you have defeated these same pesky foes—it is a love hate relationship. A tip for those just starting out, go to the options settings and increase the amount of lives you get per game to nine—you’ll thank me later for this. I’m really keen on the way in which Mighty No. 9’s levels were designed; they were created in such a manner that they flow really well and offered a decent challenge. Most of the time, I found that after a handful of playthroughs, I was able to make it to the stage boss with relative ease.

I liked the freedom that Mighty No. 9 gave me in choosing any order I wanted to battle the games eight bosses. Each boss in Mighty No. 9 has a specialized ability, ranging from electronic warfare to fire generation to espionage tactics, just to name a few. After defeating a boss, you gain their special ability, and I soon quickly learned that each boss has their own weakness to a specific ability.

It is Mighty No. 9’s rampaging crazy robot bosses that will at times drive you bonkers. If you go in guns blazing thinking you will take down the boss with a few shots, then you are in for a big surprise. You will need to be on the lookout for any patterns these formidable foes have while taking them on, and this means playing the bosses repeatedly until you figure out their pattern. Once you learn these patterns, with some near perfectly timed attacks and dodges you’ll be able to defeat them. 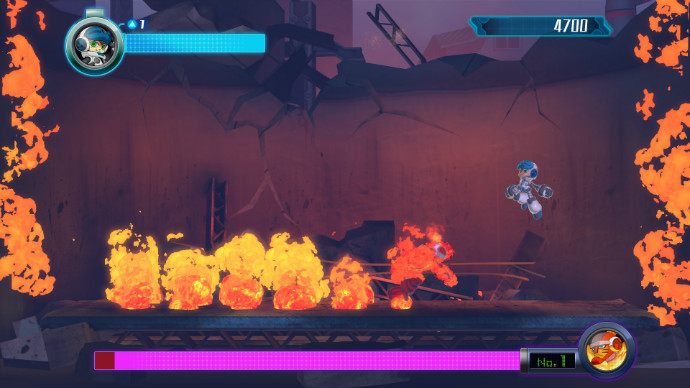 Graphics powered by the Unreal Engine with a retro soundtrack

Mighty No. 9 uses the Unreal Engine from Epic to power its visuals, which has also been used in AAA games such as Gears of War, Bioshock, and Mass Effect. Although Mighty No. 9’s graphics are not in the same caliber of the afore mentioned AAA games, for a game that was a Kickstarter-funded project and developed by a small team, it has its own particular charm and style that I grew fond of.

Though, visually Mighty No. 9 has changed its appearance from its initial showing, most likely due to the fact that it was developed for a wide variety of consoles, it runs at 1080p and 60fps on both the Xbox One and PlayStation 4. I found it puzzling that even on the Xbox One and PlayStation 4 that Mighty No. 9 suffered from occasional frame-rate issues and screen tearing. To be honest, after three years in development I expected a little more from Keiji Inafune and his team in this department.

All the characters in Mighty No. 9 have voice acting, and for the most part, it adds more depth to the characters and world around you. Mighty No. 9 features music from a myriad of Japanese veteran game composers that complements the on screen action nicely. I was surprised to discover In the settings, an option to change the music to a more 8-bit retro-inspired style. I totally loved this, and it brought back found memories of gaming on the NES. 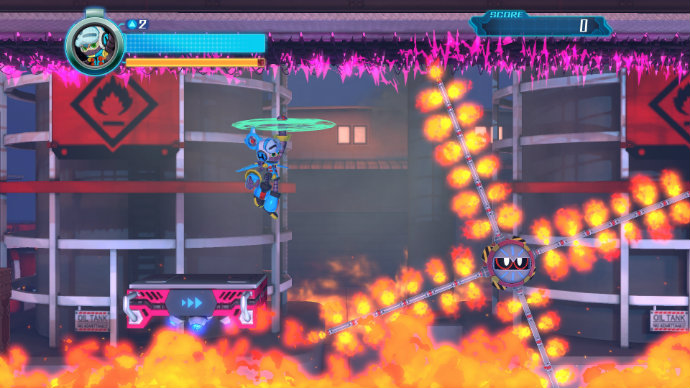 Multiplayer mechanical mayhem
Mighty No. 9 features two multiplayer online modes for you to compete in. One of the multiplayer online modes is a two-player online co-op challenge mode. This mode contains over a dozen different missions, such as making it to the goal in time, which you can play with an online friend. One player will play as Beck, and the second player will play as Call, Mighty No. 9’s robotic heroine. Although the idea behind this mode is good, I found that most of the time my online “teammate” would keep moving forward and ultimately cause me to go off the screen. Conversely, playing with a friend that works together as a team made the experience considerably more enjoyable.

The second multiplayer online mode allows you and a friend to compete online via an online race battle. The premise is simple, make it through the level as fast as you can and get bonus points for killing enemies on your way. In this mode, you don’t share your screen as you do in the challenge mode, which made this my preferred online mode in Mighty No. 9. Although the difficulty in these multiplayer modes is nowhere near that of the single player story mode, it was a nice change of pace.

If you were looking to buy Mighty No. 9 just for online play, I can’t really recommend it. On the other hand, if you have finished the single-player story mode, it is definitely worth your time to try the online components. 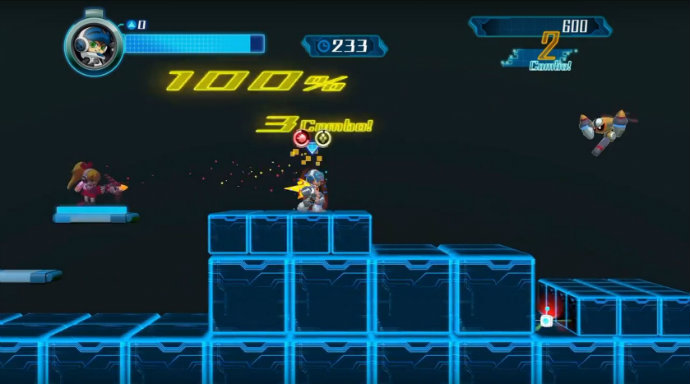 Loads of game modes and a free expansion pack

In addition to the story mode and online multiplayer modes, Mighty No. 9 contains a single player challenge mode, boss rush mode, additional unlockable difficulty modes, and online leaderboards. My favourite out of all these modes is by far the boss rush mode. You must defeat the game’s bosses, back-to-back, as fast as you can. Although frustrating at times, I found that I kept coming back for more trying to beat my previous time.

Included with the retail version of Mighty No. 9 is the bonus RAY expansion pack, where you get to play an exclusive story from her perspective. As it turns out, Ray is an unstable prototype robot who needs to constantly feed off other robots in order to survive. This element is incorporated into gameplay by your health constantly ticking down as you’re making your way through stages. While you can eat a robot to regain some of the lost health, if you are hit your maximum health is reduced to whatever your health bar is drained to—making it tough to complete a stage at times.

Although this unique element of Ray sounds good on paper, when it comes to dealing with bosses, you’re stuck fighting in close range and your only opportunity to regain health is the incremental health breakpoints on the bosses. In the end, I enjoyed playing as Ray as she offered a different playstyle compared to Beck, and learning her backstory was more interesting than the game’s single player story mode. 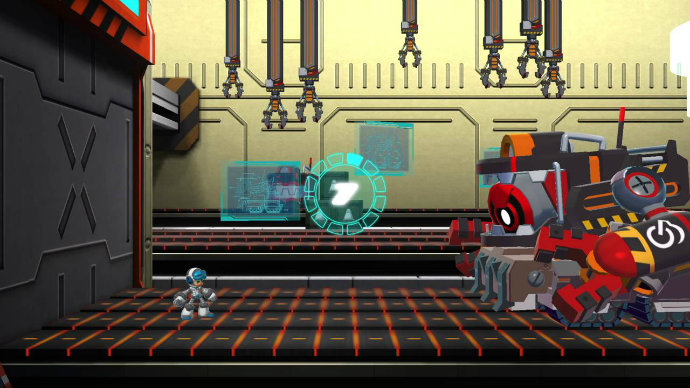 If you love the character design of Beck as much as I do, then you will want to pick up the highly collectible Mighty No. 9 Signature Edition for the Xbox One or PlayStation 4. This special edition not only includes the game, but it also comes with an individually numbered 6.5” figurine of Beck, three interchangeable faceplates, and a foil signature of the game’s creator, Keiji Inafune, on the packaging. Totally awesome! 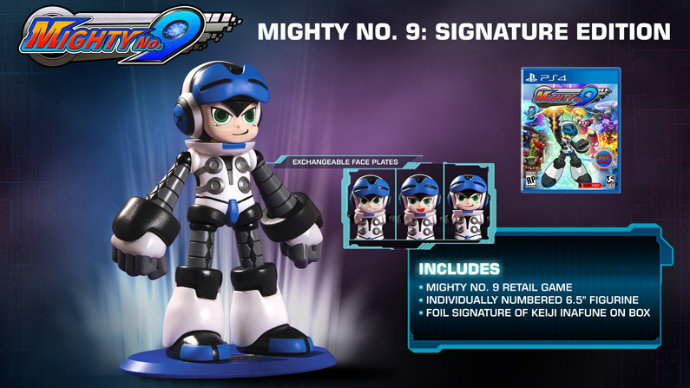 If you are looking for a game that will give you a run for your money, then Mighty No. 9 is right up your alley. I loved the game’s character designs, and the sometimes-frustrating gameplay. Boss battles brought back memories of a time in gaming when carefully learning their pattern and performing precisely timed attacks were king. The included bonus RAY expansion pack adds a unique challenge to gameplay, and I found myself at times enjoying it more than the single player story mode.

Get  Mighty No. 9 for Xbox One

Get  Mighty No. 9 for PlayStation 4

Get Mighty No. 9 Signature Edition for Xbox One

Get Mighty No. 9 Signature Edition for PlayStation 4