The stellar Wii U game comes to Nintendo Switch

In 2014, Nintendo and Koei Tecmo collaborated on Hyrule Warriors, a brilliant Wii U crossover game bringing together The Legend of Zelda and Dynasty Warriors franchises in a highly innovative and thoroughly enjoyable way. The game featured iconic characters and locations from The Legend of Zelda mixed with the frenetic, over-the-top combat found in Dynasty Warriors. I was extremely impressed with how perfectly these two game worlds gelled, resulting in one of the best games to ever appear on Wii U.

Given the runaway success of Nintendo Switch, the game has once again returned with Hyrule Warriors Definitive Edition. This expanded version features all DLC, including 29 playable characters, an expanded story, the My Fairy mode, and plenty of gameplay enhancements. Hyrule is under siege 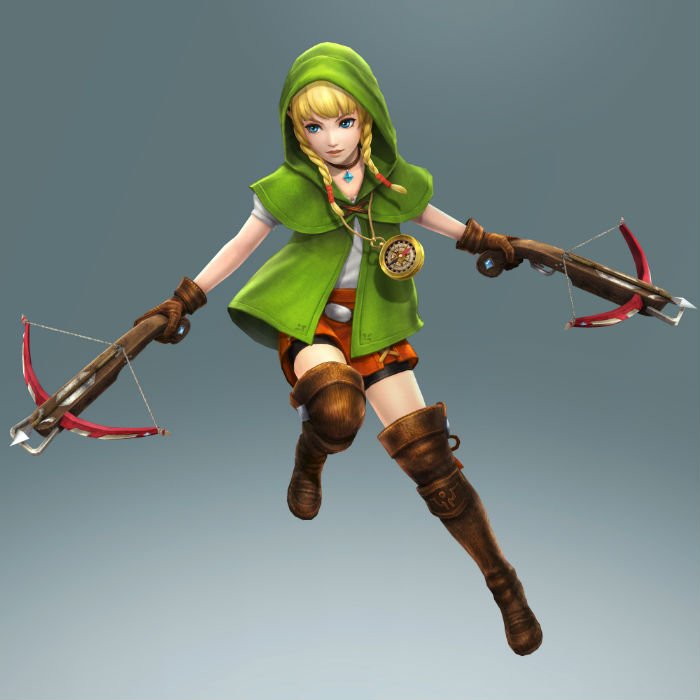 e stellar story-centric Legend Mode from the Wii U version. It also features DLC including Cia’s Tale, all-new mini campaigns for Linkle, and characters from The Legend of Zelda: The Wind Waker making their Hyrule Warriors debut.

The tale begins in familiar Zelda fashion with the evil Ganondorf up to his wicked ways yet again. This time, he’s concocting devious machinations designed to restore his fragmented soul that had been splintered and sealed away long ago. He goes about this by corrupting Nia, a sorceress entrusted with protecting the balance of the Triforce. Using her as a conduit to open the Gate of Souls connecting various Hyrule dimensions, he then unleashes the hordes of monsters within to wage his war against Hyrule.

All the beautiful cutscenes from the Wii U original that tell this story remain intact here, complete with the top-notch character voice acting and delightfully voiced narration. It’s a picture-perfect transition to Nintendo Switch with cinematic segments that are among the best I’ve seen on the console yet. The impeccable controls from the Wii U version have been faithfully ported over to Nintendo Switch, robust combo-system and all. As you hack and slash your way through hundreds, and even thousands of minions on the battlefield, your goal is to complete ever-changing objectives until finally facing menacing end bosses taken directly from The Legend of Zelda lore. In addition to the simple-to-learn, yet challenging-to-master combo system requiring you to string together light and strong attacks, you’ll also gain access to a plethora of iconic items straight from The Legend of Zelda including the bomb, bow and arrow, boomerang, and hookshot.

Battles in Hyrule Warriors Definitive Edition are a lot of fun, requiring you to strategically take down tougher commander units while also capturing outposts and strongholds that will spawn minions for whichever team occupies them. Expanding your zone of control is critical to progressing through scenarios, but you also have to maintain a strong defensive since the enemy army can launch surging counteroffensives that can quickly cut deep swaths into your secured territory. These constant back-and-forth tussles add a sense of dynamism to every clash, keeping the action fresh and requiring you to always stay alert and on your toes.

While the base gameplay stays true to the original, new features have been added that make combat faster and more strategic. To begin with, the fast character switching ability from the Nintendo 3DS version returns allowing you to jump between characters at any time. You can also tap on the bottom touch screen map and direct characters you’re not controlling to desired map locations (with the drawback that if they’re defeated, you lose the battle.) Further, early in the game you’ll acquire the Ocarina, and after touching Owl Statues scattered across maps, you can play the instrument to instantly warp between them.

Two player local co-op is also back in this version. You can team up with a partner using two Joy-Con Controllers, or you can use the Nintendo Switch Pro Controller. Co-op is, as you’d expect, much more fun then adventuring solo so it’s the better way to play. An expanded roster with all DLC characters 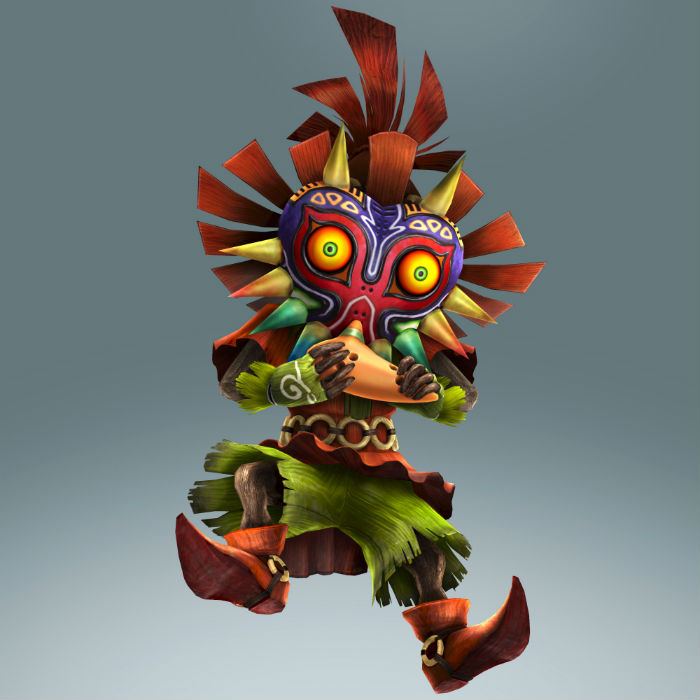 able characters from Hyrule Warriors are back in action, along with the grand arrival of characters from the 3DS version. This includes Toon Link, Tetra, and King Daphnes from The Wind Waker, Skull Kid from Majora’s Mask, and Linkle who’s essentially a female version of Link. These new faces add even more variety to an already robust roster featuring characters across different Hyrule time-space realities, like Sheik from Ocarina of Time, Midna from Twilight Princess, and Ghirahim from Skyward Sword. All playable characters use the same button combos for simplicity, but each one has their own unique and dazzling weapon movesets. This ranges from Darunia’s use a giant hammer to pummel foes to smithereens, to more unorthodox approaches like Agitha’s use of oversized insects to crush groups of enemies.

The standout DLC character by far is Linkle, an adept, agile, dual-crossbow wielder that is one of the most effective fighters on the whole roster. Her story is told as an aside to main quest, and begins with her being a young Cuccos farmer who believes herself to be a reincarnated warrior (same as Link). Her adventure eventually intertwines with Skull Kid, a mysterious and beloved character from The Legend of Zelda series who is finally playable in a game for the first time. The Wind Waker trio of characters also get treated with their own mini adventure, which takes places after the main campaign’s conclusion when Cia opens a new portal to their realm. The best part about these characters is their exquisite presentation, which stays true to their colourful, cartoonish appearance and sprightly nature. On top of the lengthy Legend Mode campaign, Hyrule Warriors Definitive Edition contains a slew of extra modes to further extend the gameplay. First off, there’s Adventure Mode where you can embark on special missions as you progress through a map grid inspired by the original Legend of Zelda overworld. Far more than a simple challenge mode, Adventure Mode lets you earn valuable rewards such as heart containers, powerful weapons, and you can even unlock more playable characters.

Mission types vary wildly, from timed battles, to boss rushes, to maps where you need to use specific characters or weapons. My favourite though are the quiz missions that put you in a series of battle arenas against two enemies, and you’re given a description of one that you must defeat. The hints can be as silly as “defeat the helmet wielder,” requiring you to scope out your two foes (in the middle of battle) and see which one matches the description. Matches like these are silly and chaotic, but at the same time emphasize how adaptable and fun the gameplay is. Free Mode is another area you can check out in Hyrule Warriors Definitive Edition, and here you’re able to replay any completed Legend Mode chapters with any of your unlocked characters. There are 18 main campaign map locations in total, most of them taken directly from past entries in the series, such the Twilight Field (Twilight Princess), Death Mountain (Ocarina of Time), and Skyloft (Skyward Sword). Not only is it a lot of fun to mix and match from your stable of heroes, resulting in weirdly fun fantasy match-ups such as an epic battle between Skull Kid and Princess Zelda, but Free Mode also enables you to level up any heroes you want to prepare for stronger future missions.

Returning is the My Fairy mode from 3DS’ Hyrule Warriors Legends, a place where you can customize your own personal fairy that aids you with powerful new magic abilities on the battlefield. In an odd decision, Fairy Mode is not accessible right away, instead you need to crack open specific pots in Adventure Mode that unleashes the trapped fairy within. Each fairy has an elemental affinity that is useful against certain enemies, and you can feed your fairies special food to enhance their traits, making them more powerful in battle. Fashionistas can also spend time dressing up their fairies in various articles of clothing and accessories from The Legend of Zelda series, like Link’s tunic, Zelda’s dress, or Zora earrings. Cute. Like its Wii U brethern, Hyrule Warriors Definitive Edition is a triumph on its respective console. The hack and slash gameplay is slick, smooth, and fun, and the multitude of diverse playable characters keeps the action fresh. There’s a lot of content here, from the length campaign mode, to the challenge quests in Adventure Mode, to the new Fairy Mode that is both delightful to use and helpful in battle. Throw in several DLC characters, including the breakout star Linkle and Skull Kid, and you have a superb action-adventure game Switch owners shouldn’t pass up.