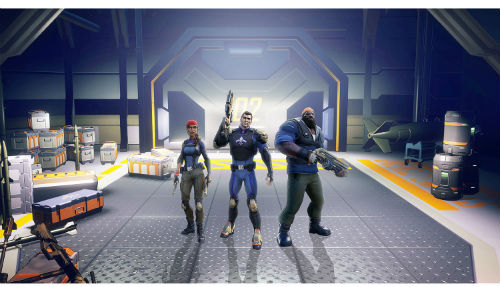 On the final day of E3 2016, Deep Silver and Volition invited me in for a one-hour private session with their brand new action-adventure IP, Agents of Mayhem. This amazing opportunity include a nearly 40-minute hands-on session where I got introduced to the game’s zany cast of characters and experience first-hand the explosive gameplay.

I was excited to learn off the top that Agents of Mayhem is set in the Saints Row universe and is even connected to the corporation the Saints run, Ultor, through their funding of an organization called Mayhem. Commanding an elite squad of morally grey Agents, Mayhem’s mission is to take down the evil Legion that is causing havoc all over the world. This game takes place in Seoul, one of many cities that Legion has a strong presence in. Volition’s signature humour is back in full effect here, and to give you a couple of quick examples, Mayhem actually stands for Multinational AgencY for Hunting Evil Masterminds, and Legion is short for League of Evil Gentlemen Intent on Obliterating Nations.

Where Agents of Mayhem creates its most humourous moments though are with the agents themselves, of which there are 12 in total, and 4 available in the demo I played. These agents come from all over the world, and instead of wearing similar looking suits, they each prefer to dress (and act) as they please, letting their full personalities out. For my mission, I chose Rama (a long-range archer), Hollywood (a pompous A-lister with an assault rifle), and Hardtack (a heavy character who loves to blast enemies with his close-range shotgun.) As you defeat enemies and cause, well “Mayhem”, you’re able to unleash your character’s powerful Mayhem abilities. My favourite was Hollywood’s, which has him don a pair of cool shades, smile for the camera like in an 80’s cartoon, and then unleash a flurry of pyrotechnics that explodes everything around him. During his Mayhem mode, Hollywood is also invincible for a brief period of time, and has unlimited bullets (cool!)

Of course my mission was equally as silly (this is Volition, after all), requiring me to hunt down an robotic K-Pop star who ends up defecting to the Legion and marrying their henchman Steeltoe. After corning Steeltoe on a building rooftop, his K-Pop lover downloads herself into his body and magnifies his size to giant proportions. During this boss battle, I frequently switched between my three Agents using the D-pad depending on the situation: Hardtack was great for dealing heavy damage at close range, Rama was quite effective at long-range, and Hollywood was an all-around performer that has an especially useful grenade launcher that dishes out high damage. Overall, I was extremely impressed with this game, both for its over-the-top humour and incredibly amusing cast of characters.

Fans of Saints Row and open world action-adventure games are really going to enjoy Agents of Mayhem when it releases later this year, so be sure to keep your eye for more updates coming soon!