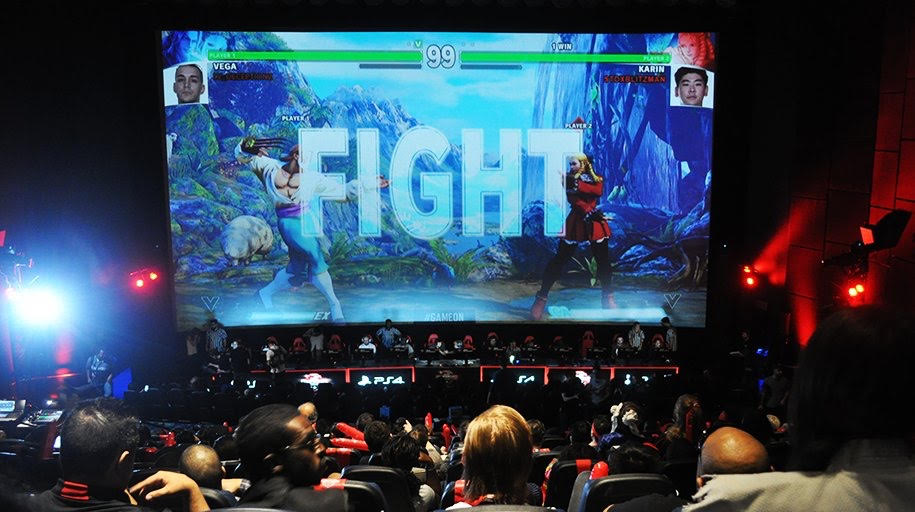 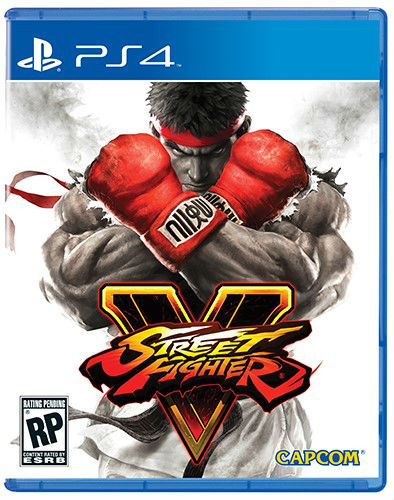 When I was a teenager, my friends and I loved Capcom’s Street Fighter II so much, we created a paper belt that was defended every school day during our lunch breaks. Back then there were no eSports, and the local arcades were the only place to find challengers outside your usual circle of friends. Imagine my mind-boggling elation then as I walked into the largest theatre in Toronto’s largest theatre complex to witness a capacity crowd fervently cheering on the country’s top eSports players battling it out in an epic Street Fighter V tournament. I pinched myself just to make sure I wasn’t dreaming.

If it’s not already apparent, eSports are blowing up worldwide, and here in Canada, Cineplex and WorldGaming are leading the way. Following their highly successful Call of Duty: Black Ops III Canadian Championships, they launched a national Street Fighter V tournament that begin with Online Qualifiers in March, and culminated with the Canadian Finals held in Cineplex’s flagship downtown Toronto location, the Scotiabank Theatre. A total prize pool of $25,000 was given out, with the winner walking away with a cool ten grand in cash. Imagine how much video game stuff you could buy with that. 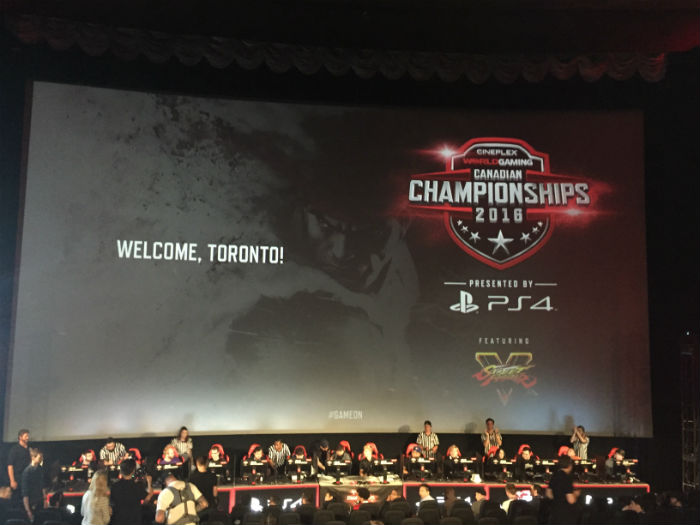 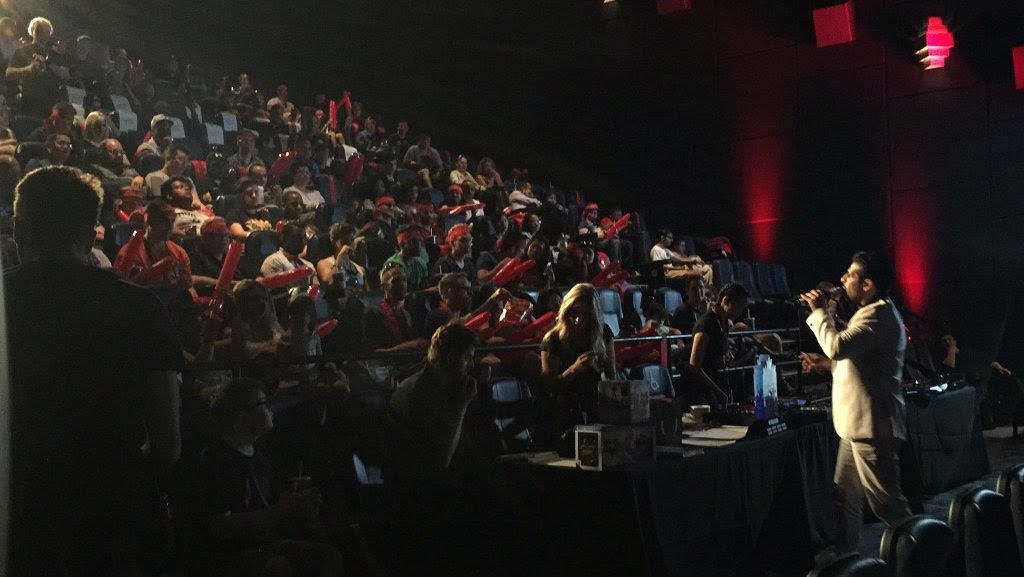 Having been to the Call of Duty Canadian Finals, and now the Street Fighter V Canadian Finals, I must say I’m truly impressed with what Cineplex and WorldGaming have put together and how they’re evolving these tournaments. The experience is everything a gamer could want: intense, highly competitive gaming action displayed on a massive theatre screen, full surround sound theatre audio, stadium seating so you always have a great view, live commentary from eSports professionals, an energetic emcee, free noise-making thundersticks, and tons of prize giveaways. If you’ve ever wondered what a live eSports event is like, you should definitely check out what Cineplex and WorldGaming have put together. The last two tournaments had Regional Finals in 24 Cineplex theatres across Canada, so there’s plenty of opportunity to so see what the hype is all about. 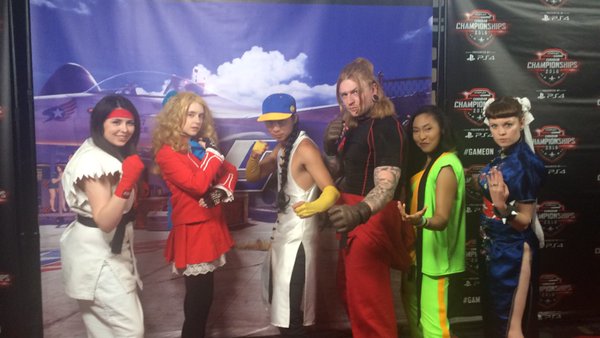 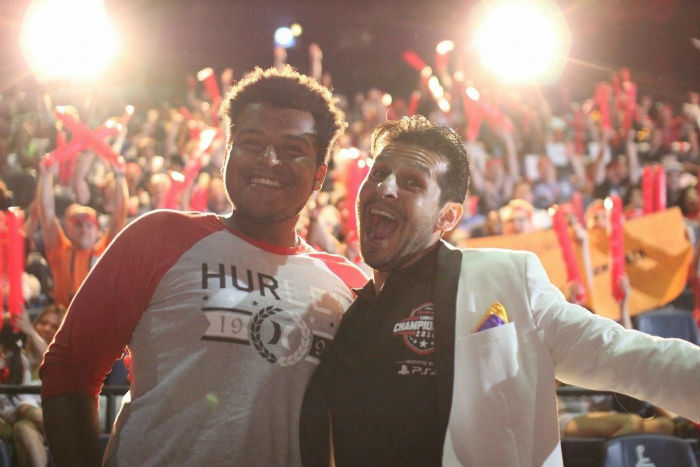 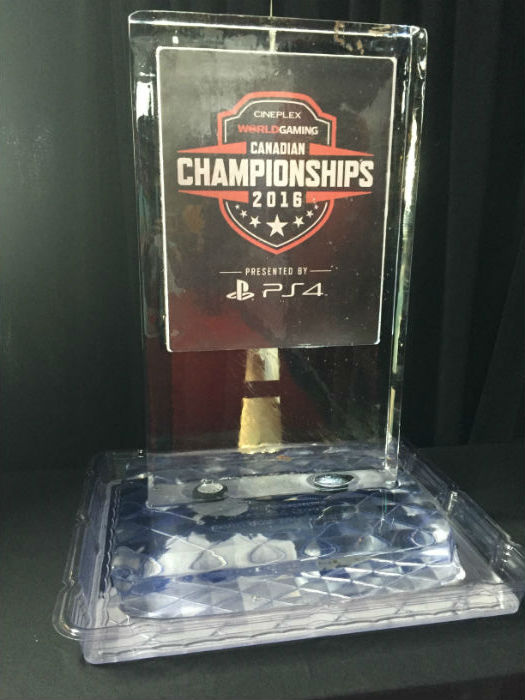 I’ve been watching live streams of the EVO Championship Series for years now, but this was my first time to see a Street Fighter eSports event in person—and it was even more amazing than I had imagined. 32 players, consisting of 24 Regional finalists and 8 wild card entrants, competed in a three-hour long elimination tournament that saw mind-blowing back-and-forth action like you wouldn’t believe. This was edge-of-your-seat excitement, and the crowd reacted accordingly: loud cheers, feverish clapping of thundersticks, and even fans jumping out of their seat. You see these types of reactions in live hockey or basketball sporting events, but to see this kind of reaction with gaming was a joyous moment to behold. That proof is in the pudding—gaming has truly gone mainstream and eSports really are the next big thing.

In between tournament rounds, the emcee kept the energy high with hilarious competitions where fans could win huge prizes. One such contest had a line of participants stand at the front of the theatre and imitate their best “HADOUKEN!!”, which is the classic fireball that Street Fighter mainstays Ken and Ryu toss. In another contest, entitled the “Cineplex and WorldGaming National Championship of Hot Dog Eating,” two fans went head-to-head to see who could eat a hot dog the fastest. Prizes for these, and other equally funny contests, included copies of the Street Fighter V Collector’s Edition, Plantronics RIG headsets, Cineplex gift cards, and Cineplex movie passes. 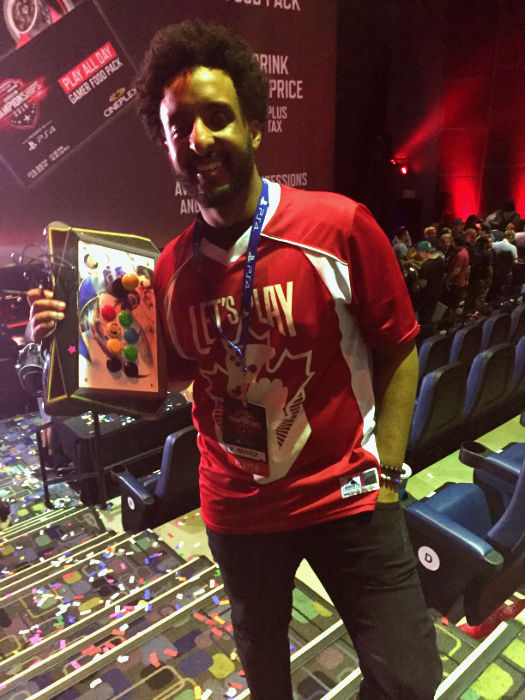 One aspects that stood out for me is how friendly and approachable the Street Fighter V eSports competitors were. While outside grabbing a bite to eat, I ran into Bernard Mafei who goes by the handle LP RaynEX, and was one of the wild card entrants in the tournament. He told me that all the players were super friendly backstage and the vibe was great; it seemed like they were all there to indulge in their love of the game and competition. Bernard also mentioned that each player brings their own arcade fight stick, like this high-end Mad Catz Street Fighter V controller, which they have to place on a designated table prior to the tournament so that the officials can review the controller settings and ensure fair matches. It was wonderful to hear how cordial the players were to each other, and equally nice to learn about how professionally run the tournament was.

A winner is crowned

The game matches were so thrilling and so intense, my heart was pounding the whole time (I wonder how the players themselves felt!) In the end, it was Henri Oung (Chirithy) from Montreal who was crowned the winner and he walked away with $10,000 in cold, hard cash. The second place finalist was Van Nguyen (Phife_Dawg) from Ancaster, who took home $4,000, and third place went to Matthew Rebelo (Empr Rebelo) from Mississauga, winning $1,500 in prize money. In grand fashion, the Street Fighter cosplayers came out on stage to present the winners with oversized cheques and to pose for pictures. Capping off the event was a huge burst of confetti painting the fans and seats with a multitude of colours.

Henri’s victory speech was heartfelt and full of personal stories, such as how he’s been a life-long Street Fighter fan and this win was a dream come true. He also said that if you’re a fan of video games, and especially if you want to play them professionally, to “let other people know what you do.” With video games having become universal, and eSports growing bigger by the day, his advice to not keep your hobby and passion to yourself certainly rang true.

Curious to know what goes on at these eSports tournaments? See for yourself in this amazing video produced by SetToDestroyX / Stax: 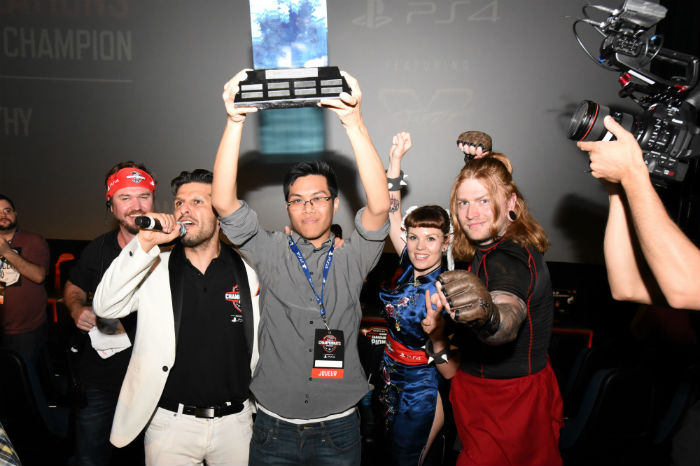 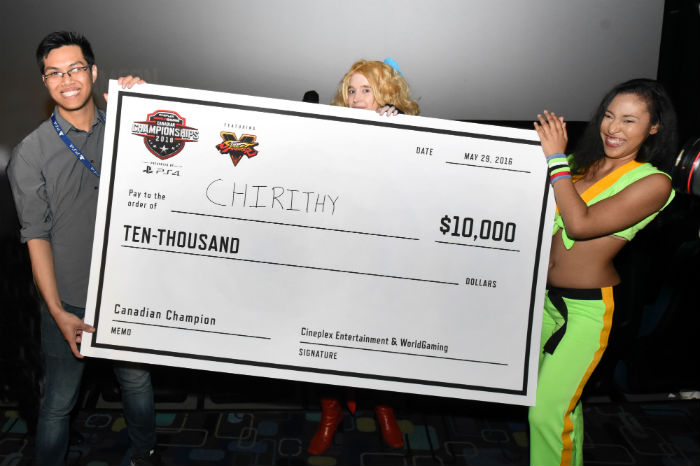 I still think back to those young teenager days, playing Street Fighter II in my parent’s basement and feeling immense pride every time I won or retained that paper belt. Gaming has come such a long way in such a short period of time; it’s been incredible watching gaming competitions move from local arcades all the way to huge national competitions in just a few decades.

So what’s coming up next? Well, Cineplex and WorldGaming made the splash announcement that the next Canadian tournament will be none other than Uncharted 4 team multiplayer. Get out your DualShock 4 controllers and start practicing, registration opens June 7!

See you at the next tournament!