It used to be that if you want a fantastic TV picture you would either need to get an OLED TV or a 4K UHD LED TV. Now LG has brought out the first OLED set that also has 4K Ultra High Definition. The result is nothing short of fantastic. LG’s previous generation OLED (55EC9300) was touted as having “the best picture ever” by CNET, and this new LG 4K OLED TV in my opinion is even better!

In addition to a beautiful picture, this LG OLED 4K TV is loaded with just about every feature you could possibly want. That includes a Smart TV with their latest webOS 2.0 platform, a curved screen, Ultra Surround Sound, and LG Cinema 3D. Although the stunning picture quality is the TV’s best feature, these additional features are like icing on your favourite cake.

As soon as I started watching this TV, my reaction was “wow!” The picture was so crisp, clear and natural that it looked almost 3D even though I wasn’t watching 3D content yet. I watched the 4K program Narcos on Netflix, a great series that I have been watching at home on my HD plasma. My HD plasma TV has an extremely good picture but as soon as I saw Narcos on this LG OLED set I was instantly impressed with the improvement in both colour and clarity. Wow!

I also watched a couple of 4K tourism films on YouTube. The first was a travel film for Norway, which was absolutely stunning. The colour and clarity that made it look like you could reach out and touch the snow, rocks, and water in each scene. The next film was for Budapest and although it had eye-popping clarity the picture almost looked surreal. I think it may not have looked as natural because of how and when it was filmed. A lot of the scenes were cathedrals and bridges at night so there was a lot of extra lighting—when combined with super high resolution, the film had a surreal less natural look. Nevertheless, the picture was extremely clear and colourful and still made me think “wow.”

In addition to being OLED, which is a superior technology for producing extremely good colour and contrast, LG has added a number of other technologies to make the picture so exceptional. Starting with 4K that provides 4 times the resolution of HD because it has that many more pixels. Each of the pixels are self-lighting turning on and off independently, which truly maximizes the contrast and colour quality. LG OLED also has their “Perfect Black” effect, which provides infinite contrast so every intricate detail is clearly visible. All said the combination of technologies produces a picture that I was truly impressed.

Although 4K content is still growing, LG has added a Tru-4K Upscaler feature to this set. It delivers near-4K quality viewing when displaying normal HD content. This means the excellent picture quality can be enjoyed with any content, and it works! I found the regular HD content to look nearly as good as the 4K content.

This set is probably one of the best looking TV’s that I have seen, if not the best. It has a slight curve to it that makes it look elegant. Adding to the elegance is a black screen with the thinnest bezel I have seen on any TV. It has an ultra-thin silver bezel so when the TV is turned on it looks like the picture fills the entire TV. It comes with a minimalistic looking silver stand that is heavy enough to provide excellent stability, but I would still recommend wall mounting it. You will have to use LG’s proprietary wall mounting hardware as a standard VESA wall mount won’t work.

The screen itself is extremely thin, while the bottom half of the back is much thicker in order to hold all the electronics. The back is made up of a hard white plastic and is equipped with plenty of connections. It has 3 HDMI and 3 USB connections conveniently located on the side. It also has a number of connections directly in the back: RF in, Component Video in, Composite in, LAN, RS232 mini jack, and a Digital Audio Optical Out. It comes with built-in WiFi but I would recommend using the LAN connection for more consistent streaming performance.

WebOS is one of my favourite Smart TV platforms because it is so easy to navigate. LG loads it with popular apps like YouTube, Crackle, and Netflix but it also has a wide variety of its own content. It has a large number of apps and games to choose from, most of which are free to download. It also has a full web browser that is very easy to navigate using the magic remote.

The magic remote has three features that make navigation and search capabilities extremely easy. The first is the on-screen cursor that is controlled by the push button track wheel. The second is the track wheel that allows you to easily scroll up and down through any screen. The last is a microphone on the remote with voice recognition capabilities so you can speak rather than type in your searches. Shortcut buttons on the remote also make it very easy to flip from one screen to another. Simple is good.

I have to admit that having a 3D TV at home has never been a big deal to me because I find the glasses are a bit of a nuisance and I find that 3D picture quality usually loses something. This LG OLED 55EG9200 may make me change my mind about that. I tested out the 3D feature by watching the Jurassic World trailer as well as the cartoon movie, Inside Out. Both were streamed from the Internet, and they looked fantastic. The cartoon 3D effect was slightly better than Jurassic World, but both wanted me longing for more. The picture was crystal clear with vibrant colour, the 3D was very effective, and the glasses were pretty comfortable to wear.

I could easily see myself seeking more 3D content with this TV because it has such a nice picture. The TV will also do 2D to 3D conversion and vice-versa but unfortunately I forgot to test this to see how well this works. For gamers the TV also has a dual-play mode so special dual-play glasses will allow full screen viewing for both players.

TV’s, especially very thin ones like this one, typically don’t have tremendously good sound because it is hard to put decent speakers in such a skinny frame. Having said that, the LG OLED 55EG9200 had much better sound than I expected. It has a 2.0 channel speaker system that tries to emulate a surround sound. It doesn’t come close to what my 5.1 surround system at home can produce, but it sounds pretty decent for a skinny TV.
Part of the reason is that it has 20 Watts of output power, comes with a DTS and Dolby Digital Decoder as well as Clear Voice II enhancement technology. In addition it has 6 sound modes so you can select the best sound mode, depending on what you are watching.

For a TV this good to watch, I would highly recommend getting a good surround sound system for truly immersive experience. But for the times you have to rely on the TV sound system, it’s not bad.

This OLED 4K UHD TV has a few other features worth mentioning. For instance, it comes with LG’s Smart Share capabilities. This allows you to share media using a remote app or network file browser. It also allows using the TV as your Smartphone screen using their Miracast feature. So imagine casting your Smartphone content on to your TV rather than looking at your small screen. It is great for sharing photos or other content that you can instantly share with others on the big impressive quality screen.

Because it is an OLED TV, it has an extremely fast response time so motion blur is non-existent. This is great for gamers or whenever you are watching fast-action movies or sports. The clarity of the picture won’t go away no matter how fast the scene.

OLED technology is also very energy efficient so it is no surprise this TV is Energy Star rated. Its low energy consumption will make anyone happy that pays attention to that.

The only two things I wish this TV had, and they are minor options, is lit buttons on the magic remote and HDR (High Dynamic Range) picture technology. Lit buttons very convenient when you are watching TV in a dark room, but once you get used to where the buttons are it will become less of an issue. The HDR capability may be more important in future as a streaming technology that delivers a better picture. Having said that, the picture on this TV is as good as I have seen on any TV. It is truly fantastic! 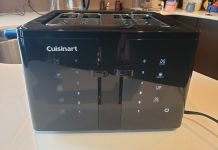 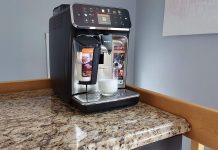