Music lovers are sure to enjoy today’s review! Whether you’re ultimately attracted to this little device or not, you’ve certainly got to give it a look. It’s the Mighty Vibe Spotify Music Player for Bluetooth & Wired Headphones, and it’s definitely doing something different in the realm of Portable Music Players. This barely-bigger-than-a-toonie music storage device and player works with the Spotify digital music service (Premium only—more on that below) to allow you to enjoy your music (up to 5 hours of it) or favourite podcasts wherever you go, and while offline. It syncs to your Spotify App and downloads your playlists to later be enjoyed via a Bluetooth speaker or headphones, or with standard plug-in earphones. Read on for all the details of this very cool little music delivery device.

What is the Mighty Vibe Spotify Music Player?

If you’ve ever been on an airplane with no Wi-Fi or camping in the deep woods, you know how frustrating it can be not to have access to your favourite smart phone apps and services. Well, those are just the kinds of scenarios that the Mighty Vibe Spotify Music Player was designed for.

By syncing to your existing Spotify App and allowing you to download and store your favourite music and podcasts, the Mighty Vibe allows you to take your tunes everywhere with you and enjoy your music even when the app itself is unable to stream.

Similarly, if you don’t like taking your smart phone with you (like on a sweaty run where you risk dropping and breaking it), now you don’t have to. The Mighty Vibe is durable enough and sweat-proof enough to take your phone’s place—it even clips onto your clothing so you don’t have to hold onto or pocket it, and it will also keep you from draining your phone’s battery entirely through playing music.

Among the other features of this fun little gadget are Bluetooth compatibility (so you can use it with a quality wireless speaker), a physical earphone jack (in case you don’t have Bluetooth compatible earphones or a wireless speaker), easy (and automatic) syncing to your Spotify account (even while you sleep), and 5+ hours of offline continuous music playback—all from a device that weighs just 0.7 ounces (or 20 grams, which is far less than the typical bag of chips).

I’ve been testing the Mighty Vibe for a couple of weeks now, and I’ve been extremely happy with its design and performance so far. I really like that it’s small and lightweight enough to easily carry pretty much anywhere (I’ve mostly been using it on walks and hikes), and the sound it produces through my Sony over-ear headphones has been brilliant. These considerations obviously make the Mighty Vibe great for runners that prefer not to carry their phone to enjoy their Spotify account.

To get your device up and running, simply charge it up for approximately one hour using the included USB charging cable (see photo below), download the free Mighty App, and begin following the in-app instructions (the included written instructions are practically non-existent). Note that the battery life should be in the neighbourhood of 5 or so hours, though it was difficult to get an exact measurement since I was listening to my music on and off over several days. It’s also worth mentioning that you can check your remaining battery life by connecting to the app, though not on the device itself.

I will admit to having a bit of difficulty getting the device to initially sync to my Spotify account. I would explain all the details of why this was the case if I actually knew or understood what was going wrong. At one point I did have to undergo a firmware update, so I suppose that may have been the issue. Shortly after doing that, the trouble did seem to resolve itself and everything was up and running.

My only other real complaint about the Mighty Vibe is that it only works with a Spotify Premium account—not the free basic version. For several months I’ve been using the free version of Spotify, which is somewhat annoying in that you periodically have to listen to audio advertisements (I believe it’s one 30 second ad for every 30 minutes of uninterrupted play), and your ability to skip ahead (past the randomized songs in your playlist) is greatly limited.

For the purposes of testing the Mighty Vibe, I took Spotify up on its offer of a free 3 month trial of their upgraded service, which allows you to skip as many songs as you like and listen to any part of your playlist whenever you want entirely ad free. Spotify also seems to have every song known to man in its music library (at least I’ve never been skunked so far when searching for a title I wanted to add to my playlist), so that’s certainly cool.

The problem with all of this, however, is that I have a personal policy against “renting” music. If I like a particular song, I prefer to buy and own my own copy of it that I can listen to whenever I want. This used to be done via a physical CD at one brief period of human history, though now it’s usually in MP3 format to be stored on a similar music storage device to the Mighty Vibe (i.e., an MP3 player). Since I refuse to rent music, I would never and will never pay for the Spotify Premium music service, meaning that even as much as I like the Mighty Vibe device, there would be little point in me ever owning one myself.

However, for anyone that does use Spotify Premium, I can very easily recommend the Mighty Vibe, as in my experience it is 100% as advertised.

Please take a minute or two to watch my brief video show-and-tell for the Mighty Vibe Spotify Music Player. In it I show some up close footage of the device, talk a bit about the Mighty Vibe App, and let you know some of what this little device can do:

I have to say, I really enjoyed using the Mighty Vibe Spotify Music Player! It was nice to have access to the songs in my Spotify playlist while out walking and hiking without having to drain my phone’s battery. Of course, I still take my phone with me anyway in case I need to make or receive a call while I’m out there, but now I don’t have to drain my battery by about half just by listening to music on an hour or so walk (nor do I have to use so much of my monthly data streaming music).

Also, since I have (some) different songs in my Spotify playlist than on my MP3 player (sometimes you like a song enough to listen to it, but not quite enough to buy it), it’s nice to have access to that playlist whether or not I have access to Wi-Fi. While I continue to dislike the idea of merely renting music that I could otherwise buy, the Mighty Vibe is certainly a great option for Spotify Premium users that would enjoy having access to their Spotify account when Wi-Fi access isn’t readily available. If I weren’t so stubborn about not wanting to pay for Spotify Premium, I could easily get used to having a Mighty Vibe of my own.

You can find your Mighty Vibe in one of 3 cool colours right now at Best Buy Canada. 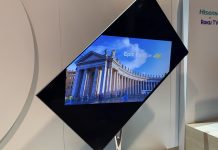 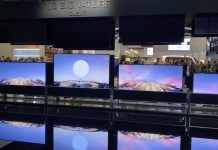