<— This, is Ollie! He’s quite an interesting little fellow. There are both some good and some not-so-good points about him, and I cover them all below. So, let’s get started!

The first thing that bears mentioning about the Sphero Darkside Ollie App-Controlled Robot is his size and weight (I’m not quite sure why I’ve identified Ollie as a male—it just feels right). Anyway, he’s about the same size and weight as a full can of Campbell’s soup—roughly. Let’s say Chicken Noodle, because that’s my fav. He’s also a bit bottom heavy when sitting on his 2 wheels (as in the header image as well as the one at right). This is because there’s some sort of an oscillating weight inside of Ollie that helps him keep his balance (keep him upright). All in all he really feels quite solid. In fact, I’d have to say that one of the best features of Darkside Ollie is his durability of construction. This little guy feels very, very sturdy. For his size, he’s got some good heft  to him. To me this always implies a certain level of strength and toughness in any product. As Ollie’s outer shell is made of highly durable polycarbonate, I have no shortage of confidence in his ability to withstand breakage—a fact that certainly bore out in my testing as I was not exactly shy about pushing Ollie quite hard. He never flinched! 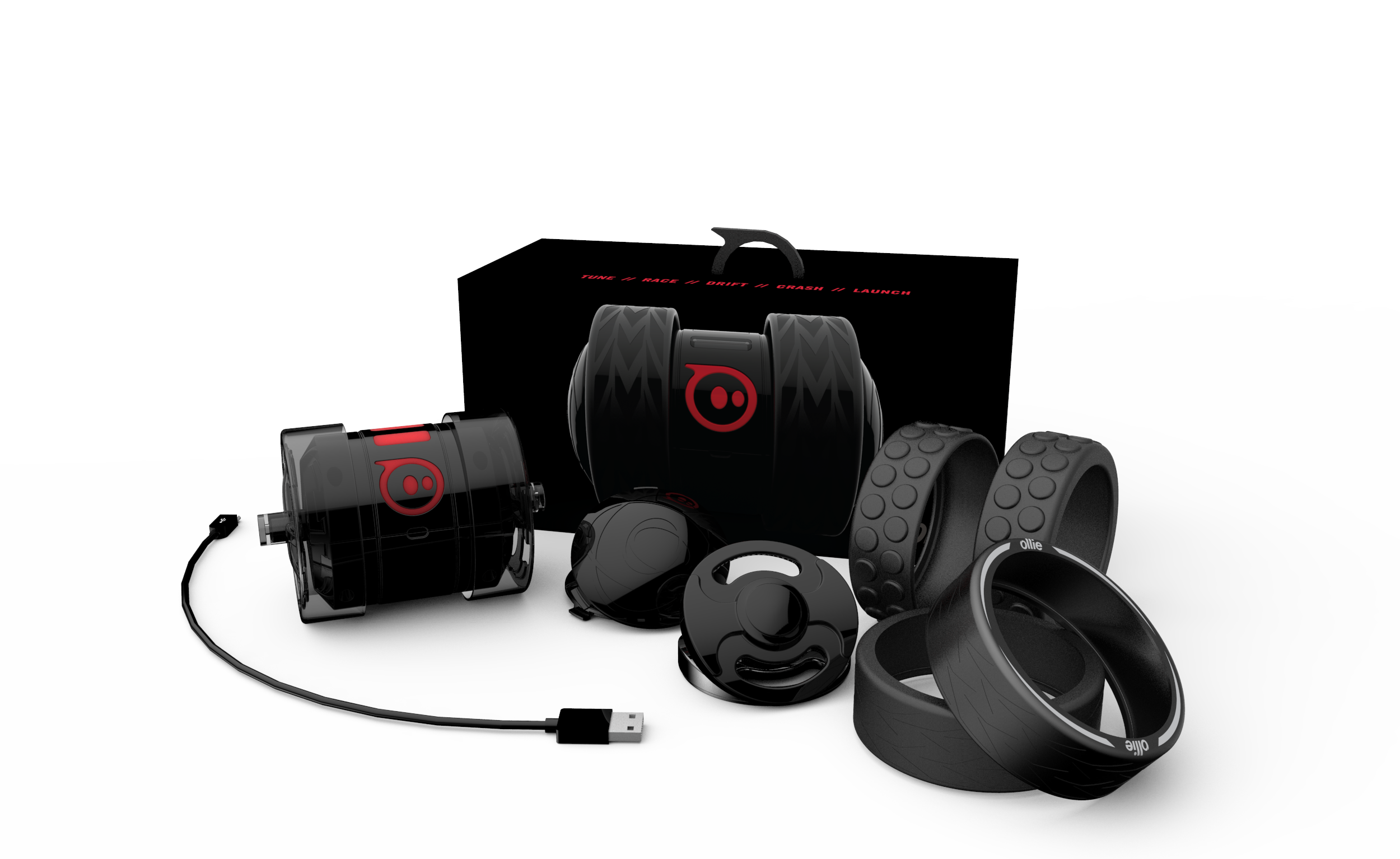 One of the coolest aspects of Darkside Ollie is that he’s completely controlled by your smart phone. There’s no separate remote control apparatus to carry around with you. Simply download the Ollie App from either Google Play (Android users) or the App store (iPhone / iPad users) and install. Once you’ve paired your phone to Ollie via bluetooth, you’re ready to roll—literally! Ollie takes roughly 3 hours to fully charge (using a standard, included, USB cord), and you’re supposed to get approximately 1 hour of play time on a full tank. I didn’t quite find that I got this long (more like half an hour or so). Of course, I did, as I said, push Ollie rather hard, and the driveway where I’ve mostly been using him is on a slight slope, so he might have been drained a bit faster from frequently having to climb up hill.

It should also be noted that Ollie will often refuse to pair with your phone if he is not fully charged. This can be a bit annoying at times—particularly if the bluetooth connection is broken and Ollie asks to be “woken up” before he will reconnect to your device. You may need to do a short recharging session before Ollie will begin to cooperate again. I did find, however, that Ollie doesn’t easily lose his bluetooth connection. It only happened to me when I took him quite far away from where I was standing (100+ feet away, which may have been pushing his range to its limit) or when he had already been running for a decent amount of time anyway. There’s one important note that I must give you concerning the bluetooth connection between your smart phone and your Ollie: It is absolutely imperative that you have at least the Bluetooth 4.0 internal hardware in your phone or iPad. If you don’t, your Ollie won’t be able to talk to your phone. Initially I was trying to use Ollie with my Samsung Galaxy S II phone, but it wasn’t working and I wondered if I had a defective Ollie. I wondered even more when my wife’s iPhone 4 got the same result and nothing happened. It was actually my wife that found out that neither of our phones were compatible with Ollie because our bluetooth hardware did not meet Ollie’s minimum requirements.

By chance I was about to upgrade my phone anyway, and my new phone (the Galaxy S5) does work with Ollie. So, there was never anything wrong with my Ollie at all. The lesson to be learned here is to be sure and check (before you buy an Ollie) that whatever smart phone you’re using meets Ollie’s minimum requirements. Click HERE (on the Sphero website) to determine whether or not your phone meets the minimum requirements to control Ollie. Note: The website is a whole lot more helpful for iPhone users than for Android users unless you really know your device quite well. 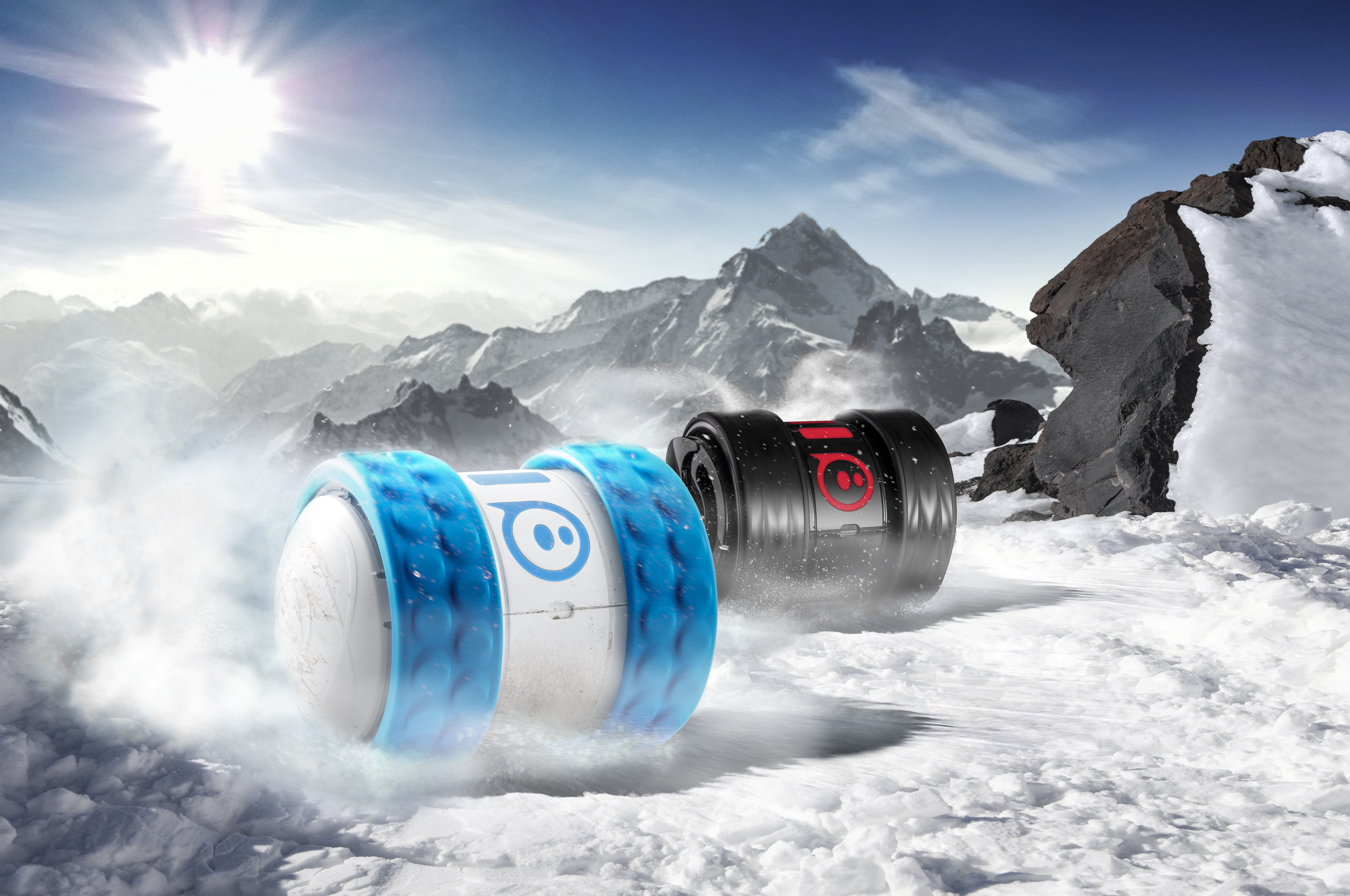 Darkside Ollie is said to travel at up to 14 mph (22.5 Km/h), though it didn’t feel to me like he was going quite that fast. He still went fast enough to be lots of fun though, and if I’d had someone else to race it against, it would have been extra good fun! Also, to be fair, I didn’t have the smoothest of surfaces to run my Ollie on, and therefore I always used his nubby tires (the ones meant for traction rather than speed). Ollie does come with 2 sets of tires, and the other set is smooth like racing tires (think of Indy style racing cars). I suspect that, given a smooth basketball floor and the special racing tires, I could probably have gotten my Ollie running pretty close to that 14 mph. In the image (at left) Darkside Ollie is racing against his lighter cousin (i.e., the enemy!). Darkside has the racing tires on, but since they’re in snow and white is using the nubby tires for traction, he’s got the lead.

I can also report that Ollie is not averse to tricks, jumps, and stunts. For instance, set up some ramps for your Ollie and you’ll have a real blast jumping them. All I had was a speed bump in the back lane, but even that worked fairly well. If you set your Ollie to trick mode, you can easily pull off a number of cool maneuvers—things like making Ollie spin around and around wildly, or even go up on one end while spinning, for example. Although I found that it took a while to get the hang of driving my Ollie around and making him go whereever I wanted him to go, the tricks are designed to be very easy to accomplish. A special trick pad in the app allows you to do the tricks with simple finger swipes. You’ll probably be doing some amazing tricks before you even get used to steering your Ollie. Take a look at this video featuring Chuck from Sphero demonstrating several of Ollie’s most fun and easy to master tricks:

Since he shows up in the racing image above, I might as well also tell you that there’s another version of the Sphero Ollie App-Controlled Robot – In White. He’s pretty cool too … I guess.

My final word on the Sphero Darkside Ollie is that he’s definitely a lot of fun to play with, and I do recommend him. I typically like for my RC toys to come in more familiar shapes, like race cars & monster trucks. However, if you don’t mind the soup can design and the fact that Ollie is just a little guy, then he’s definitely worth giving a try. Once I got my phone / bluetooth issues resolved, it was all smooth sailing. Even the (sometimes quite severe) bumps and bangs didn’t hurt or discourage Ollie. He’s one tough little guy!