If you spend any time around children then you have definitely heard about Paw Patrol by now, and like any popular animated kids show they also have many toys based on the show available on the market.

The TV show Paw Patrol is about a young boy named Ryder who has a pack of rescue dogs and they live at Adventure Bay. Ryder is super tech savvy and each of his dogs have their own special skills, gadgets and vehicles that they use on their rescue missions. Funnily enough I myself have a son named Ryder who absolutely loves animals of all kinds, but especially dogs.

Today I’m reviewing the Paw Patrol Zoomer Marshall and I’m pretty sure your Paw Patrol lover will be wanting one.

In the box you will find Zoomer Marshall, who looks like a dalmation to me and his job is to save lives and fight fires. There’s also two water cannons that can be launched from his pup pack on his back. You’ll also find a reference guide and instruction booklet. Not in the box but also required for play is 4 AA batteries so if you’re planning on giving Zoomer Marshall as a gift then I recommend picking up some batteries to wrap with the toy. 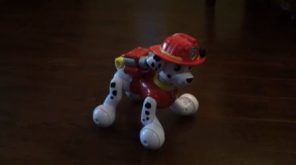 Zoomer Marshall is a fun interactive toy for ages 3 and up. He talks, moves and even responds to touch and movement. By pressing down on his head he’ll say 150 different sounds and phrases that your child will recognize from the TV show. They will especially love hearing the Paw Patrol theme song and the Pup Pup Boogie which I know my little nieces and nephews love dancing to.

Zoomer Marshall also does over 80 tricks and missions that can be played by pressing on his fire badge on his chest. The missions are little games that your child will recognize from some of the Paw Patrol episodes and your child can play along too.

To play with Zoomer Marshall you turn him on with a switch under his belly. There’s also two volume levels to choose from, trust me the lowest volume level is plenty loud enough. I also love that Zoomer Marshall is bi-lingual, you’ll notice another switch labelled with an A and B option. Option A is Zoomer Marshall in English and option B is French. Once you’ve turned him on you can push on his head or press his fire badge on his chest to play. Zoomer Marshall also has motion sensors on his chest as well so he can sense your child’s movement and include them in play.

Zoomer Marshall looks exactly as he does on the Paw Patrol TV show which is great. Kids want to play with toys that they are familiar with and actually look like their favourite TV character. His face is really animated and looks friendly. His paws are replaced with wheels and not only does he roll around but his legs also move from the joint where his legs meet his body which allows a large range in motion not just rolling back and forth. He can easy roll on hard surfaces such as tile and hardwood and even over transition strips and carpets. I did notice he slowed right down and had a hard time maneuvering on my longer shag area rug.

When you push on Zoomer Marshalls head he’ll say phrases that kids will recognize from the show but he also talks to your child in a way that will make them want to interact back with him. He’ll also sound the fire alarm to let your child know he’s ready for action. It’s really easy to push down on his head so even younger kids will have no issues here. Zoomer Marshall comes ready for saving lives and fighting fires with his fire hat, vest with badge and his pup pack with water cannons that are ready to launch with the push of a button. To play games with Zoomer Marshall you push his badge button on his chest. Some of the games you can play with him are finding a missing Chickeletta and putting out campfire coals that have escaped and rolled away. He gives easy to follow step by step instructions so your child can play along with him. Zoomer Marshall is pretty smart too, if he tells you to open or close his pup pack and you don’t do it, he’ll repeat the instruction. I love that he’s a true interactive toy in this way, your child will have to listen and follow the instructions while playing. He’s both educational and fun.

Watch my short video on why your Paw Patrol loving child will love Zoomer Marshall here:

Zoomer Marshall is a really cool interactive toy and I think any Paw Patrol fan out there will love to play with him. I was really amazed at his range of motion and the amount of fun phrases and games available to get your child really involved in playing with him.

He looks exactly like he does on the TV show when he’s suited up to do his job saving lives and fighting fires. I love that they made his tail out of a softer more rubber like plastic because it could cause an injury if it were a hard plastic. His pup pack is really easy for even small hands to extend and his water cannons shoot with the simple push of a button.

I am a huge advocate for kids spending more time playing with their toys and using their imaginations and Zoomer Marshall will encourage imaginative play with his interactive games. I have a feeling I may be buying one or two as Christmas gifts this year for my niece and nephews who are at the Paw Patrol loving age.

You can check out bestbuy.ca for Paw Patrol themed toys and accessories as well as Zoomer Marshall who’s coming soon.