If you haven’t kept up with LEGO over the past few years, you may be surprised to learn how much amazing variety there is across the entire LEGO spectrum. If you’d like to catch up on one of your favourite childhood toy systems, join me today as I explore a handful of LEGO sets comprising such diverse themes as Star Wars and Jurassic World. The truly great thing about LEGO is that there’s something for absolutely everyone. So let’s take a look. 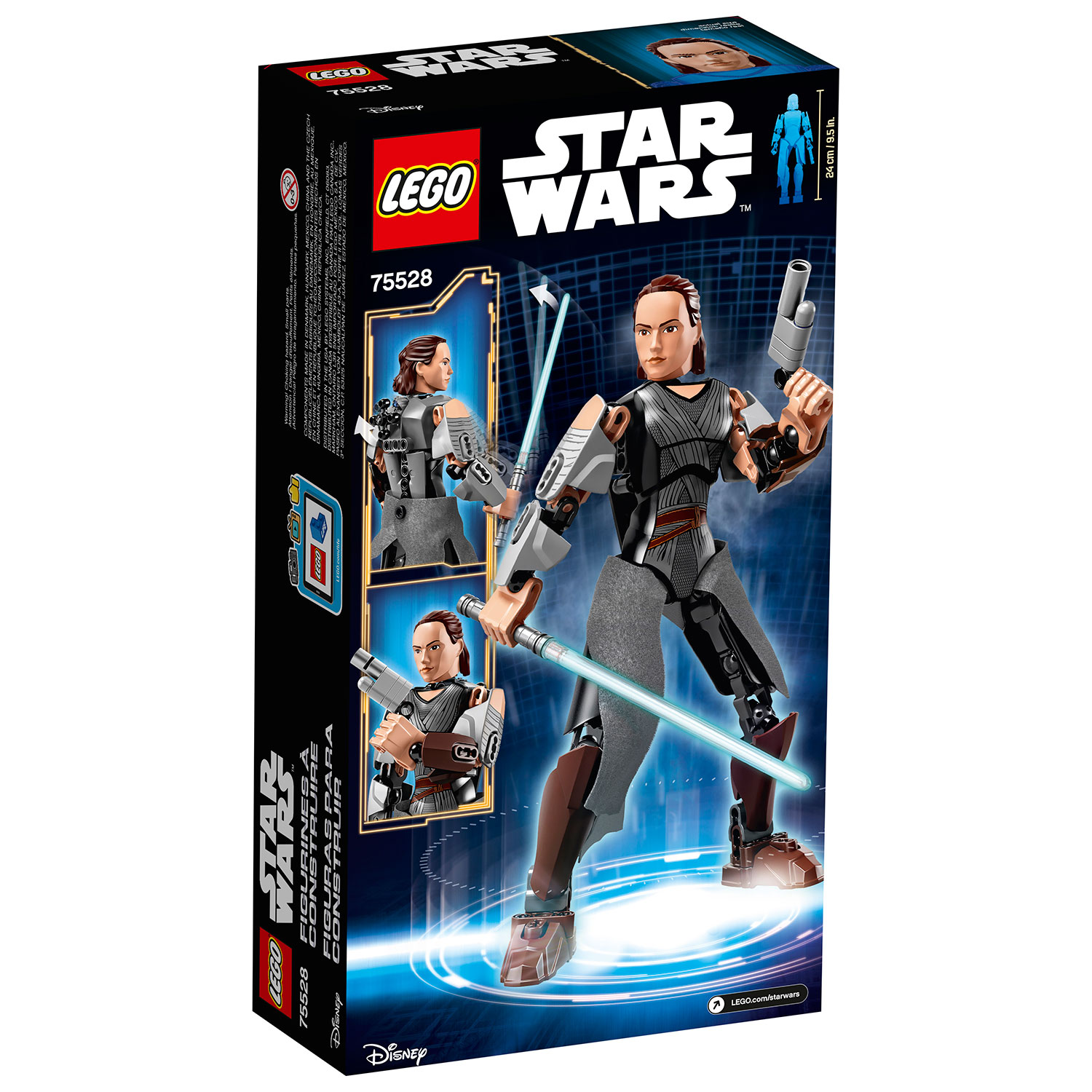 You may or may not be aware that in recent years LEGO has created a whole new type of building toys. They’re called LEGO buildable figures and they’re super cool and super fun! I actually have one of these figures myself from a couple of years ago. But more recently there have been figures representing Star Wars Episode VIII: The Last Jedi. One very cool example is the LEGO Star Wars Buildable Figures: Rey. With just 85 individual pieces to figure out, you can literally assemble one of these figures in no more than an hour. And, once the figure is finished, you can play with it as with any other action figure. Alternatively, you can display it as part of a LEGO Star Wars display, disassemble it and mix the pieces with another set, or build in its proper form over and over again to simply enjoy the process. When I got my General Grievous a couple of years back, I built it in roughly one hour and had heaps of fun displaying it in all kinds of amazing poses. This Rey figure stands at roughly 9 inches tall, and she even has a cool action feature whereby her arm can move to simulate a lightsaber swinging action. There’s no doubt about it, LEGO Buildable Figures are one of the most exciting LEGO product lines to come along in a very long time, and I sure hope they keep them coming!! 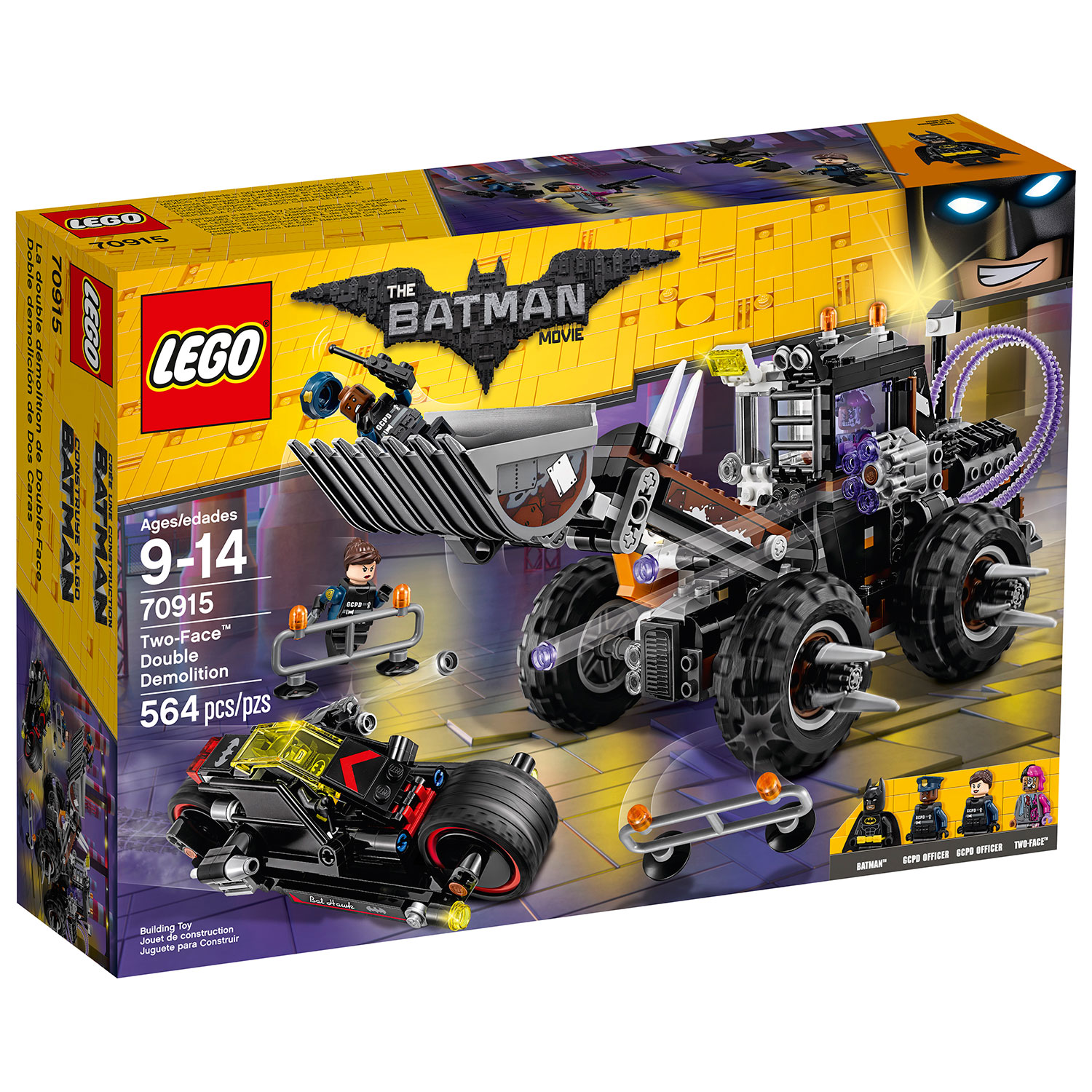 If Star Wars isn’t your thing but maybe Batman is, then allow me to take another crack at it with this fun LEGO Batman Movie: Two-Face Double Demolition set. At 564 pieces, now we’re really getting into some challenging territory. There are 4 mini figures included this time around, consisting of Batman, Two-Face, and 2 GCPD officers. Additionally, there’s a huge excavator with numerous articulating parts, including an operational arm and bucket, and a 6–stud rapid shooter. But that’s not all that this set has going for it. Also included is a fully outfitted 2-whelled Batcycle with an opening cockpit for your mini Batman figure. Not to be outgunned, this Batbike also features rotating flick missile and double stud shooters, not to mention its clear yellow windshield and Batwing doors. And I’m barely catching the surface of what this set includes. In fact, there’s more than enough going on with this set to keep any 9+ child building and playing for days on end. I’m not a huge Batman (or DC, for that matter) fan myself, but even I can see the appeal of the excavator and Batcycle that mostly comprise this set. And if you’re a fan of the LEGO Batman movie, I’m sure you’ll see that appeal too! 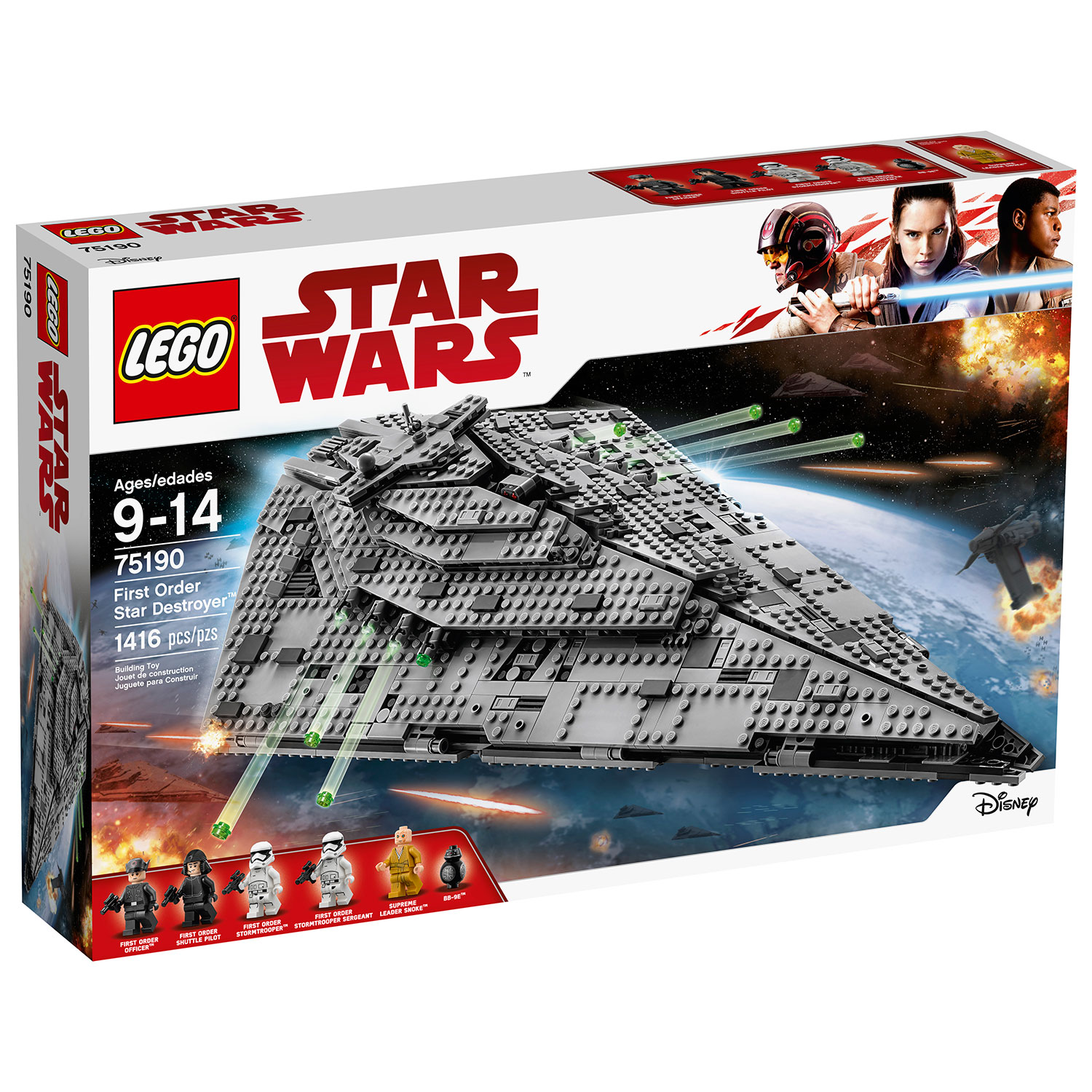 Returning briefly to the theme of Star Wars, I wanted to go really big and show you the LEGO Star Wars: First Order Star Destroyer. This thing is absolutely MASSIVE! Some say it’s as big as a real-life Star Wars First Order Destroyer (though I personally suspect they’re exaggerating). In any case, you’ll spend days getting this whopping 1416 piece monster together, and then months more enjoying the finished ship. With 7 fun mini figures (including Supreme Leader Snoke and a special BB-9E droid figure), as well as a fully detailed ship’s interior (which panels open up to reveal), this ship is sure to strike fear into the hearts of any Resistance mini figures you may happen to have lying around from other Star Wars LEGO sets. Other features include an elevator you can operate yourself, a special chamber for Supreme Leader Snoke, and hand-held weapons (blasters and pistols) for the First Order Officer and Stormtrooper mini figures. There’s even a special Medical Droid with which to revive and reanimate any potential future Darth Vaders that may happen to come along. All up this is one LEGO Star Wars set that any fan of the newer Star Wars movies is sure to appreciate. And maybe even some hard core original trilogy purists as well. 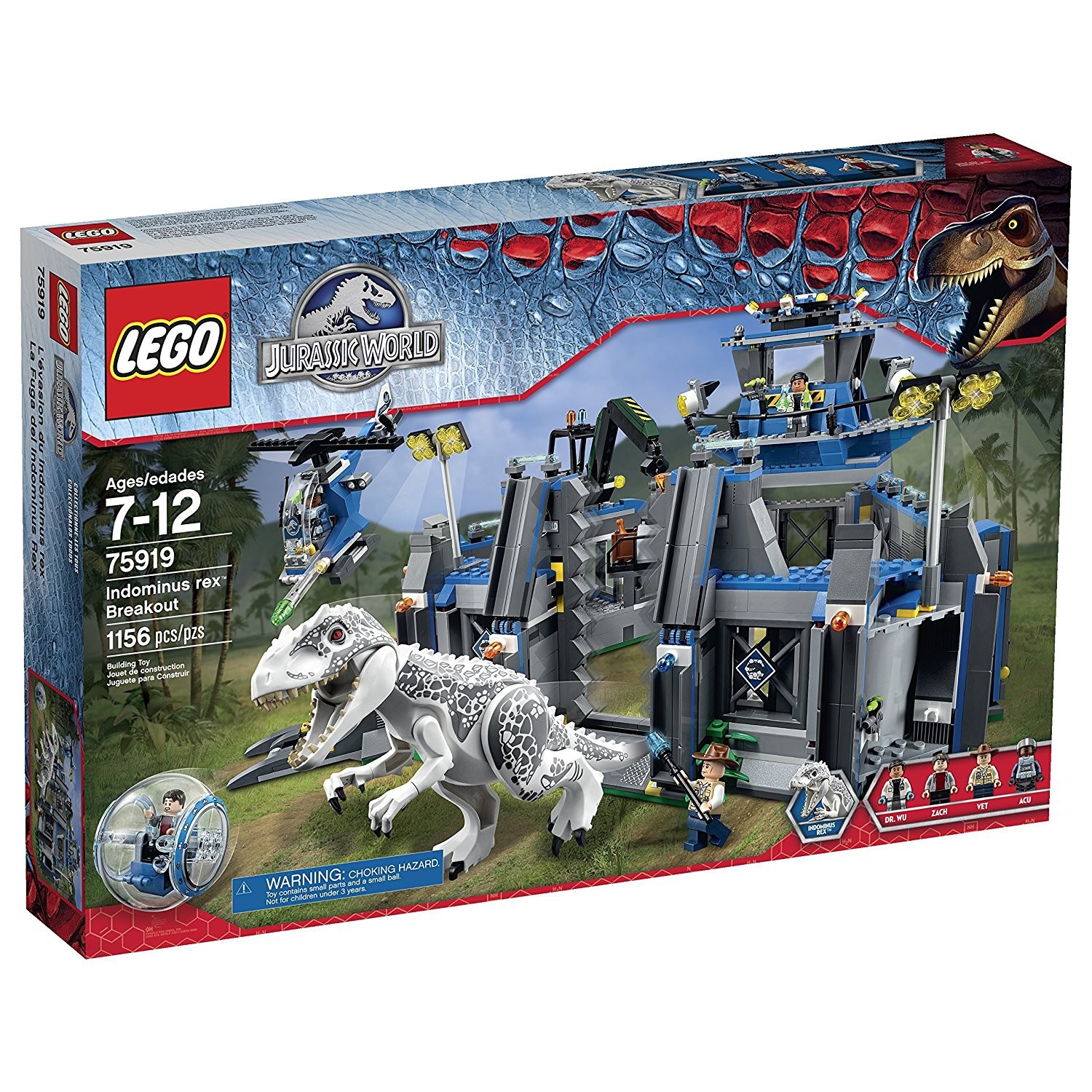 Another exciting playset option is the LEGO Jurassic World: Indominus Rex Breakout set. One reason this set appeals to me is because a new Jurassic World movie is coming later this year and I am super excited about it! In any case, in this set you’ll find not only the pen that the Indominus Rex escapes from in the first Jurassic World movie, but also the Rex itself, a helicopter with which to try and retrieve him, a gyro sphere for Zach (one of the kids from the movie) to ride around in, and several mini figure characters, including Zach himself and the infamous Dr Wu. With 1156 pieces to keep you busy, this set is sure to entertain for a good long time to come. The Indominus Rex alone is an amazing LEGO creation, and everything else about this set also looks incredibly cool. If you’re both a Jurassic Park/World and a LEGO fan, then this is a can’t miss set. And it’s probably just a matter of time until we start seeing sets related to the next Jurassic film. WOO! 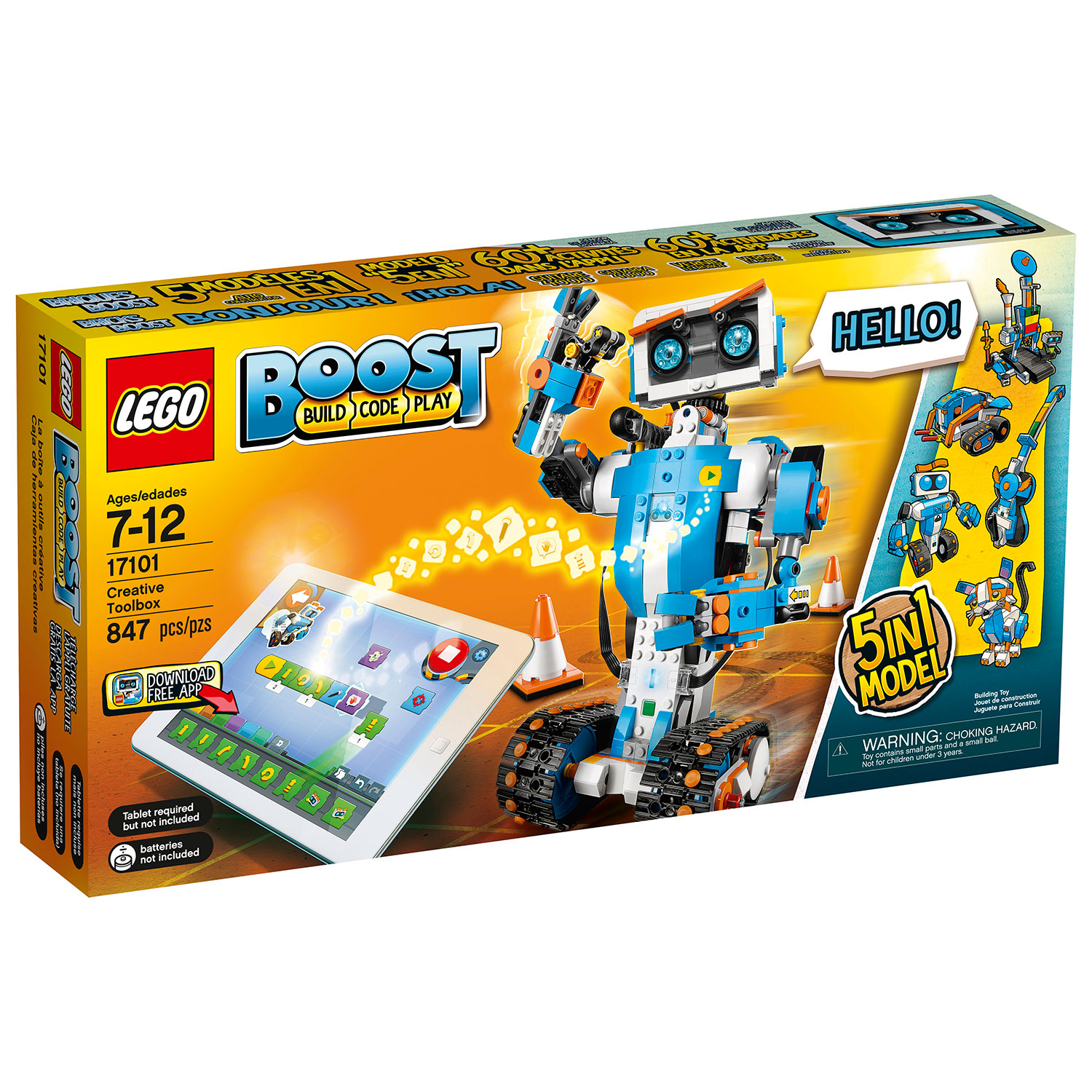 Finally we come to what might just be the coolest LEGO creation of all time. It’s the LEGO BOOST Creative Toolbox, and it gives you the option to build any of 5 different fully functional designs. There’s an interactive robot called Vernie (he walks, he talks, he even has facial expressions!), an imaginative vehicle called M.T.R.4 (Multi-Tooled Rover 4) that can be customized with various tool attachments which can then be used however you see fit, a fun factory called AutoBuilder that actually assembles miniature LEGO models (WOW!), a friendly cat called Frankie (that might just become your new favourite pet), and a special guitar called Guitar4000 that you can actually play real songs on. This thing is truly incredible. I honestly want one of these myself! Of course, it works with a tablet that you have to supply yourself (the accompanying app, of course, is free), and is considered suitable for those ages 7 and up. With 847 pieces to keep you building and rebuilding over and over again for many years to come, I really can’t think of any build toy currently available that’s as exciting as this one is. The good folks at LEGO have certainly outdone themselves this time. For a better look at the 5 special builds that the LEGO Boost set includes, take a good look at the photo above. From left to right we have AutoBuilder, M.T.R.4, Guitar4000, Vernie the robot, and Frankie the cat. My favourite is probably the guitar… or maybe Vernie. How about you? If you have a favourite build from this set, or a favourite LEGO set in general, please let us know in the discussion section below. I’d love to hear what appeals to LEGO fans across Canada.

If you’re anything like me, you’re probably a lifelong appreciator of LEGO. The brand itself currently represents the largest toy company on this planet, and rightfully so. For decades it’s been coming up with some of the most creative and educational toys the world has ever seen. I highly doubt this is about to cease in 2018, but even so, this is a great time to rediscover LEGO and explore its many realms. In fact, there are many other themes and types that I simply couldn’t cover here, but if you’d like to discover some of them for yourself, you can start by visiting Best Buy’s vast virtual vault of LEGO and Building Toys. But be prepared to stay a while, because there’s an absolute ton to see. Until next time, thanks for visiting the blog and have an excellent day!