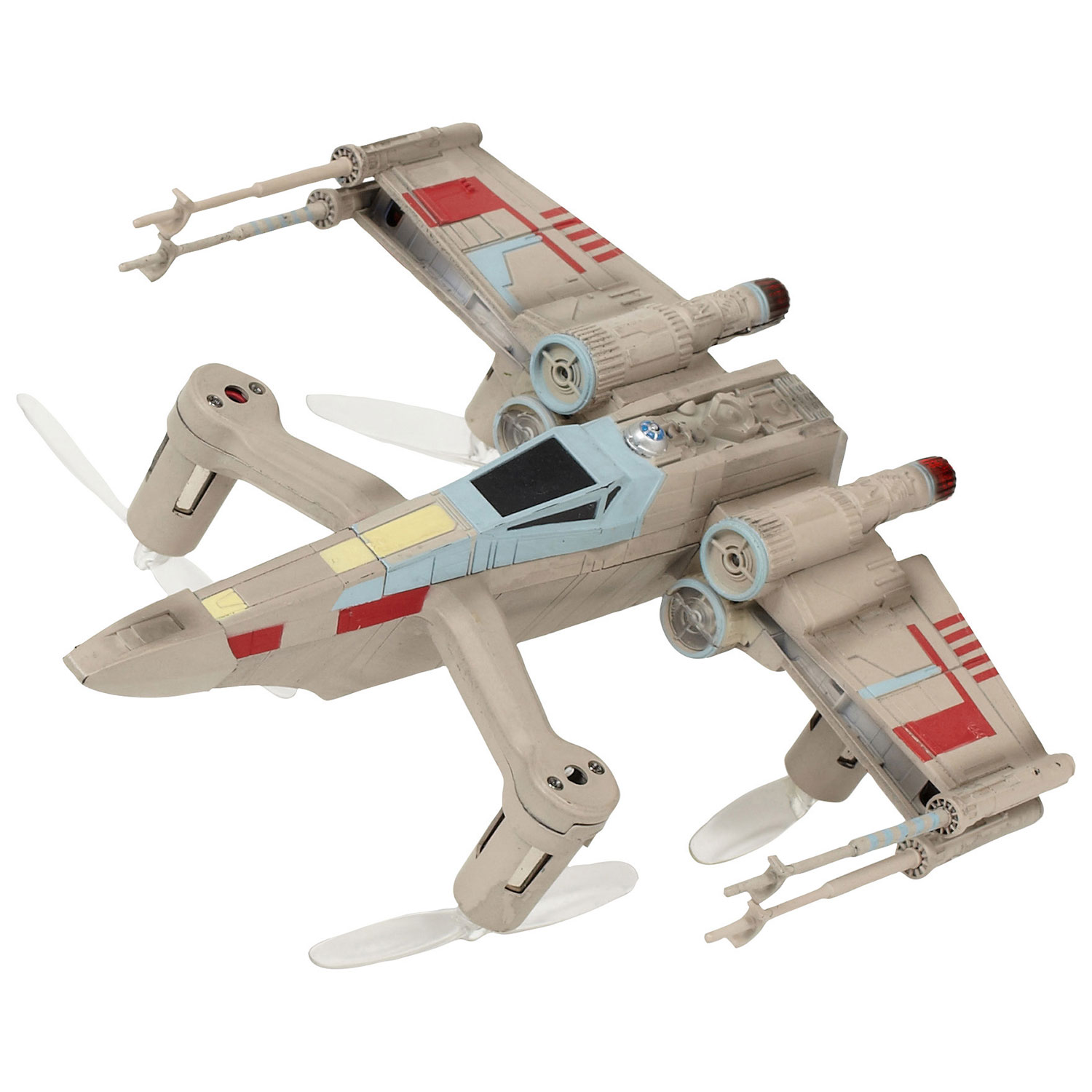 Think you’ve got what it takes to be the next Luke Skywalker or Poe Dameron? If you’re a real drone hot shot, you’re going to love what I’m checking out today! It’s the Propel Star Wars X-Wing Battling Quadcopter Drone, and I’ve been having an absolute blast with it. If you saw my review of Propel’s Speeder Bike Drone from a few weeks ago, you certainly won’t want to miss this, because this time around I’m checking things out from a whole new perspective. With these Propel Star Wars drones, there’s simply too much cool stuff going on to fit everything in to a single review, so today I’ll be coving several of the things in greater detail that I was only able to briefly mention in the Speeder Bike review. This means that things like the Propel Battling Drones App, the laser tag/dogfight game, and the stunt flying that these Propel drones can do will be getting a lot more attention than they did before. Keep on reading for the next chapter in my Propel drone story. Since there are so many different features with these Propel Star Wars drones, I must beg forgiveness if I omit one or two—there’s just so much to keep track of. Among my favourites are the 3 speed settings that make this drone super easy to fly whether you’re a beginning or experienced pilot, the built-in barometer system that provides altitude stabilization (keeping you to a height of no more than about 2 metres, or 6 feet, at all times), and the fact that the X-Wing can do some serious barrel roll stunts to either the left or the right. Other features include a top speed of 35 miles per hour (just over 56 km/h), various lights and sounds from pretty much every component of the overall product (that’s the packaging, the hobby grade controller, and the drone itself), and the auto takeoff and auto landing features (which I really should have included among my favourites). In any case, the Propel X-Wing pretty much has it all. This drone is super detailed to look like its real Star Wars original, it comes with 2 lithium ion batteries instead of just one (each should give you approximately 6-8 minutes of total flying time), it has a fast charger for quick 30 minute charging sessions, working battle cannons for playing a fun laser tag/dogfight game with up to a dozen of your closest frenemies, and it’s even been hand painted and comes in a special edition numbered collector’s box that serves as a beautiful display pedestal. What more could any Star Wars fan ask for? Testing the Propel Star Wars X-Wing Battling Drone was every bit as much fun as you might expect it to be. When I had the Propel Speeder Bike here, I did all of my flying in the woods (trying to recreate that Endor speeder bike chase look), meaning I had to engage the most basic flight mode with the altitude limitations in place. This time around, however, I was much more out in the open where I could really see what the X-Wing could do. I was very impressed with the speed of this thing… perhaps a little too impressed. You really want to get yourself out into a nice big open space if you want to really go, because this thing can go fast and will quickly run out of space if you don’t have much of it to begin with. Still, it’s generally quite easy to keep things under control, and the tricks are super easy with the X-Wing as well because all they require is the simple press of a button for the drone to flip automatically. It’s a pretty cool thing to watch. One of the coolest aspects of the entire Propel Star Wars Battling Drones family, though, is the freely downloadable Propel Battling Drones App. What a great way to enjoy your drone on a rainy or windy day! I basically sat back and flew a virtual version of my drone without ever getting off the couch, and I honestly had just as much fun doing that as going outside and flying the real thing (it was safer too!). It’s actually a lot like playing a video game, only it’s meant to make you a better pilot. There are 34 different training missions you can fly to develop all of your piloting skills. My favourites were the target practice games where you get to fire your laser cannons to try and take out the targets. It’s great practice for playing the real life laser tag game with friends. If you want to see what some of this stuff looks like in action, be sure to check out my embedded video review, where I include plenty of screen capture footage of a couple of my training missions. I also learned a few more details about the laser tag game this time around. It seems that the lasers don’t fire in a narrow beam as we’re used to seeing in a Star Wars movie. They actually come out in the shape of a cone to give you a better chance of a hit. The instruction booklet basically states that as long as you’re within about 3 metres of your target and are generally facing in their direction, there’s a pretty good chance of getting a hit. Once you receive a hit, your drone will wobble briefly or go slightly off course before you regain control. This will happen the first 2 times you are hit, but the third hit will down you, causing your drone to enter into the auto landing sequence and thus taking you out of the game. Of course, it’s my understanding that you can almost immediately reenter the game if you wish. It’s also cool that the Battling Drones App can keep track of some of these stats for you. However, since I’ve only had one drone at a time available, I haven’t been able to test out the laser tag game for myself. Still, it sure sounds like lots of fun! The final thing I just want to quickly show and discuss is the extremely nice hobby grade controller that comes with the Propel X-Wing. This time around the controller is in a beautiful white colour scheme, but it’s still got all of its amazing features like the built-in battery hatch screwdriver, the extendible smart phone holder, the cool Star Wars sounds, buttons for everything under the sun, the ergonomic shape that’s comfortable and easy to hold, and a whole heap more that I tried very diligently to show off in the attached video review. This controller is really top notch, and I found that the drone was highly responsive to every control input I gave. In fact, that goes both for the real life X-Wing drone as well as it’s virtual on-screen counterpart within the Battling Drones App. All up, this drone/controller combo is just about as impressive as it gets, and I really had a great time testing it!

If you didn’t see my video review on the Propel Speeder Bike Drone from a few weeks ago, don’t just watch the following video of the Propel X-Wing Fighter, watch both. Each video is so different and covers such different aspects of these drones that by watching both together you’ll really get a bigger picture of what these Propel Star Wars drones are all about. Just hit that big red play button to begin: I’m sure it’s difficult to tell, but I really love these Propel Star Wars Battling Drones! They definitely fall within the realm of reviewed products that I would actually buy myself. Since I got to test 2 different models this Fall and really enjoyed both, I’m pretty undecided as to which I’d ultimately choose. I’ve also heard that Propel is coming out with a Millennium Falcon drone at some point in the future, and the TIE Fighter also looks amazing, so the waters just keep getting muddier and murkier. Honestly, if you’re a serious Star Wars fan and can afford more than one, I say why not? They can all be displayed together on their beautiful light-up pedestals, and you can just sit back and stare at them all day while flying their virtual counterparts with the hobby grade controllers. But, if you must choose just one, you really can’t go wrong no matter which you pick. They’re all highly detailed, nicely hand painted, and have the exact same features going for them. Just choose the one that most corresponds to your favourite Star Wars movie ship and you’ll probably be happy with your choice. May the Force be with you!