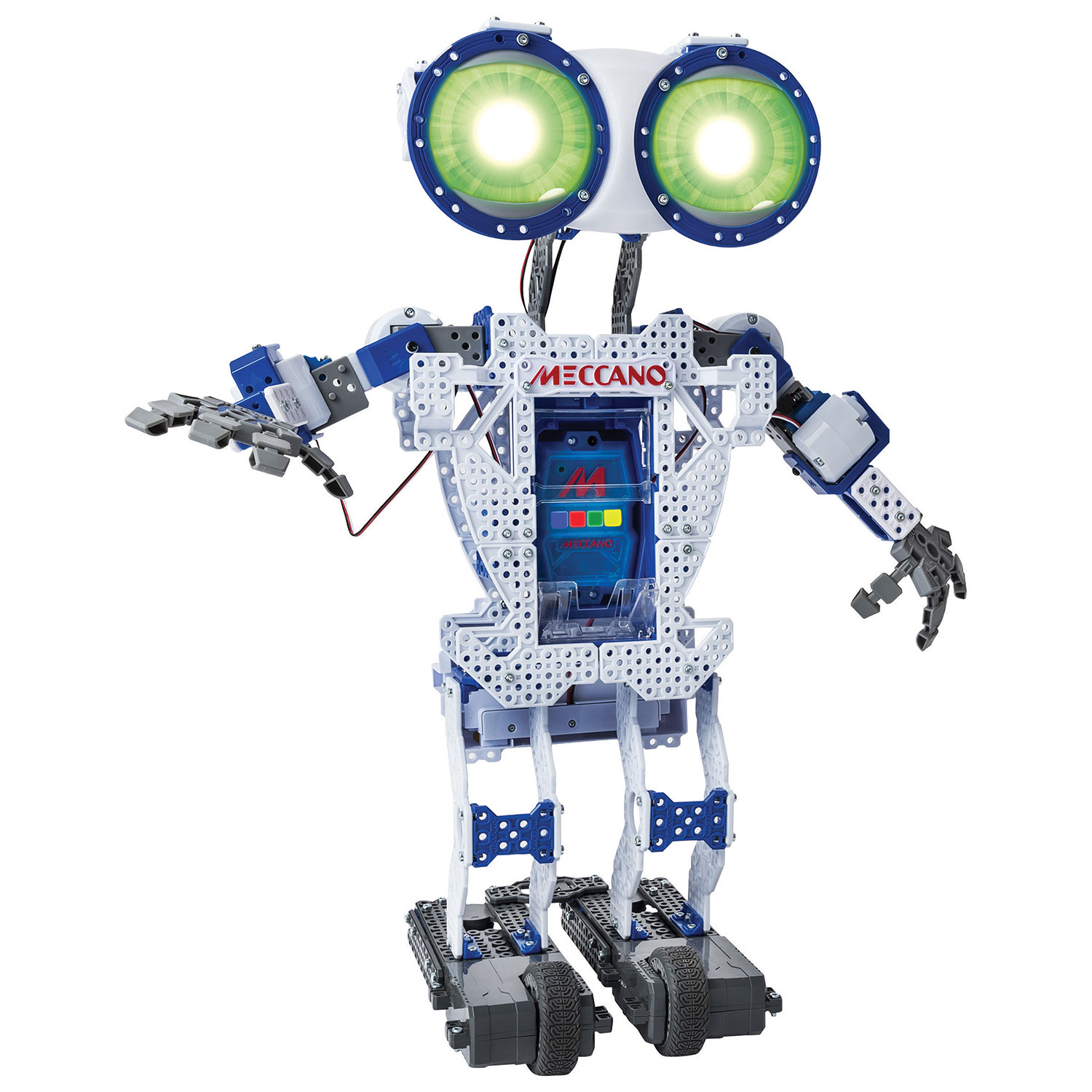 Today I examine the Meccano Meccanoid 2.0 Personal Robot. This fun, interactive robot is the tiny mechanical friend that you build yourself, and then you get to play with him in a multitude of different ways. If you’re familiar with the original version of mini Meccanoid, it may interest you to know that this year’s version has a number of significant improvements. These range from aspects of the build process (this year’s version having only 497 parts, for instance, whereas last year’s small Meccanoid had 600) to new preprogrammed features (like the ability to tell fun stories). Keep on reading if you’d like to know more! The first thing I should mention about the mini Meccanoid 2.0 is that he’s intended for kids ages 10 and up, and I think that this is quite reasonable in terms of his status as a building toy—he is rather complex, and may not be fun for some kids below 10 years of age. However, from an end user perspective (one where kids just give their Meccanoid commands and interact with him), I think that those much younger than 10 could easily play with and enjoy this fun robotic toy. Possible ways of interacting with Meccanoid 2.0 include issuing a specific voice command, playing with him via the freely downloadable Meccanoid App (which works with both Android & iOS based devices), or programming & storing a LIM (Learned Intelligent Movement) that you can then have Meccanoid play back at any given time. This last feature involves physically moving Meccanoid’s limbs around as the LIM is recording; his servos effectively have muscle memory. And you can even record sound as part of the LIM recording, so you can have your Meccanoid wave his limbs about as he gives a highly animated speech (Meccanoid may have something of the dictator’s personality in him). Of course, before you do any of these fun things, you’ll have to make sure that your Meccanoid is fully loaded with 4 D Cell batteries—the big boys! This is because mini Meccanoid 2.0, unlike his significantly taller and even more complex XL cousin, does not come with a rechargeable battery pack to run on. So you may want to keep that in mind when deciding which Meccanoid 2.0 version you prefer. The entire build process for Meccanoid 2.0 took me somewhere in the 3-4 hour range. I wasn’t exactly timing the build, but it was relatively fun and not nearly as tedious as building the XL version. The instructions this time around were more clear than with the bigger bot, and I think that this is mostly due to the fact that the little Meccanoid is far less complex overall. For instance, Meccanoid 2.0 XL has over 1000 different parts to assemble, whereas mini Meccanoid 2.0 has less than 500. The larger bot also has 8 different servos that you must build yourself (not including the 2 in his feet that arrive pre-assembled). Mini Meccanoid 2.0 only has 4 servos to build (other than those in his feet), so there’s a whole lot less of everything (wires, connection points, etc) to add to the confusion. Of course, while this makes the mini Meccanoid much quicker and easier to build than the XL version, he’s also got a whole lot less articulation with which to impress you with his brilliant dancing and kung fu moves. Meccanoid 2.0 XL features 2 head/neck servos (one for side-to-side movements, and one for head tilt) and one extra servo in each of his shoulders (for forward and backward shoulder movements) that mini Meccanoid 2.0 does not have, meaning that this little bot is somewhat limited when it comes to articulation. Of course, this little guy can still do most of the same cool things that the larger Meccanoid can do. Included in this list are voice commands like “Tell me a joke,” “Teach me something,” “Exercise,” and “Shake my hand.” Should you choose to break out the Meccanoid App, you’ll have options there too. For example, you can use the Ragdoll Avatar feature (pictured at right) to program a series of movements (or sounds) for your Meccanoid to act out. This feature is very similar to programming a LIM movement, only you do it by manipulating the limbs (or feet, for turning) of a tiny Meccanoid avatar on your smart phone’s screen. Once you finish recording the “code” for your Meccanoid to follow, you can have the real bot do the actions you’ve programmed. In this way, Meccanoid 2.0 serves as a STEM toy, because he’s actually teaching children some important lessons about computer coding & programming. Of course, if you don’t want to use the Ragdoll Avatar feature, you can always place your phone in Meccanoid’s chest and have him use its built-in camera as an eye with which to watch, and then mimic your every movement. This is because Meccanoid 2.0 uses bluetooth to establish a connection between app and robot, which is actually pretty impressive when you think about it. 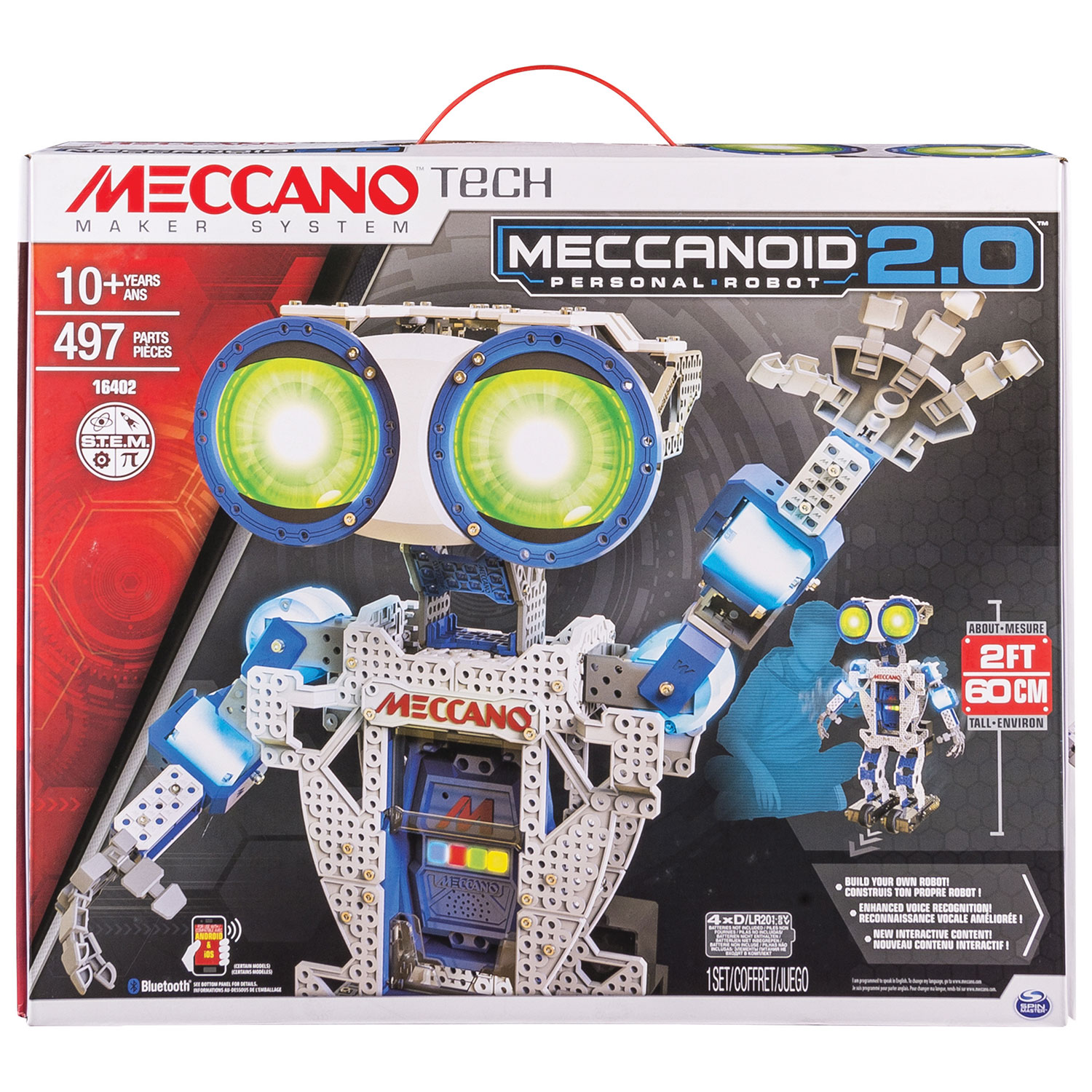 One problem that I sadly had with my Meccanoid was that there was some kind of an issue or ailment that for quite some time prevented me from using him to his fullest extent. I was eventually able to troubleshoot the problem, but for a while I could only use my Meccanoid in his “Drone” mode, meaning I could program and play back a LIM movement, but not much else. Giving him voice commands was not possible during this time. I believe that the issue was a short in the wire running from Meccanoid’s LEDs to his Meccabrain. Unfortunately, if Meccanoid can’t make it all the way through his various systems checks, he informs you that there’s a problem and won’t really go any further in his main “Robot” mode—the one with nearly all of his best features. This could be something to keep in mind when considering getting a Meccanoid 2.0: if you encounter a physical problem (such as the failure of a servo or some other part to properly connect to the Meccabrain), it pretty much disables your bot completely. If all you can do is use your Meccanoid in Drone Mode, you’re missing out on a good bit of the fun. Still, if you have better luck with your Meccanoid than I’ve been having with mine, your child is sure to have a blast with this fun & friendly robot!

Please take a look at my video overview of this year’s mini Meccanoid 2.0:

I found the smaller version of Meccanoid 2.0 to be considerably easier to build than the twice as tall XL version, and with less than half the total parts to deal with, I think that this is the better option for kids at or below the lower end of the recommended age range for this toy. Building this Meccanoid may well be too much for those below the recommended age range, but I do think that kids in that 7-10 range can still enjoy playing with him if their parents help with (or fully complete) the build. The entertaining jokes and stories he tells, along with his dancing and other physical antics, are sure to entertain kids of pretty much all ages—provided you can get everything working properly. Overall, I like this mini version of the Meccanoid quite a bit, but his use of D cell batteries is a serious drawback. I found that my rather cheap D cells lasted for no more than about 2 hours of play time, and that’s just a shame. It could be that a more expensive brand would last much longer, but, then again, maybe you can find some rechargeable D cells and save yourself some battery expense. In any case, Meccanoid 2.0 is one cool robot that’s worth a serious look!

To learn more about Best Buy’s selection of Smart Toys & Robotics (including both versions of this year’s—and last’s—Meccanoid), click on the link and visit the site. Happy hunting!