There’s a new mirrorless camera in Fujifilm’s lineup, the X-H2, and it comes with new surprises inside, along with two new XF mount lenses.

This launch follows the X-H2S, another Fujifilm mirrorless camera that came out in July 2022. They bear similarities beyond just their respective names, which I’ll touch on here, but the the X-H2 is new in a number of respects. The key spec for the X-H2 is the 40.2-megapixel X-Trans CMOS 5 HR APS-C sensor, a backside illuminated one that prioritizes resolution above all else. The “HR” stands for “high resolution”, whereas the X-Trans HS sensor in the X-H2S camera stands for “high speed.” Basically, the X-H2S is better suited to burst shooting and fast focusing, while the X-H2 offers greater detail and the ability to record video in 8K.

This is also the first X-Series camera to feature something called “Pixel Shift Multi-Shot.” This nifty thing captures 160-megapixel images for increased detail and cropping. It does this by shooting 20 frames at a time, and shifting the sensor slightly to repeat the process. You end up with one big DNG RAW image that you can process in Lightroom or another similar program. In contrast, the X-H2S doesn’t have Pixel Shift Multi-Shot.

Like the X-H2S, this camera will be able to automatically detect animals, vehicles, and other objects because of the X-Processor 5 AI capabilities. There are up to 425 autofocus points, with phase detection going beyond what the X-H2S can do.

Bear in mind, however, that the X-H2S doubles the burst rate, so while it can shoot at a whopping 40fps, the X-H2 is limited to 20fps, owing to the sensor’s size. On the bright side, literally, shutter speeds via the electronic shutter increase by 2.5 stops, meaning you can shoot up to 1/180000 of a second. That makes it easier to shoot with a wider aperture in bright conditions, like a sunny beach, for instance. Fujifilm used the same body to construct the X-H2, so apart from the different name on the front, they are very much alike. The LCD screen, viewfinder, memory card slots, in-body image stabilization, battery type, menu system, and even the strap are the same.

The purposes between them diverge mostly on the video side. The X-H2S may not be able to shoot in 8K, like the X-H2 can, but it does 4K at 120fps, which the X-H2 can’t. To take advantage of the higher speeds in the X-H2, you may have to consider a CFexpress Type B memory card. There is a UHS-II SD card slot as well, but the CFexpress can read data faster.

Fujifilm also announced two new lenses for its XF mount, which will be easily compatible with the X-H2 (and X-H2S). The first lens is the XF56mm f/1.2 R WR, what the company describes as a “mid-telephoto prime lens” that could work as a portrait shooter or for everyday photography. Its very wide aperture also applies to a variety of shooting conditions and situations. The second lens is the GF20-35mm f/4 R WR, more an ultra-wide model offering a slight zoom in focal length.

The new X-H2 will become available in October 2022 but you can already pre-order it at Best Buy. Make sure to also check out all the latest Fujifilm cameras and gear available now. 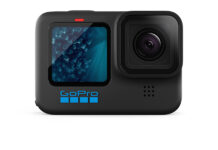