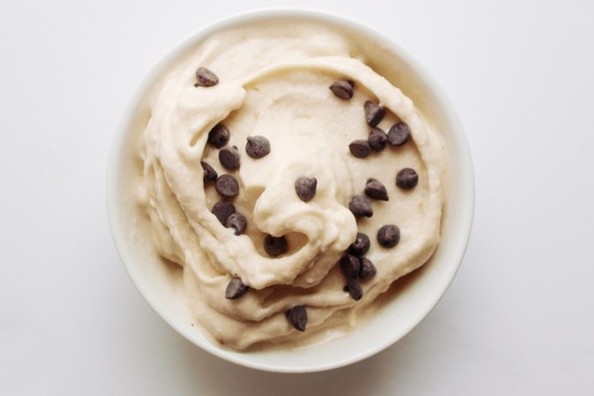 When it comes to summer desserts, ice cream has always been number one. Way back in the day you may have watched your Grandparents churning ice cream by hand in an old wooden bucket, and a lot of people have a great childhood memory of sitting outside in the sunshine eating ice cream with their family.

It’s the perfect summer refresher, and although it’s a lot of fun to head out to your local ice cream stand for ice cream, it’s even more fun to make it at home. There are a lot of different recipes that appeal to families, from vanilla bean to bubble gum, but there aren’t that many recipes out there that appeal to grown ups.

It’s easy to make alcohol flavoured ice cream, and you should have no problem whipping some up the same way you make ice cream in your own ice cream maker. If you want your ice cream to have more of a kick to it, you’ll have to follow the methods found in a cool little cookbook called Ice Cream Happy Hour.

Because alcohol has a lower freezing point, it can be hard to add a lot of alcohol without altering the state of your ice cream. The creators of Ice Cream Happy Hour have found a way to get around that, so it looks the same as your favourite ice cream but it’s got quite a kick to it.

You can also find a few rules for adding alcohol to your ice cream by visiting Seriouseats.com. They’ve got steps for any type of alcohol, and its interesting reading for anyone who wants to experiment with ice cream this summer.

To get you started, I’ve shared a few alcohol flavoured ice cream recipes you can try this weekend. If you’ve got kids be sure to label the container in your freezer and keep it up and out of reach because these are 100% grown up ice creams. 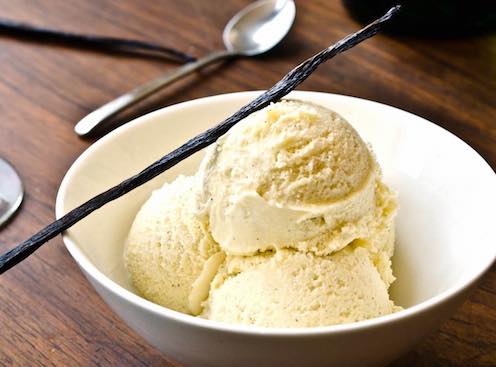 From seriouseats.com, the Scotch brings out the flavour of the Vanilla Bean, and because you don’t add that much alcohol, the consistency of the ice cream stays smooth and creamy.

In a heavy saucepan, bring cream and milk to a bare simmer. Stir in vanilla bean and seeds, cover, and let steep for one hour. Remove bean, wash away dairy, and set aside to dry. Spent bean can be added to a jar of sugar to make vanilla sugar.

Whisk together egg yolks and sugar in a bowl until well-combined and light in color. Slowly pour yolk mixture into dairy mixture, whisking well to combine. Cook custard on low heat, whisking frequently, until it thickens, coating the back of a spoon but leaving a clean line when swiped with a finger.

Strain into an airtight container, then stir in vanilla extract and Scotch. Add salt to taste. Chill overnight, then churn the next day according to manufacturer’s instructions. Eat immediately as soft-serve or let firm up in freezer for two to three hours. 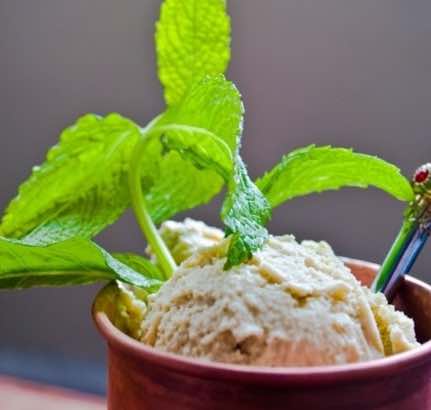 I love having a Mint Julep when I go to Disneyland. There’s something so refreshing about that specific drink, and when I made this ice cream, the flavour reminded me of that drink. I’m not much of a bourbon drinker so I’ve made this recipe without it, but I’ve had friends who have tried with bourbon and they’ve said it has a nice little kick. Photo and recipe from seriouseats.com.

Bring cream and milk to a simmer in a medium saucepan, stirring frequently. Stir in mint leaves, cover, and remove from heat. Let mint infuse for 2 hours at room temperature.

Remove mint leaves, pushing against them in a sieve to draw out all their flavour. In a small bowl, whisk together egg yolks and sugar until lemony in color and thickened, then whisk into dairy. Cook custard over low heat, stirring frequently, until it coats the back of a spoon and a finger swipe leaves a clean line. Stir in bourbon and salt, then transfer to a container to chill overnight.

The next day, churn ice cream according to manufacturer’s instructions. Serve immediately as soft serve or harden in freezer for two to three hours. Let ice cream soften for ten minutes on counter before serving. For a stronger bourbon kick, pour a spoonful of bourbon over ice cream just before serving. 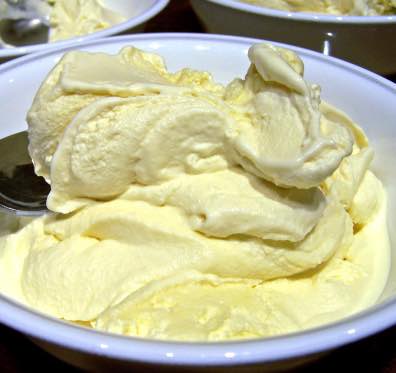 From the Ice Cream Happy Hour cookbook, this is ice cream with a kick. Where other alcohol-flavoured ice cream has approximately 5 tablespoons of alcohol, this ice cream has 2/3 cup of Vodka and 2/3 cup of Kahlua. They were able to get it to freeze by adding gelatin, so if you’re vegetarian or vegan you’ll have to find a substitute for that ingredient.

Make the custard: Combine the milk, heavy cream, sugar, and salt in a medium saucepan over medium high heat. Stir to dissolve the sugar. Heat until the cream mixture is steaming, but not boiling. In a medium bowl, whisk the egg yolks to break them up. Whisk the egg yolks while slowly pouring a half cup of the hot cream into the yolks until incorporated. Whisk in another half cup of the hot cream. Now whisk the egg yolk-cream mixture back into the pan with the rest of the hot cream. Set the pan on medium-high heat and stir constantly (with a whisk or a spatula – just be sure to get the edges of the pan, too) until the custard thickens enough to coat the back of a spoon. Remove from heat and strain the custard through a fine-mesh sieve. Chill the custard over an ice bath and then refrigerate until completely chilled. Measure out the vodka and the Kahlua and refrigerate. Give these at least 8 hours in the refrigerator or overnight.

Booze up the custard: Pour the cold water into a small bowl and sprinkle the powdered gelatin over it. Let it bloom (sit) for 2 minutes. Scrape the bloomed gelatin into a small saucepan and warm over low heat. Make sure the gelatin is completely dissolved. Whisk the chilled vodka and Kahlua into the warm gelatin. Strain out any lumps. Stir the gelatin mixture into the custard. Churn the custard according to your ice cream machine’s instructions and then freeze the ice cream.

If you’re planning a summer party, these are definitely recipes you’ll want to try out, and if you have an alcohol-flavoured ice cream you’d like to share, please post it in the comments below. Here’s a few kitchen gadgets I use when creating ice cream at home.