I have naturally curly hair, which I love. But it’s sometimes the luck of the draw when it comes to whether it will be a good hair day or a bad one. Straightening always yields the same results, so it’s a safer bet if I want to look my best for a special event or evening out. Needless to say, I have experience straightening my hair for years. So, I was excited to try out a few hair care products from Lunata, including the Lunata Beauty cordless Styler Plus+ hair straightener.

What is the Lunata Cordless Styler Plus+? I had previously reviewed the Belisa by Lunata cordless hair straightener, which is effectively a step-down version of this model. The two share many similarities, including 1-inch titanium plates, cordless operation with USB-C charging, rapid heat technology that can heat them up to max level in about 60 seconds, a wide temperature range, and the inclusion of a heat-proof sleeve so you can bring it with you or pack it away in carry-on or luggage right after using it.

The key differences come with the specs. The Styler Plus+ has a more powerful 5,000 mAh battery compared to the Belisa’s 4,000 mAh battery, which yields extra operating time per charge, bringing it up to 45 minutes (versus the Belisa’s 35-40 minutes). It also features Works While Charging (WWC) technology, so even if the battery is dead, as long as you can find a power outlet, you can use as a corded hair straightener. The Cordless Styler Plus+ can also get hotter for those with extremely kinky hair that need maximum heat to get that pin-straight look: it goes up to 450°F versus 420°F with the Belisa, while both start at 200°F. These upgrades are reflected in the slightly higher price.

The Lunata Cordless Styler Plus+ comes in either white high gloss or black matte (the colour of my review sample).

Using the Lunata Cordless Styler Plus+ I followed my usual hair straightening routine to test out this straightener, with the only difference being that I charged it up first. This is something I don’t usually have to do with corded hair straighteners but a welcome extra step considering it means I can move about freely while styling.

After washing and towel drying my hair, I added some hair straightening oil and blow dried my frizzy mop until it was dry to the touch. I turned on the straightener and by the time I had brushed out my hair and sectioned it off, it had reached my desired temperature of 420°F. I started with the bottom, underside layer of my hair and worked upwards, layer by layer with sections of hair a few inches wide for each pass. The straightener moves smoothly along the strands thanks to the titanium plates, with visible steam coming from it as the extremely high temperature worked out the curly and wavy kinks. The Cordless Styler fully charged in under an hour. Unlike the Belisa, the power and up/down buttons to select the temperature in 10° increments are located on the outside of the straightener, and there’s no switch at the bottom to lock the two sides in a closed position. This makes it slightly awkward to select the temperature, as you either have to hold the straightener closed while doing so, place a finger on the underside to hold it level (be careful not to slide the finger up and touch the hot titanium plate), or have one side of the unit click and clack up and down as you repeatedly press to get to the temperature you want. I do prefer having the buttons on the outside versus the inside with the Belisa. But it also means if you hold the straightener too high on the shaft, you could accidentally tap the buttons while using it, turning the temperature up and down without realizing it. (Note that this didn’t happen to me so it might be an unfounded concern.) This straightener, however, does have a neat feature called Works While Charging (WWC) which, as the name implies, means it can be turned on and used while it’s charging, plugged into the wall like a standard corded hair straightener. The protective heat-proof sleeve is handy, allowing you to place the straightener inside even when it’s still hot (don’t forget to turn it off first, though!) You will feel a bit of the heat through the sleeve, particularly the open slits on either side, so be careful if inserting it right after having just turned it off. With the sleeve, you can pop the straightener into a backpack, purse, or carry-on luggage right after using it and head out in a rush. I do wish, however, that the charging adapter was smaller: it’s quite large which means if you’re taking this straightener on vacation to use over multiple days, you’ll need to bring the charging adapter with you and allocate extra space for it. With that said, if you’re only planning to use in on-the-go here and there, it makes sense to charge ahead of time and leave the adapter at home.

Should you get the Lunata Cordless Styler Plus+?

The Lunata Cordless Styler Plus+ is an elegant and stylish hair tool. The rechargeable battery combined with the heatproof sleeve means it’s versatile enough to use virtually anywhere – from at home in the bathroom or bedroom to at the office, in a public restroom, hotel room – even outside if you really wanted to! And the fact that it works while charging should you be near an outlet and don’t have time to wait for it to recharge is a massive bonus. Most importantly, it works really well. I was able to straighten my very long head of hair after it was blow-dried in about 20 minutes, which is what I would expect from a good straightener. It glides beautifully and the ability to select the desired temperature, toggling up and down as needed using the buttons and digital screen, gives it a more modern feel than the old, ancient hair straightener I have been using for decades.

This model makes sense to grab instead of the Belisa by Lunata I also tested this month if you need the highest temperature possible to work with extra curly or tough-to-straighten hair. If you’re a frequent traveler, the extra operating time per charge with the Styler Plus+ might be worth the extra money as well, as is the ability to use the straightener while it’s charging.

Bottom line: the Lunata Cordless Styler Plus+ is a gorgeous looking hair straightener that does the job it is intended to do, which is you’re your hair equally as gorgeous! But the best part is it achieves this without tethering you to an outlet. Check it out at Best Buy Online. 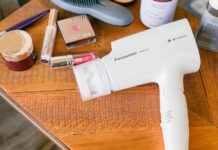 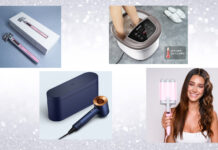