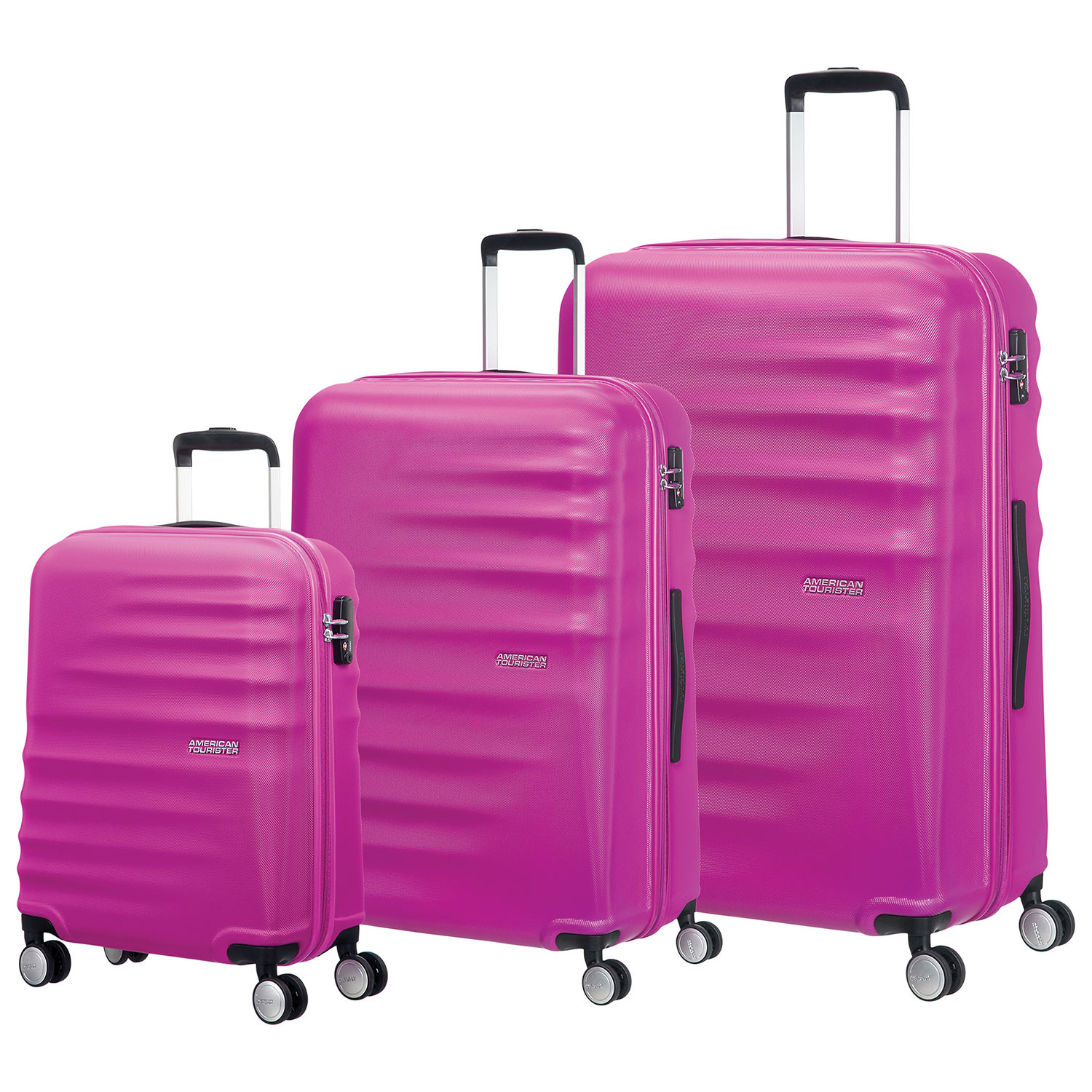 Just because fall is here, that doesn’t mean you’re obligated to carry around only fall-toned luggage. Vacations are a happy occasion, and a bright set of luggage is a great way to get you in an excited frame of mind for your next trip!

There are four new American Tourister luggage sets this season that are just as bright and punchy as you could possibly want your luggage to be. Each American Tourister Wavebreaker set contains three hard side luggage pieces in 29.5″, 26″, and 21.5″ sizes, with four 360-degree spinner wheels and 3-digit TSA combination locks.

Their tough exteriors are made from textured ABS plastic that’s designed to minimize the appearance of scratches, so despite each set’s monochromatic finish, any little nicks and scrapes disappear into the background texture. If you’ve ever had a smooth-finish piece of luggage, you’ll know how quickly they get scraped up during travel. Airport staff never seem to be as careful with luggage as travellers may be, so it’s easy for your brand new suitcase to slide along a surface and return to you a little scraped. 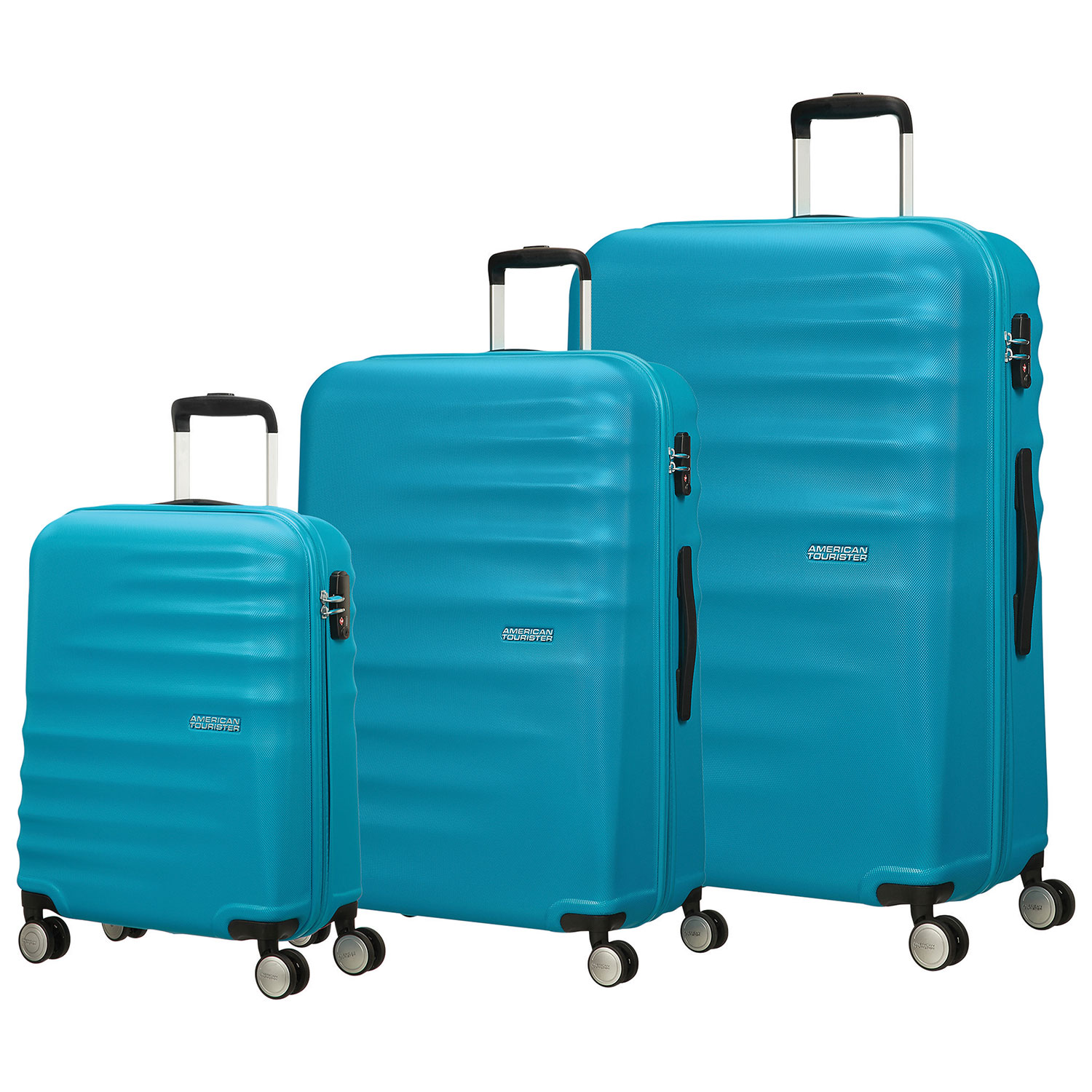 The Wavebreaker pieces also feature extendable handles as well as top and side carry handles (those side-carry handles are a must for “vertically challenged” travellers like myself), and their interiors come with all of the necessary basics: cross straps, mesh dividers, and pockets.

My favourite of the new American Tourister sets is Summer Sky, which features a very trendy shade of teal blue. The set leans a little more aqua than most teal luggage sets, and it’s just so bright and cheerful–it feels like it belongs on a trip to a place with lots of sun and beaches. I know summer’s just ending as this piece is being published, but it’s already so cold here in Edmonton that I wish I was packing up a Summer Sky set right now and heading to somewhere warmer!

All four of these sets mix and match really nicely, but I’m particularly fond of Hot Lips Pink mixed with Sunny Yellow. If you’re looking for two similar-but-different luggage sets for the family, these two mix perfectly. Pastel pink and pastel yellow are two tones that you see paired quite frequently, so their bold counterparts provide a nice offset from the norm.

Hot Lips Pink and Sunny Yellow are easy to spot, too; perhaps even more so than Summer Sky. They’re a good set to choose if you’re going to be separated from your luggage and will need to pick it off of the carousel at some point. 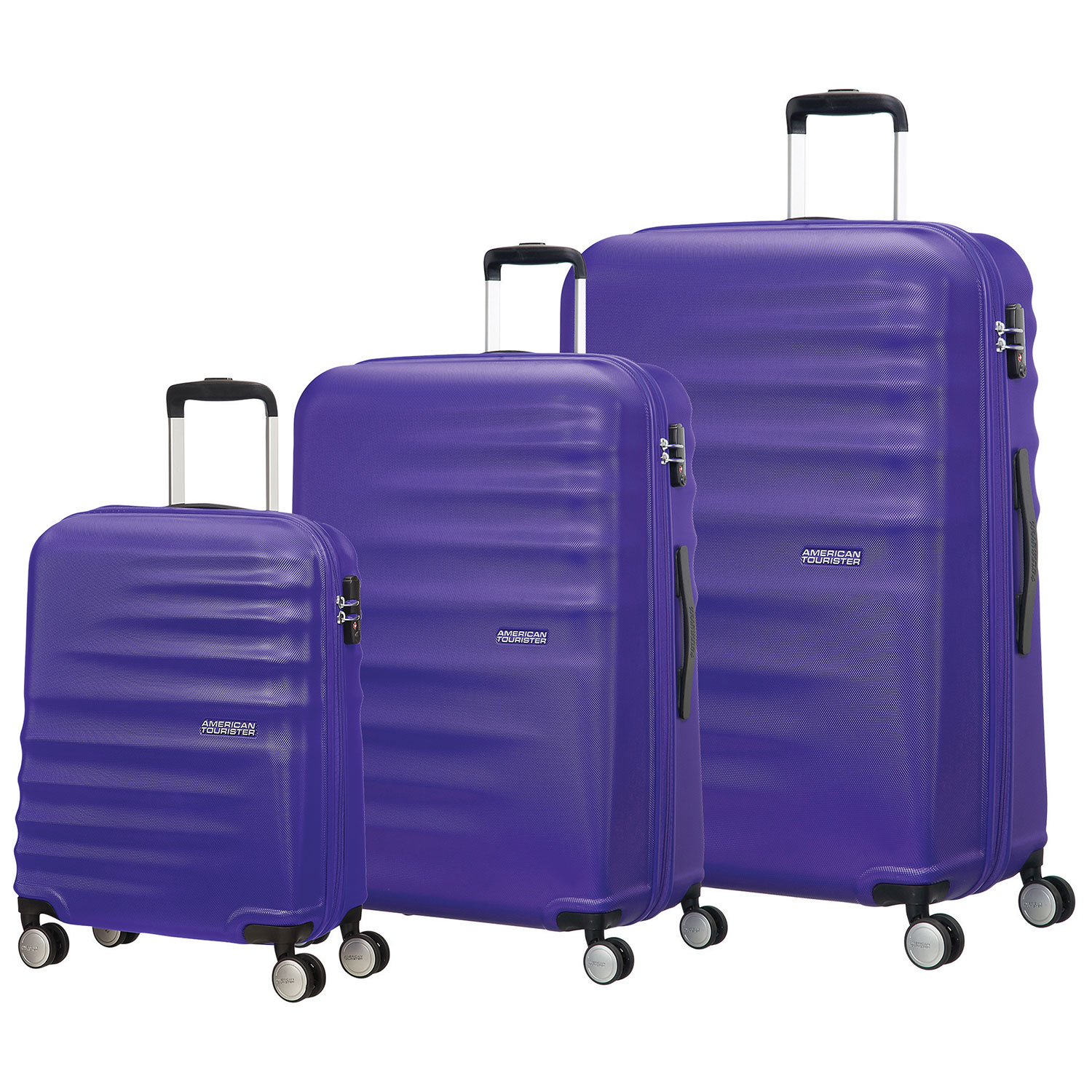 American Tourister’s final bright release is their un-aptly-named Nautical Blue set, which showcases a bold, strong violet tone. Nautical Blue and Sunny Yellow are the more “masculine” of the releases by today’s colour reports, but honestly, these bags aren’t gendered at all–and Nautical Blue is the least so. It’s a completely ambiguous colour that both genders will feel comfortable carrying, but it’s still nice and bright.

I’ve always been a fan of monochromatic luggage, and it’s nice to see that American Tourister has launched this collection with such a wide range of shades. Now all you need is a Canadian flag sticker to cover up the “American” part of the American Tourister logo and you’re good to go!