I was really looking forward to getting my hands on the new Linksys WRT 1900AC wireless router. It’s not just the buzz that’s built up since it wowed attendees at CES 2014 or the black and blue shout to the iconic Linksys WRT54G —the best-selling wireless router of all time. My own wireless network is at a crossroads. As high definition streaming video and a swarm of mobile devices combine with Wi-Fi dead zones to overpower what was once a pretty robust network, I was anxious to find out if the latest generation of Wi-Fi routers could provide the power to make things feel snappy once again. After swapping out my existing router for the Linksys WRT 1900AC review unit, I can say that thanks to the killer performance of this retro-styled rig, Wi-Fi Nirvana is once again within reach.

In a pattern that I suspect has been followed by many homes and small businesses, my home Wi-Fi network is a little behind the times compared to what I would have if I started fresh and has been somewhat patched together over time. The set-up today consists primarily of equipment that’s four or five years old. It’s been supplemented since that initial deployment (for example, a Wi-Fi extender was added a few years ago), but it hasn’t changed a whole lot.

However, what that ancient wireless network has been asked to do has exploded in that time.

It used to connect a few PCs, a few laptops, a PS3 and a few first generation Apple TVs and that was about it. The router supported 802.11n with dual-band (2.4GHz and 5GHz) capability and was more than up to the task of quickly moving data around. 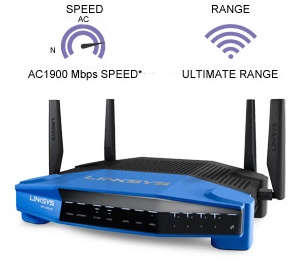 In the past five years, the number of PCs in the house has increased. With three kids reaching the electronics age, additional video game consoles and portable game systems have joined the network along with tablets. Smartphones are always in use, as are Wi-Fi connected iPods. FM radios have been replaced by wireless speakers streaming Internet radio. Running music outdoors to speakers in the back yard requires having a Wi-Fi connection outdoors to control operations. There’s security equipment using the network, Wi-Fi enabled LED lighting and a smart thermostat. The Apple TVs have been upgraded to third generation units that handle 1080p video and two of them are now resident in areas that are historically problematic for Wi-Fi reception.

To make matters even worse, where five years ago ours was the only Wi-Fi network within range, checking for networks from the house now reveals a half dozen competing networks.

The net result is a network that’s lagging. Data transfer is slow, web browsing can be frustrating and when watching videos, pauses for the movie to cache have become far too common.

I had a good experience with the Linksys AC1900 Smart Wi-Fi router I reviewed in February, but had high hopes that the WRT 1900AC’s impressive specs (which you can see in detail on its product page) would parlay into even more impressive Wi-Fi performance. 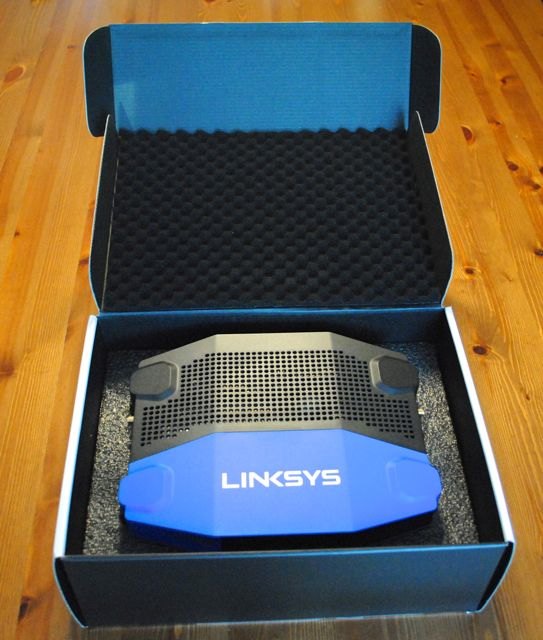 This wireless router looks the part of a Wi-Fi performance beast. Its box is lined with protective foam and once the blue and black plastic is revealed, you get the immediate sense that it means business. It’s not small and it’s not discreet, so if you’re looking for a wireless router than you can tuck on a shelf where it won’t attract attention, this isn’t it.

The WRT 1900AC is black and blue, weighs nearly a kilogram, sports four adjustable antennas, serious air vents and a big power brick. It’s powerful enough that it packs a cooling fan. The entire front face is a series of LED status lights. Subtle, it is not.

I went with the traditional horizontal positioning, but Linksys includes the templates needed to wall-mount the router if that’s your preference.

Set-up and management of the wireless network is a breeze thanks to the online Smart Wi-Fi tools that Linksys provides. If you want more information about the process, check out my AC 1900 review. The difference is that the WRT 1900AC also supports open source firmware and network management tools, so if you like the ability to fine-tune your network using something like Open WRT, you can.

I can say that overall Wi-Fi performance immediately picked up and everyone noticed snappier web page loading, even with a multitude of devices connected. Outdoor reception improved. Even though the router is located in the basement, with a concrete block wall between it and the back yard, from 50 feet away Wi-Fi reception improved from a single bar (barely usable with frequent drop-outs) to a very usable two bars. 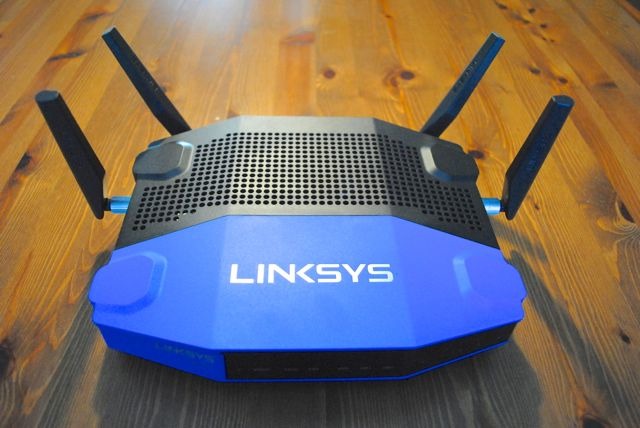 For a very real measurement of how much the Wi-Fi performance improved, I tested video streaming performance at the two network trouble zones. Here’s how that worked out.

I timed how long it took for a 720p Battlestar Galactica episode (hosted on an iTunes library in the basement) to begin playing on an Apple TV, from the time of selection.

In the Family Room (where there are plenty of Wi-Fi obstacles like heating ducts, wiring and cement walls), network signal strength improved from 3/5 bars to 5/5 bars and wait time to play decreased from an average of 44 seconds to 7 seconds.

In the bedroom, two floors above the router, network signal strength also improved from 3/5 to 5/5 bars and the wait time to play decreased from an average of 38 seconds to 10.25 seconds.

This all sounds pretty good, but were there any downsides to the WRT 1900AC?

Well, there was some fiddling required with Xbox Live. That required port forwarding, assigning a static IP address to the Xbox 360 and resolving a conflict between the wireless router and my cable modem. Compared to the AirPort Extreme it was replacing (which was plug and play and required no configuration to work with the Xbox), it was a little hands on.

The other issue was the power brick. It’s on the large side, but the real problem is that the cable connecting the brick to the router was only 48 cm or so long. That makes hiding the brick out of sight a little more challenging than it should be.

But those are minor quibbles.

According to Linksys, the company has sold nearly 50 million units of the WRT54G series router. Based on my experience with the WRT 1900AC, this latest black and blue wireless router has what it takes to live up to that reputation. If you have wireless devices capable of taking full advantage of the new 802.11ac Wi-Fi standard —which I did not— then the results you see should be considerably better. After a lengthy wait since its CES 2014 debut, you can buy the Linksys WRT 1900 AC now at Best Buy.