LG has released a brand new 4K UHD gaming monitor, the LG 27UD59P that may perfect to take advantage of the horsepower under the hood of your gaming computer. The monitor sports a sleek design with some great hardware and software features including AMD FreeSync™ Technology. I had a week to play with this new display from LG and I was not disappointed.

A stunning 27″ display from LG

This new LG 4K UHD FreeSync Gaming Monitor is a stunner. It’s razor-thin at only 8″ deep and possesses a minimalist design: a very small screen bezel and a stand with a very agreeable footprint. At 12.3 lbs, it was very easy to unload from the box, assemble and plug in. The monitor came in three main pieces: the base, the stand and monitor itself. Even connecting the base was intuitive; the base utilized a pair of collapsible wingnut-style connectors to secure the monitor’s stand on the base. This 27″ monitor has a total of four main ports on the back of the unit: 2 x HDMI 2.0 ports, 1 x DisplayPort 1.2 port and the AC port. The display comes with one Displayport and one HDMI cable in the box, so if you plan to connect three inputs to this display, you will need an additional HDMI cable or switcher for that. In my opinion, however, there are very few use-cases that I can think of where three inputs would be plugged in to this monitor. The main reasons? AMD FreeSync Technology is only supported via DisplayPort natively and the on-board speaker for this monitor is not great. One of the most surprising elements of this device came as I was trying to turn it on for the first time. I’ve seen my fair share of displays over the years, so setup and boot is usually a breeze for me. When I looked to power on this new display from LG, I struggled because the controls are not initially obvious. After feeling around the monitor for what seemed like an eternity, I finally came upon the control knob.

Right below the LG logo near the bottom-centre of the bezel is a very small circular nub about the size of the eraser on a number 2 pencil. This button/knob is the only physical input on the device. With this button, you’ll control the power, inputs and settings with the help of a straight-forward, circular on-screen menu that matches the design of the button itself. Consolidating the controls to one input fits the monitor’s design and after a very quick adjustment period, worked well. This new monitor from LG also sports a very simple mechanism for rotating the display between portrait and landscape modes. If you like to code or have a chat client/music playlist open at all time, it is very simple to do with this monitor. Simply tilt the monitor up at a 45-degree angle, turn the screen on its side and re-angle the monitor. The feature would have been perfect if the screen had an integrated locking mechanism to indicate that you’re perfectly straight. The most important question you have is likely: “how does this monitor look and sound?” I’ll summarize by saying: “looks great.” This monitor runs natively at a 3840×2160 UHD 4K resolution. I tested this device with my PC and my Xbox One S; my PC ran content at 3840×2160 and my Xbox One S up-scaled 1080p content to run at 4K resolution. Video and gaming content looked sharp while the 5ms GTG response time and 60Hz refresh rate contributed to a smooth picture. Physically, the panel also supports a 178-degree viewing angle. If you’re sitting perpendicular to your monitor, you will still be able to see the picture.

Under the hood of this LG 4K UHD FreeSync Gaming Monitor were two technologies that I specifically wanted to call out: OnScreen Control 2.0 and Black Stabilizer. If you’re interested in managing settings that would typically be managed with a physical button through PC software, look no further than OnScreen Controls 2.0. When downloaded via LG’s website, you can control the picture presets, brightness/contrast and other settings via an app. It’s a nice-to-have that I have never experienced before in a PC display. This LG 4K UHD FreeSync Gaming Monitor also utilizes a technology called Black Stabilizer. According to LG, this technology adjusts the darker parts of a scene while gaming to allow for greater visibility. Although I did not notice specific instances of “well-lit darkness” produced by this display, it had great contrast. I had no trouble playing through darker sequences in Warframe, Hitman or Forza Horizon 2, for example. Finally, this device also has presets for different types of gaming experiences like first-person shooters and real-time strategy games called Game Modes.

You have no doubt heard about AMD FreeSync Technology since it debuted in 2015. This APU/GPU tech reduces communication delay between your computer’s processor and display giving you the smoothest possible image. This “adaptive synchronization” technology reduces artifacting and screen tearing.

However, you can only access the AMD FreeSync Technology through the use of native DisplayPort. This limits which options that can access this technology to computers with FreeSync compatible GPUs. This means that using an Xbox One X, which runs a custom AMD GPU, will not allow you access AMD FreeSync Technology. Your content will look great in 4K UHD on the Xbox One X and LG 27UD59P, but you won’t be able to take advantage of AMD’s synchronization technology unless you have a gaming rig with a newer AMD GPU. Just check before you buy to see if this added technology will benefit you.

If you have a computer with a FreeSync compatible GPU, you owe it to yourself to consider this LG 4K UHD FreeSync Gaming Monitor. It has a very small footprint and possesses some great hardware and software features that complement the crisp high resolution picture. 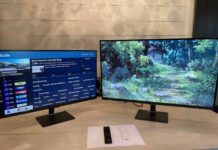