If you’re looking for a more inexpensive tablet capable of doing more when applying the right tools to it, Amazon’s latest Fire HD 10 may be the right fit.

The key is the word “add” because, as is, the Fire HD 10 is extremely similar to the 2019 version. Amazon’s Fire tablets run on a fork of Android, meaning that the base is Android, but the look, feel and access isn’t the same. If you’ve used one before, you may already know that, but if you haven’t, read on to find out how you might be able to squeeze out more of this one.

Amazon stuck with the same 10.1-inch screen and 1080p HD resolution, only made it 10% brighter this time. The MediaTek processor gets an upgrade to octa-core with a better clock speed, plus extra RAM to put it at 3GB total. There’s supposed to be a better front-facing camera, though it’s a very modest 2-megapixels. And battery life should stretch a little further, up to two hours more than before.

The colour options are slightly different, as are a few design points. Amazon reduced the size of the bezels surrounding the screen, which is why this one is shorter in portrait mode. It is a tad bit wider, though also slightly thinner. Not to mention a little lighter to hold, too.

Amazon is also emphasizing two other key aspects to set this year’s Fire HD 10 apart: productivity and kids. There’s a keyboard attachment you can buy separately if you want to turn it into a mini-laptop. It doesn’t have to be that specific keyboard, mind you, because the tablet supports Bluetooth keyboards, generally. Microsoft Office comes pre-installed to help make the case that you can use it to get work done.

The Fire HD 10 Kids Pro and Kids Edition are different devices altogether, but they are in the same family. The Fire HD 10 also has its own Kids app with the option to sign up for Amazon’s Kids+ monthly plan (there is a free trial for the first month). It provides access to “thousands of kid-friendly books, videos, educational apps and games.”

Some things have remained the same. You still get a USB-C port, headphone jack, stereo speakers and a rear camera. It doesn’t take great photos, so it’s not a reason to buy this tablet. Fire OS is kind of like Android, but not really. That distinction always factors in to what you can do with a tablet like this, though you do have a way to expand on that. More on that in a bit.

As is, I found a marginal increase in overall performance compared to the last model. Ever so slightly faster and smoother, the 2021 Fire HD 10 functions as well as a device at this level should. It’s hard to tell if the screen is exactly 10% brighter, but it does manage to do better than the 2019 model can. Amazon added a split-screen mode that works decently to multitask with two apps—again, sticking to that idea of being productive.

Ultimately, though, it’s the software that makes all the difference. Amazon’s Appstore lacks the depth of the Google Play Store, leaving out a number of Android apps you could use on any other tablet running on that platform. A lot of the most popular ones are easy to find. Netflix, Disney+, Spotify, TikTok, DAZN, Peloton, and more are already there. Unfortunately, many others are missing.

It’s obvious Amazon wants the Fire HD 10 to promote its own apps and services. Hence, Prime Video, Audible, Kindle, Amazon Music, Games and Alexa are so front and centre. The Silk browser is fine, though not the same as others, like Firefox, Chrome or DuckDuckGo. Those limits shouldn’t get in the way of what could be a better tablet once you enable it to bring in more apps. Getting more out of the tablet with Google Play

Sideloading the Google Play Store onto the Fire HD 10 is actually much easier than you may think. The streamlined process opens up so much of what you can get on Android, making for a nice value add. Though there are exceptions, it means you can use the apps you can’t otherwise access on this tablet.

That has pretty far-reaching consequences when you think about it. For instance, I could read comics on Marvel Unlimited, or eBooks on Kobo’s app. I could browse on DuckDuckGo, listen to Apple Music, or edit photos in Adobe Lightroom. Not every single app may work like it would on a typical Android device, but you should be pleased with the results.

Sideloading the Play Store does offset some of the other limitations inherent in Fire OS. For one thing, version 7 is based on Android 9.0, not on Android 11 or 12, which are the current versions on smartphones and tablets.

It used to be that you couldn’t use Alexa with Fire tablets in Canada, but that’s no longer the case. With this one, you can set up Alexa on other devices, call anyone with an Echo product, set alarms, reminders, timers, and play content on any smart home speakers within your home network. It’s a nice integration, especially if you’re into the Alexa ecosystem, though not all that different from the Android app. Amazon raised the battery life of the Fire HD 10 another two hours for a max of 12. And it can go that high with mixed usage, unless you watch a lot of video, which may bring it down around 10 hours total. That’s solid battery life for a tablet of this calibre. Even though Amazon believes it can be a productivity device, you’re more likely to use it to consume content. It can last long enough to binge on any show you’re interested in watching. Music, books, audiobooks, endless browsing—it’s all there.

While the Fire HD 10 is serviceable enough on its own, sideloading the Play Store is what really makes it feel complete. At least that’s how I looked at previous models, and this iteration hasn’t changed my perspective. When a tablet is limited in what its own software can provide, you tend to look at other options. That could be buying a different tablet altogether, or giving this one a shot with the extras thrown in. I would just be weary of considering it to be a real alternative for getting work done. And if you’re looking to get something for your kids, go with one of the Fire Kids models instead.

The Amazon Fire HD 10 is available now in either 32GB or 64GB variants in either black or denim. 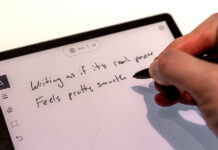