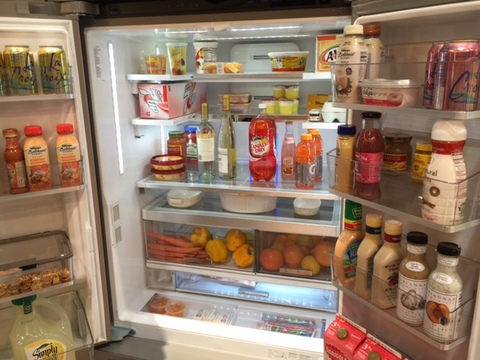 There was a lot of talk about the home of the future at CES this year. Whirlpool took that theme and made it a reality, laying out what it calls the Kitchen of the Future for visitors to its booth at the Consumer Electronics Show. In addition to looking into a crystal ball, Whirlpool also showed off some new appliances and unveiled new concepts that it thinks will change the way people manage their homes today.

Whirlpool unveiled a new refrigerator which it calls its Smart French Door Refrigerator. The idea behind this fridge is that it resembles a pantry instead of a typical refrigerator; with smart storage, easy organization, and a very easy layout that allows instant customization without having to remove everything from the fridge and rebuild it.

One of the biggest complaints about refrigerators is that the small stuff is easily lost. Whirlpool tackles this problem by creating what it calls ‘infinity slide shelves’ which line the perimeter of the fridge. These shelves have center panels which can slide out of the way, basically forming a ledge around the edge of the refrigerator where the small stuff can stay safe and visible. Whirlpool has spaced the shelves based on common sizes of food packaging so that yogurt, sauce jars, 12 packs of pop cans, wine bottles, or egg cartons will fit perfectly on the edges and stay safe and visible. 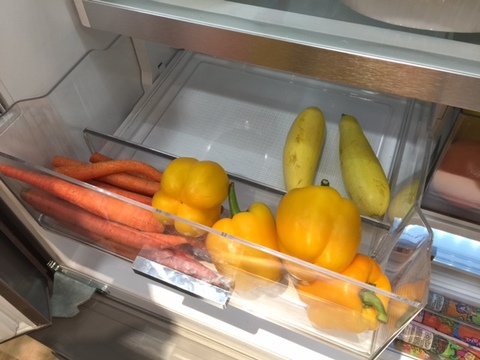 This refrigerator also has what Whirlpool dubs ‘asymmetrical crispers.’ These are drawers in the bottom of the fridge that have a small pocket-like space in the front of the crisper where you can store long produce like carrots, cucumbers, or celery easily and out of the way, but then towards the back of the big and deep drawers there’s enough space to hold large boxes of lettuce.

There are small sliding door compartments in the bottom of the fridge that will hold very small items (imagine cheese portions or deli meats) and keep them visible and within easy reach near the front of the door. The fridge also has LED lighting all over the interior which makes everything very easy to spot in an instant.

Getting back to our future home concept, this refrigerator is also smart; it can send you an alert to let you know if the power has gone out, as well as when it’s time to change the water filters inside the fridge. Having a party? There’s a ‘party mode’ on the refrigerator which, with one tap, allows you to accelerate ice production and temporarily drop the temperature inside the fridge because it knows the doors will be opened and closed more often. 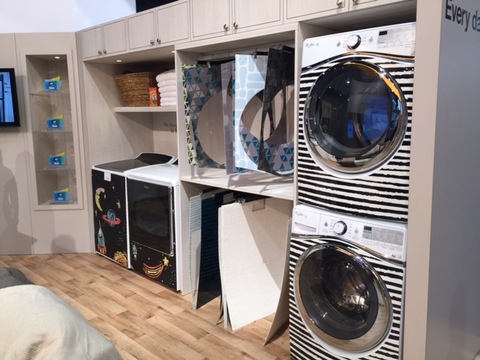 Whirlpool showed off a new set of appliances that can hold a month’s worth of laundry soap inside. I found that innovation super convenient; no need to add soap every time, you just keep doing laundry until the appliances tell you they are running low.

Whirlpool has also introduced what it calls its ‘every day care project’. The program allows families to automatically donate money to Habitat for Humanity; every time a load of laundry is washed, an alert is sent, and a small donation is automatically sent to charity. The company representative at the booth told me this was about “helping families care for others while they are also caring for themselves.”

Whirlpool was also showing off a brand-new concept that I found quite brilliant. You can now get special printed skins for your washer/dryer, allowing you to change the colour, style, or design of your appliances just by applying a vinyl decal. There were a number of prints and patterns on display, but presumably the options here could be endless. This gives you a new level of personalization beyond just choosing between black, white, or stainless steel.

The kitchen of the future 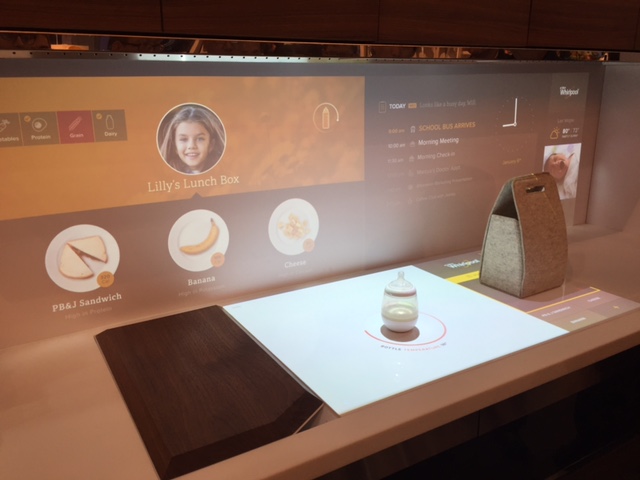 This was one of my favourite parts of the Whirlpool booth. The company set up what it calls the kitchen of the future. The concept simulates a day in the life of a dad caring for his family in a smart futuristic kitchen.
The Whirlpool smart kitchen integrates a virtual display into the backsplash which will show and share information about the family’s daily schedule. In Whirlpool’s vision of the future, the countertop is also smart, and knows when something has been placed on it, what it is, and what it needs; setting your coffee cup down on the surface triggers warming until you pick it up again (or until you depart, which the smart kitchen will also know). Baby crying and needs to be fed? Just pop the baby bottle onto the surface as well, and it too can be heated up to precisely the right temperature; as the smart kitchen will recognize that it’s a baby bottle and prevent overheating.

One of the other neat things about the special countertop, is that it’s able to sense when items are placed on it, and can display information about nutrition on the backsplash. The concept shown here was that if you were packing a lunch for your child, for example, the kitchen will recognize which items you’ve added to the lunch bag, and suggest where some nutritional holes may be, allowing you to add or exchange certain foods to make sure your child is having a balanced bagged lunch at school.

The “Kitchen of the Future” idea was neat, and though it’s totally conceptual at this time, the Whirlpool representatives told an amazed crowd that it is not actually that far from becoming reality.

That’s part of the fun of CES.  While some displays may tease your with futuristic just-out-of-reach technology, there’s also plenty of new innovations you can get your hands on today. See what’s available now from Whirlpool, and watch for what’s coming our way soon.

For more from CES as the show comes to a close, follow me on Twitter and Instagram to get the latest updates in 140 characters or less!