It was a scorcher of a summer in a lot of places in Canada. If you don’t have air conditioning, you know how hard it can be to keep cool on burning hot days and during nights that don’t cool off. Dyson Pure Cool HEPA Air Purifier & Fan is a pricey option that can not only help keep you cool, but it can also remove toxins from your air. Is it right for you? I had the opportunity to test out this fan and purifier in my home so read my review and then decide.

If you’ve seen the previous iteration of this fan/purifier you may think you know what you’re getting, but there have been some upgrades to this new model.

New filters: Now find a HEPA filter for particle capture and a carbon filter for gaseous pollutant and household odours.

Dyson fan is a marvel of design

There’s no doubt the allure of a Dyson product is in its design. Dyson gear is made to look like—and operate like—nothing else. Their fans, like their vacuums and the Dyson Supersonic hairdryer, are eye-catching. The Dyson Pure Cool Fan is really nice looking and it definitely matches my home’s modern design.

Bladeless design: does it make a difference?

The fan has no blades meaning the only thing you’ll see is the airflow loop on top, set atop a sturdy swivel base. The air comes in through the base, where the purifying happens. There are several layers of filters (more on that in a sec) which cleans the air of particles, then shoots it out the top to blow across the room and cool you off.

One of the things that I really like about this fan is that lack of blades. The blades in traditional fans pick up grime and dust and other particles from the air, and they collect on the blades. That stuff is getting spit right back at you particle by particle. Cleaning them is an exercise in frustration. This fan means cleaner air, not just because of the lack of dusty blades, but also because of that purification action.

You’ll need to assemble the filters and clip them onto the fan’s base. There are three layers to snap together including a cover, HEPA filter, and an activated carbon filter; each set comes in two halves which you’ll clip together, then clip onto the base. It takes just minutes.

With the fan ready you can power it up on using the included remote control, or set up the Dyson app to give you smartphone control. You just need to pair the fan, which takes just a minute and you’ll get all the same control you can with the remote, plus monitoring and pollution stats at a glance.

What kinds of pollution are measured & filtered?

The Dyson Pure Cool HEPA Air Purifier & Fan can skim several pollutants from the air; things like PM 2.5, PM 10, VOC and NO2, as well as formaldehyde, benzine and ozone.

It captures pollutants with those 360° Sealed HEPA and activated carbon filtersand can snag nasties as small as 0.3 microns.

While Dyson’s fans and purifiers require almost no maintenance, you will need to replace the filters at least yearly, if you’re using it  an average of 12 hours of use per day.

Neither the HEPA filters, nor the carbon filters are washable. The machine will tell you when it’s time to swap them out. There are 10 levels of fan power so you can control the airflow and adjust the breeze to your liking. The fan doesn’t blow air directly at you, as opposed to puffing it more gently in your direction. The result is a more diffused, general cooling effect, as opposed to a strong breeze. It’s nice, particularly at night.

When running on lower speeds, this fan and purifier is quite quiet. Once you start cranking it up, the noise is more noticeable, and more akin to what a regular fan might sound like. At full power, I’d say it’s more noticeably noisy, but it does seem somewhat quieter overall and less clunky sounding in its movements, compared to traditional fans.

You can schedule the fan/purifier to come on when you want via the app, or employ its built in Night Mode to run softly, and with a dimmed display. The remote control is small and light and has all the controls you need. It’s also magnetic and sticks to the top of the fan so it’s always someplace you can find it.

Truly, there’s a lot to like about this fan/purifier. The design is beautiful. The customizable options and settings mean it’s configurable just for you and your room. Plus it seems very rugged and durable. The fact this fan is also a purifier is also a big plus, albeit one you are most definitley paying for.

If there were any downsides to this device, it could be it’s a little on the big side; this model, anyway. It’s also pricey, which is a drawback for many. The filters also require annual replacement and the HEPA filter is listed on Dyson’s website for about $100. Not an inexpensive amount for upkeep.

I think if you’re contemplating this fan to the point where you’re reading this review, you probably already have the budget to afford it, so in that case, go for it. There’s a lot of bang for your bucks here. If price is a concern, then, yes, you can still get cool with a simple fan for much less. 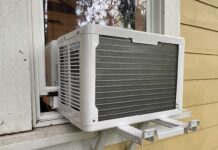 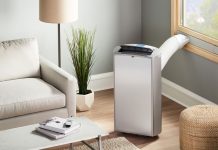 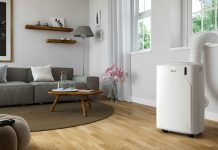