If you love drones, you’ve certainly come to the right place, because today drone giant DJI announced their all new Phantom 4 Drone—the drone that brings improved speed and better control to its popular series of Phantom drones! Keep reading for full details of this amazing new drone, and don’t forget to check out the Phantom 4’s cool promotional video as well while you’re here!

Click here to see all of the amazing drones and accessories available now. The Phantom 4 comes with everything you’ll need to take to the skies (see photo at bottom)! Its main technological improvements, however, lie in its robotics. For instance, this model has better flight capabilities than ever before. Key among them are the Phantom 4’s “smart” capability of being able to avoid obstacles automatically (a feature that’s achieved via a series of built-in sensors). This makes the Phantom 4 a dream to operate, as you won’t have to worry about collisions with inanimate objects like trees and houses. The photo at right provides a visual representation of this feature in action. As someone who often flies drones for review purposes (but claims no piloting ability whatsoever), this is a highly welcomed feature! While the Phantom’s robotics are the true boon here, its included camera has some slight improvements over earlier models as well. These are mainly comprised of a new and better lens, which provides sharper edging capabilities than cameras included with previous Phantom models. 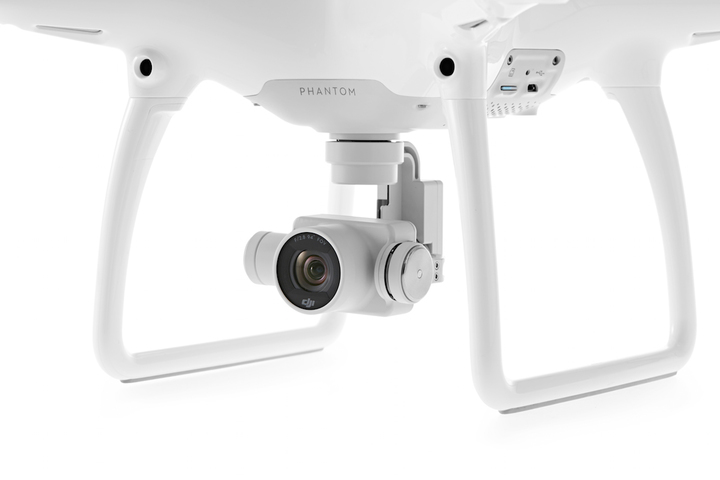 Other great features of the Phantom 4 include its minimal weight (a mere 3.04 pounds—that’s 1380 g with battery installed), it’s maximum speed of 72 Km/h (that’s 44.7 mph), and its (up to) 28 minutes of flight time on a single battery charge (representing a full 25% improvement in this area). It also has a maximum overall range of up to 5 Kms (3.1 miles) in ideal conditions (i.e., an unobstructed area with no radio interference) and a maximum altitude of 19,685 feet (6000m), though for safety this is limited to 400 feet by the Phantom 4’s software. Its camera shoots images in beautiful 4K resolution (at 30 frames per second) and up to 1080p (at 120 fps) for slow motion recording. A reinforced gimbal enhances the camera’s stability for smoother video footage, so you’ll always film like a true pro! Finally, GPS & GLONASS satellite systems continually tell the Phantom where it is. This gives you greater control over your drone, and the drone itself all the data it needs for features like Return to Home. Speaking of the Return to Home feature… The characteristic itself is not new. However, for this model it’s been improved such that the Phantom 4 can now return to you even if there are obstacles in its way. It simply detects and flies around them. With the use of the Phantom 4’s App (available for both iOS & Android devices), you can engage the ActiveTrack System and have the drone track any moving object you wish simply by tapping the image on your smart phone’s screen. This feature is great if you’d like to film yourself engaging in activities such as rock climbing, mountain biking, or, as the fellow in the photo is doing, jogging. Since the Phantom 4 is super light (it’s constructed with a “lighter & sturdier than aluminum” composite core unibody) and relatively small, you can easily take it with you on any such outings. Simply toss it in your backpack and go. You can always fly it once you reach your play destination. It even has an all new Sport Mode for highly responsive control at a whopping 20 meters per second. Use this feature when you’re feeling particularly confident in your piloting capabilities!

For a more complete rundown of all the Phantom 4’s many amazing features, be sure to take a look at DJI’s promotional video, which shows off the Phantom 4 to absolute perfection:

Well, that’s all for now. But remember, this drone is coming soon to Best Buy, so be sure to keep an eye out for it in the very near future. And, as always, think safely first, which includes becoming familiar with the piloting laws in your area and obeying them thoroughly. Happy flying!

Soon I’ll have more details regarding the availability of the Phantom 4. For now you can check out a huge selection of drones at Best Buy