To say this watch is a clone of the previous model wouldn’t be an understatement—at least from the outside. Samsung didn’t mess with the overall form factor, choosing to maintain it, as is, while adding some key pieces to the puzzle under the hood.

It is, in effect, a watch made for an active user, but it’s also stylistic enough to be a casual wristwatch. The key here is that the Watch Active2 is what I call a corrective device, meaning it adds or improves upon what the original model should’ve had to begin with.

Like its recent predecessor, the Watch Active2 maintains its svelte appearance in both 40mm and 44mm sizes. This keeps with Samsung’s attempt to cater to both men and women with designs that feel casual and comfortable all at once. Aluminum (like the one I tested) and stainless steel frames play a part in that, adding some elegance to the overall design.

The rest of the watch is very familiar. The 40mm has a 1.2-inch AMOLED display, which is only 0.1-inches larger than the previous model, whereas the 44mm has a 1.4-inch AMOLED that is the same size as before. The resolution stays the same at 360 x 360 as well, and Gorilla Glass DX+ aims to keep the glass intact and scratch-free.

There are bigger batteries, with the 40mm housing a 247mAh battery and the 44mm going with a 340mAh. Both have the same 5ATM waterproofing, allowing either watch to descend down to 50-metre depths, both in fresh and saltwater.

So, what else is different? The biggest change is the touch-sensitive bezel. Previous Samsung smartwatches used a physical rotating bezel that made navigation feel fluid and responsive. The first Galaxy Watch Active removed the bezel to trim down its size, yet never replaced it with anything comparable until the Watch Active2.

The touch-enabled bezel has haptic feedback to come close to replicating the same experience. It’s not entirely the same, but it certainly makes a big difference once you dive in and start moving through the interface.

Touching this bezel isn’t the same as the physical one. That might seem obvious on the face of it, but you notice it in practice because the cadence is hard to match. There is no way to adjust sensitivity other than to find a pattern with your own finger.

It was hard for me to rely on the touch bezel entirely, so I often mixed things up by also swiping on the screen. It’s hard for me to pinpoint when was the most ideal to do one or the other, and it all started to feel natural after a couple of weeks.

Samsung’s Tizen OS is still the same, clearly built to be accessible and convenient, though few major changes came with this watch. Or at least the ones advertised have yet to arrive. Twitter, YouTube and Google Translate were among the new apps hyped for the watch. During my testing, I never saw any of the three available to download. There were third-party ones that tied into those services, but nothing official. Reviewers in the United States noted using them, but even when I switched regions on the watch and paired phone, I couldn’t get those apps.

I have no desire to watch video on the watch, but translations would be very helpful when facing a language barrier. Twitter could also be useful if you’re active, though I would probably prefer seeing it on my phone screen.

All of this falls under a layout that remains unchanged. Spotify and iHeartRadio remain the two primary music apps, with new features for Spotify that make a big difference. You also get tons of watch faces to choose from, but it’s where the exercise features come in that make this watch what it is. Previously, Spotify worked on Samsung watches as a complement to the phone app. This time, it’s easy to download songs and playlists to the watch directly so you can listen without taking the phone with you.

The process wasn’t particularly difficult, as it required opening the Spotify app on the watch, and then going to Settings>Playback>Standalone to open it up for downloading. After copying over playlists, I tapped Bluetooth Audio to pair with wireless headphones, and that was it—the phone was out of the equation when going to the gym.

The Galaxy Watch Active2 lists 4GB of storage, though only 2.5GB is empty space. Downloading music to the watch cuts into that, as do third-party apps, so you may not be able to squeeze in an entire library in there. What makes this watch compelling is that it does the basics you expect well. It is a smartwatch first, and activity tracker second, but the line blurs so often here. It tracks a range of exercises, with the option to edit which ones take prominence. Automatic tracking is among the best on any wearable I’ve tested to date. The way it pauses when stopping during a walk or workout is only getting better.

By default, the watch still limits you to seeing four exercises on the screen at once, which is why I recommend adding new widgets to include more at your fingertips. If you add others for calories, challenges and leaderboards, you’re widening the circle further.

I’ve never been especially hot on Samsung Health, but I am warming up to it a little more. It lays out data in a user-friendly way, even if it’s not as deep or impressive as other apps are. Sleep and stress tracking also come into play with it. You still have to manually put in the food you eat and how much water you drink.

The heart rate monitor is the same, though Samsung is mum about the blood pressure monitor (BPM) introduced in the previous watch. As I explained in that review, the BPM wasn’t quite ready for primetime. I saw no real difference here, either.

Samsung also says it added an ECG (electrocardiogram) sensor, which is approved in the United States, but not yet in Canada. Not that it matters yet because it’s still in beta and I couldn’t test it anyway. But if it does come in 2020, as expected, it brings a really interesting feature to this watch.

Not surprisingly, Bixby is the voice assistant of choice here. It’s not terrible in the grander scheme, but I’ve noticed that I get more out of the platform when I keep things simple. Weather, alarms, reminders, starting workouts—it’s good at handling those.

It just struggles with everything else. Smart home control is partly predicated on having compatible products, mostly from Samsung. It simply wasn’t the same as, say, controlling smart home devices using Alexa on the Fitbit Versa 2, for instance.

Plus, there’s the array of settings and adjustments made possible through Samsung’s Galaxy Wearable and Bixby apps on the paired phone. The company makes a good effort to educate and teach the platform, so there is that. I just always felt like something was missing when using it.

The Galaxy Watch Active2 works with Samsung and Android phones running version 5.0 or later with at least 1.5GB of RAM. Apple iPhones also work if they run at least iOS 9.0.

I’ll just say it flatly: don’t bother getting this if you have an iPhone. The most you would get are the exercise features, which the Apple Watch already delivers. Nothing has really changed in that regard from the first Galaxy Watch Active to this new iteration.

For non-Samsung Android users, the watch performs better, but again, you have to accept the trade-offs. If you use Google Assistant on your phone, there’s no tie-in with the watch. You would also have to download Samsung’s suite of apps, like Galaxy Wearable, Galaxy Store and Samsung Health to get a fuller experience. Given the relative dearth of Android-centric smartwatches, it may be worth the hassle.

Bigger batteries keep the Galaxy Active2 going longer than before, albeit with similar rules. Use it moderately with limited exercise tracking and you should stretch things out to two days. Once Wi-Fi, Bluetooth, and GPS go to work, along with all the sensors, that drops down considerably. No matter the scenario, you will have to charge the watch on a regular basis.

It comes with its own wireless charger, but also supports the Qi standard on its own, so if you have a charging pad, just lay it down to fill up. You could also use the Wireless PowerShare feature found in the Galaxy S10, S10+, Note10 and Note10+.

In my previous review, I said it was Samsung’s best effort up to that point. The Galaxy Watch Active2 is what the first one should have been from the start. While highly iterative, it just mostly felt like what I wanted to see the first time around. It still appeals to both sexes, and the replaceable band makes it suitable for any situation.

For Samsung phone users, this is the watch to go with. It’s the most seamless integration available, plain and simple. For Android users, the choices are slim, and so, this watch checks off some important boxes.

The Galaxy Watch Active2 is available now in both aluminum and stainless steel finishes in black, silver and gold pink. 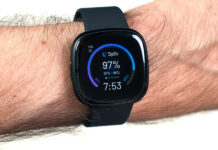