The ASTRO ‘A’ series of headphones are high quality headphones specifically designed for gaming.

It means they clearly started with gamers in mind, and put a bunch of clever heads together to brainstorm the kinds of options we’d like and need. What a startlingly practical mindset, effective too. Shame some other kinds of vendors don’t learn from this example, the folks that run our phones and data as a non specific example. In this case, what it gets you are a set of great headphones that will serve your everyday life just fine, but as a gaming headset it adds a tangible level to the experience. Time was, headphones were just a thing that connected to the computer and put sound near your ear holes. If that sound was balanced, so much the better, but it wasn’t always. Worn down by years of generic ‘office’ headphones in their legions I’ve never put much thought into my personal headphones, took for granted what an investment in higher quality units can do for the listening experience. Which is the primary difference there, one’s just sound, but the other brings you closer to what you’re doing. Aiding in this venture is a little feature called the…

At the heart of these headsets is the ASTRO MixAmp Pro, a mixer, and the reason (if I have it right) ASTRO are able to give the consistent experience cross platform. Control of the sound is given to the player, which, even with a simple two function balance, puts a lot of power at their finger tips. As well as volume, the player controls the game-to-voice balancing and control of four modes Media Mode, Core Mode, Pro Mode, and Sports Mode, so you can find an optimum setting regardless of the media you’re consuming. The extra hardware does mean extra cables and let’s face it, the less wired the better, but this little mixer does look pretty cool. Besides, sometimes you pay for utility, this is one of those times. Powered by Dolby Digital 7.1 the audio is a beast, and functions across all but one of the major platforms, (PC, PS3, PS4, Xbox 360, and XBox One). 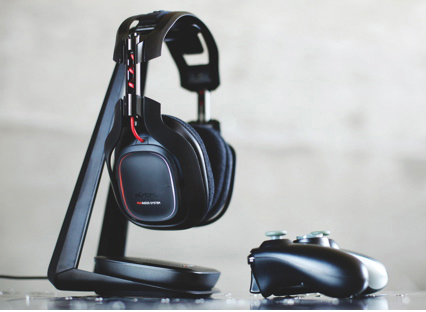 Why start with the big boy, why not work my way up? To be honest, this is where my ASTRO experience began, and its through the ASTRO A50’s my experience has been filtered. I just couldn’t help myself… when I unboxed the lot from their delivery packaging and had in my office three lovely looking options staring back at me… Let’s just say as cool as the entire family is, A50 was definitely the belle of the ball.

I can’t say enough about the comfort of these things, it’s like having my ears held in a pillowy embrace, the whole thing cradling my head with solid construction. It’s beefy though, and might be too bulky for some. On the plus side, these babies boast surround sound thanks to the Dolby digital 7.1. You’re probably thinking ‘of course its surround sound, it’s on your ears’, and yes, ha ha, very clever of you, but there’s more to it than that. When I put them on my virgin ears at the very beginning of this review process, my first thought was of hearing something as if I were in a theatre, or hall. There was a sense of space and acoustics that seems to clash with the amount of headphone you’re wearing, it’s like they installed a pair of tiny pocket dimensions just for your listening pleasure. It gives it that theatre quality, and it’s very good.

The mic is large and flexible, it manipulates very easily owing to its rubbery design, and a simple flip to its upright position mutes your headset. No fumbling with fragile switches or what have you, just a simple flip and she’s done. Built into the headphones is a toggle between three modes ( Media, Core, and Pro Mode), and the mixer itself. I will say that the added options and complexity can leave you trying to figure out where the sound went, fumbling with dials and levers until you find the culprit, but when it comes to sophistication that’s the cost of doing business. The wireless functionality is great, I figure I get about eight hours at a charge, making it your average work day (or, some peoples, not mine). When it comes time to charge again it becomes like any other wired headset, connecting back to the wireless hub which will sit unobtrusively on or near your PC. If you’re the fussy type (I’m not) use the mounting bracket for storage of both the wireless unit and the headset.

I love these headphones. 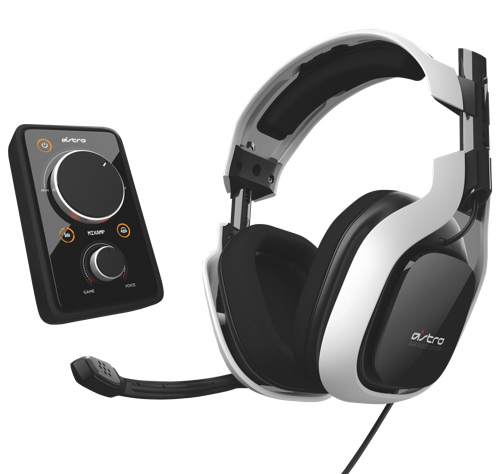 Available in black and white Built with the same sturdy frame as the A50’s, the A40’s are just as comfortable, if a little paired down. It is a wired headset, free of the various knobs and buttons of its bigger sibling, instead It uses the ASTRO MixAmp Pro as its interface. The mic is detachable, but otherwise identical to that of the A50s, same rubber construction, sturdy and flexible. It attaches to the unit solidly, requiring some intent to pull it off again, and rotates 360 degrees. Mute is controlled by a switch at the chest, but it is a pretty chunky device, guiding the hand to it fairly naturally. The listening experience is on par with the A50, it simply lacks a few of the high end features, such as wireless and headset direct control over the mixing and volume. You’ll save a few dollars and still score a very impressive set of headphones. 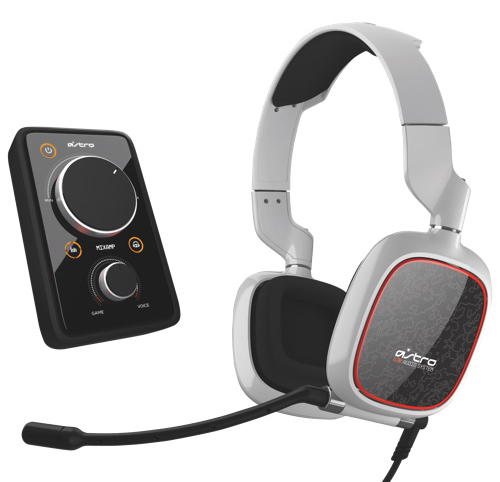 Functioning in much the same way as its two siblings, the ASTRO A30 rocks the same ASTRO MixAmp Pro. The difference this time around is a design change to the structure of the headphones themselves. Where the A40 and A50 sported the same bulkier, heavy duty frame, the construction of the A30 is much lower profile, to its credit. Living as I do with another game-centric human being, it was pretty difficult to be swimming in riches like some headphone Scrooge McDuck and not feel a touch greedy. Being a nerd and into techy things, my housemate showed up almost the minute I had them out of the box, making the same ‘Oooooo’ noises I was. We both had a run with all three, and the A30’s were her unit of preference. Supported by the same Dolby 7.1 game audio framework, the sound quality is every bit as good. They do lose some of that airy theatre sound feeling you get with the larger headphone design, but these still sound fantastic. For me, I prefer full cans that devour my ears, and squat on my head like a technological symbiote, but… you know, that’s just me. The mic operates in much the same way as the A40, but, is more in line with its smaller size. To tcombat the weight of the locking mechanism in the ’40’s they created another that, while smaller, doesnt let go unless you want it to. On the plus side, it’s much lighter, yet still designed with the same spirit of strong construction the bigger lads have, and at the lowest price point, these may be the easiest way for you to get a truly excellent ASTRO sound experience.

Though I have mostly myself to blame for the quality of my listening previously, the Astro ‘A’ series headsets, particularly the A50 is by far the single best headphone experience I’ve ever had. From construction to features to quality of sound, it’s clear a lot of consideration went into the design of all three. Across a range in terms of price point, features and design, it’s really up to you to decide what you value, whichever way you go, A30, A40, or A50, you won’t be disappointed.