Darksiders Genesis is a spin-off prequel to the original Darksiders and introduces the fourth and final horsemen in the series, Strife. The game is developed by Airship Syndicate, which is made up of developers from the first two Darksiders games. 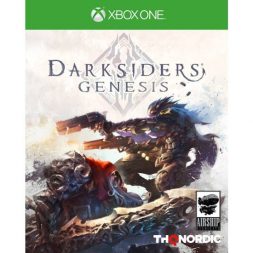 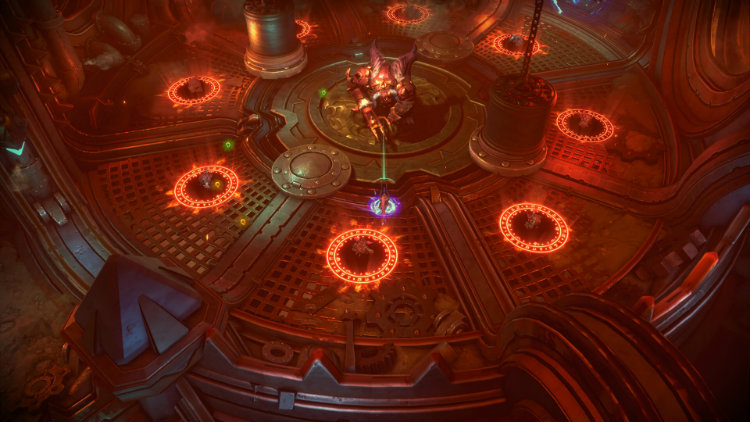 A brand new story exploring the origin of the Seven Seals

Let me start off by telling you just how much I enjoyed the story in Darksiders Genesis. With that being said, I don’t want to give away too much of the story and spoil it for you. So, I’ll do my best to give you an overview of the game’s story and what to expect.

From the get go, Darksiders Genesis doesn’t hesitate in introducing Strife. And, within the first minute of the game’s introduction, it’s made clear that the game takes a totally different direction than previous games. Strife’s Deadpool-like charisma and character shines. As a result, gives off the impression that he is a badass who doesn’t take crap from anyone. 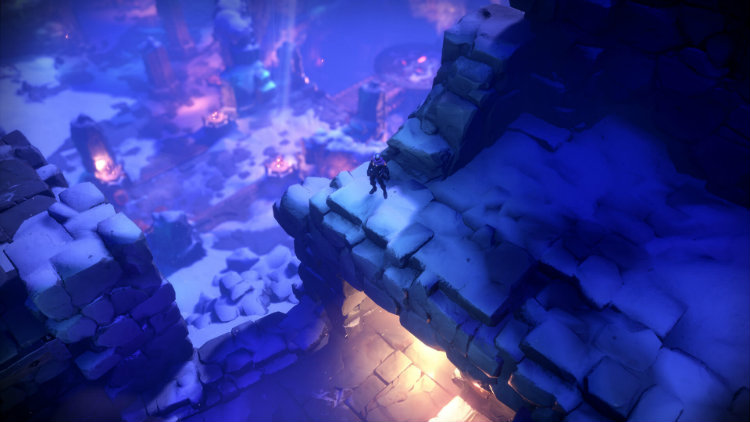 Strife and War have been dispatched by The Council to stop Lucifer’s evil plot. You see, the demon king is looking to upset the balance of power by giving power to master demons throughout hell. Not only that, but Lucifer is on the hunt for the almighty Ember Core, which will give him supreme power over everyone.

The story is full of twists and unexpected turns. The interaction between Strife and War is more frequent than other Darksiders games and thus creates a strong bond between not only between them but the player. However, my favourite part about the game’s story is its conclusion. I literally did a spit-take as the credits rolled. 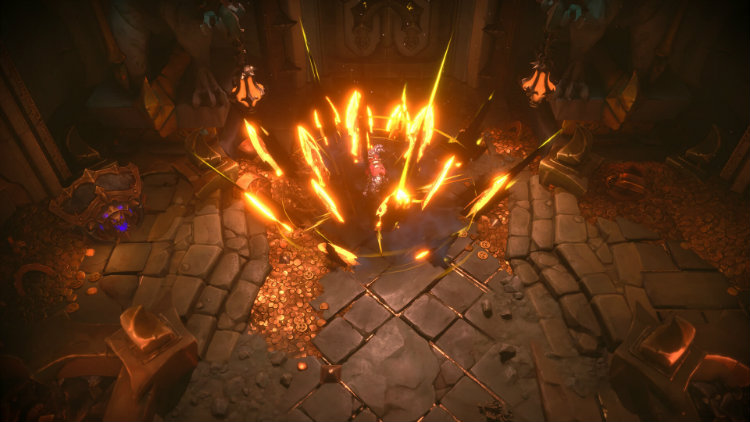 Fight through hell and back

In addition to an intriguing and entertaining story, Darksiders Genesis‘ gameplay is equally enjoyable. As you battle through hordes of demons, angels and whatever else you come across you can instantly change between Strife and War. Each has their own unique play styles and their offensive abilities can easily be levelled up to inflict even more damage on the baddies.

Better yet, as you level up each character, new found attacks are unlocked. In previous Darksiders games it wasn’t uncommon to be overwhelmed by hordes and hordes of enemies. In Darksiders Genesis this isn’t a worry, enemies come in waves from all directions. Not once did I feel overwhelmed or felt like giving up.

By defeating enemies you gain souls and health drops that aid you in levelling up your attacks, increasing your health bar and strength. Exploring the many different worlds in the game can be done on foot and via your trusty horse, which you can call for just about anytime. There are even some elements of platforming thrown into the mix. Needless to say, Darksiders Genesis offers a refreshing change to gameplay that the series badly needed. 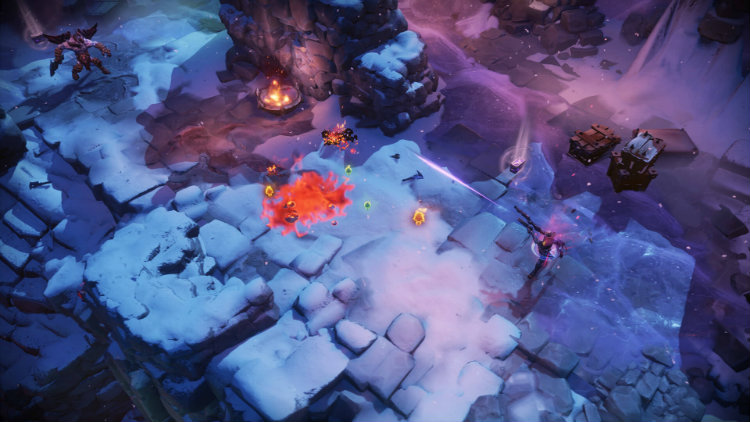 I absolutely fell in love with the art-style, character design and use of colour in the game. All of these combine to give the world a great sense of depth and make things like explosions and gunfire really pop. Furthermore, character animation in particular end level bosses are superbly animated. They really are a sight to behold.

Adding to an already great game is the fantastic voice acting for just about everyone in the game. The jovial banter back and forth between Strife and War can be quite comical at times. Many times I found myself laughing at their conversations and further solidified the brother-like relationship that both Horsemen have between each other.

The game’s aerial camera view is static. So, if Strife or War go behind an object, you see a shadow of the character and at times can make platforming difficult. Luckily it doesn’t happen all that often. 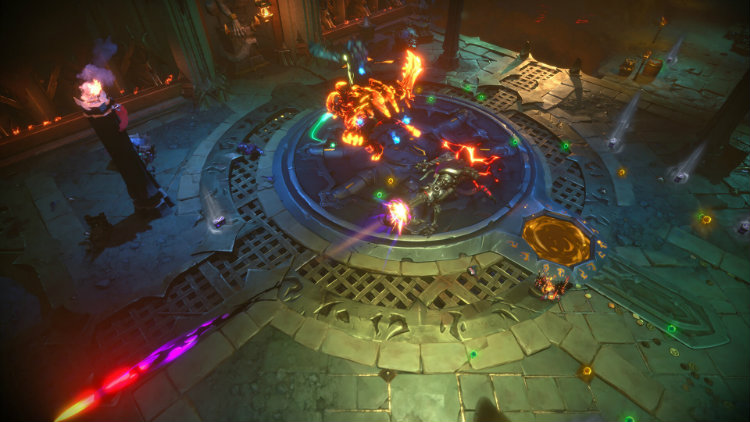 Team up and destroy your enemies

As much as I love Darksiders Genesis as a single-player game, it is even better with multiplayer co-op. As soon as I finished the game playing by myself, I started it again with multiplayer co-op. It made the experience that much better and not one I will soon forget. Being able to share the satisfaction of taking down one of the game’s bosses together or hordes of enemies is second to none.

Both local split-screen couch co-op and online co-op modes are available and are a blast to play. Combining Strife and War’s attacks allows you to wreak havoc on enemies that is ghoulishly satisfying. Multiplayer is activated by visiting the Summoning stones that are scattered throughout each of the game’s 16 levels. Once you activate a Summoning stone it allows you to play co-op story or special co-op missions. 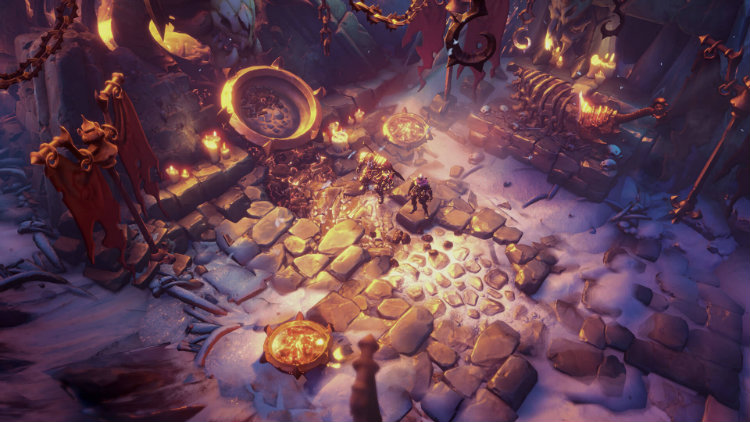 Darksiders Genesis is my favourite game in the series

Darksiders Genesis is a breath of fresh air that the series needed. It is by far my favourite game in the series. The game takes place before any of the three previously released games so no prior knowledge of the series is needed to enjoy. The story is engaging and some of the conversations between Strife and War will have you rolling on the floor laughing.

Gameplay is fun and the ability to switch on the fly between Strife and War allows you to switch up your fighting style against enemies as needed. Moreover, playing locally or online with a friend adds to the enjoyment. If you are looking for a different type of game that is fun to play by yourself and with friends, I highly recommend Darksiders Genesis—you wont be dissapointed.

– Platforming can be frustrating at times due to camera angle